As I mentioned in a previous Tuscan Villa post, it was necessary to give up many "elements" that I wanted to include in the villa construction. Among other things, I planned a fresco on the back wall of the dining room. Fortunately, the dining room had to have a back wall; I didn't need to sacrifice that! And since the wall was there anyway, I could go ahead with my fresco plan. Well, it wasn't actually a plan. I don't really draw, and I definitely don't paint (in the artistic sense.) All I had was a vague idea of gluing a "classic" Italian something-or-other on the wall so that it would appear to have been painted on fresh, moist plaster using water-based pigments. 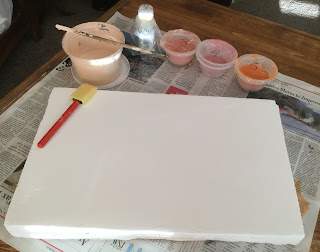 I started with that Exciting Unknown - a "blank canvas," which is actually the back wall of the villa dining room. 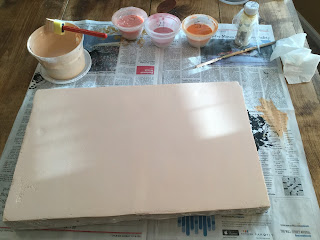 I applied the base color of a pale peach mixture... 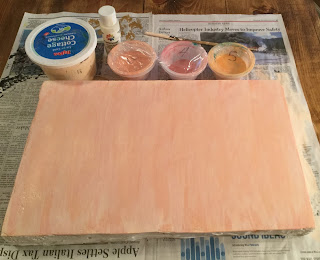 ...and added four washes in various color mixes, drying between each color application. 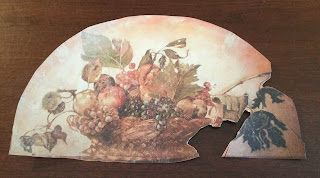 I found this image of a fruit basket fresco that I thought would be perfect for the villa wall. 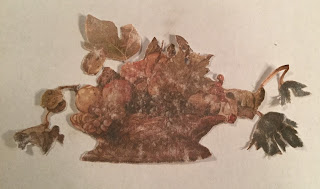 I cut out the basket, which took a long time, and began gluing it onto the wall. It looked ridiculous. Or maybe not ridiculous, but what it looked like was a cut-out fruit basket glued onto a wall. 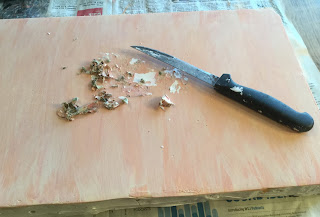 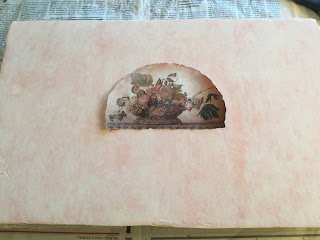 I printed another image and kept the background intact, tearing it carefully by hand so that the edges weren't well defined. I hoped that I could blend the background of the print into the wall by applying paint with a dry brush. I glued the print onto the wall. But somehow I misread my center guide mark and the print was glued on off-center. 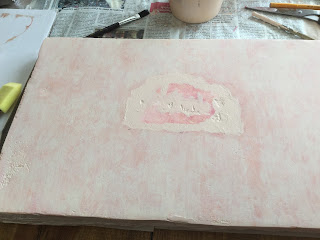 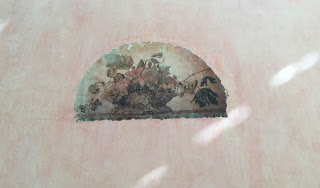 I glued it on again but decided that the whole image was too small for the wall. I increased the size of the image, tore the edges carefully and glued the second print over the first. I dry-brushed some paint around the edges, but it didn't exactly blend into the wall. It still looked like a cut-out, glued-on fruit basket. 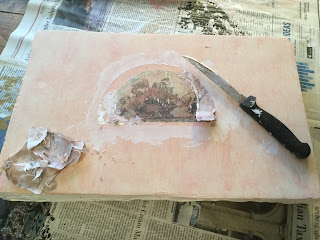 I re-stuccoed and re-sanded the wall... 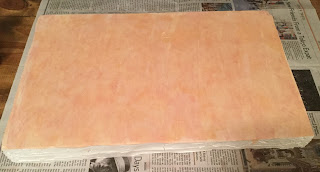 ...and re-painted with all five color mixes. 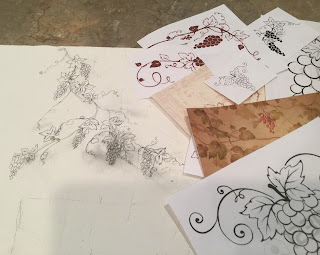 I was going to have to do this thing the hard way. I was going to have to paint something myself. I chose a grapevine, since I already had a grapevine motif on the living room fireplace. But I wasn't quite sure how to draw the stems and leaves, so I found lots of descriptive sketches. I needed to practice making a sketch before I began the real thing. 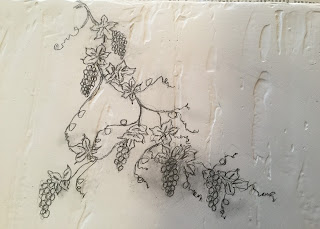 And I hate to tell you that for some reason that I cannot remember, although I'm sure that I had a reason, I drew the practice sketch on the back side of the dining room wall. When I was ready to make the real drawing on the wall, my practice sketch was out of sight on the other side! I didn't HAVE to see the sketch, but I had planned the grapevine's placement on the wall carefully, and I really wanted to be able to refer back to it. Then Modern Technology came to the rescue! 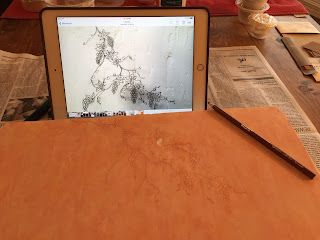 I photographed the sketch with my iPad and had an instant sketch for reference. I used a light brown colored pencil to recreate the sketch. I somehow also poked a sort of hole in the wall. I repaired it with a dab of joint compound and covered it later with the grapevine paint. 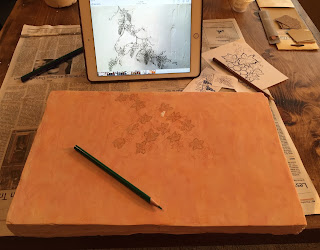 I thought there weren't enough leaves in my first sketch, so I added more. Then I thought that there were too many. But I was NOT going to try to paint them out. The leaves stayed. 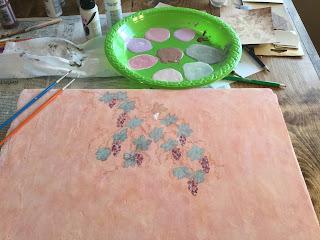 My color palette included various shades of purple for the grapes and what I thought was a mixture of grayish greens for the leaves. 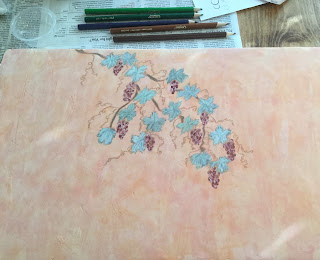 But the leaves looked aqua instead! (Actually not quite as aqua as they look in these photos - but still aqua.) I added more gray to the color mixture, and the leaves turned even more aqua. There's obviously something mysterious about mixing colors that I don't understand. 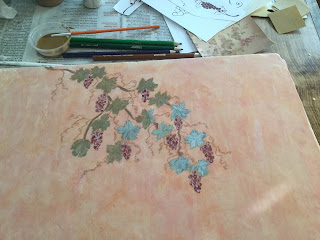 When I added a Golden Tan color wash to the aqua leaves, they turned green! The mystery deepens. 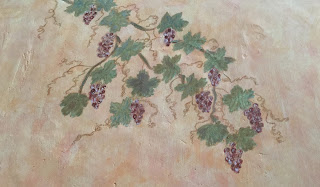 I was feeling some satisfaction with my grapevine until I realized that the grape clusters seemed disproportionately smaller than the (many) leaves. 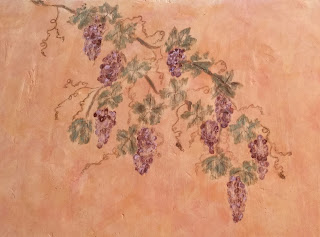 So I enlarged the clusters of grapes and sanded the grapevine lightly to "age" it.

And the Fresco is Finished! 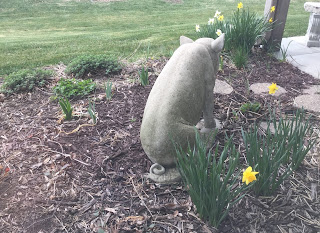 After all that effort, I need a change of pace. I think I'll go outside and help Wilbur stare at the daffodils. April has arrived in all its budding beauty; I hope that it's a beautiful and productive month for you all.    HAPPY SPRING!