The Last Back Wall - and Beyond!

And so I've reached the last back wall of the Villa del Vigneto; at least, it's the last back wall on the lower level. Although there was some delay (not my fault) and some procrastination (entirely my fault) the completion of the villa's lower level could not have been timed better. Now I'll start a new level of the villa as I begin a new year. There's a sort of rhythmic beauty at work here! 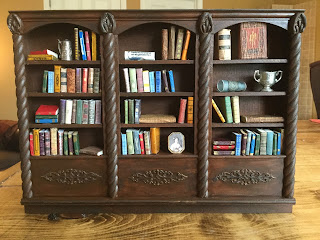 This bookcase for the living room was the first intimation I had that the hard-to-reach back walls of the villa might pose a problem, although at the time, I was more concerned that the bookcase might not fit through the living room's front arch after the ceiling was installed. (See the July 31, 2016 blog post.)  I didn't realize the full extent of the problem until much later, when I was ready to install the kitchen ceiling. At any rate, the "contrived" bookcase was the first piece of furniture that I had ready for the villa living room. 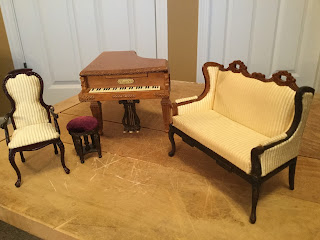 I chose this settee and chair for the living room and later decided that I didn't like the light wood finish on the settee; I darkened the finish with a black/brown color wash so that it would match the chair. (I had refinished half the piece before I remembered to take a photo.) As you will see in a later photograph, I also refinished the piano in a darker color; I simply could not like that light finish! 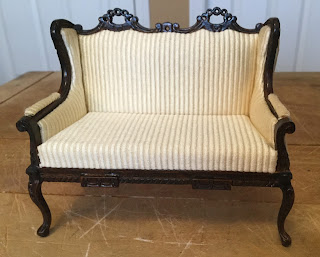 The final dark finish on the settee. 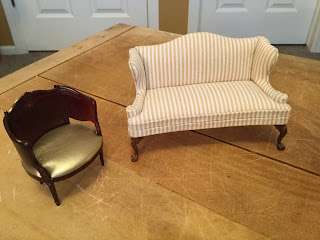 After all that refinishing, I changed my mind! I found these two pieces that seemed a better fit for the villa. (I'll find space for the discarded chair and settee in another room or another house.) Of course, I had to do a makeover. The barrel chair sat so low that it looked distinctly odd, and the metallic gold upholstery fabric had much too high an opinion of itself. However, the loveseat required no attention at all - a very rare occurrence! 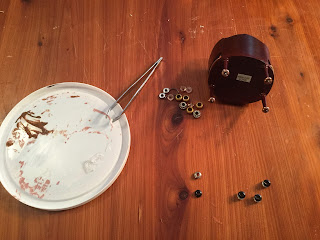 I needed to add height to the chair, so I started with the feet. I found an assortment of beads that I stacked and glued to the chair legs. 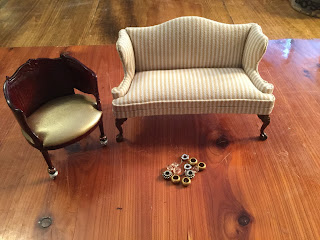 I added varying sizes of beads until the chair seat looked level with the loveseat. 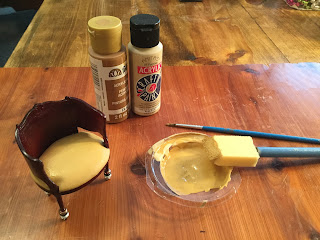 I painted the chair upholstery with Yellow Ochre, but that was much too yellow... 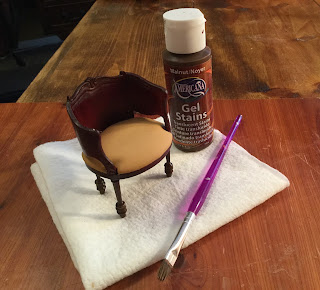 ...so I added some Cinnamon to darken it - much better. I painted the "bead work" on the legs with a Walnut Gel Stain, which covered the beads nicely. I was feeling quite satisfied with the chair's makeover - until Robert expressed his opinion that the chair looks as though it's wearing those thick "leg warmers" that were popular in the 1980s or 90s! 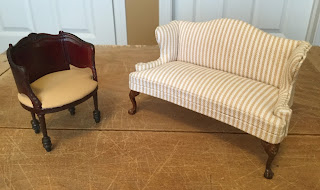 So maybe the chair still looks a bit odd - but it's a better odd than before! And it is the right height. 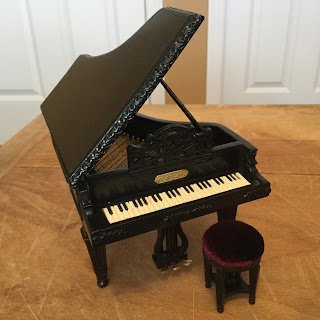 The light wood finish on the piano is gone, gone, gone; it's now a sort of brownish black. Mostly black. I painted the stool to match. The upholstered cushion on the stool was a very dark burgundy velvet, but it didn't look quite right - too much purple. 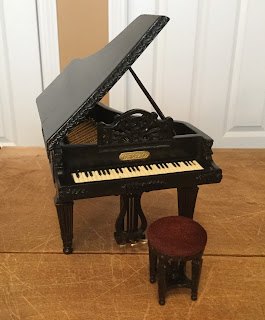 So I painted the cushion with a combination of Frosted Cranberry and Heritage Brick. There's only a subtle difference, but at least I got the purple out.

As I think I've mentioned before, I seem to always change each piece of furniture or accessory in some way; sometimes the change is a major one, sometimes small and subtle. Robert was visiting me in my basement workroom (which he sometimes does if I've been missing for an inordinately long time and he needs to communicate with me.) After watching my efforts as I sanded, distressed, and aged various pieces, he asked plaintively, "Can't they have anything nice?"

Well, nice maybe. But not new.

A COUNTER-CLOCKWISE TOUR OF THE VILLA LIVING ROOM 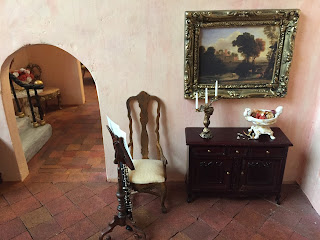 The tour begins just to the right of the villa's front window. The entrance hall is visible through the arched doorway. 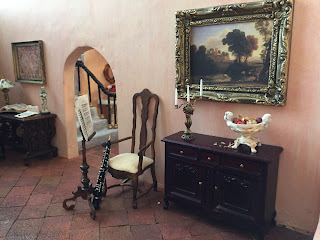 Someone has been practicing the oboe - did we interrupt? 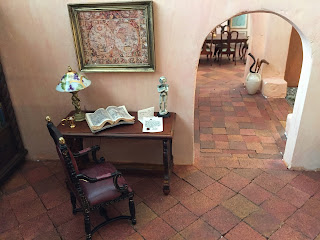 As we approach the desk, we have another view of the entrance hall and through to the dining room. 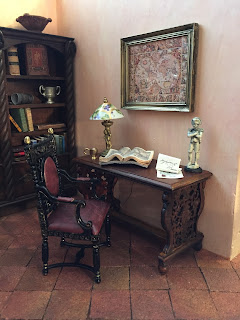 The desk is conveniently near the bookcase; important correspondence and research is sometimes required - even in a country retreat. 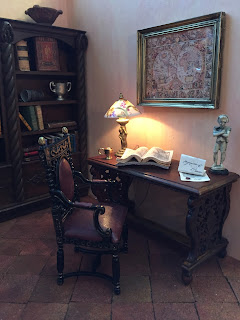 And even at night. 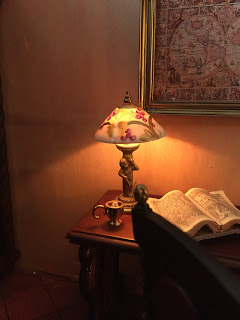 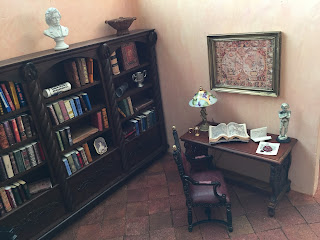 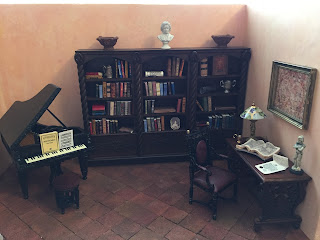 Beethoven is a silent observer of this musical family. 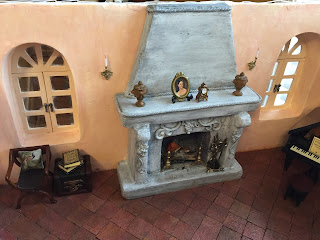 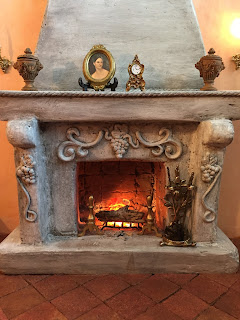 The fireplace and wall sconces create a cozy ambiance. 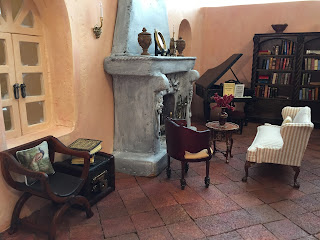 A longer view of the living room. (Note the odd chair with the warm legs.) 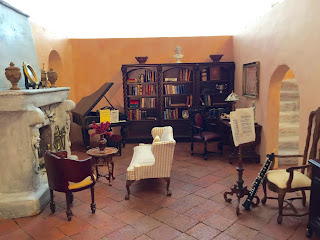 Another long view. The stone stairway in the entrance hall can be seen through the arched doorway. 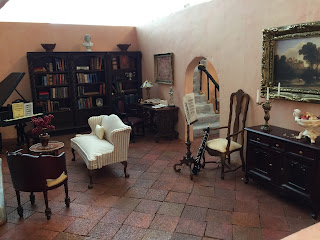 And we're right back where we started from!

You may have noticed that, as in the other lower-level rooms, I DID NOT STOP with finishing the back wall; I did the WHOLE THING! When I put the ceilings on, which is the NEXT THING, I'll very likely need to undo everything I've done. Except, of course, the BACK WALL. That will mean much more time and effort - but so be it. I've had a lot of fun; and re-doing everything after the ceilings are on will mean that I get to have a lot MORE fun! That's what it's all about! 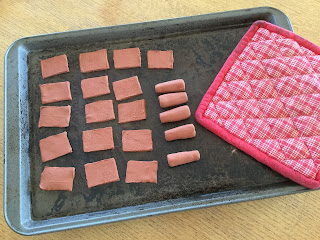 Moving forward into the New Year, this is a task that is always waiting for me - Roman roof tiles for the Villa del Vigneto. I make the tiles from Sculpey and work on them sporadically, but sporadically needs to happen more often in 2017 if I'm to have enough tiles by the time the villa is ready for its roof. 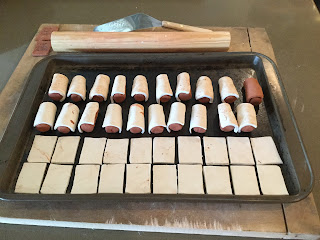 The Roman tiles consist of a "hip" pantile and a "flat" pantile. I cut the clay from a pattern that I made from Sculpey. The clay for the hip pantiles is wrapped around a finger-shaped mold (also made from Sculppey) before I bake the tiles. I use both white and terra cotta Sculpey, but I've found that the white clay is easier to work with; the terra cotta becomes too soft and pliable and doesn't hold its shape as well as the white. Strange. 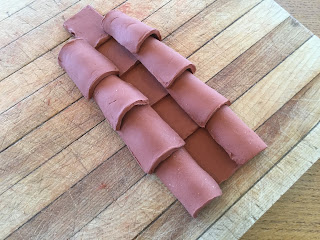 When I lay the tiles on the roof, they will look like this. The flat tiles, in Real Life, have a lip on both long sides; but since forming the lip would be very time consuming for something that won't be seen, I will form the lip only on the front row of tiles.

I currently have 169 hip pantiles and 151 flat pantiles. I estimate that I'll need between 1500 and 2000 total tiles to complete the roof.

"AND MILES TO GO BEFORE I SLEEP."
-Robert Frost

I wish each of you a HEALTHY and HAPPY 2017, filled with Peace and Love and Kindness.