The Soddy Grows Up

In my last post, we left my homesteaders ready to prepare their home site for the construction of their sod house. Their first step will be to stake out the corners of the house, but they must wait for a clear night so that one wall can be lined up with the North Star. In true pioneering spirit, the homesteaders want their home to stand "square against the world."

After the corners have been staked out, the homesteader, hopefully with the help of a neighbor, will begin cutting the sod blocks. The house will have an inside measurement of 14' x 18' and will require approximately one and a half acres of sod. Each sod block weighs about 50 pounds, and is limber rather than rigid, so carrying and laying the blocks is ideally a two-man job.

It will take my homesteader two to three weeks to build his soddy, depending on the weather and on how much help he can muster. Meanwhile, he and his wife will live in their covered wagon, thankful that the weather is warm. Not all settlers arrive in a wagon. Some come by train; others are on foot. Without the convenience of a wagon to provide temporary shelter while their soddies are constructed, these settlers resort to carving a "dugout" from a hill or embankment. This cave-like shelter has only dirt for the floor, the roof, and three walls. A piece of canvas can be hung to cover the front opening. If canvas isn't available, a rough, movable wall might be created using brush and small branches gathered from the banks of the nearest creek.

I'm sorry to say that my sod house will not be completed in such a short time as two or three weeks - or probably not even in two or three months! But I've accomplished some things, in spite of myself, and the following photos show my progress. Of course, the photos also show my usual setbacks as I get started - and restarted. 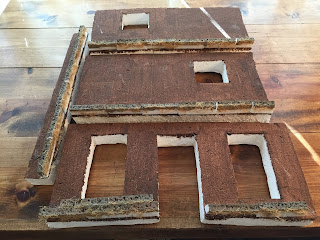 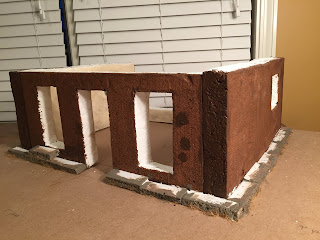 I removed the uneven first course of sod blocks and secured the walls in their upright position, using my usual toothpicks-and-glue technique. Then I started over, laying the blocks flat on the base board.
Success! Now I can proceed with laying the sod blocks. 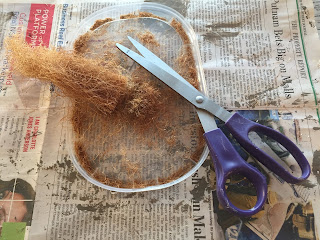 I cut a shank of prairie grass (oven-roasted corn silk) into bits of about 1/4" in length. 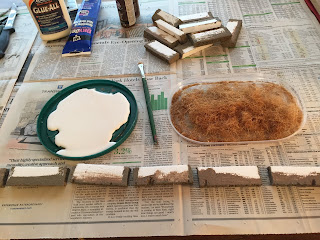 Next I use a brush to apply glue to the bottom front edge of a sod block. I tried just dipping the edge into the glue, but that became very sticky and messy very fast. The brush prevents (mostly) such sticky, icky fingers. I also apply glue to the back edge of the block, which will be placed against the styrofoam wall. 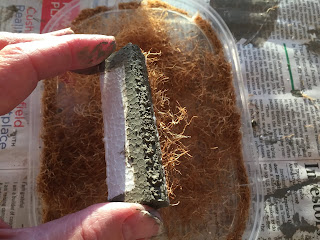 Then I press the glued front edge of the block into the grass. 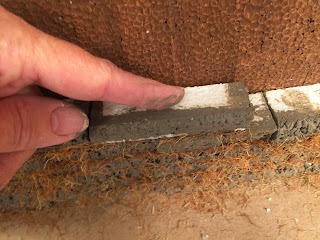 Finally, the block is laid in place and pressed against the styrofoam wall. I also insert toothpicks at intervals to secure the sod blocks. The excess grass that you see in this photo will be gently brushed away. Every fourth course or so, the sod blocks are laid crosswise instead of lengthwise along the wall, in order to bind the inner and outer blocks firmly together and add stability to the structure.
(You may remember that my solid styrofoam "inner" walls would, in Real Life, be an inner wall of sod blocks just like the outer wall.) 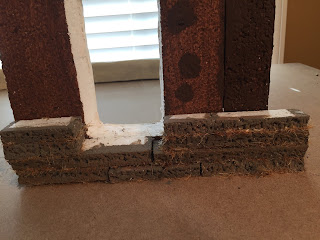 The sod blocks are laid with the grass side down, allowing the roots to grow upward into the blocks above, strengthening the wall. 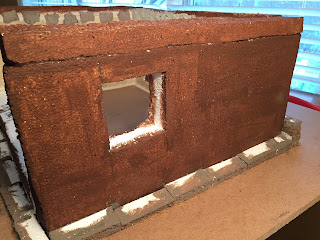 Hmmm...these walls seem to have grown a little taller since the first two photos in this post. You will not be a bit surprised to learn that I had to increase the height of the walls because of an OVERSIGHT! Yes, I made a mistake! Or, actually, I thought I had made a mistake, but as it turned out, I was mistaken in thinking that.

As I was laying blocks on one of the end walls, I took a long look at the window opening, and I remembered that there is supposed to be a half-inch space between the top of the window frame and the support beam over the window. This space would have been filled with paper or cloth to provide a "buffer zone" so that as the sod blocks settled, the weight of the wall wouldn't break the window panes. The same is true of the door frame, to avoid jamming of the door. I realized that if I belatedly cut that half-inch of space, the support beam would be too close to the roof, allowing no space for the roof beams.

I set about correcting the error by adding an inch and a half to the height of the walls. That makes the walls higher than I would like, but not unrealistically high. Of course, the addition meant some more interior work, as you'll see below - and the end of this story will follow. 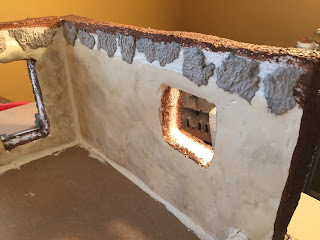 I had to add more wine packaging "bumps" to the addition... 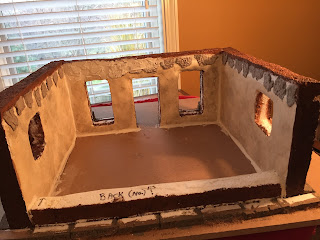 ...then cover the bumps with joint compound. Then sand a bit and eventually repaint the entire room. 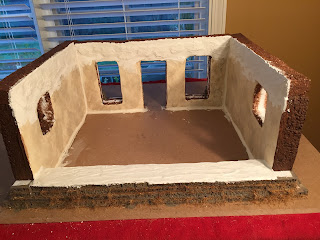 At this point, before I painted the room again, I got out my windows - four of them - and tried them again for fit. And - guess what?! All four were consistently exactly one-half inch too short for the window opening! Yes. When I had cut the window and door openings, I had, with due diligence and great intelligence, allowed the necessary extra half-inch that was needed for the paper or cloth buffer. Except that I had let too much time pass before moving ahead with the construction and forgot what I had already done. My memory is way too short for such a long time lapse. So there you have it - my full confession. I may yet reconsider and saw off most of that addition, making another mess and a lot more work. But that'll be another story! 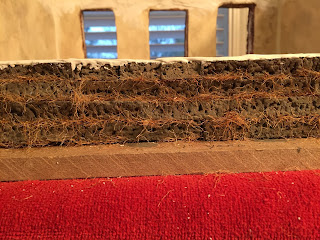 This is a close-up photo of the low back wall. There is an implied solid sod wall here, but I've left it open for viewing purposes. 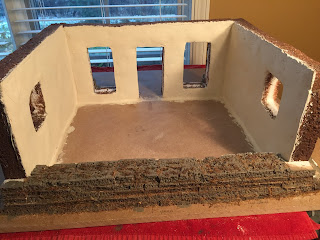 I initially thought that I would stucco the top of the wall the same as the interior, then I changed my mind and treated the wall as it would have looked during the sod laying. The adjoining wall edges will later be treated the same. I just need to decide how those sod blocks would be laid, and that will be easier to determine after the corners are finished. 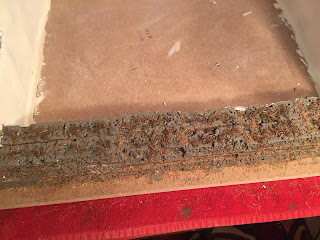 In this close-up of the top of the wall, you can see the grass roots entangled in the sod. The roots were so tough and thick that as the sod was cut into strips by the cutting plow, the ripping grass roots made the sound of a giant zipper being opened. 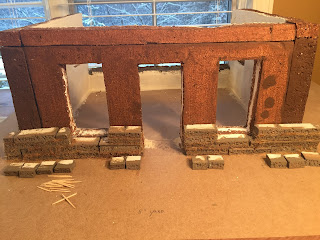 Building up the sod courses. Each course should be laid all around the structure before the next course is started, in order to keep the walls as level as possible. A course of "crosswise" sod blocks is ready to lay. 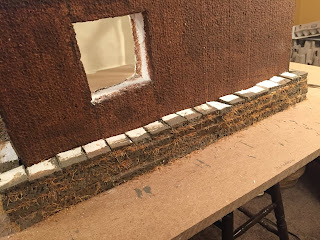 A course of crosswise blocks has been completed along one end of the house. 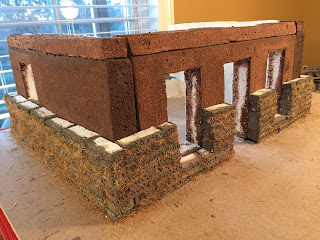 The sod walls grow higher along the front and west end.... 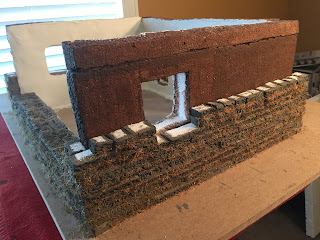 ...and another "binding" crosswise course has been completed on the west end.


That's the extent of my progress to date. The walls will continue to grow upward as planned, but otherwise, construction will be by trial and error as I move on to the next steps. In spite of the various setbacks - with more certain to follow - I'm enjoying this project immensely, even while wading into unknown territory. But as I navigate through the unknown in the safety of my workroom, I imagine with what trepidation and uncertainty those pioneers faced the building of their own homes and the settling of a new land. What courage!