I didn't get as much done in November as I had thought I would, but I did finish one thing, and it was a good stopping point. I hope I'll have time in December to finish another thing. Do I sound as though I'm trying to drag this thing out as long as possible? That's because there isn't much more to do before I'll have to start the roof work. So - yes - I'm dragging and dragging and dragging! 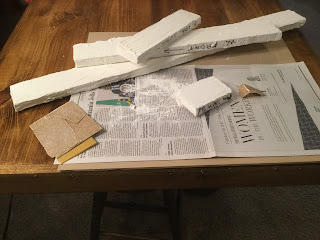 When I was ready to start building the low wall in front of Villa del Vigneto, I searched through my huge stash of styrofoam to find pieces of the right size. And Lo and Behold! I found the original wall pieces that I had measured, cut, and stuccoed exactly two years ago. I was working in the garage at that time, racing to get all the villa pieces prepared before the weather grew too cold. I knew that I wouldn't need the wall pieces for many months, so I set them aside to save time. And I forgot all about them. It was a great surprise to come across the pieces; they were finished except for requiring a light sanding. 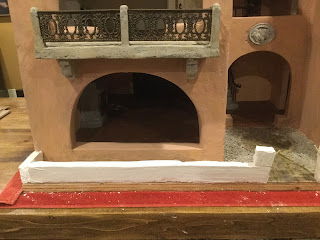 When I set up the wall for a dry fit, I realized right away that the wall would be too high. There's only a very narrow space between the house and the wall - due to that ONE very unfortunate mistake that I made in my early measurements. That mistake meant that I had to subtract an inch from the already too narrow space. So the wall that wouldn't have appeared too high in a wider space seemed way too high now. That ONE mistake has come back to haunt me repeatedly! I cut off a strip from the bottom of the wall to lower it a bit. I also added a piece of styrofoam for a gate post. (Although I'm wondering if a gate post is still called a gate post if there's no actual gate. I'm going to refer to them as gate posts for the time being.) 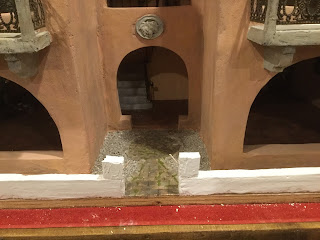 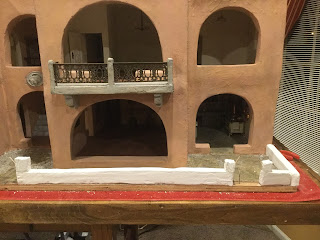 I hadn't originally planned to have the loggia gate, but I cut it in as an afterthought and added more gate posts. 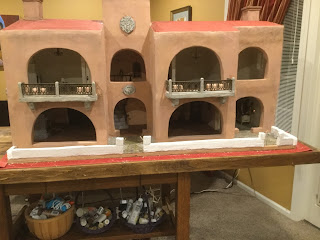 An overall view with all the wall pieces and the gate posts in place. 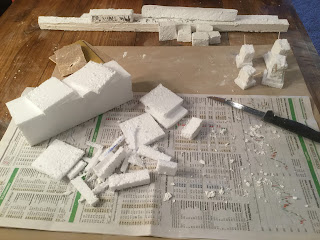 I made quite a mess cutting styrofoam for the gate post caps - it was hard to get a size that looked right. 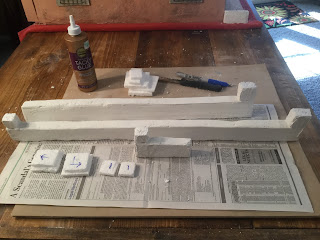 Finally, I have all the wall, gate post, and cap pieces that I need. 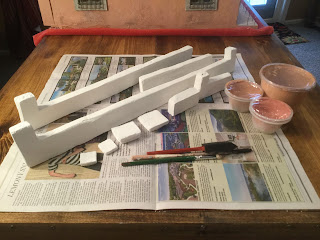 All the wall pieces have been re-stuccoed and sanded and are ready to paint. 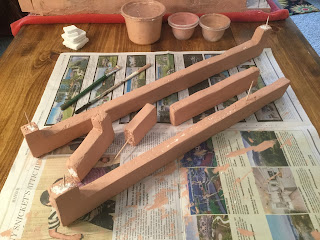 The base coat of paint has been applied. The wall is the same color as the villa walls. 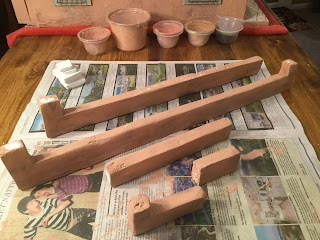 I've done some aging on the wall pieces. 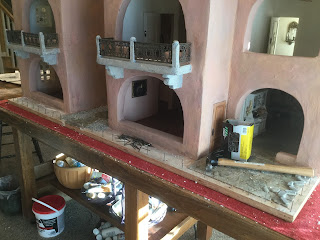 I hammered in the support nails for the wall. I had the nails in place previously, but I kept scratching my hands on them, so I pulled most of them out and covered the remaining ones with protective styrofoam bits. 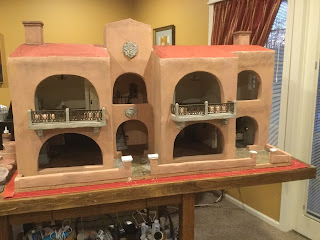 The wall has been mounted on the glue-covered nails. 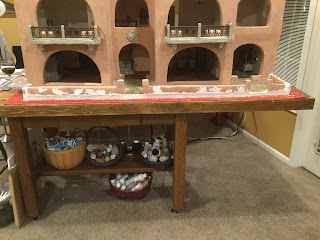 The wall seemed too smooth, so I added some swipes of joint compound for more texture. 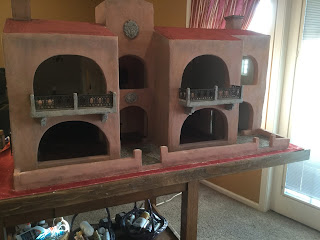 I aged the wall a little more.

I cut thin pieces of styrofoam for the capstones on the wall, then applied a thin layer of joint compound. These pieces are ready for a light sanding.

I painted on a base coat of Deep Taupe... 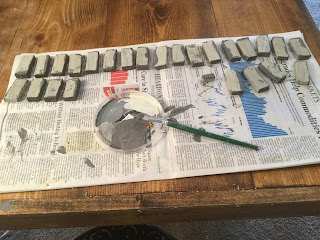 I cut 2" lengths of the strips to make individual stones. You may notice that the stones are narrower than the original strips. I had planned for the capstones to have a slight overhang, but I decided that didn't look right and used too much space. I cut down the styrofoam pieces to make the stones the same width as the wall. Of course, then I had to re-touch the paint. 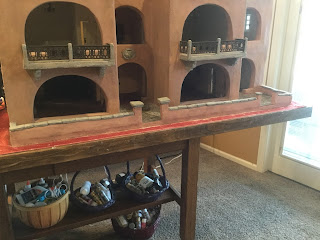 All the stones and capstones have been glued in place. 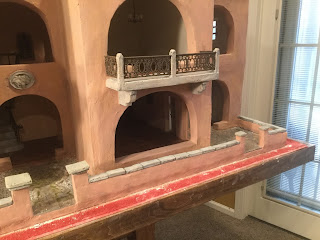 A closer view of the stones. 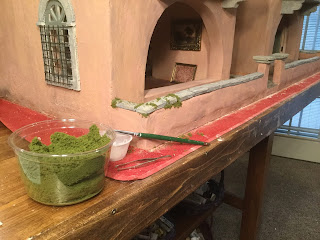 The wall looked so plain that I impulsively decided to embellish the capstones with moss. (Model railroad landscaping material - "Coarse Turf.") I spread glue along some of the crevices and stones, then pressed on the "moss" with my fingers. 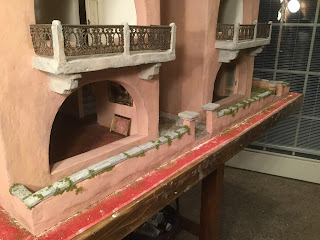 I applied moss to the entire wall... 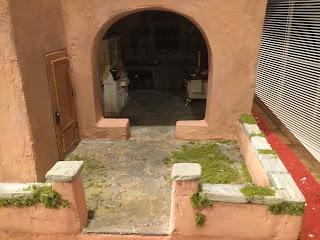 ...and to the loggia floor. 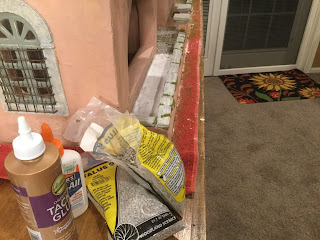 While I waited for the glue to dry for the moss, I spread a liberal layer of glue on the narrow path between the wall and the house in preparation for an application of gravel. 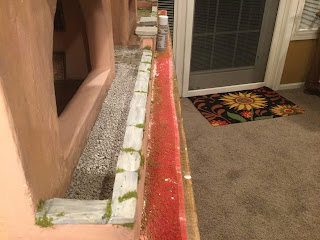 Then I sprinkled a generous layer of gravel over the glue on the path and pressed the gravel down firmly. This is a view from the west end of the villa. 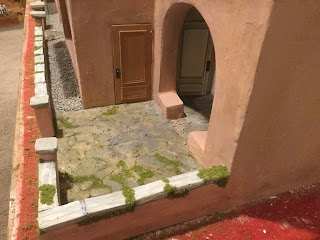 This view looks from the loggia toward the west end.
When the glue for the moss had dried, I carefully swept all the excess moss from the wall and the loggia, leaving only the moss that had adhered to the glue. 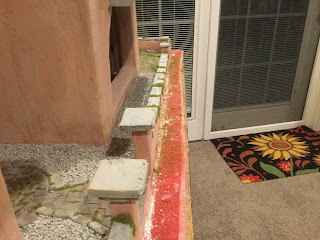 And only then, when the moss was quite permanently glued on, did I recognize a major oversight. (Not a mistake, mind you; just an oversight!) My impulsiveness was entirely to blame. Before I built the wall, I knew three things about moss: a rolling stone gathers none; it (supposedly) grows on the north side of trees; it grows in shaded, moist areas. Well, the stones on the villa's wall aren't rolling, but the front of the villa faces south - full sun and little moisture. I did some belated research, and now I know a few more things about moss. One encouraging thing that I know is that at least one variety of moss can tolerate almost full sun if it is kept moist enough. Perhaps I can persuade one of the villa's inhabitants to go out and mist the moss on a daily basis. Otherwise, there isn't much that can be done, short of turning the house around to face north, or tearing out all the moss. But I like the moss! So I may do nothing. If all my (belated) research is correct, the moss is likely to die out soon anyway. Bummer! 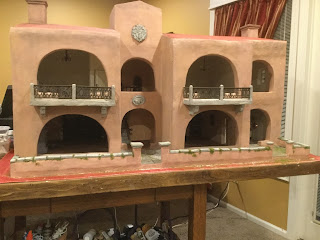 Villa del Vigneto with its completed (and temporary?) mossy wall.

Although my experience with the mossy wall left me less than satisfied, I'm going to just let it be for a while and see whether a satisfactory solution presents itself. Meanwhile, some interesting jobs remain to be done, and I'm excited to get on with them, even though "miniature" time will be tight this month. Thank you for visiting Villa del Vigneto!

WISHING YOU A JOYFUL DECEMBER AND A MERRY CHRISTMAS!