There Is No Such Thing As a Simple Window

Thank goodness that those Tuscan farmhouses had very few windows - and small ones at that. When this farmhouse was being renovated and was metamorphosing into a small villa, the new owners realized that it would be inordinately expensive to enlarge or change the windows in any way because of the necessity of cutting through the thick stone walls. Nevertheless, it did seem as though the main living space of the villa should have slightly more stately windows than the ones original to the farmhouse. So it was decided to change just the tops of the two windows by cutting into the stone and adding a small arch.

That's my background story, and I'm sticking to it! 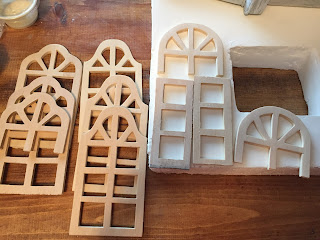 My first step was to decide what style of window to use. I had a variety of windows on hand from which to choose. I decided to use the simplest style, since this is a simple villa. 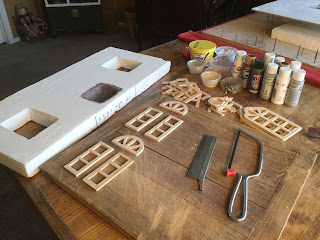 I cut down the ready-made window frames to fit the windows. I had to cut apart a double-paneled window to make each single panel, which seemed wasteful but necessary. 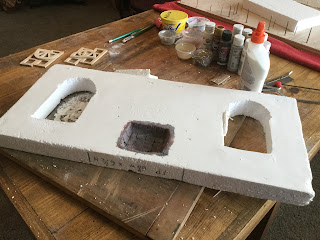 Next came the hard part of cutting through the stone-like drywall compound to make the arches. How much easier it would have been if I'd made this decision before the wall was stuccoed! I had to do some patching with bits of styrofoam to get a better fit. 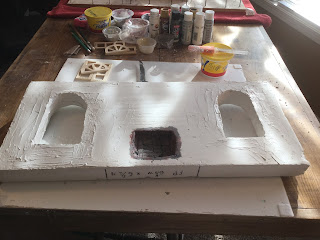 The arched windows have been re-stuccoed with the drywall compound. 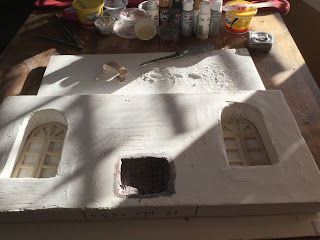 I finished a light sanding on the windows. I didn't spend much time on the sanding, because it would surely have to be repeated time and again before these windows were a good fit. 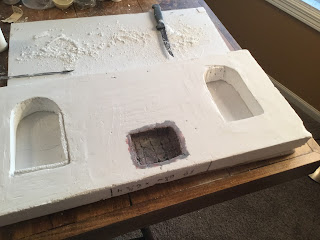 I was right - additional patching with styrofoam strips was necessary. That 1 1/2 inch thickness can sometimes be difficult to work with. 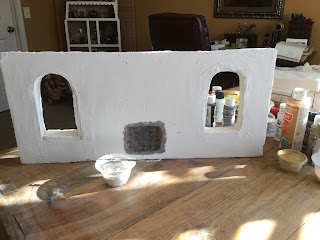 A little more stucco has to be applied to the patched areas. 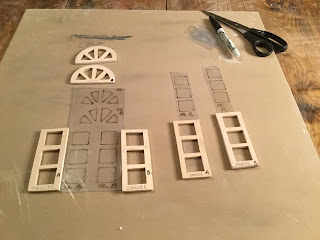 While the stucco dries, I have time to cut window panes to fit in the frames. The last time that I made windows, I used plexiglass for the panes but was not happy with the results. This time, I purchased some lighter-weight material, although I wasn't sure that it would be heavy enough. Then one of those serendipitous moments happened: I was opening up a plastic-encased item when I suddenly realized that the plastic was perfect for the window panes! So I used that instead of the purchased plastic. 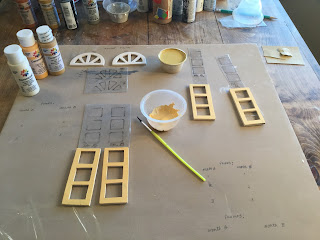 I'd better not get ahead of myself; the window frames should be painted before I install the panes. But I haven't quite decided yet what color I want the frames! Maybe this color? 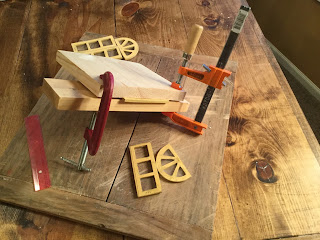 Now that the window openings are almost the right size, I can admit that the arched top of the window is not wide enough to fit the span of the panels. The panels must be sanded down to fit the bottom width of the arch. And sanded and sanded and sanded. It might have been easier to cut off a portion of the edge, but my saws aren't very sharp. I was doubtful that I could cut off such a thin strip.

I seem to always use makeshift tools. I could get new ones, except that I never know the sort of tool that I'll need until the time is at hand. So I make do with makeshift. 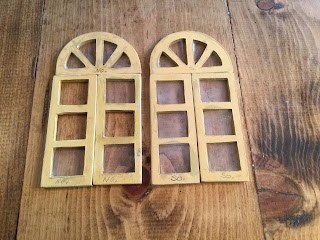 Now the arches are in alignment with the window panels. This is a photo of the exterior side of the windows. I have installed some of the plastic window panes to see how they fit. 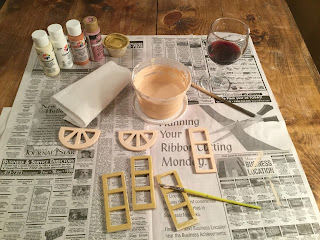 I changed my mind about the color of the interior windows. This peach-apricot color will be the base coat for the interior walls of the villa. The window frames had to be painted before I permanently installed the panes. I also needed to make and install the pulls for the four window panels after painting but before installing the frames in the window openings. 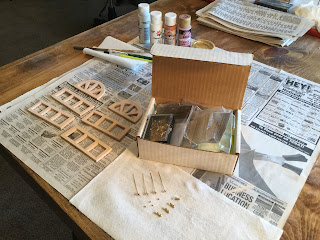 I got out my box of assorted tiny bits and pieces to see if I had the makings of window pulls. 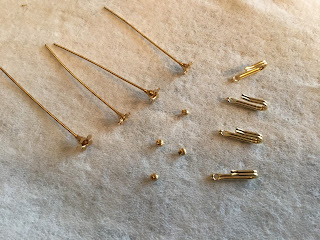 I found four hooks and four brass beads and four flower things with long stems that I thought should all work together to make the pulls. 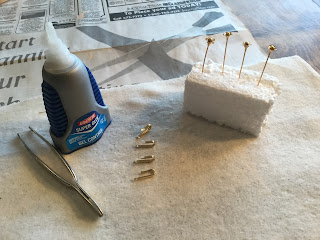 I glued the beads inside the top of the flowers. 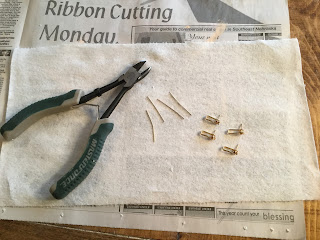 Then I snipped most of the long stem off the flowers, leaving just enough to push into the wood of the window frame. The short-stemmed flowers were inserted and glued into the top loops of the hooks. 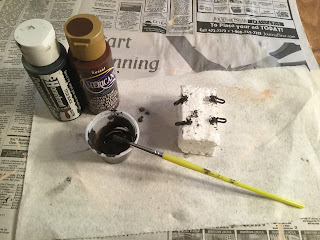 I painted the pulls with a black/brown paint color combination. 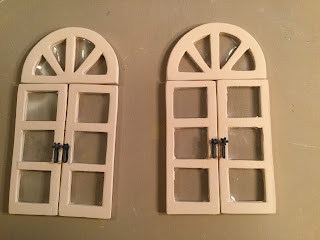 I pushed the glue-covered short stems of the flowers into the wood frame, installed the plastic window panes, and was ready to put the window frames into the window openings. 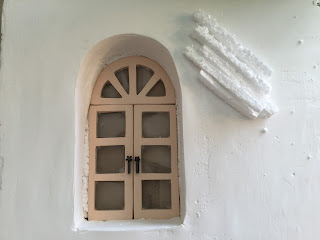 And I was not a bit surprised to find that the windows were still not a good fit. So I added another bit of styrofoam to the interior sides of the windows. 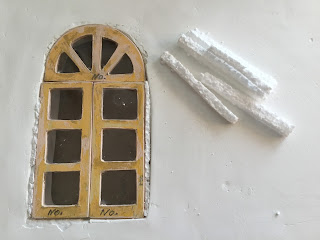 And more styrofoam strips to the exterior sides. 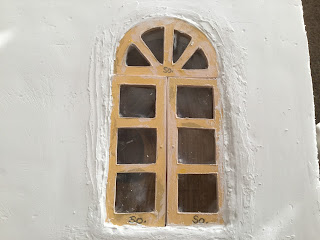 Another stucco repair job to both interior and exterior windows. 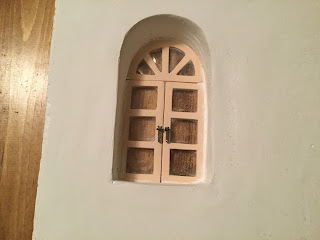 Followed by more sanding on the interior... 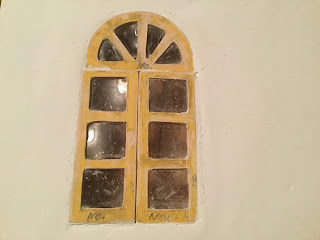 ...and on the exterior. That was followed by a much-needed window washing. 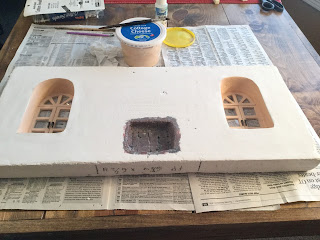 I painted the interior arched window openings with the peach-apricot base coat. 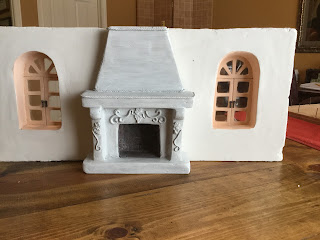 And the villa living room has its slightly stately new windows!

And so this blogpost comes to an end, as does January. The end of January is always a big thrill for me! So tonight I celebrate its close. I would say that means that the worst of winter is over; but although our last snow is almost entirely gone, in a day or two, we've been warned, a blizzard will blow in another foot of the stuff. The arrival of February in no way means the arrival of spring, but it does bring us one step closer. Thank you for stopping by. Have a Happy February! 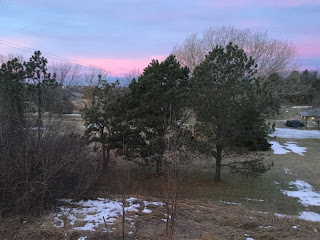