From Cork to Terra Cotta

My Tuscan Villa finally has some standing walls, so the next important step was to create the flooring. My first idea was to use travertine marble tiles, but I quickly decided that was a bit too formal for this farmhouse-turned-villa. Then I thought about gray sandstone, from which both the fireplace and the stairs are made. But that seemed like a lot of gray in a villa that I thought should have a sunny disposition. So my final decision was to lay terra-cotta tiles - reclaimed ones, taken from some of the outbuildings on the original farm. They were made in the old style, with a slightly beveled edge, so that they can be laid close together without the necessity of grouting. The tiles originated in different regions of Tuscany, and vary greatly in age; hence a colorful floor that creates its own sort of sunshine in my little villa. 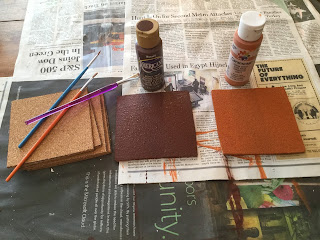 After much deliberation and experimentation, I found coasters made from cork. I liked the light weight, the texture, and the convenient size. I wasn't sure how paint and paint washes would affect the cork, so I painted two of them and waited to see what would happen. 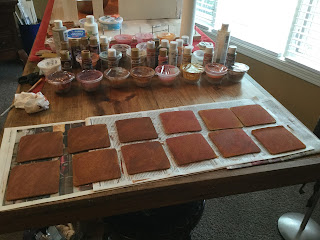 Nothing happened. None of the adverse changes that I had foreseen - like curling or crumbling - actually took place, so I felt confident in moving on with the tile making. I painted the cork coasters with a variety of colors, including brown, pink, yellow ochre, coral, and a rosy brick color. 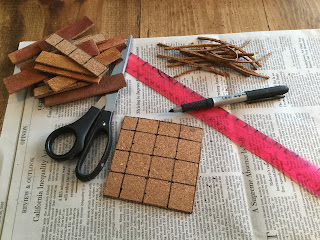 Because the cork coasters measure 4" x 4", I had hoped to be able to cut 16 one-inch tiles from each coaster. I had overlooked the slightly rounded corners, which had to be trimmed away, so I could actually cut only 9 one-inch tiles from each coaster. That resulted in many leftover pieces to be trimmed away, but I felt sure they could be put to good use somewhere. 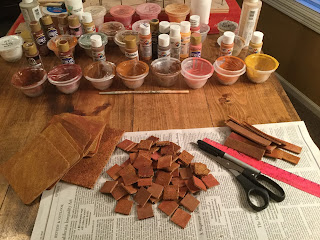 The pile of one-inch tiles grows. I estimated that I needed around 650 tiles for the living room and the dining room. I found that painting, measuring, and cutting twelve coasters at a sitting didn't overtax my work space or my patience. But I was surprised at how fast those batches of 108 tiles were used up! I had to repeat the process several times. 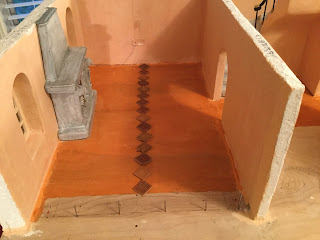 I painted the floors to be tiled a terra-cotta color to blend with the tile color where there are gaps in the tiles. Then I began laying the tiles on a diagonal, starting at the center point of the living room floor. I secured the tiles by brushing Elmer's glue on each one as I laid it in place. 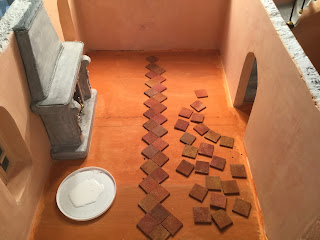 The job moves along, row by row... 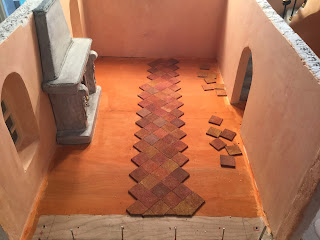 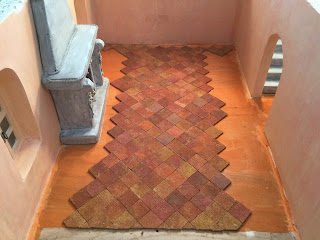 Some trimming was necessary on some of the tiles to get a good fit, but they went together very easily, for the most part. 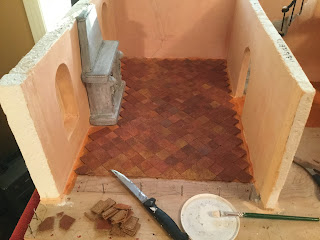 Almost finished! The edge pieces, of course, needed to be fitted and trimmed individually, which took much more time. 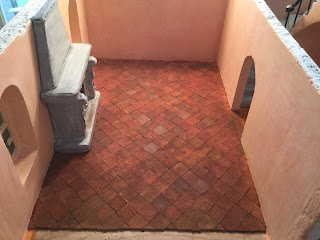 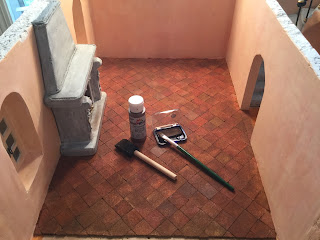 Except for applying a little Spice Brown paint and a bit of Taupe eyeshadow to recreate the aging process... 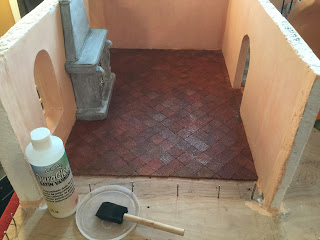 ... and brushing on a light layer of satin varnish to simulate (hopefully) the linseed oil-beeswax mixture that would traditionally have been applied to the floor. Now the living room floor is officially finished - so... 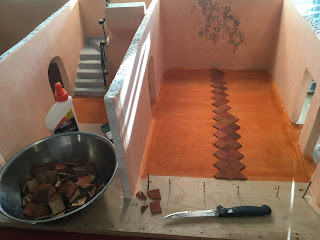 ...it's on to the dining room to repeat the whole thing! I used the same technique here, laying the tiles on a diagonal from a center starting point. 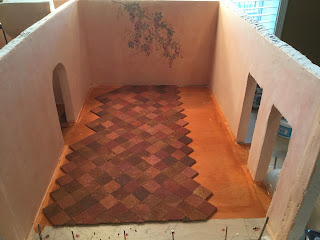 I added row after row, sometimes working on one side of center, sometimes the other side, just to avoid monotony. This was actually a very restful project; I was very much "in the moment" during all the tile laying. 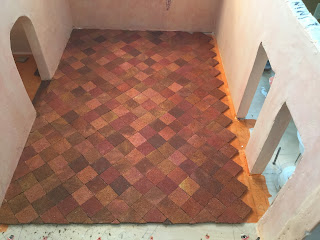 Edging closer to the finish line! 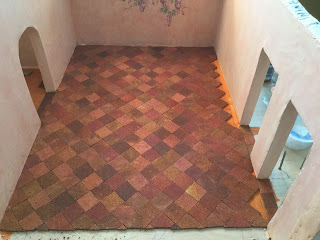 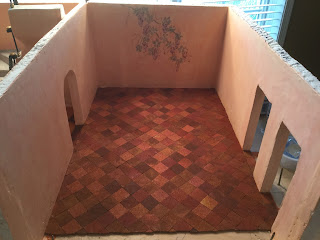 And done! I used the same aging process and finish as on the living room floor. 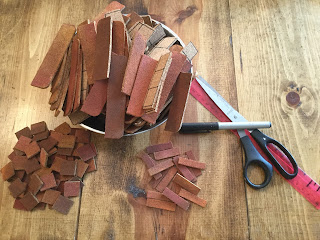 I knew I'd find a way to use those scraps that I cut from the original coasters. But I didn't think the chance would come so soon! I decided to try a different tile pattern for the entrance area, since the scale of that room is much smaller than the other rooms - and there were all those pre-painted pieces just waiting for me. I needed only to cut the scraps to the size I wanted. 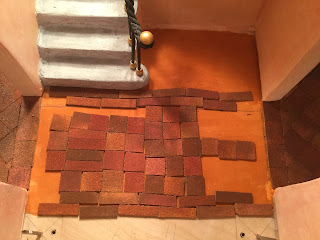 I worked out a trial pattern, although I changed it a little as I went along. (The tiles are not supposed to look so drunken - it was hard to keep the loose tiles in a straight line!) I used 3/4" tile squares for this area, and 1 1/2" x 3/8 " tile strips. 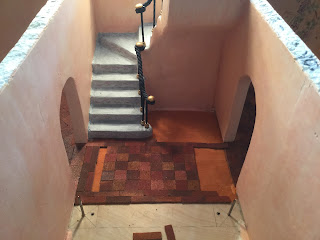 I divided the entrance floor into two sections - the front section from door to door, and the back section under the stairs. The two sections are separated by a double row of tile strips, which also edge the boundaries of the entire floor. 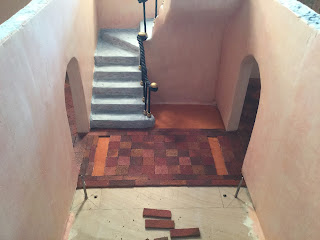 The front section is nearing completion. 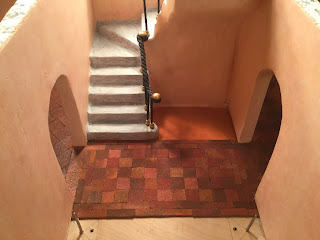 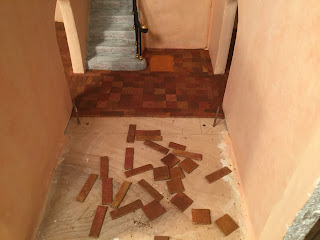 And I'm making progress on the back section. 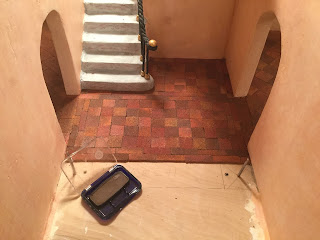 Add on a few years of wear and tear and a bit of "linseed oil-beeswax." 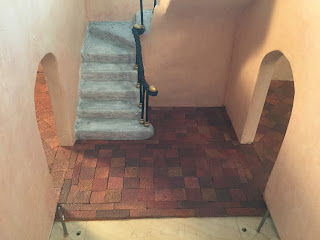 At last! The villa has floors! This was the most relaxing, stress-free part of the villa construction so far. Although I spent many (and many more) hours on the flooring, those hours passed with no trials, tribulations, trauma or drama! I simply decided what I wanted to do, then I did it, and then it was done! 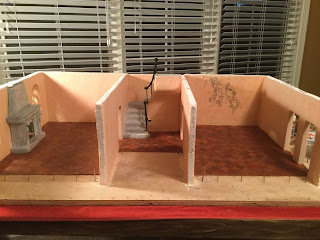 The living room on the left, and the dining room on the right, were part of the original barn. The center area, now the villa entrance, gave access to the stone stairs, minus the protective railing, which led to the second-level living space for the farm family. The original barn floors were a combination of dirt, stone, and tile, depending on the designated purpose at any given time. 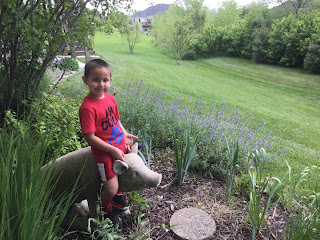 Most of the month of May brought rain, thunderstorms, tornadoes, hail (and hail damage) to Nebraska. We've had a few rare sunny days, and my six year old great-grandson, Junior, decided to take advantage of some dry weather to ride a pig. (Wilbur is a hard-headed pig, so he suffered no damage during the storms.) I have high hopes for a warmer and drier June with abundant sunshine, and I wish the same for you. Happy June!