Lit Up and Battened Down

At last, I feel that I'm moving forward with the actual construction process of the Villa del Vigneto. I know that the tasks I've accomplished recently were important and needed to be done, but all involved many "finishing up" details that I usually take care of AFTER construction is complete. Possibly that's the reason that I've felt sort of "stalled out." But I'm ready to get moving again. Hanging some ceiling lights and chandeliers were the last things to be done before I was ready - FINALLY - to install the ceilings for the lower level. My progress has been slow, but more or less steady, so at least I have some results to show for the month of January. 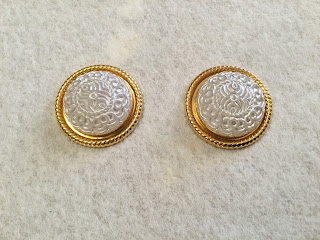 I chose these two ceiling-mounted light fixtures for the villa kitchen. But, as usual, I needed to change them a little; the trim was so brassy! 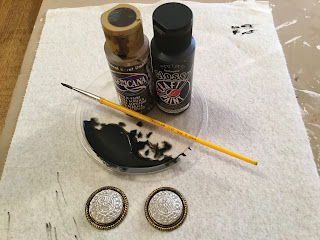 So I dulled down the shining brass with some brownish-black paint. I rubbed the blackish finish so that some glowing brass still peeked through. 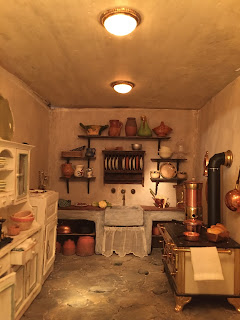 After the lights were installed and the photo taken, I realized that the trim still looks shiny. But it isn't! All the ceiling pieces for the lower level are only loosely installed at this point; after securing all the ceilings, I will need to touch up all the edges where the ceiling meets the walls. 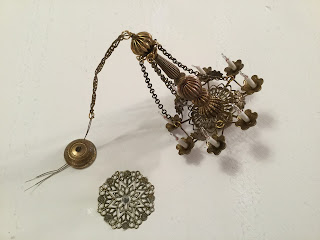 I chose two identical chandeliers from J. Getzan for the dining room and the living room. Then I happened to come across two filagreed medallions that I thought would work well to highlight the chandeliers. 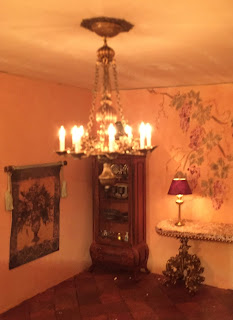 The dining room chandelier is up and working (!) There are always some tense moments after all the wires are connected but before the power is switched on! 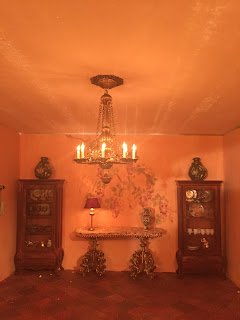 The chandelier will hang directly over the dining table. 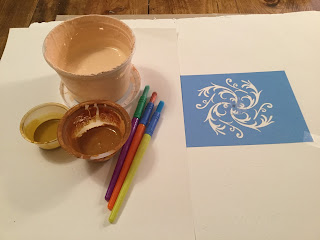 I decided to add more detail on the ceiling before the living room chandelier was installed. 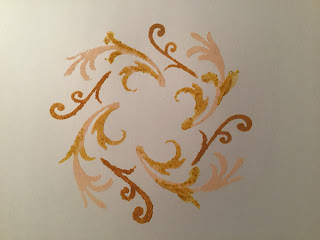 I used three different colors for the stencil. 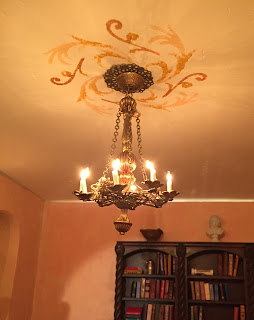 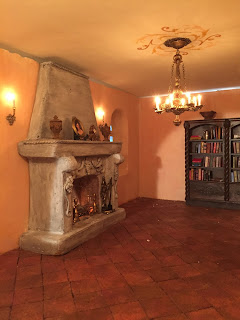 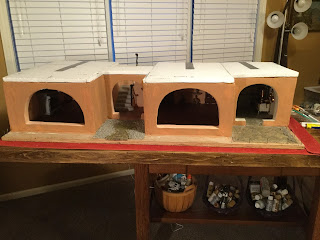 All the ceiling pieces are on, the lights are installed, and the electrical wires are all protected by duct tape. It's dark inside this villa! Thank goodness for electricity. 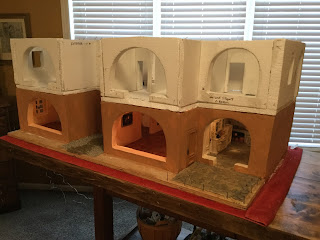 It's time for a "trial run" to make sure that the upper-level walls fit before I start securing them with toothpicks and glue, my usual method. I've turned on the lights - much better. 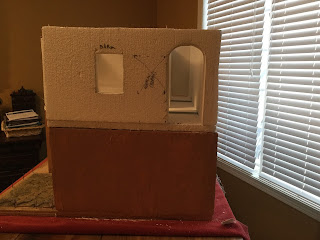 We'll take a quick tour around the outside of the villa. (You know I love tours!)
This is the east end, over the kitchen. There is a small front bedroom that has a single east window, and a long hallway runs along the back as far as the center bedroom. There will be a small balcony outside the hallway's tall door (or window?) opening. 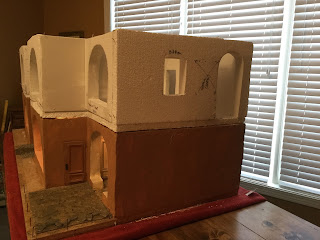 Now we turn the corner to the front of the villa, where you can see the loggia outside the kitchen and the small east bedroom's front opening. 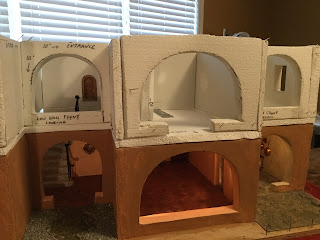 This is the center bedroom, over the dining room. It has a door (not seen here) that opens to a short hallway. The short hallway leads back to the long hallway or through an archway to the stair landing.
This bedroom opens onto a long front balcony. 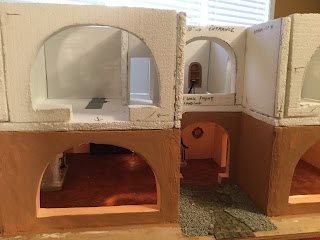 We just passed the stair landing and are in front of the west bedroom. This bedroom also opens onto a long front balcony. There is another short hallway that gives access through an archway to the landing or through a doorway to the bathroom at the back corner of the villa. 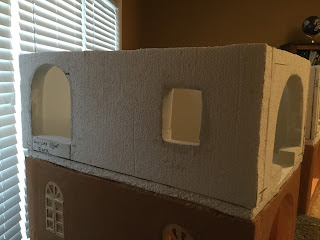 And we've come all the way to the west end, where you see the bedroom's single window and a large opening into the bathroom at the back. 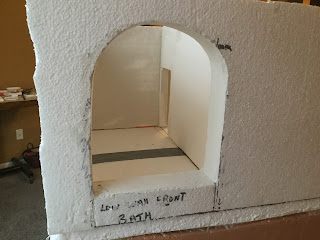 You can get a glimpse inside the bathroom and see the door that leads to the short hallway. Pay no attention to the weirdly uneven back corner. Styrofoam allows me to make corrections and repairs as I go. (Styrofoam is so forgiving!) Now that I know the walls seem to fit where they belong, it's time to tear them all down. I'll put them up again one by one over a LONG period of time! 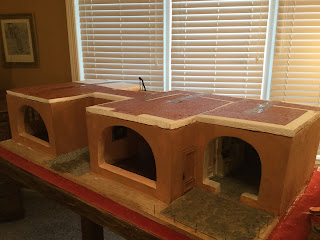 I've battened down the hatches! I've also applied a coat of paint to cover any white that may show between the floor tiles when I lay them. I left the bathroom corner white; I may decide to use a light-colored tile there, although that remains to be seen.

The villa is now ready for the second level! YIKES! 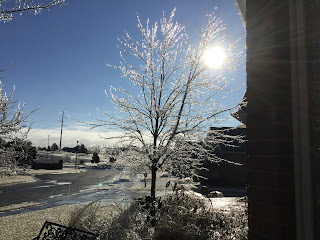 Even in the midst of bleak and dark times, there can be moments of sparkling brightness. Following a treacherous ice storm here, the sun highlights nature's apology.


It is my hope that February will bring a sparkling brightness to all our hearts.