To Top It All Off

August slammed me with an inauspicious start. Just when I was ready to begin work on the exterior of Villa del Vigneto, I lost my workroom. Or, more accurately, my workroom lost me and the villa. It was my own fault. Just over a year ago, in July of 2016, I was putting up the living room walls on the villa's lower level when I discovered that I had made a mistake in my design measurements. After much stressful maneuvering, I managed to "fix" the problem, and I thought that all was well.

But a year later, on one of the first few days of August, I was planning the back exterior wall of the villa - the wall that will cover all the electrical wiring. The "false" wall needs to extend out about an inch and a half beyond the "real" wall, in order to clear all the wires. (There are a LOT of wires!) And a sudden, dreadful realization burst upon me. (That sounds very melodramatic, but it was a very melodramatic moment.) That extra inch and a half was NOT planned for when the villa's plywood base was carried in through the door of my new workroom. I had full confidence in the fact that the base, with completed villa on it, could be carried out again with the same ease.

After measuring again and again, (no mistake this time) I knew that there was no way the wider villa was ever going out again through that door. Robert, for some reason, refused to contemplate cutting the doorway wider or removing the windows. My only recourse was to move the villa out of the room before I added on that extra one and a half inches. So that's what I did. I admit to feeling somewhat ill-used, all because of one - ONE! - mistake made all those months ago.

I keep thinking how appropriate is my favorite old proverb: "The mills of God grind slowly, yet they grind exceeding small." 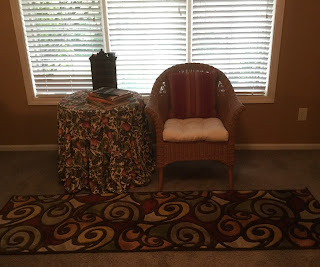 This sad photo shows the space that my work table used to occupy in my small workroom. 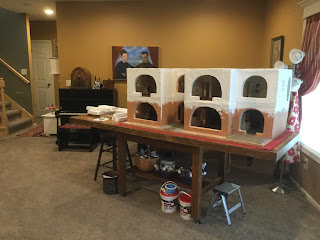 And this even sadder photo shows the work table in its new location in the family room, where it stands smack in the way of everything. I also feel guilty if I don't clean the area after every work session! 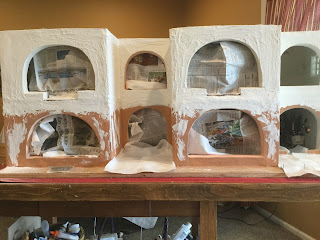 The sad tale doesn't end yet. I have stuccoed (with joint compound) all the upper level exterior walls - and now they have to be sanded and sanded and sanded. Where do you think all that white sanding dust goes? I've blocked the wide openings of the villa with newspaper and paper towels in order to keep out the worst of the dust. I should have newspapered the entire family room. 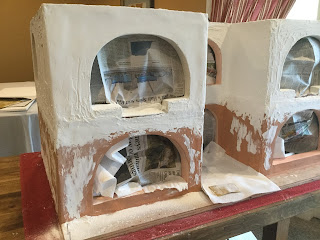 But there was a reprieve of sorts. I had made a good start on the sanding when I realized that I really should put the roof on before sanding further, because the roof installation involves more joint compound that requires still more sanding. 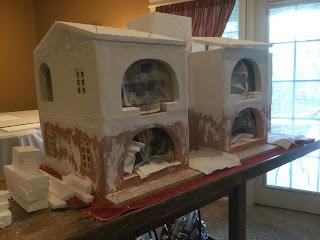 Trying the roof sections on for size. I also constructed a "tower," which was actually a dovecote in the original farm house. The farmer's access to the dovecote was through an opening in the ceiling of the stair landing, reached by a ladder. That opening, as well as the pigeons' entrance, was walled up during the first renovation, but the tower structure was left in place. 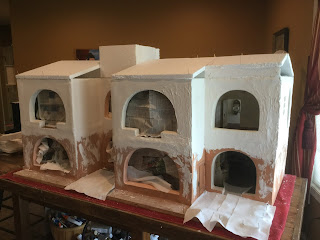 All the main roof pieces are loosely attached, and they all fit. 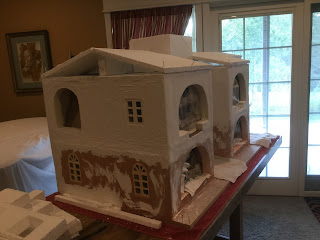 Another view, showing the support blocks on which the roof pieces rest. You can also see, in the background, our shrouded piano. Yikes! But so far, it's dust free. 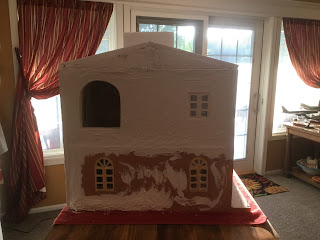 All the end pieces of the roof are in place. This is the west end of the villa... 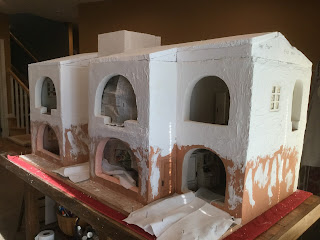 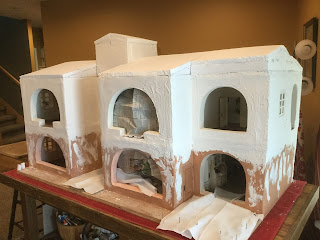 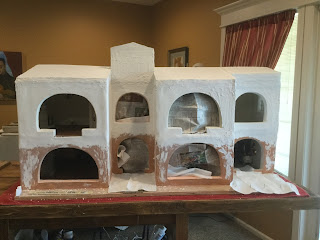 All the styrofoam roof and tower pieces have been stuccoed over. 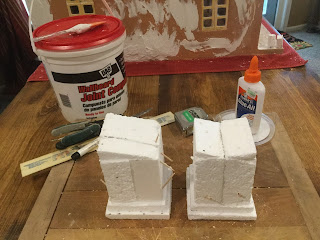 The styrofoam pieces for the two chimney stacks have been put together... 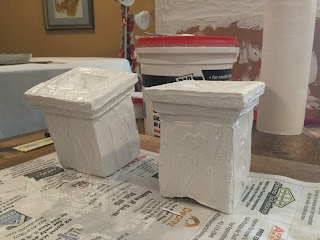 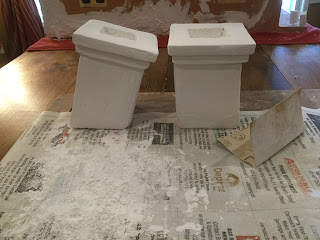 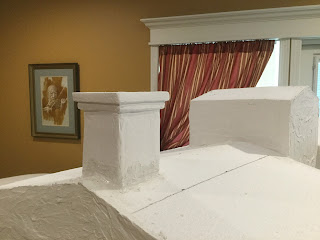 ...and secured in place. This is the west chimney, over the master bedroom and the living room. 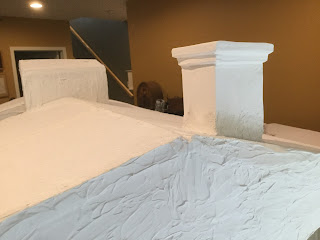 This chimney is on the east end, over the kitchen and the smallest bedroom. 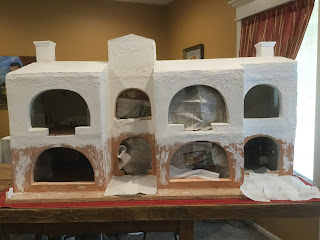 A front view of the villa with the tower and chimney stacks in place. 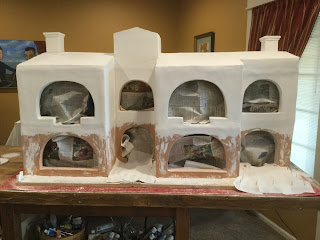 Sanding has been completed on the west end and the front of the villa. 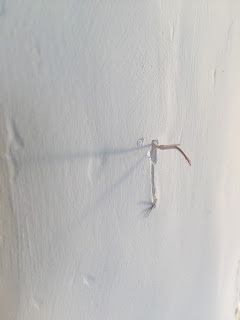 Then I moved to the east end, where I immediately sanded into the only wire that runs down the wall instead of up through the ceiling. OOPs! What have I told you about my jinx on all things electrical? Yep, broken off right at the wall. This is the wire to the pretty little wall light in the small bedroom - the light that caused all the trouble that I described in my last post. 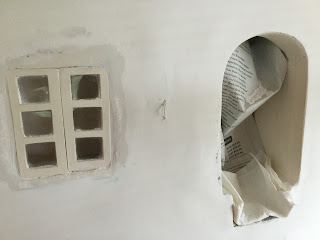 Robert the electrician wasn't home at the time, and I was sorely tempted to try to mend the wire myself quick before he returned. But we all know how that would have turned out. 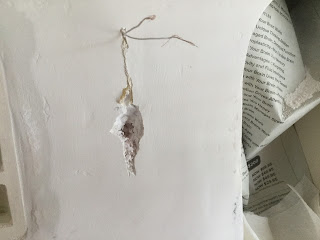 The break was too close to the wall to allow a simple splice, so Robert had to remove the broken wire and replace it. 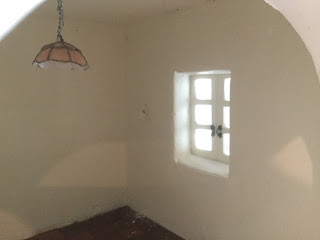 He also had to remove the light, of course, leaving holes in the wall, inside and out. 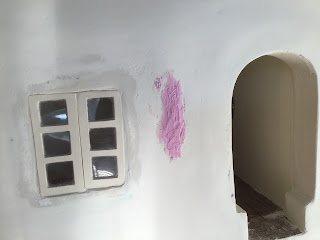 But the repair was successful, the pretty light works, the holes in the wall were easily mended, and I sanded again - ever so cautiously. I am, as always, thankful that STYROFOAM IS SO FORGIVING! Robert, however, may not have been so forgiving. In fact, he was practically downright grumpy. Strange. 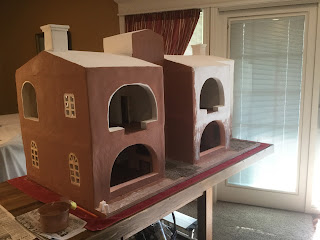 I've started applying a base coat of dark paint to the villa. The paint is not as dark as it looks in the photo. In fact, it appears different in every photo I took. But since this isn't the final color, maybe it doesn't matter. 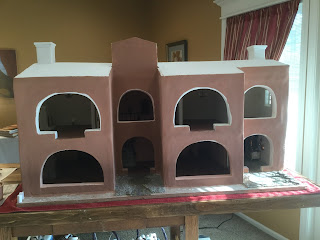 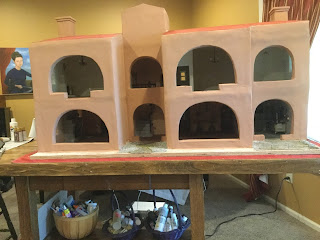 I also applied a brick red paint to the roof, so that the white styrofoam won't show through when I lay the roof tiles. The wall color here looks a little lighter than it actually is. 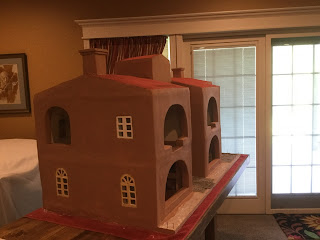 This is the darkest paint color of all! But it shows the tower roof somewhat better, so I included it anyway.


At last - the structure is beginning to resemble a villa-fattoria, even though there's a great deal of work remaining to be done, and even more fun remaining to be had! I'm looking forward to the change of pace as I continue working on the exterior of the villa. September is going to be chock full of activities that compete with villa time, but surely some progress will be made.

I wish you a kind and gentle September.