Finally! The long-awaited laying of the Roman tile roof for Villa del Vigneto is at hand. In fact, the tile work will be at hand for weeks to come! It's a slow, tedious job that alternates between being really boring and being really tense. And in spite of my efforts to make enough tiles beforehand to finish the roof, I'm still far behind the number of tiles needed. That may not be all bad, though - shaping and baking tiles as I go does afford a break from laying all those rows and rows and rows of tiles. I also broke up the monotony of the tiles in January by working on the villa's bathroom. I think that if I alternate working on the roof with working on the furnishings of various rooms, the entire villa, inside and out, may be finished at about the same time. That thought presents my usual dilemma: I can hardly wait to see the finished villa, but I can hardly bear to have it finished! 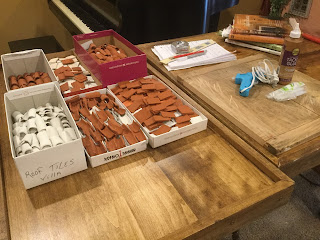 I have boxes of tiles and lots of glue ready to go. You'll notice that I've made tiles from both white and terracotta colored clay. I used Sculpey for the tiles, and I started with the terracotta color but found that it seems softer than the white and is harder to roll out and cut. I switched to the white. The finished roof will be painted to resemble aged terracotta. 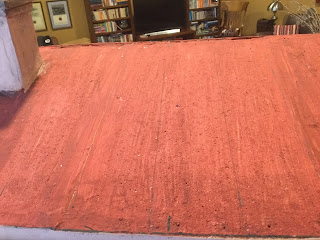 Robert, who is much taller than I am and doesn't have to stand on a stool for this sort of thing, drew guide lines on the roof to help prevent the tiles from wandering crookedly. The lines are faint, but they serve their purpose. 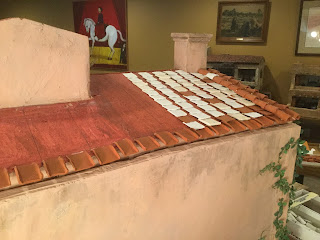 I started laying the tiles on the back portion of the roof. This photo shows a row of lipped tiles at the roof's back edge, several rows of flat tiles, and curved tiles that fit over the flat tiles. (In real life, all the flat tiles are lipped to properly channel the water, but I skipped that part because the flat tiles won't be visible - and I hope they won't have to channel any water!) 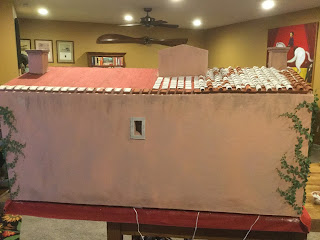 I'm making progress, moving along slow row by slow row. I have to stand on a small stool to reach the roof at a comfortable work height - very tedious, since my range of motion is limited to the stool. I'm using the piano, just an arm's reach from the villa, as my work table. It's a good height for holding the tiles and the glue that I need to reach without stepping off the stool. I use both hot glue and tacky glue for the curved tiles and tacky glue alone for the flat ones, which hold their position much more readily. 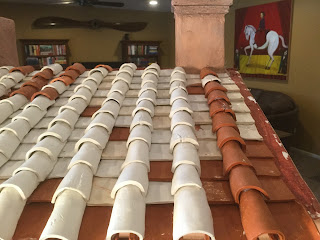 I've only been studying photos of Roman-style tiled roofs for about two years. So why did I not realize until JUST NOW that the outer edge of the roof needs a flat lipped tile instead of a curved tile? I tried to tell myself that maybe it wouldn't matter that I started with a curved row. But it did matter. I "slept" on the problem for a couple of days. It still mattered. So I worked out a solution that didn't require ripping up all the tiles I'd put down. I removed only the row of curved tiles from the edge, as you can see above. I also damaged some other tiles in the process, but they weren't too hard to replace. 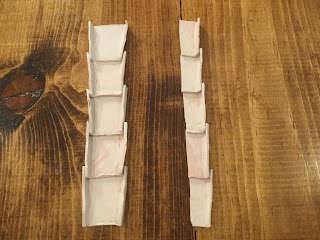 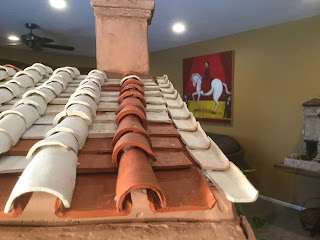 I glued on the lipped half-tiles to replace the curved tiles at the edge of the roof. 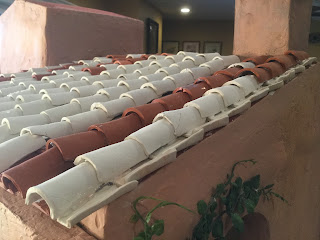 I added a new row of curved tiles that I squeezed in over the half tiles and the next row of flat tiles. The alignment isn't great - the edge tiles are too narrow, and the first row of curved tiles is too close to the second row - but at least the tiles are in the proper sequence. It's a patched-up piece of work, but I think the roof will look fine in the end. (The end being after all the painting and aging is done.) 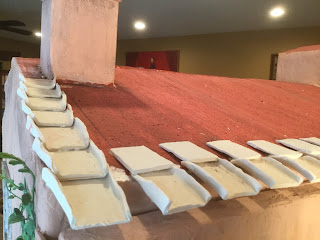 This photo shows the opposite edge of the roof with the lipped tiles laid as they should be. 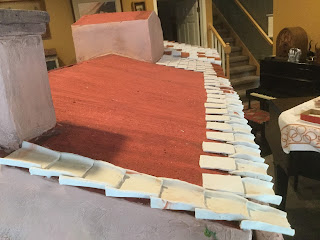 All the tiles are glued down on the end and back edges of the roof. 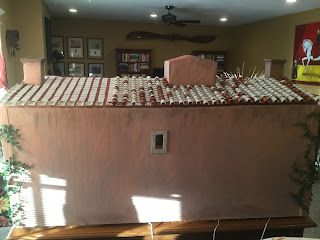 This much was accomplished on the roof in January - but the work goes on! 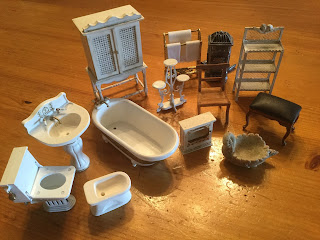 These are some of the furnishings that I considered using in the bathroom of Villa del Vigneto. As you'll see, the bathroom didn't have space for everything accumulated here, but I managed to fit in most things. Some of the pieces needed a bit of refurbishing or a complete makeover, as shown in the photos below. 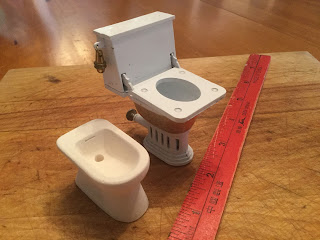 I had a hard time locating a bidet for the villa's bathroom. I finally found this one by Henry Bart, but it was only the basic form with no hardware. It was also 5/8" shorter than the toilet. 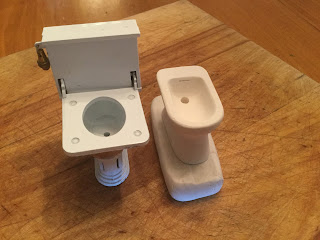 I shaped a chunk of Sculpey to raise the bidet to the right height. (Although it looks too high in this photo.) 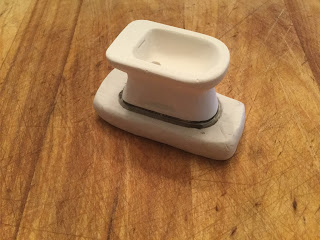 I drew the shape of the bottom of the bidet onto the Sculpey form... 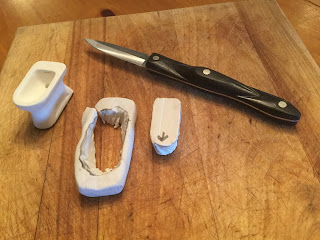 ...then cut out the shape with a knife. (A rough cut!) I baked the Sculpey cut-out.

The new base was glued onto the bidet - now the bidet and the toilet are the same height! 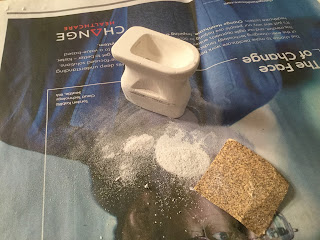 I sanded the new base smooth so that it blends with the original shape of the bidet. 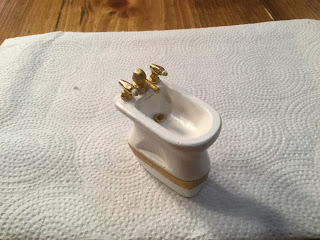 I fashioned some faucets from beads and painted them a metallic gold, then gave the bidet a couple of coats of Magnolia White paint and a coat of satin varnish. I painted a thin strip of tape the same metallic gold for the trim on the base. All done! 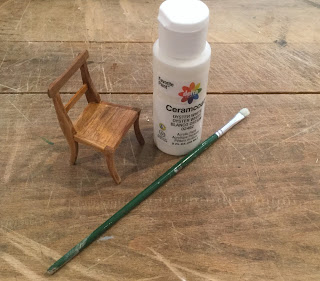 This chair came from my stash. I like the "countrified" shape, but I didn't want it too rustic - just old. 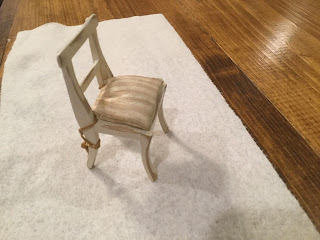 I gave the chair a coat of Oyster White paint, then sanded off some of the new paint for a bit of wear and tear. I made a cushion and tied it on with gold cord. 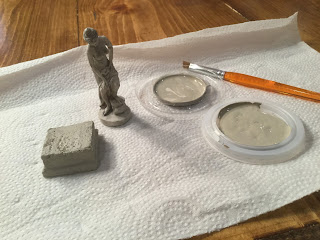 Even though I didn't include this piece in the above photo of potential furnishings, I really wanted to use this miniature copy of Santini's "Nude Woman Bathing" statue in the bathroom. It was a bit shorter than I liked, so I made a plinth from a square of wood and a square of Sculpey glued together. I layered on some joint compound and painted the plinth as close to the statue's color as I could manage. 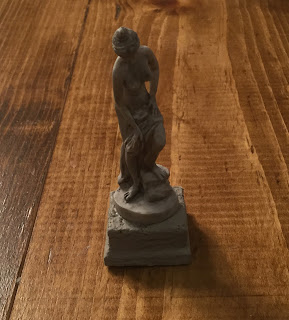 Glued to the plinth, the statue is now just the right height! 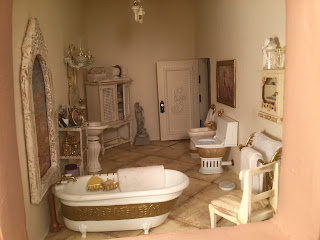 The villa's bathroom viewed from the arched opening on the west end.
The bathroom fixtures are from SP Miniatures "Estate and Vintage" listings. 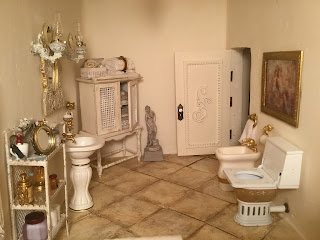 A closer view. The linen cabinet by S. Gustavian was a Christmas gift from Robert soon after I began construction on Villa del Vigneto. 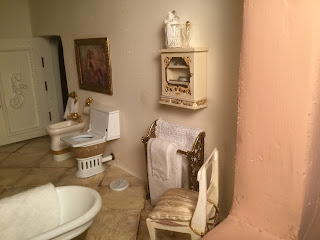 And a view to the right. The wall unit was an unfinished piece to which I added a few touches of paint. I can't find my source for the pretty brass towel stand, unfortunately. 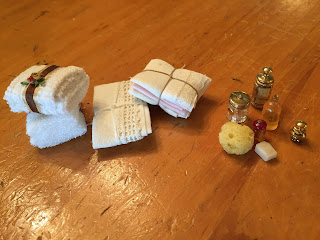 Elizabeth, from Studio E,  sent a box of treasures. These are just a few of the many lovely and useful gifts that were included. 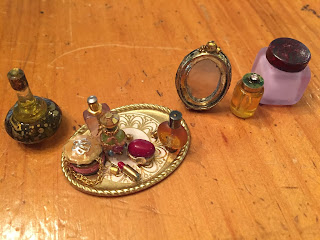 These are also items that were included in the gift box. There are other wonderful things from Elizabeth that I will show you as I'm ready to use them in various rooms in the villa. 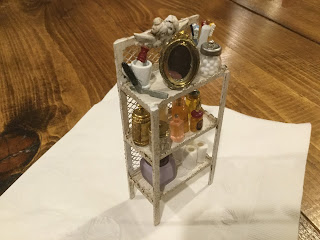 Some of Elizabeth's pretty gifts help to fill this etagere by Roberta Solari that I've placed in the villa's bathroom. Other gifts are on top of the bathroom linen cabinet and on the soap racks in the bathtub. Can you see them?

THANK YOU SO MUCH, ELIZABETH!

And so January, 2018, comes to a close - and I'm ready to celebrate that fact! January is my least favorite of all the months, and I impatiently count each one of its long, long thirty-one days. I'm more than eager to welcome February - the month of Love, the month of valentines and lacy hearts and dimpled cupids and CHOCOLATES.

And LOVE to all of you out there in Blogland.