Detours and Roadblocks Enroute to the Roof

Yes, the Sod House will eventually have a roof, when the time is right. I  believed that the right time had come, but when I sat down and thought about it, I realized that at least two things had to be accomplished before the roof could be raised. Those two things were simple things. Easy things. Which is probably why my mind had skipped right over them and gone straight to the top of the house. But I was right, in a way, because if this were a Real Life sod house, the roof would indeed have been in place before those two simple things needed to be done. But sometimes the miniature world sends us all topsy-turvy, and we must put carts before horses. So I hitched up the horse behind the cart, and, as could be expected, everything began to go wrong.

A Simple Dirt Floor: What's So Hard About That? 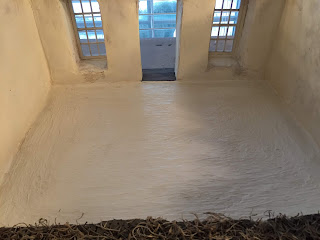 Rarely did a sod house have a wood floor, because of the scarcity and expense of lumber. Sometimes the prairie grass inside the sod walls was cut short and left in place, and for a while, until the grass wore away, it had the effect of soft carpeting underfoot. But most soddies had a dirt floor that was scraped, smoothed, packed, and tamped until it was as hard as concrete. Sweeping was the only care necessary; and if the floor became dusty, a little water could be sprinkled on to settle the dust. I decided to try to replicate a concrete-hard dirt floor by spreading on a layer of drywall compound and painting it a dirt color. 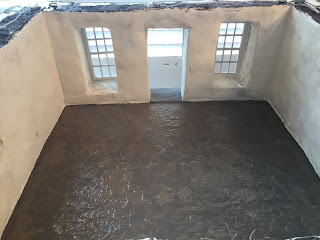 But the floor seemed almost too smooth. I stippled on globs of thick paint, hoping that as it dried, the globs would remain in place. 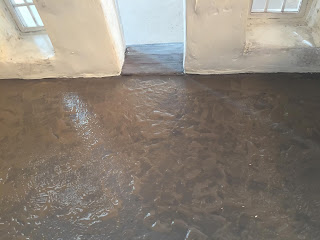 Instead, the globs gradually flattened out, leaving me back where I started from, except with an extra layer of paint. 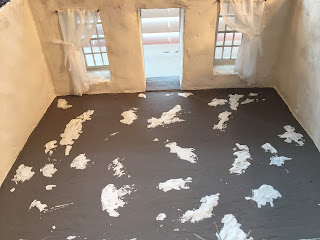 So I tried again by adding smears of drywall compound. 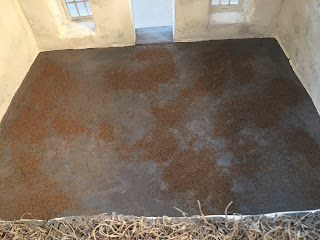 I found a bag of brown ballast (fine) in the model railroad section at Hobby Town that seemed a perfect dirt substitute. I wanted just a faint sprinkling of loose dirt on the bumpier spots of the floor. But when I sprinkled it on over glue and let it dry, the material looked too granular, and was a completely wrong color. 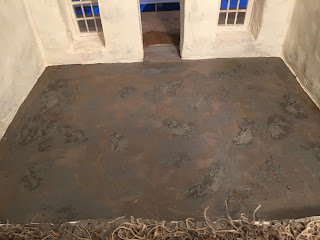 With a putty knife, I scraped off the whole mess. This was exciting: the floor had changed from worse to worst in sixty seconds flat! 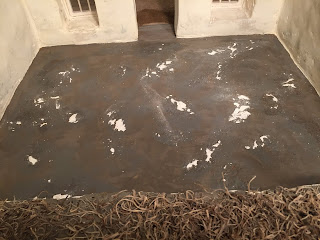 I decided there were maybe too many bumps, so I sanded down the drywall compound until the floor felt smooth again. 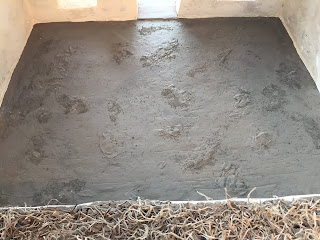 I repainted with the original color; but all that sanding was in vain. The bumps hadn't disappeared afterall. 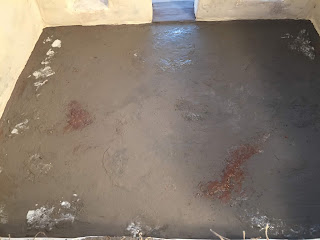 I rummaged through my drawer of "aging" materials and found a container of taupe eye shadow that I just knew was going to be the perfect thing to achieve that loose-dirt look. I scraped the eye shadow into a small cup and mashed it up until it was smooth and powdery. Then I applied some glue in small random patches and sprinkled on the eye shadow, which instantly was no longer taupe, but a sort of tobacco brown. I cleaned off all that mess and repainted.
And that's where I've left my concrete-hard dirt floor, until I come across something that looks like taupe-colored dirt. And why, you may well ask, doesn't she just go out and dig up some Nebraska dirt and try again with the real thing? The answer is, that's exactly what I plan to do as soon as (if ever) the temperature climbs above freezing and a foot of snow melts off my dirt. 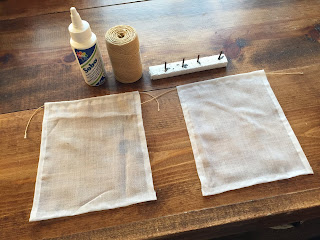 I knew that hanging curtains would be very difficult if I waited until there was a roof to impede my movements and my working light. I chose a soft, lightweight fabric, sparkling white, so that the meager light entering the soddy wouldn't be diminished by the curtains. The curtains aren't necessary for privacy in the vast emptiness of the prairie - but they are necessary to add a touch of softness to the sparse soddy interior. I cut the fabric to the correct measurement, then turned under and glued the raw edges, leaving a wider rod pocket at the top. 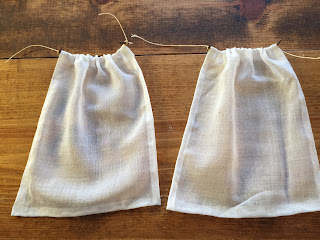 I made pegs from the ends of toothpicks, although they're barely visible in this photo. The pegs will be inserted into the wall to hold the curtains. Twine was threaded through the rod pocket and wrapped, then tied, around the pegs. 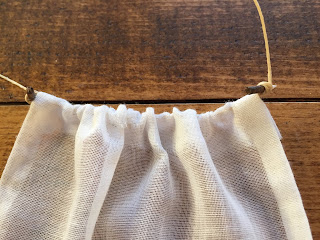 A closer view of the pegs and twine. The excess length of twine will be snipped off before I hang the curtains 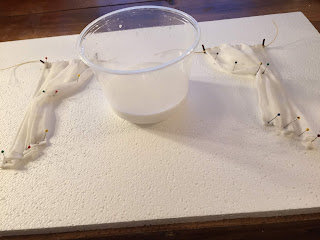 I dipped the curtains in a mixture of glue and water, pressing out the excess mixture. 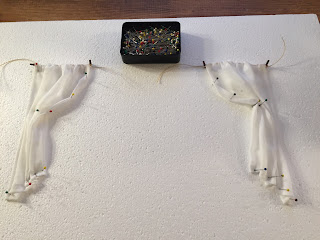 The curtains are shaped and pinned in place to dry before adding the tie-backs. 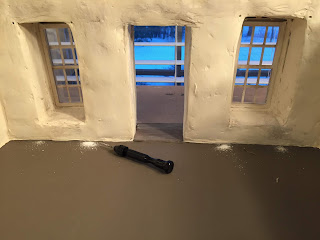 I used one of my smallest drill bits to drill holes on each side of the windows where the pegs will be inserted. 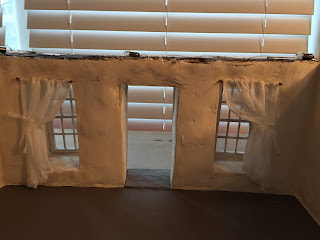 After adding the tie-backs to the dried curtains, I dabbed glue onto each peg before inserting it into place in the drilled hole. 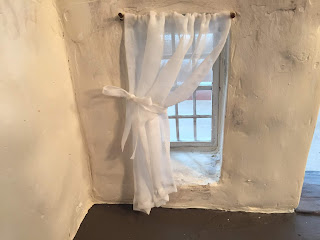 So far, so good! The curtains hang naturally and will block only a bit of available light from the window. This is the southeast window. 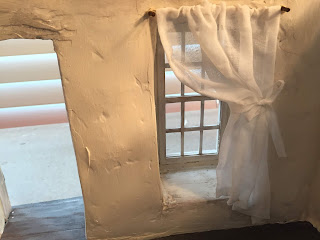 This is the southwest window. The cookstove will be nearby on the west wall. The wall will be smoke stained. The ceiling will be smoke stained. I suppose the sparkling white curtains won't escape the smoke stains, so realistically I should stain them up a bit. It's also quite likely that dirty rain water will wash in from the top of the window, so a few water stains would add another touch of realism. 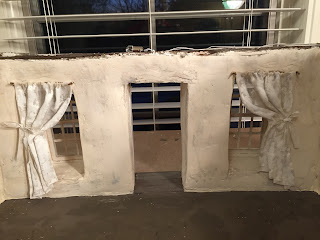 So I pretended to be smoke stains and dirty rain water stains, and I stained and stained, a slight bit more on the west than the east side. I used a soft brush and did all the staining with the curtains in situ. I thought that I was being very moderate in applying the stains, but when the curtains dried, I was appalled at how really filthy they looked! This will never do; the hard-working, homesteading woman of the soddy would be mortified to have those curtains hanging in her house. 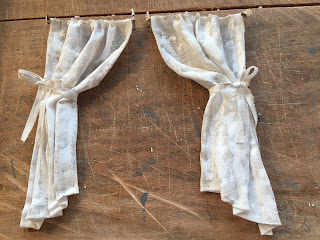 I took the curtains down and tried to cover the stains with white paint, which transformed worse to worst, just like the floor fiasco. 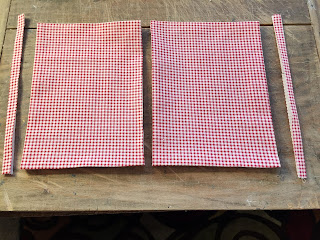 So I started all over again with a fabric that isn't sparkling white. 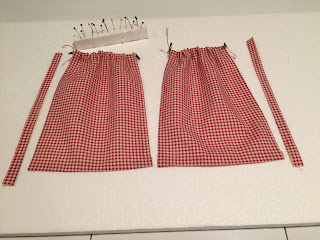 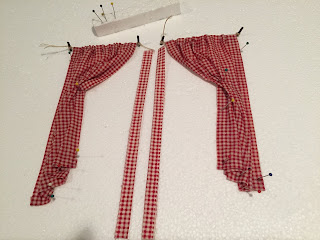 Dip in a glue/water mixture, then shape and pin. This fabric is heavier and doesn't shape as easily or hang as naturally. It also weights down the twine so that the curtains sag a little, but that does seem more realistic to me, since twine isn't rigid.

That's All She Wrote 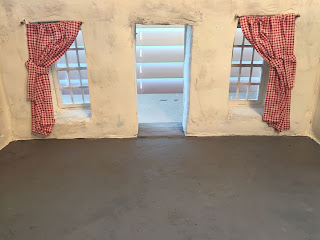 This is what I have to show for a LOT of time spent on the soddy: sagging curtains and a recalcitrant floor. But I'll conquer the floor yet, and I've decided to let the homesteader take care of her own curtains; she has a sewing machine, and I'm sure she's a better seamstress than I am. So all is well, and I've finally got the horse and cart in their proper places. I'm very eager to get on to the NEXT THING - the ROOF!