Getting Settled in the Soddy (Part Three)

Robert and I have been traveling for a couple of weeks, away from Nebraska and its grasslands, cornfields, and far horizons - and its pioneering history in which I've become so immersed during the past months. We've driven through mountains (!) and taken ferries across large bodies of water and walked through forests of tall pine trees. Is it any wonder that I'm feeling a bit out of touch with Ruby and Will and their little soddy on the treeless plains of Custer County, Nebraska?

But it's time now to take the final steps toward getting the young homesteaders settled in their soddy. Because the soddy is small and dark and crowded with the belongings that Ruby and Will have carried in their covered wagon from Indiana, I've found it necessary to photograph some of those belongings individually in order to have them shown to best advantage. There will also be a "tour" of the interior of the soddy to end this post. (You may have been expecting a tour if you remember my fondness for such things!)

Making a (Sod) House Into a Home 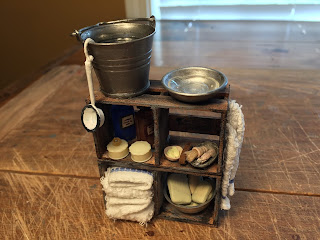 Ruby turned these useful, multi-purpose packing crates into a washstand which also holds a pail of fresh water carried from the nearby creek. 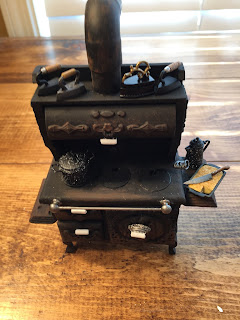 The stovetop is a convenient spot to store Ruby's irons; they're always at hand when she needs to heat them on the stove for an ironing session. She has just taken a pan of cornbread from the oven and cut a small piece to "test" it. Yum! 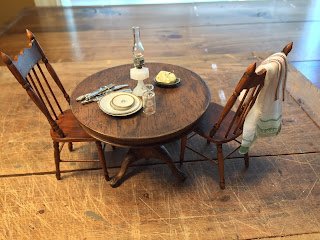 Having removed her apron, Ruby is preparing to set the supper table. She has  finished her churning and has set out a dish of fresh butter to have with their meal of cornbread and beans. Ruby knows 33 ways to prepare corn. (Nebraska has earned its title as the "Cornhusker State.") 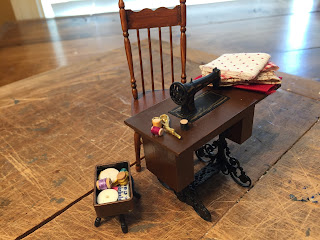 The sewing machine is an almost indispensable item for Ruby's housekeeping requirements, so room was found for it in the crowded wagon as Ruby and Will began their move to Nebraska. Ruby's sewing box rests on a stool close by. 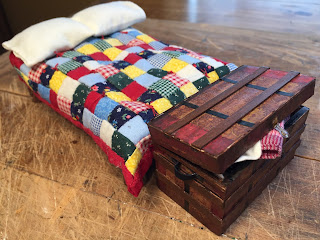 A bed made from cedar posts and rope; a soft feather mattress; a bright quilt made by loving hands. These things make for a good night's rest. The trunk lends a helping hand by making it hard for unwelcome visitors (such as mice, bugs, spiders, snakes) to invade clothing, linens, and other important items. I hope Will and Ruby remember to close the trunk's lid securely. 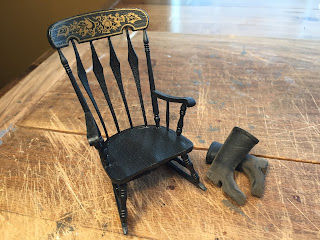 The rocking chair very nearly had to be left behind, to Ruby's great disappointment. But Will's ingenuity in loading and packing the wagon saved the day. Ruby sometimes has to borrow Will's rubber boots after a hard rain. If water has leaked into the soddy, the dirt floors can be a problem. Ruby has to pin up her skirts to keep them from dragging in the mud as she sloshes about the soddy. Fortunately, the sod roof is as watertight as possible and leaks only during the worst downpours. Of course, sometimes it continues to leak for two or three days after the rain has stopped, while the roof slowly dries itself out. 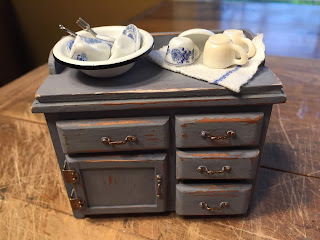 This hand-me-down cabinet is a great help to Ruby; it gives her extra storage space and provides an adequate surface for the daily dishwashing. 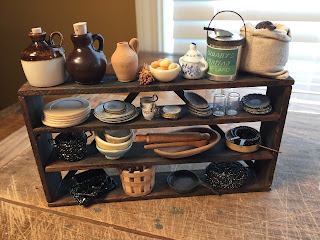 Will made this important piece from a large packing crate; the shelves store most of the items that they need for daily use. 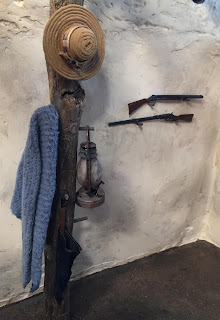 Will has hung his shotgun and rifle within easy reach. He doesn't often hunt for meat, but is ready for any passing turkeys, prairie chickens, or elk.

Time for a Tour

Now that Ruby and Will have arranged their household goods and feel settled and at home in the soddy, they'd like to share their pleasure with you. If you follow along clockwise from the front door, it won't take long (maybe only a moment!) to see the entirety of this humble, happy home. 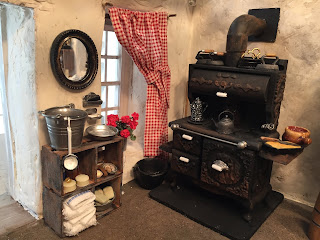 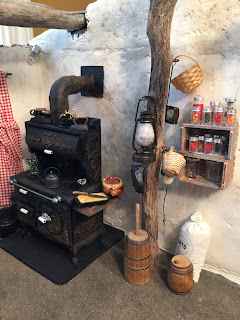 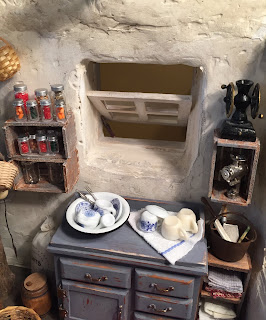 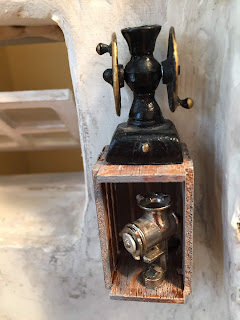 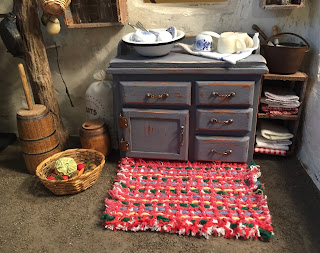 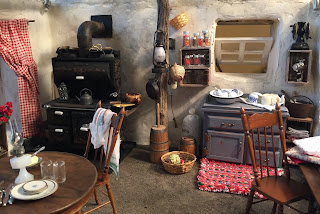 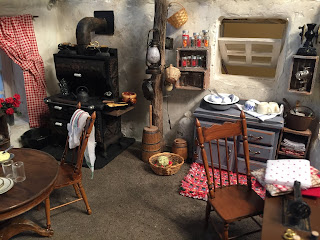 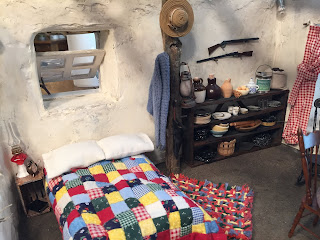 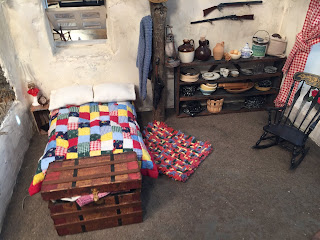 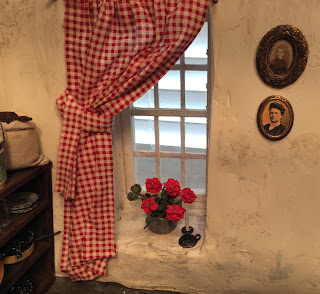 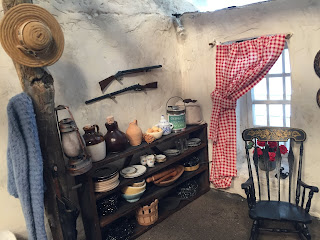 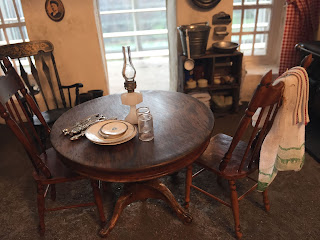 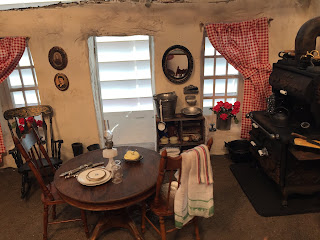 And here are a few views of the small room, with sod walls and a dirt floor, that  Will and Ruby have built with care and made into a home. 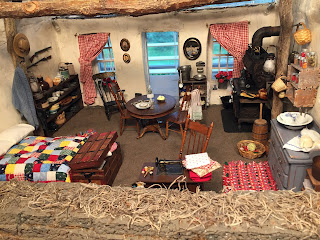 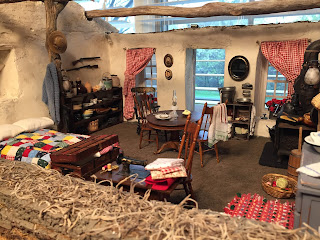 And now...the cart is complete, so it's time to hitch up the horse in this topsy-turvy construction plan. Yes - finally, it's time to put the long-awaited sod roof on this sod house! The roof is already under construction, and you won't be a bit surprised to learn that it's a bit touchy and problematical, but I expect to get the best of it yet. I sincerely hope.