Progress on the Nebraska Sod House is being made, although slowly and not very steadily - rather by fits and starts. The soddy itself is finished, (complete with roof) and all that remains to be done is the landscaping of the exterior. I use the word "landscaping" loosely, so please erase from your mind visions of pretty  flower beds and green grass and brick paths. This prairie land is harsh, prairie life is hard, and often there are only enough hours in the day to take care of the bare necessities of living.

One of these necessities is fuel to cook the meals and heat the home. There is no firewood to be found on these treeless plains. Cornstalks are one source of fuel; twists of hay or dried grasses are another, as are dried sunflowers. But the most abundant and readily available fuel is spread widely over the prairie, free for the taking, contributed first by the great herds of buffalo that once roamed the plains, and later by the great herds of cattle driven up from Texas through the plains of Nebraska.

Gathering this plentiful, miraculous fuel in the form of dried buffalo or cow chips is one of Ruby's daily chores. She needs to collect not only a daily supply, but must also gather enough to stockpile a supply for the winter, when the prairie - and the fuel - will be covered with snow. When Ruby and Will first arrived in Nebraska and began setting up their home, Ruby, a little fastidious and unused to such a chore, made sure that she wore sturdy gloves as she started on her daily fuel-gathering rounds. Now, after several months of soddy life, she thinks nothing of gathering cow chips or stoking the stove with her bare hands! 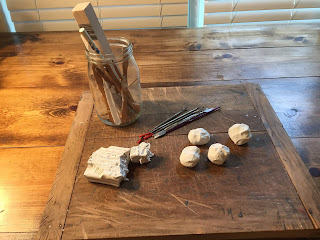 I decided that the best way to make cow chips would be to use Sculpey, an oven-baked clay that is one of my favorite materials. 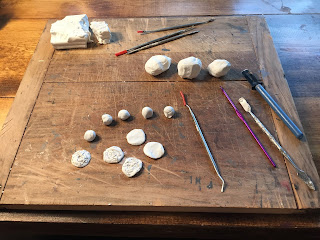 I softened the clay by kneading it, then pinched off small bits to flatten into the cow chips. I used a variety of metal tools to make a sort of spiral design in the clay. 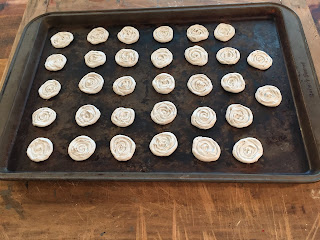 The first batch of cow chips is ready to bake... 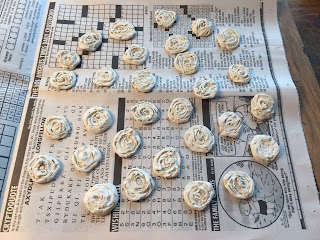 ...and ready to paint 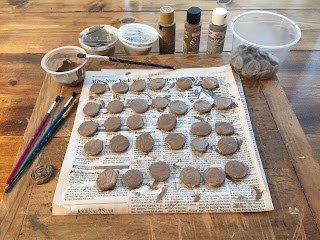 The undersides of the chips have been painted. 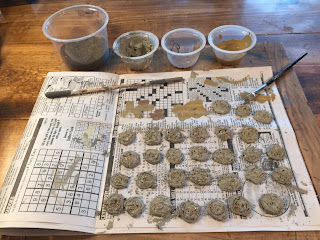 I applied several coats of paint using different colors of paint. For the final coat, I mixed bits of a grass-like material into the paint to add some texture. One batch is finished. 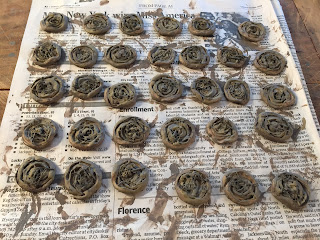 And a second batch is all done, for a total of 62 chips. 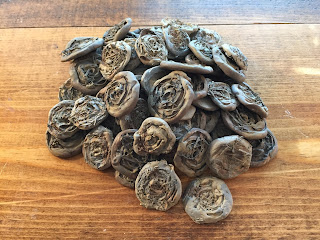 This pile of sun-dried cow chips, stacked outside the soddy, should keep the home fires burning for a few days!

Another obvious necessity of daily life, of course, is food. Ruby and Will are growing their own vegetables, and wild fruit can be found in the thickets of plum trees and sand cherry bushes scattered across the plains. Will hunts for rabbits, prairie chickens, and pheasant, and on two occasions has brought home an elk, sharing the meat with his neighbors. He learned that a fine tradition has been established among the homesteaders. Although no one can tell him for sure how the tradition originated, it dictates that he display the elk antlers on his property, perhaps beside his soddy or even in easy view on the roof. Women make use of the antlers to lay out the weekly wash to dry, and children often use the stacks of antlers as their playground. Even though Will doesn't have a large stack of antlers, as do some of his neighbors, he has proudly placed them near the soddy, in sight of any passing traveler. 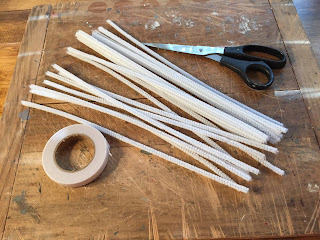 After long and careful thought and numerous mind changes, I decided that pipe cleaners would be my best choice for antler material. 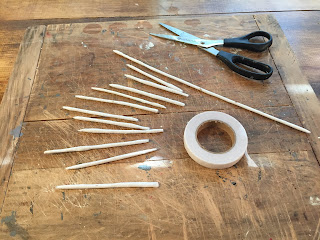 I cut the pipe cleaners into pieces about 3" lengths - or shorter - and wrapped them snugly with floral stem tape. 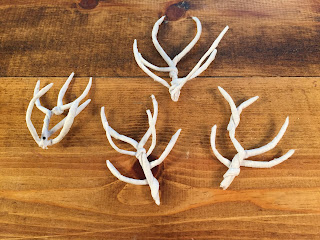 By twisting the long and short lengths together, I achieved a very rough depiction of antlers. 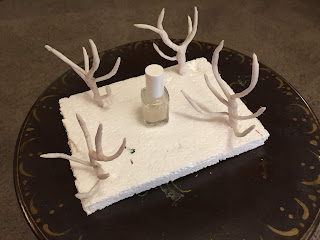 I wrapped more floral stem tape around the twists and joins, stabilizing with glue. After the glue dried, I applied several coats of clear matte nail polish, trying to achieve a bone-like finish. 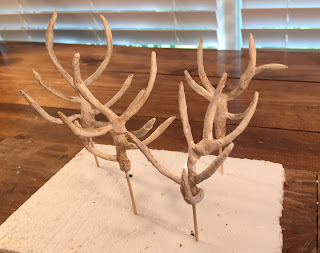 For a finishing touch, I added some taupe paint to reduce the whiteness of the "bone." 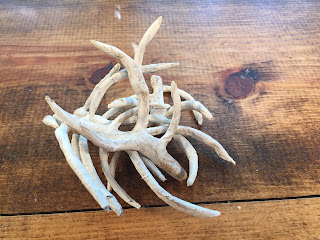 Now Will can display his hunting prowess in keeping with the prairie tradition.

RENEWAL OF THE LANDSCAPED ROOF 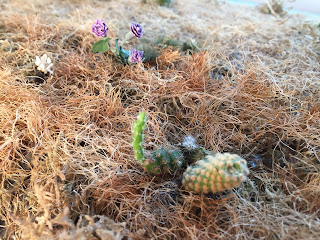 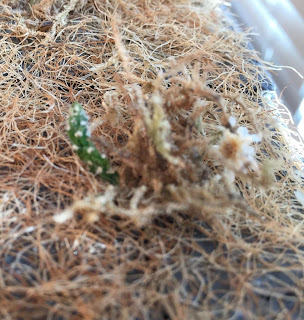 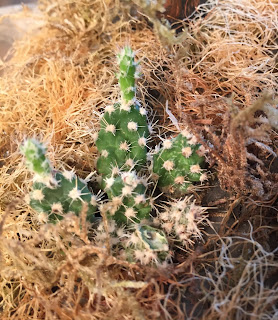 I have to share these photos of the cactus plants on the soddy's roof. I had dug up the pieces of cacti on our Sandhills property, snipped off the tiniest bits, sliced off the ends, trimmed the thorns, dried them, sprayed with a dried-flower preservative, and glued them firmly onto the styrofoam "sod blocks" on the soddy roof, where the pieces nest in the "prairie grass" of roasted corn silk. And, as you can see, after ALL THAT, these tiny bits of cacti are still putting out new growth! How do they do that? Where will it end?

SO - work proceeds on the soddy's exterior landscaping, making use of the natural prairie that extends almost to the front door. Speaking of doors, I keep forgetting to build that front door! What must Ruby and Will think of my laxity? I think a door must surely be the NEXT THING to happen! I hope you'll stop in for my next post and see whether my prediction comes true.