This post continues the saga of my miniature adobe house. I'm trying to condense about ten months of construction into a few posts of somewhat reasonable length, so I hope that I haven't skimped too much on the photographs and that you'll be able to follow the construction process without confusion.

I promised in my last post that I would add duct tape and plaster to my usual construction materials  - and so I have done; my slightly slap-dash methods sometimes yield satisfactory results!

The first level of the adobe house is in place; it's time to add the second level, which will be comprised of a bedroom that opens onto an upper courtyard. 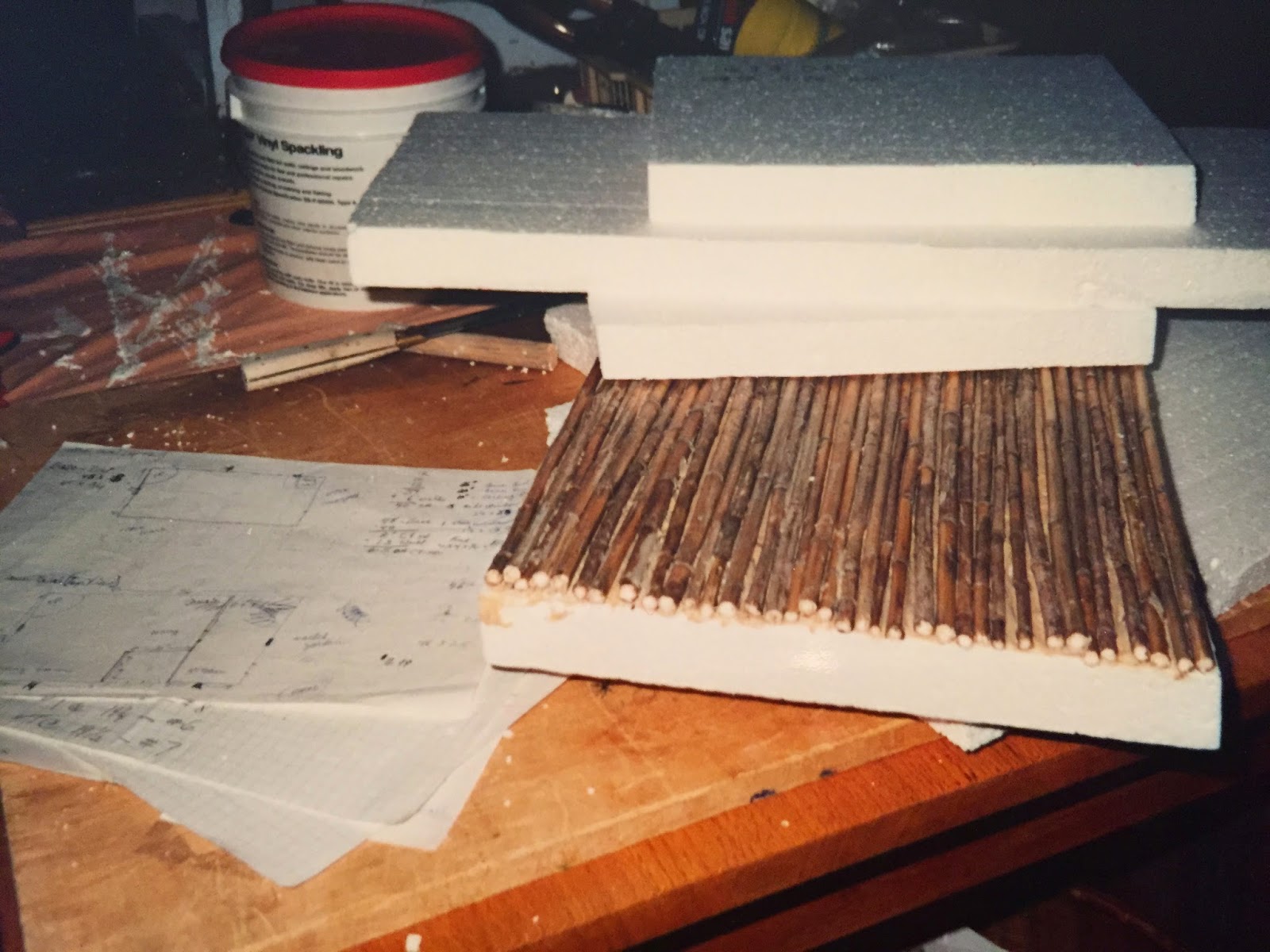 The styrofoam wall pieces have been cut, and the upper-level ceiling is all ready for the vigas to be glued on. 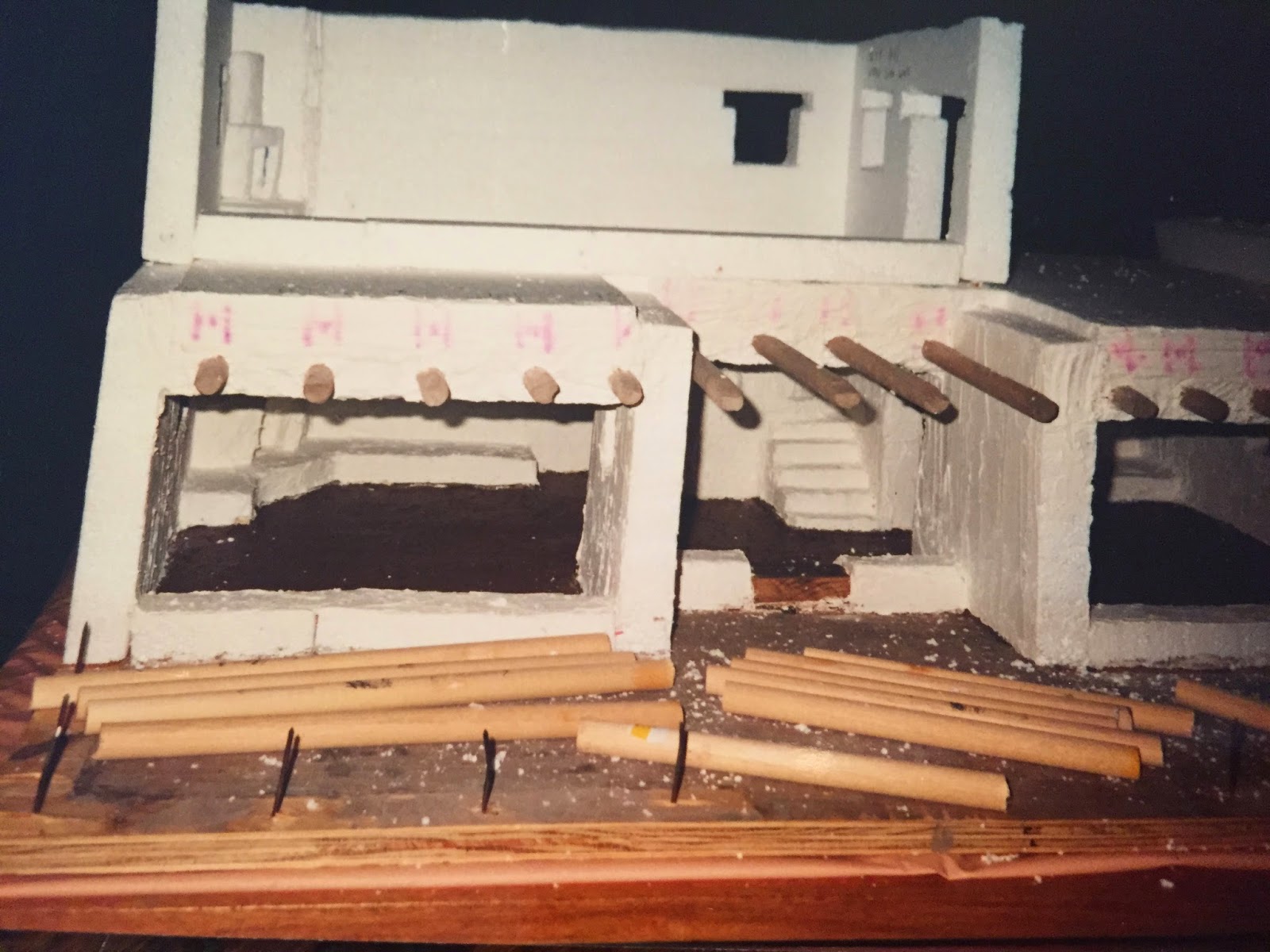 I'm not sure why the house seems to lean drunkenly in this photo. My construction skills aren't that bad, surely, so my photographic skills must be lacking.
The upper-level walls are in place, and I have built a kiva fireplace in the corner of the room. 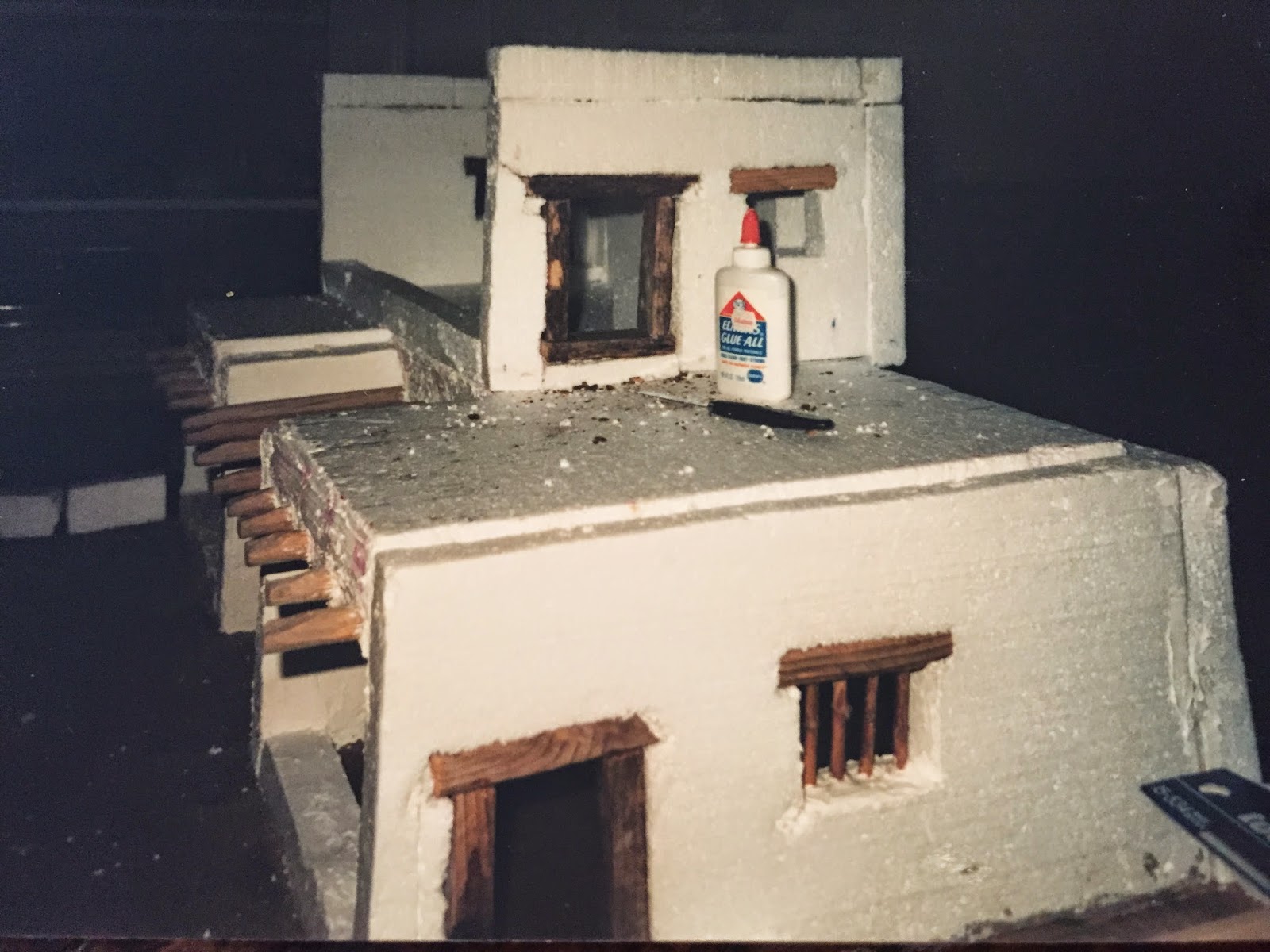 The door and window frames, made from pieces of barn wood, are in place. 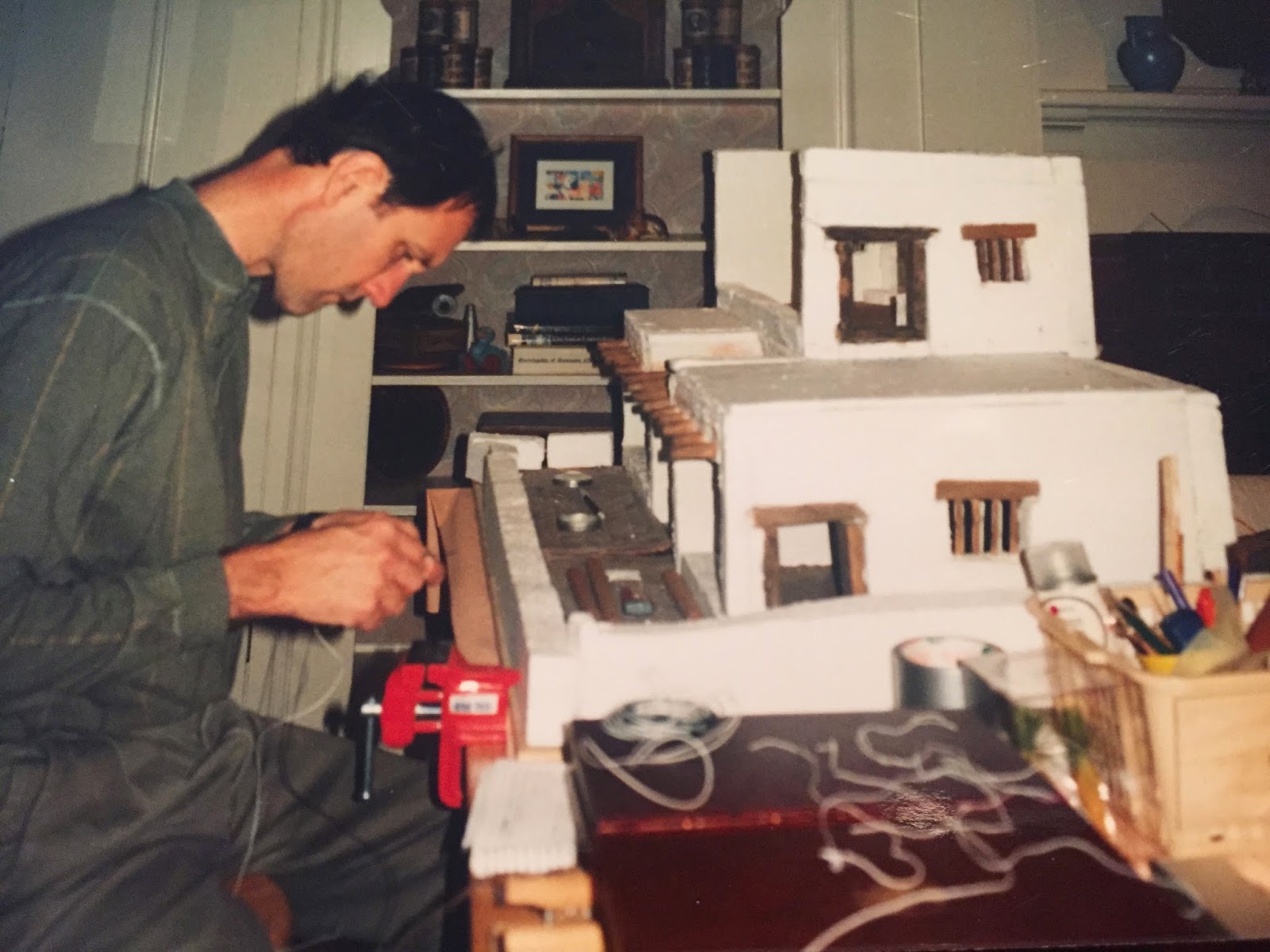 My husband, Robert, is my electrician; he's shown here completing the wiring for the display and fireplace lights. (And oh my, how young he looks twenty-three years ago!) My choice of the 1850s vintage for the house precluded having electricity for actual household lighting. The occupants, Joseph and Ana Luisa Cantrell, who are only ghostly forms in my mind at this point, must make do with candles and kerosene. 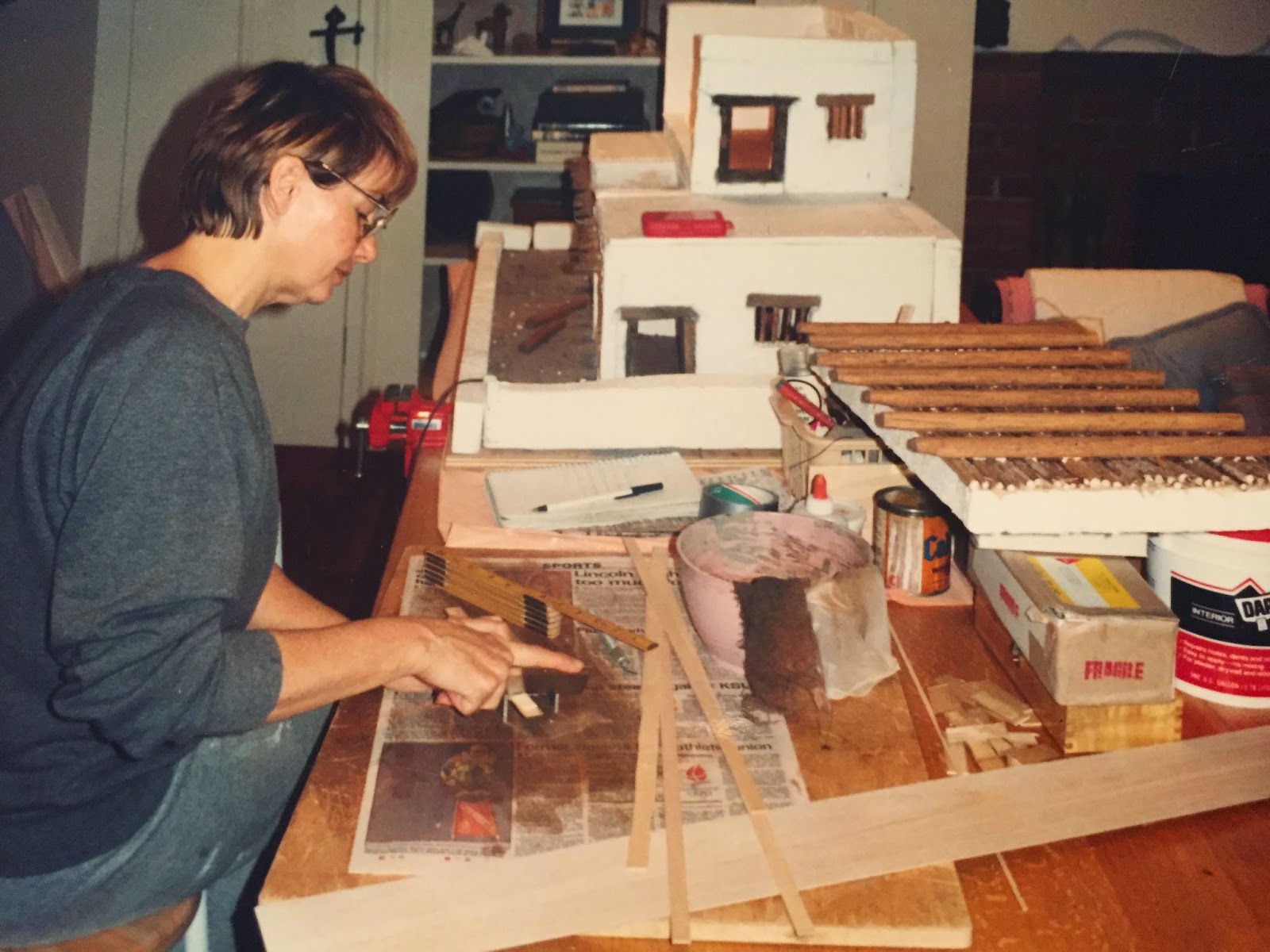 Here I am, cutting and staining the boards that will be used for the upper-level floor. Thankfully, sawmills had been established in New Mexico by the mid-19th century, so when Joseph Cantrell learned there was actually one in their vicinity, he wasted no time in ordering the lumber to use for the new floor. My only regret is that he hadn't known about the sawmill in time for me to avoid the fiasco of pouring the earthen floor for the lower level! 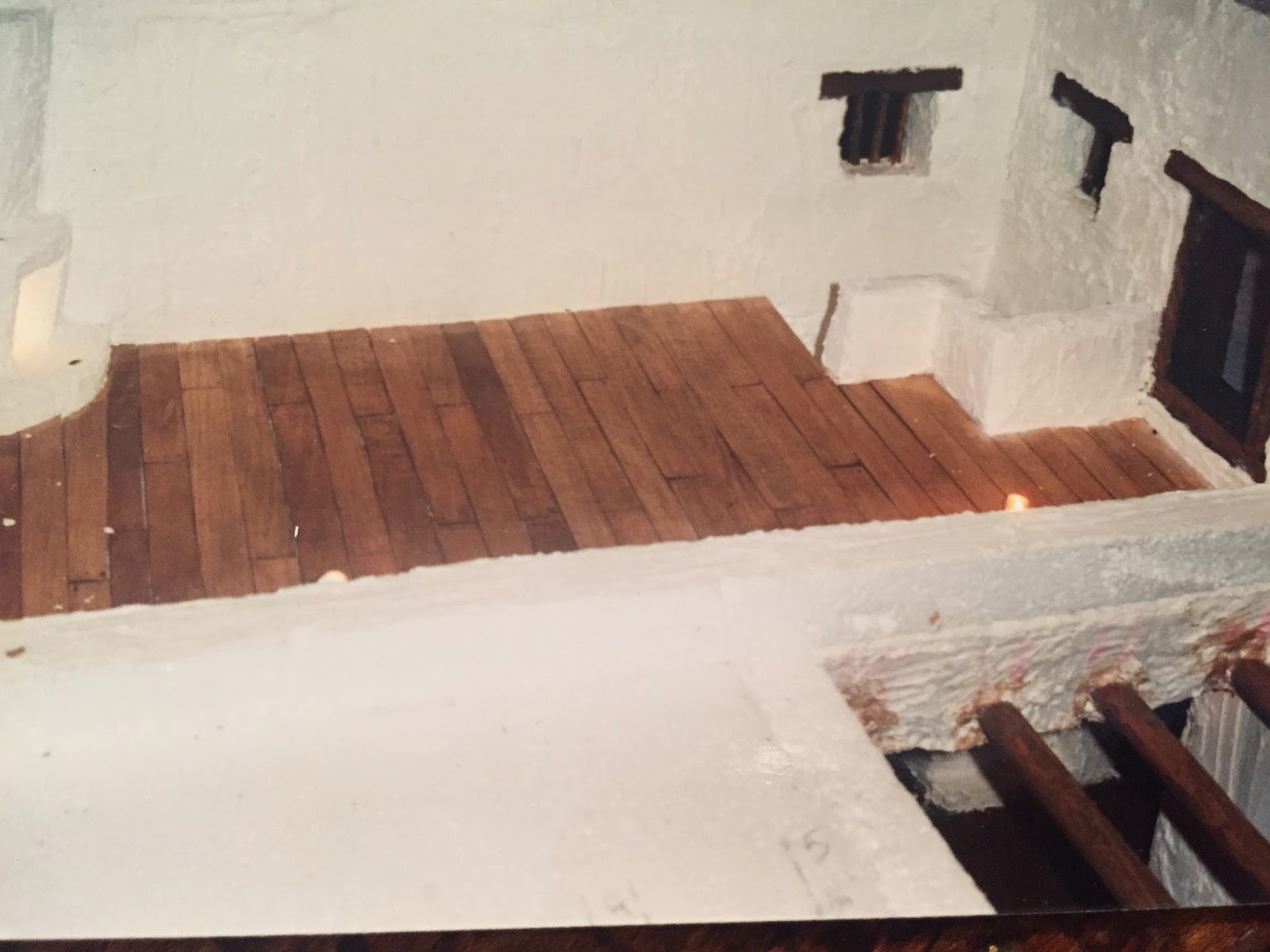 The wood floor for the bedroom is finished. I also built in an adobe stair banister. 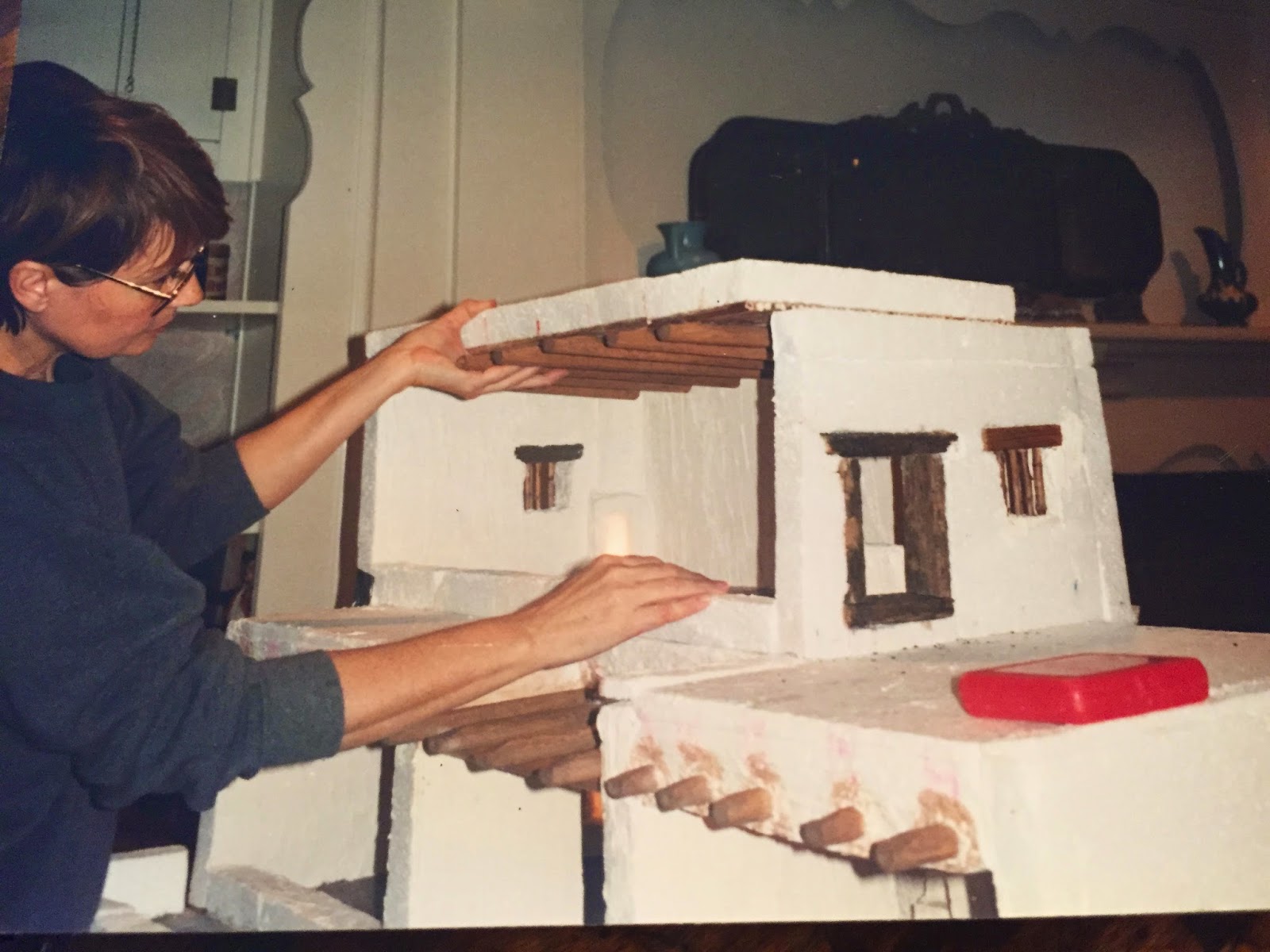 The vigas have been glued in place on the upper-level ceiling/roof piece, and…..the ceiling is on! 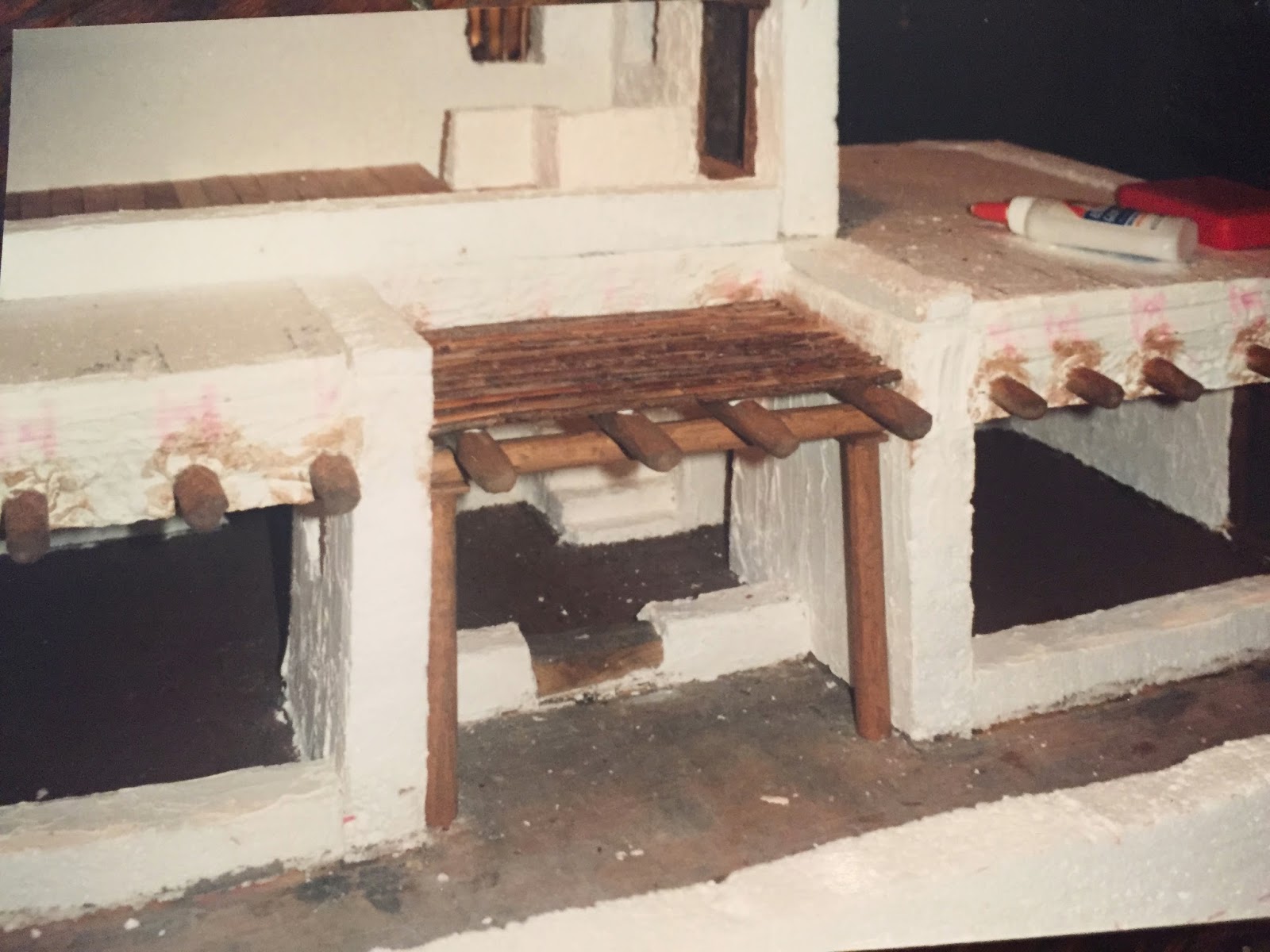 The portale, or entrance, is complete. The portale was constructed from hand-hewn dowels just as the vigas were. 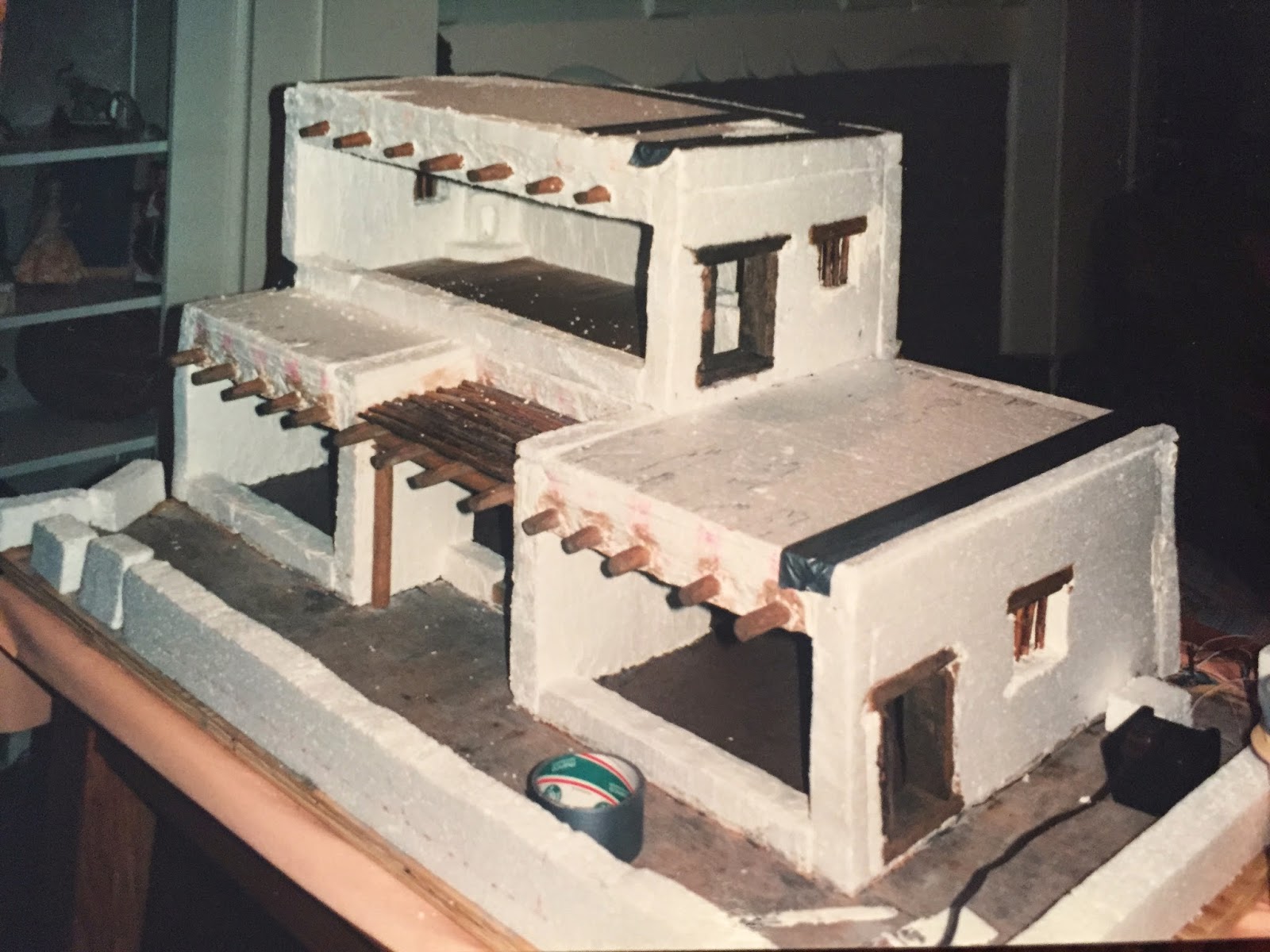 I found that duct tape was a good solution for the small gaps and cracks left between the styrofoam pieces during their assembly; it adheres well to the styrofoam and also is easily covered over with plaster. 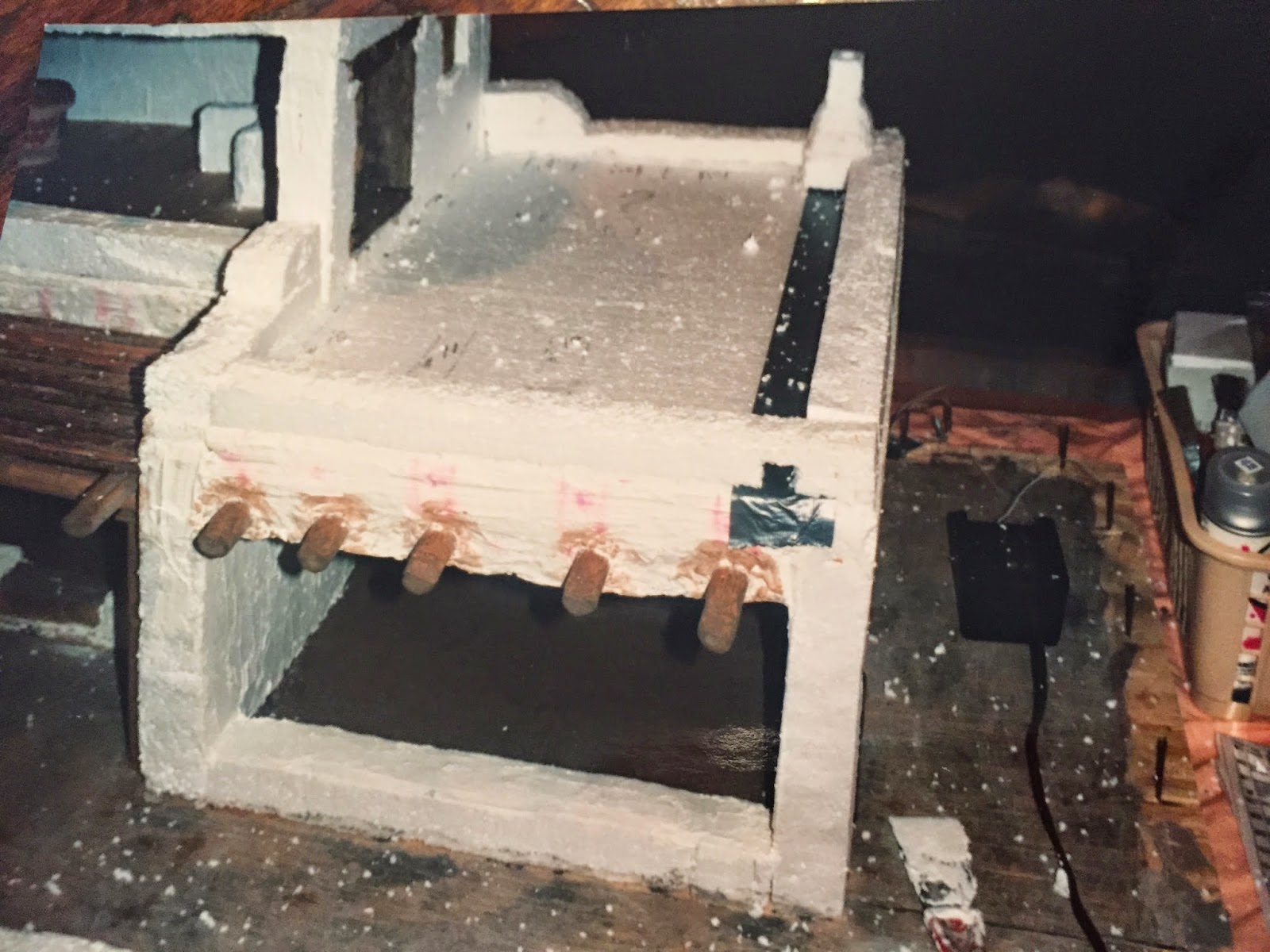 This photo shows the roof parapets and chimneys that I cut from styrofoam; the pieces were installed on the roof using toothpicks and glue. Styrofoam is amazingly forgiving of errors; mistakes are easily corrected by adding on a sliver here or by slicing off a sliver there. (I am not admitting that I ever make a mistake; just stating a fact.) 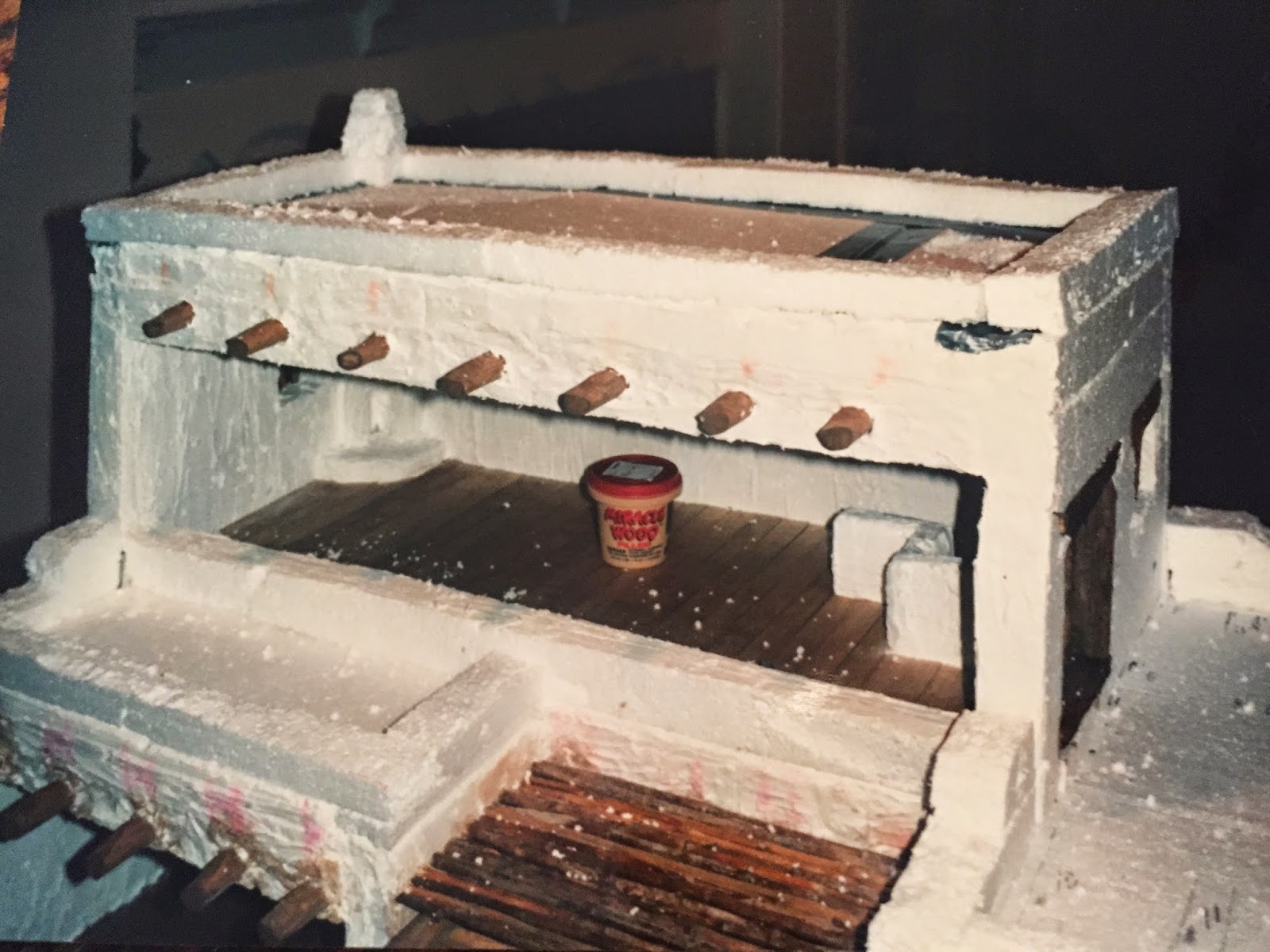 Parapets and a chimney have been added to the upper roof, and parapets have been built on the small balcony outside the bedroom. 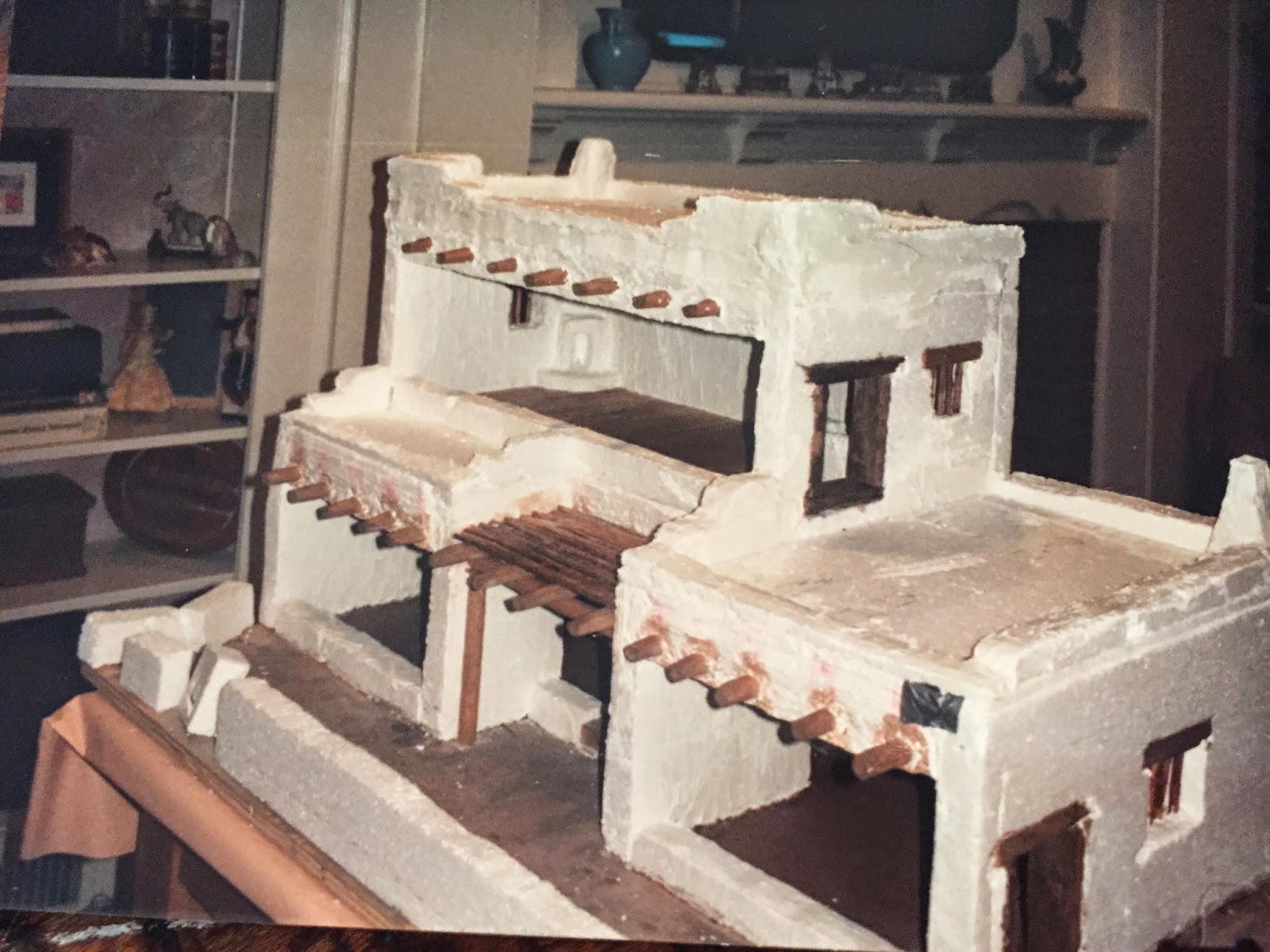 I have begun plastering the upper level, using a vinyl spackling compound. 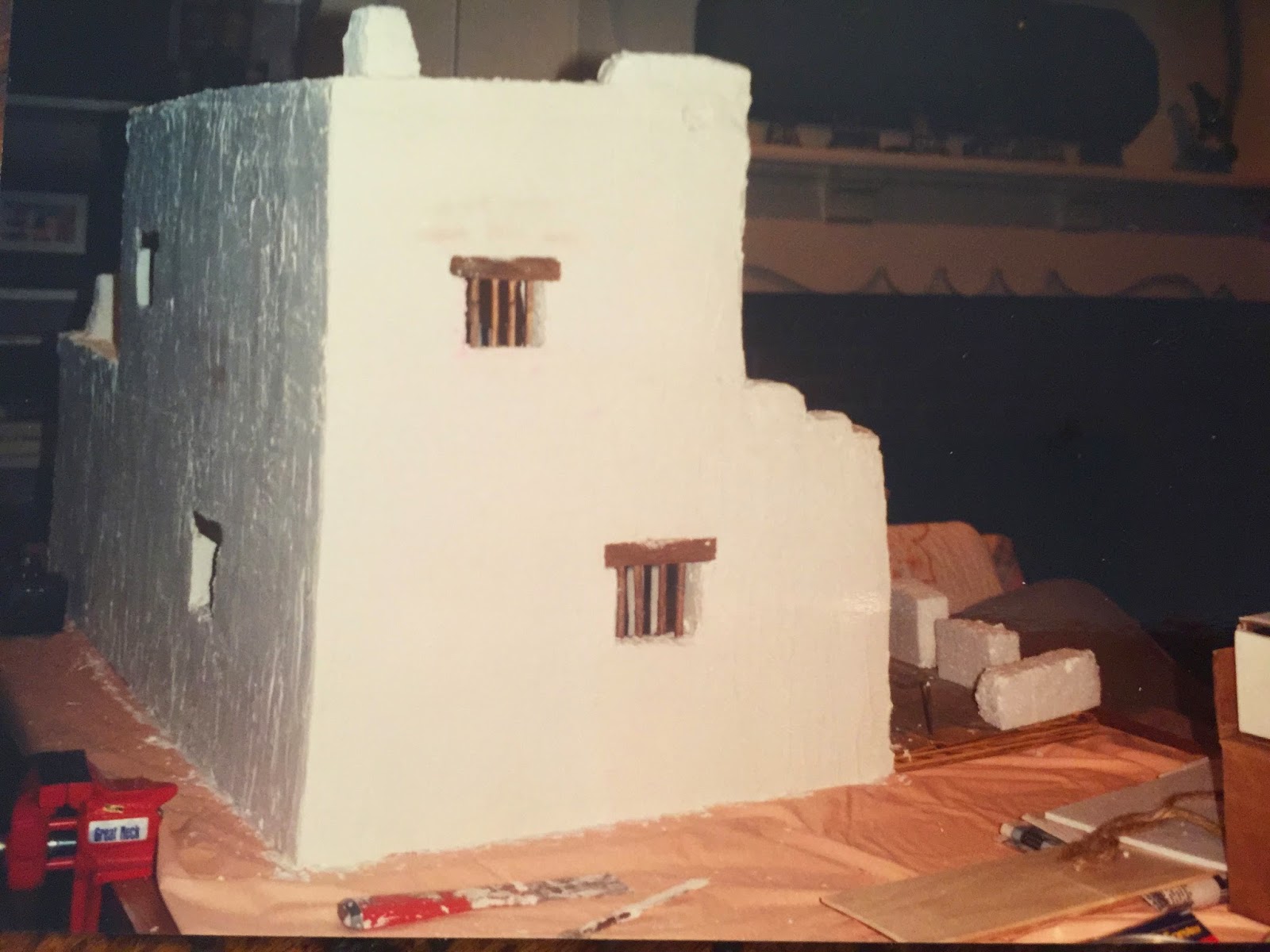 The plastering continues on the adobe house. 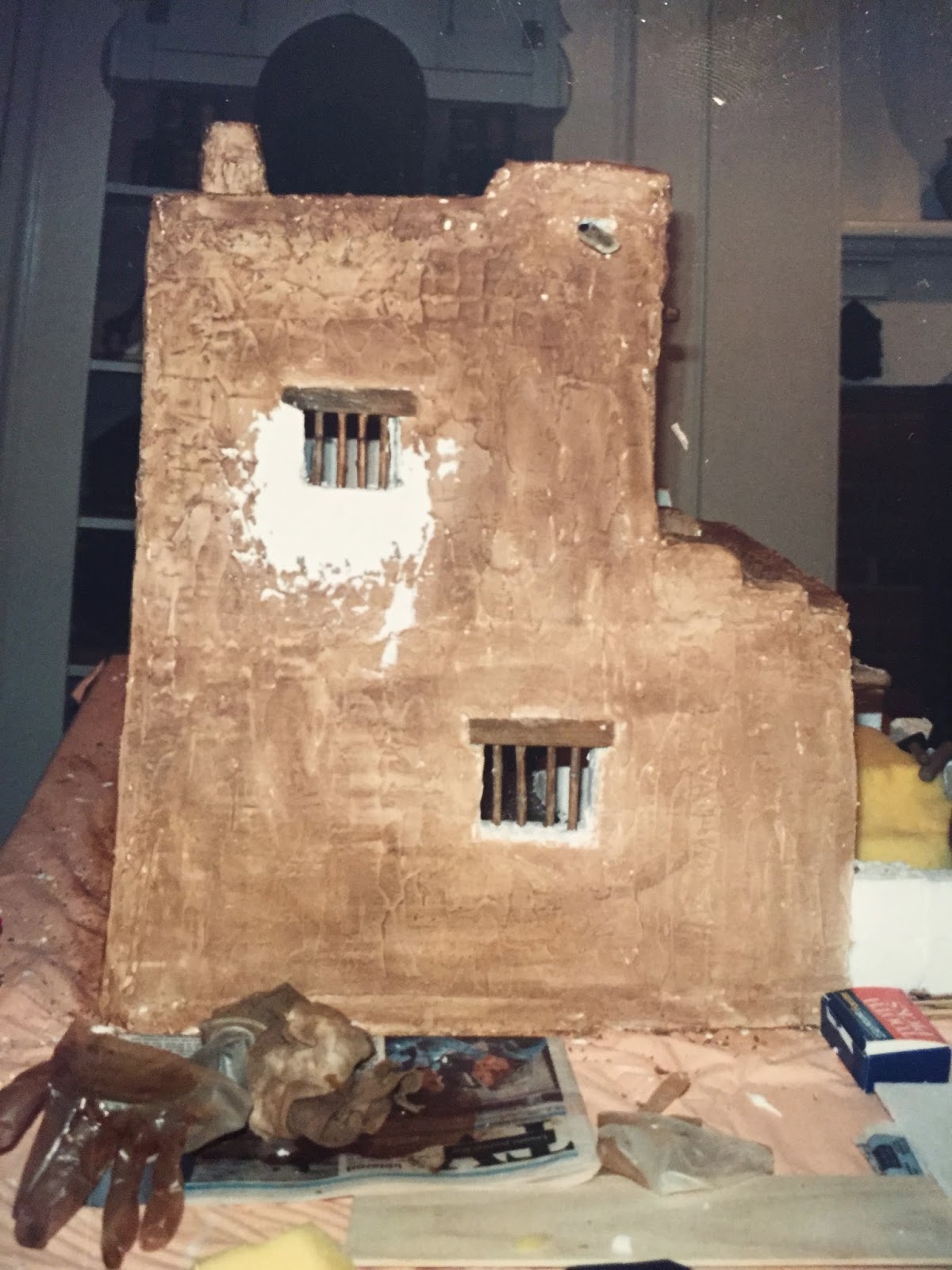 I stained the spackling compound after experimenting with various combinations of stain colors. This looks a bit blotchy, but when the staining was complete, I evened it out by using a thin overall wash.
Note the canale at the upper right corner. (You must look very closely; it hardly shows.) The close-up below shows the second canale at the opposite end of the house at the top of the outer kitchen wall. 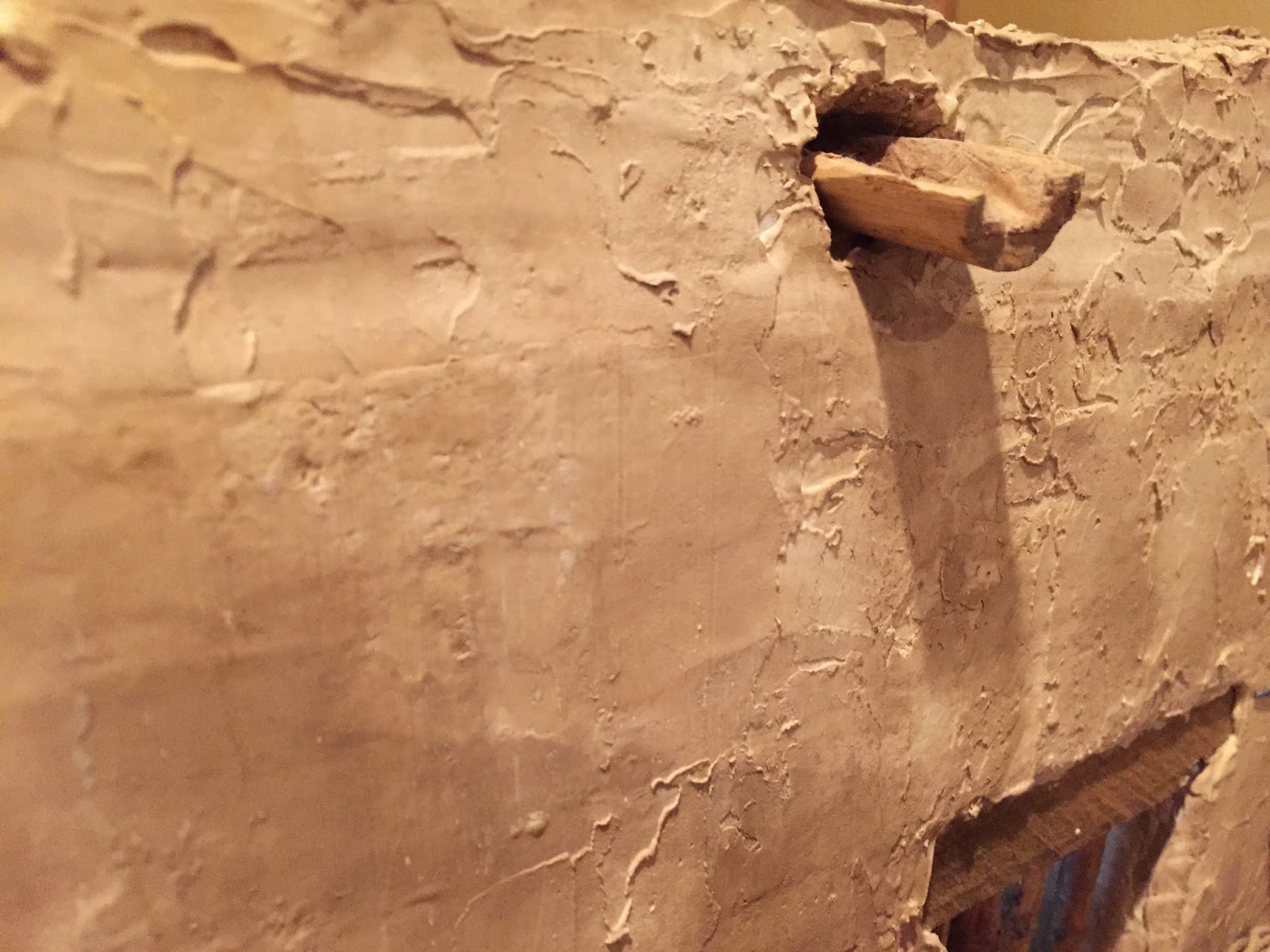 A canale is a trough, or canal, made in this case of wood, that serves as a drain spout to remove water from the flat adobe roof. Following is the true account of my acquisition of the canales:


A Tale of Two Canales

I had been on a quest for canales since I began to build the adobe house. I never seemed to come across any material that would work well; the canale had to be curved, and it had to be hollow. Among other experiments, I cut a wood dowel in half lengthwise and tried to hollow it out, but that proved both difficult and dangerous, since I repeatedly broke knife blades and suffered stab wounds. I was patient, though, and bided my time, knowing that I would eventually find just the thing.

My husband, Robert, and I walked the few blocks from our house to the nearby junior high school one evening to attend our daughter's parent-teacher conferences. As we walked up the concrete steps that led from the sidewalk to the school yard, I saw a fat stick lying on one of the steps. I took a second look and bent down to pick it up. I knew immediately that I had found a stick that would surely work for the canales. I was prepared to carry the stick, which measured approximately 6 inches long and was about an inch in diameter, into the school. Robert intervened. Adamantly.

"You are not taking that stick into that school!"

"You're trying to hide that stick?" Robert was incredulous.  And sarcastic. "Do you really think that there's even one other person in this entire town who might possibly, for any reason whatsoever, have any use for that stick?"

"I don't know. Someone might. It's a really good stick." So I hid the stick while Robert rolled his eyes and walked on.

The stick, miraculously, was still in the hiding place when we came out of the school. I carried it home triumphantly. The stick was exactly right for the two canales - weathered, bark already peeled off, firm on the outside but wonderfully pulpy and pliable inside and easily hollowed out. I carved out a small tunnel at either end of the adobe house and inserted the two canales. And they were perfect.

Thank you for reading these posts; I'd love to hear about the experiences you've had with miniature ownership or construction, and I'm always happy to hear your observations and opinions about my "offerings" on this blog - which is an exciting new endeavor for me.

I hope you'll check back soon for my next post, Adobe Dreams Part 3, in which I finish most of the construction and prepare for the fun of furnishing the house. So much work ahead - and so much play - using all my favorite materials: sticks and stones and styrofoam!