I lived in Albuquerque, New Mexico for five years, from 1970 until August of 1975, when I lost my mind and moved to a small town near Lincoln, Nebraska. (Oops - I meant to say that I lost my heart to a native Nebraskan and moved, etc.) All was better than well for a long while, until I began to think more and more of the adobe house that I had owned in Albuquerque. I missed those thick old adobe walls, the beamed ceilings, the corner fireplace, the chill of the tile floors, the little wall alcoves where I placed my favorite pieces of pottery. I wanted my adobe house back. On the other hand, I loved my old Nebraska farm house, with the big front porch, the hardwood floors, the leaded-paned windows, the front door with the beautiful oval glass inset, and the convenient tornado shelter. (Oops - I meant to say the basement-level fruit cellar.)

And so the faint glimmer of an idea for a miniature adobe house was born. I knew the final, finished form that my adobe house should have, but the creativity of my mind was no match for the clumsiness of my hands when I began to cut up pieces of wood and try to get them to stay together. The wood was too wobbly; the saw was too large; the nails were too long; the whole thing was too impossible. It was a great relief to just dry my tears and give up.

A number of years later, during one of our annual visits to Santa Fe and Albuquerque, trips that we took just to enjoy the northern New Mexico cuisine, I happened into a shop where there was a miniature adobe house for sale. It was made of wood, plastered over to resemble adobe; it had a price tag that was truly exorbitant, and it wasn't remotely like anything my mind had conjured up. It was just a wood house pretending to be adobe. I was discouraged beyond measure; if an obviously able carpenter had put together a wood structure that looked not at all the way an adobe house should look, then how would I ever, ever attain my dream of a miniature adobe house?

But then, sometime later, I was reading a copy of Miniatures Showcase - a magazine, needless to say, for those interested in miniatures. And there was an article with photographs depicting an adobe house that looked exactly like an adobe house. In miniature. Constructed not from wood, but from styrofoam. Styrofoam. The flash of a thousand sun-bright light bulbs exploded in my mind. Styrofoam! Yes! Of course, styrofoam. The stunning serendipity of that revelation still astounds me, the result of which follows in a four-part post. I hope you'll follow through to the end, which will, I promise, come much sooner than the three winters, beginning in January 1990, in which I labored happily to realize my adobe house dream. 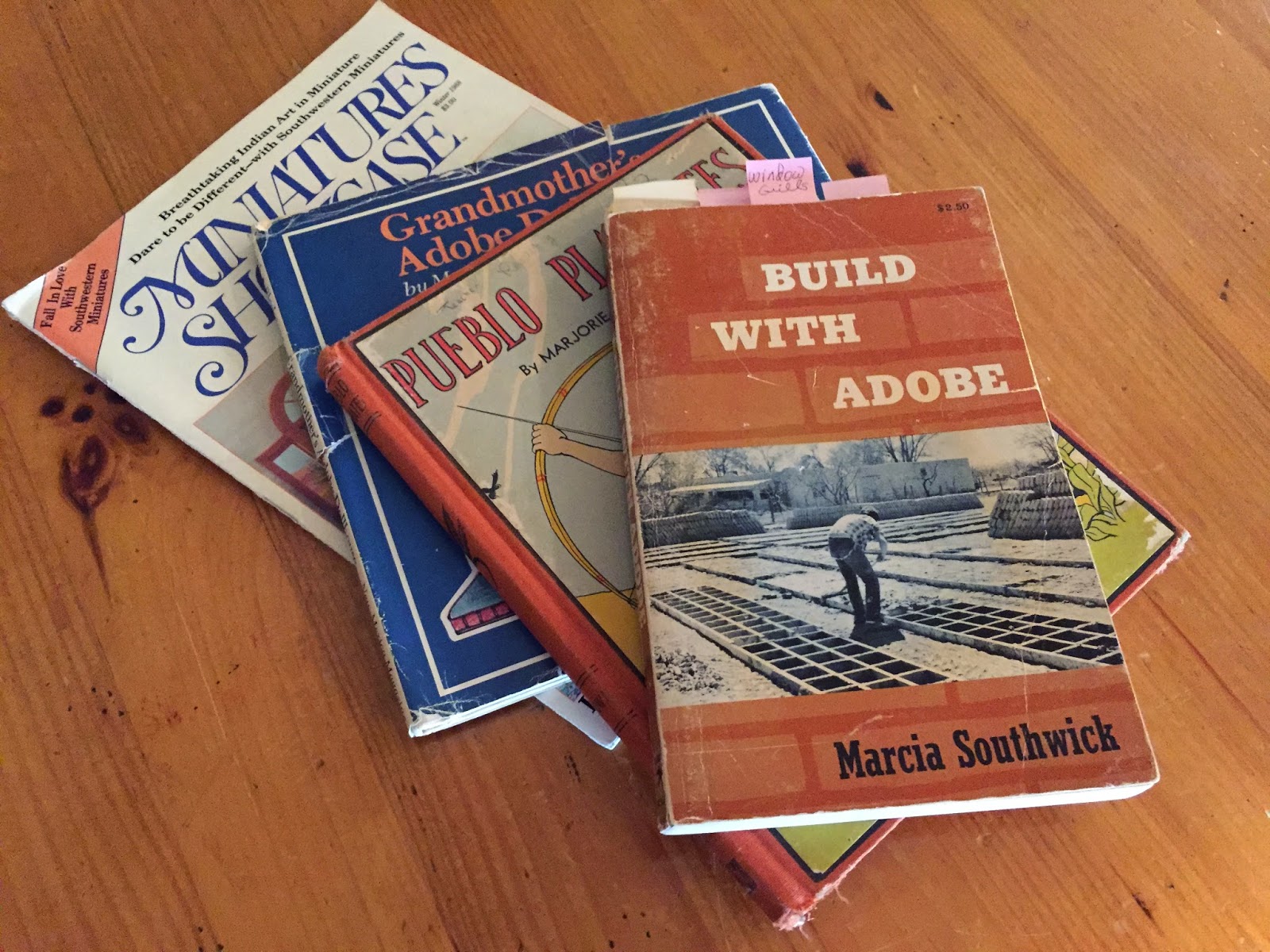 I decided on a mid-19th century vintage for my adobe house, and the books pictured above proved to be my favorites for researching the history and the construction techniques of adobe houses - aside from my personal experience of living in one. 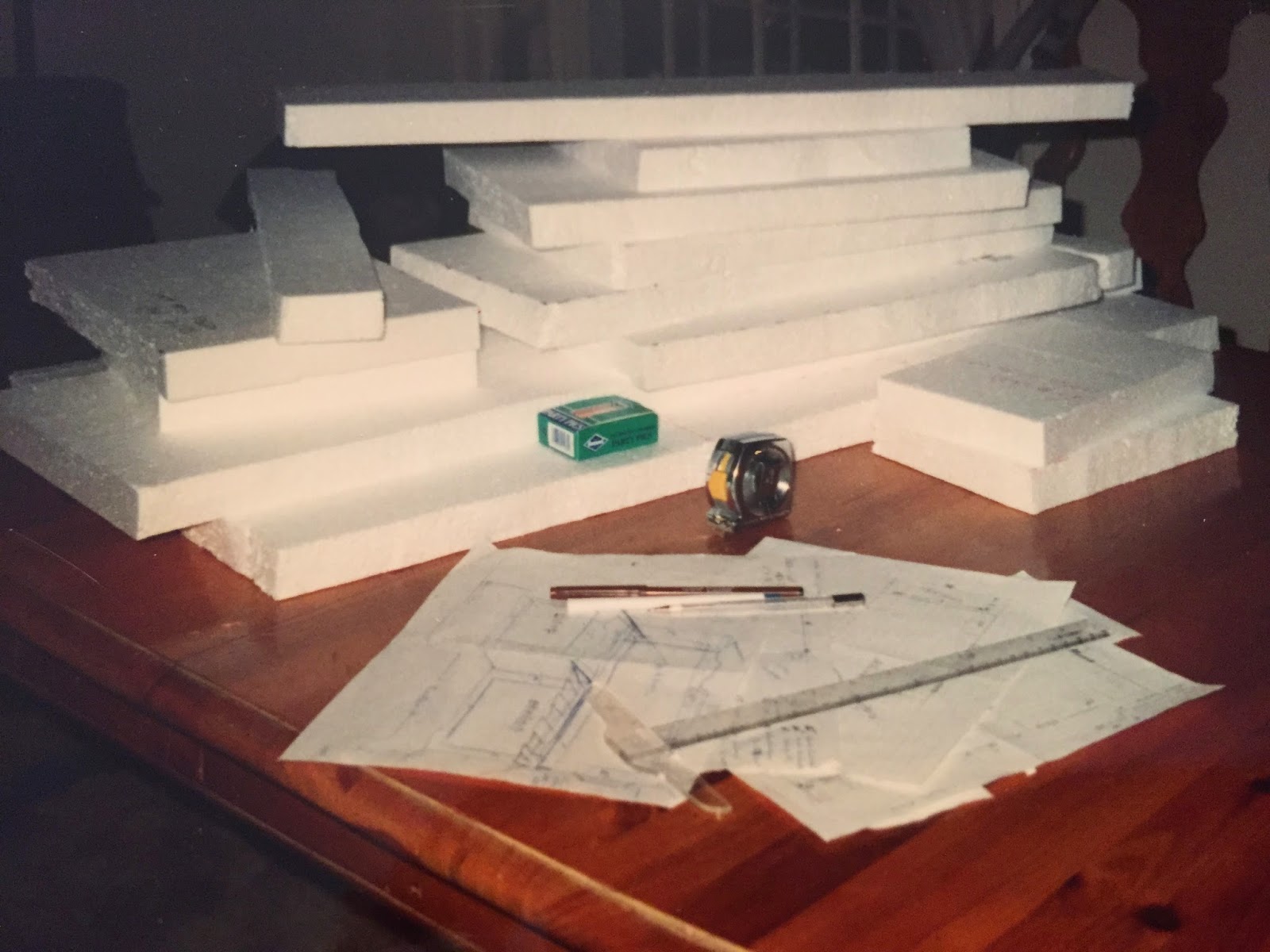 I started with a 4' by 8' sheet of 1 1/2" thick styrofoam and cut the pieces with a long, serrated bread knife. The very rough plans for the house were drawn out on graph paper with many mathematical corrections. I will try to remember not to reiterate my shortcomings in the world of numbers; suffice it to say that I struggle. So, converting a line the thickness of pencil lead to the reality of 1 1/2" of styrofoam thickness for each wall was a challenge that I did not always meet with success. 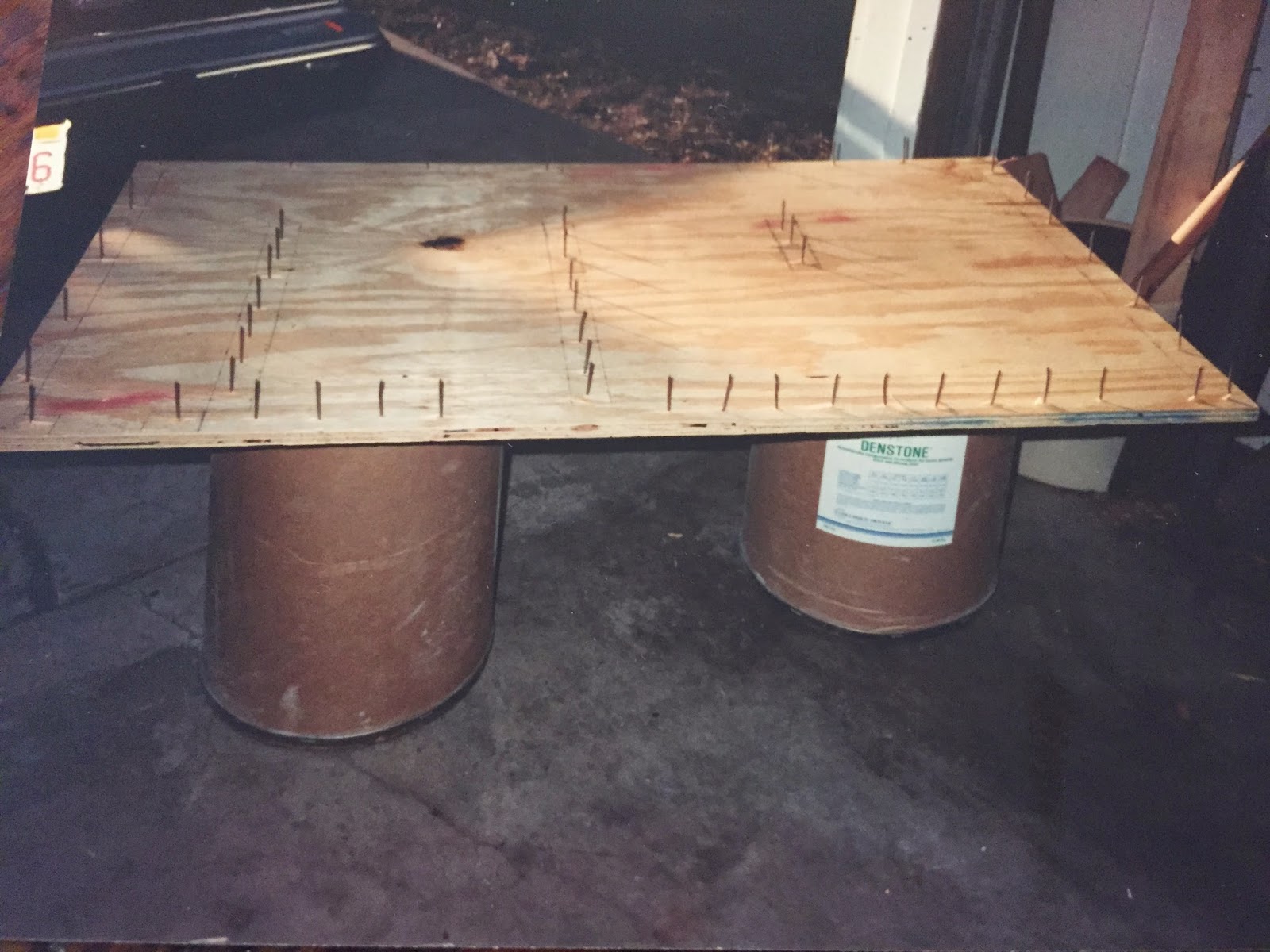 The plywood base for the adobe house measures 48" wide by 28" deep by 3/4" thick. I drew the basic floor plan for the lower level on the plywood and hammered in nails from the bottom so that the styrofoam wall pieces could be slipped onto the sharp points. I did take the precaution of applying glue liberally to the protruding nails to provide additional stability to the styrofoam pieces. 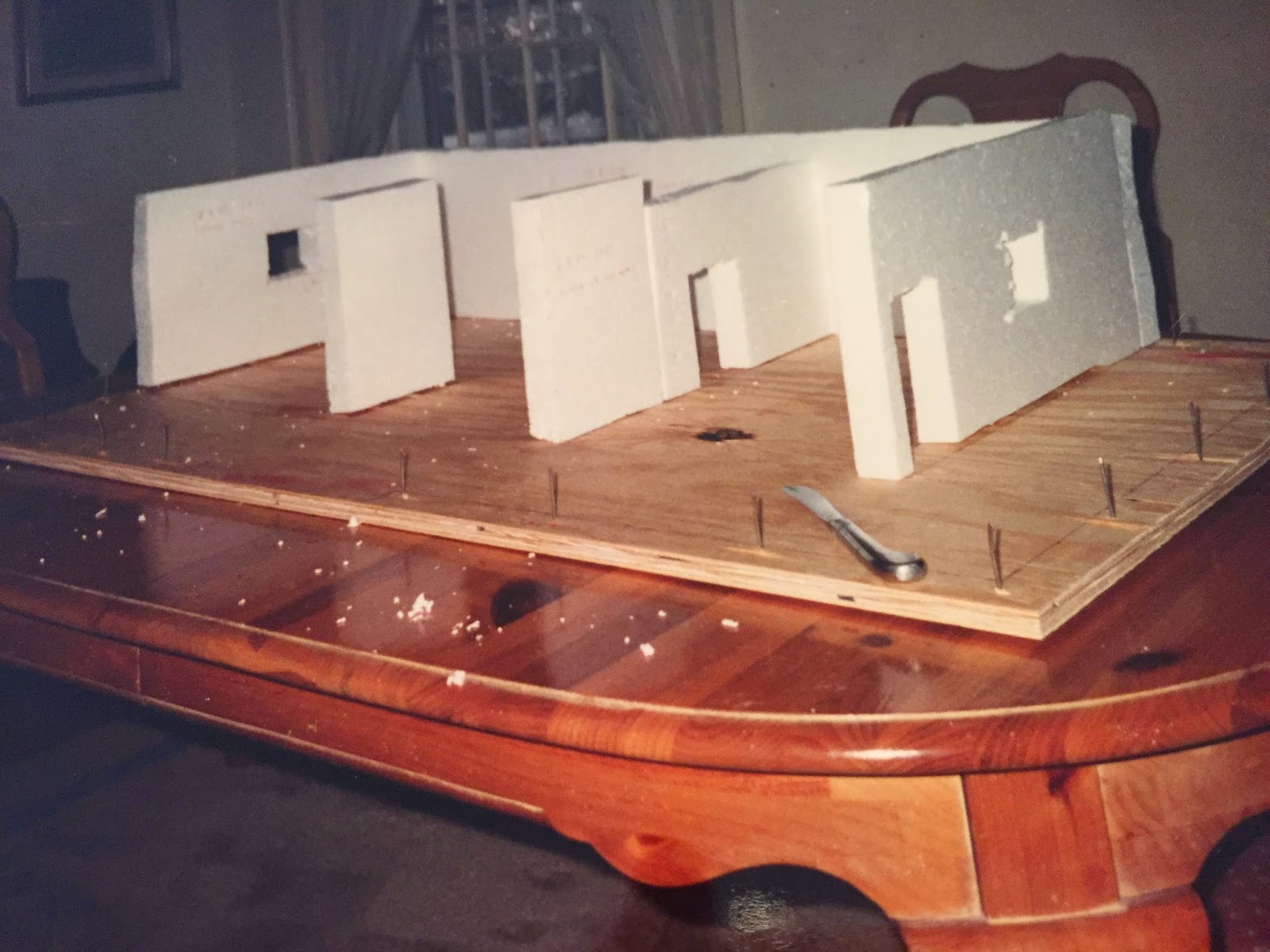 The cut pieces of styrofoam for the walls have been mounted on the plywood base. All the upright pieces are connected by toothpicks and glue. 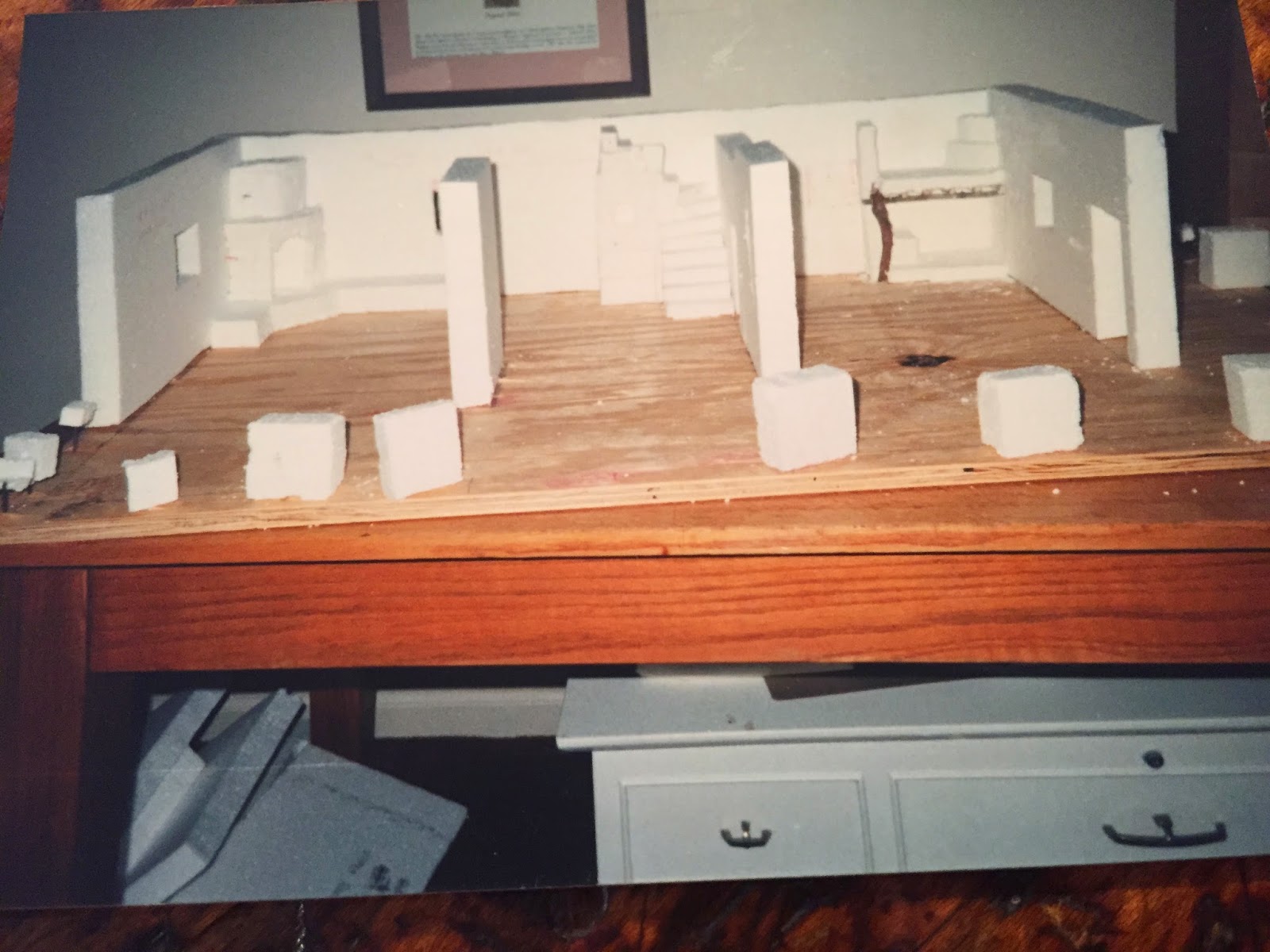 The kiva fireplace in the main room, left, has been built with a "banco" (bench) as an extension. I built a "shepherd's" fireplace in the kitchen on the right. The kitchen fireplace provided a shepherd with a warm bed on the shelf above the fire embers. The staircase that leads to the upper floor is completed. 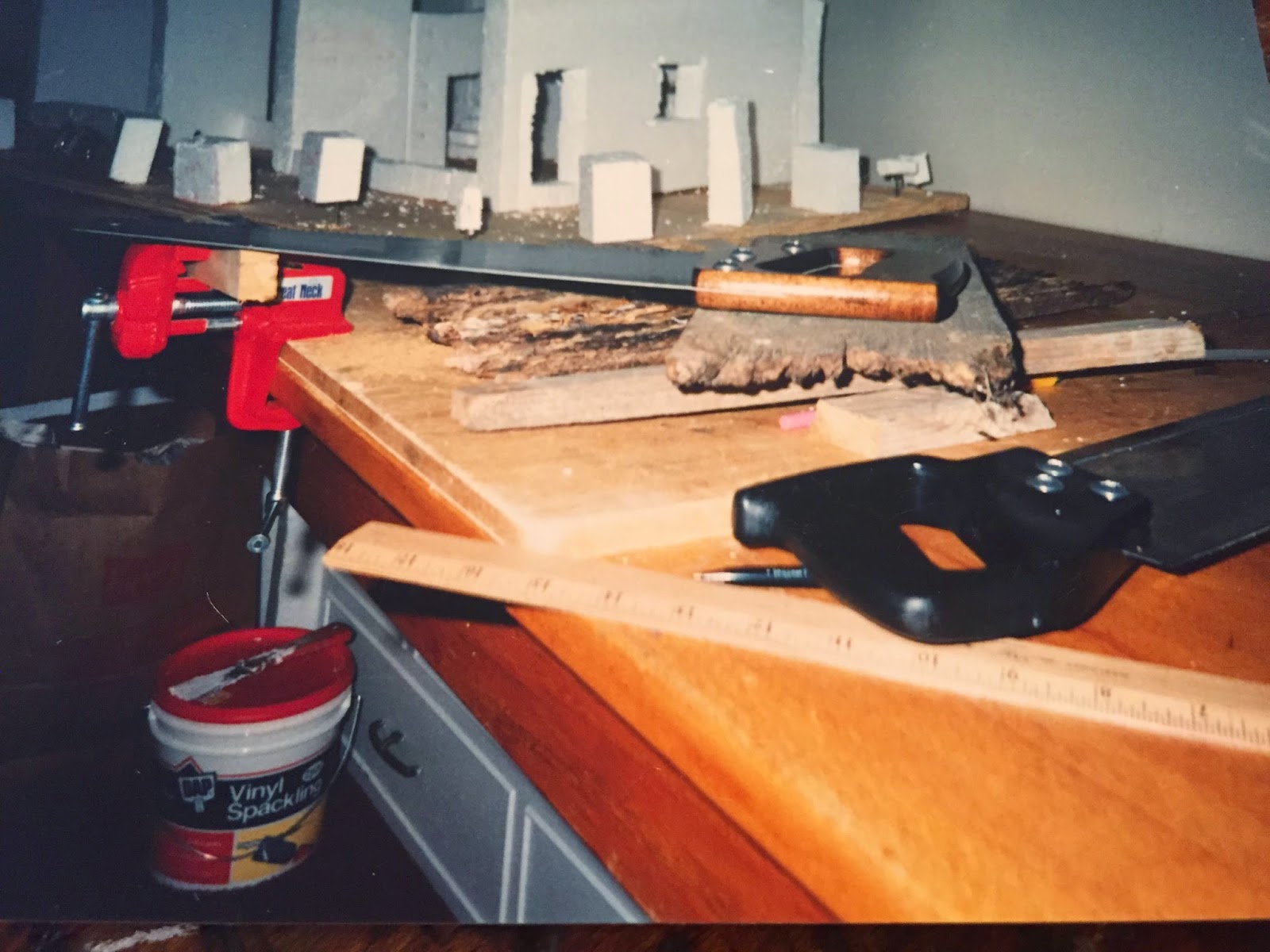 I found a big piece of old barn wood on a friend's acreage and used it to trim the doors and windows of the adobe house. After many scrapes, scratches, and punctures on my hands, I learned to place small chunks of styrofoam over the exposed nails on the base board for my protection. 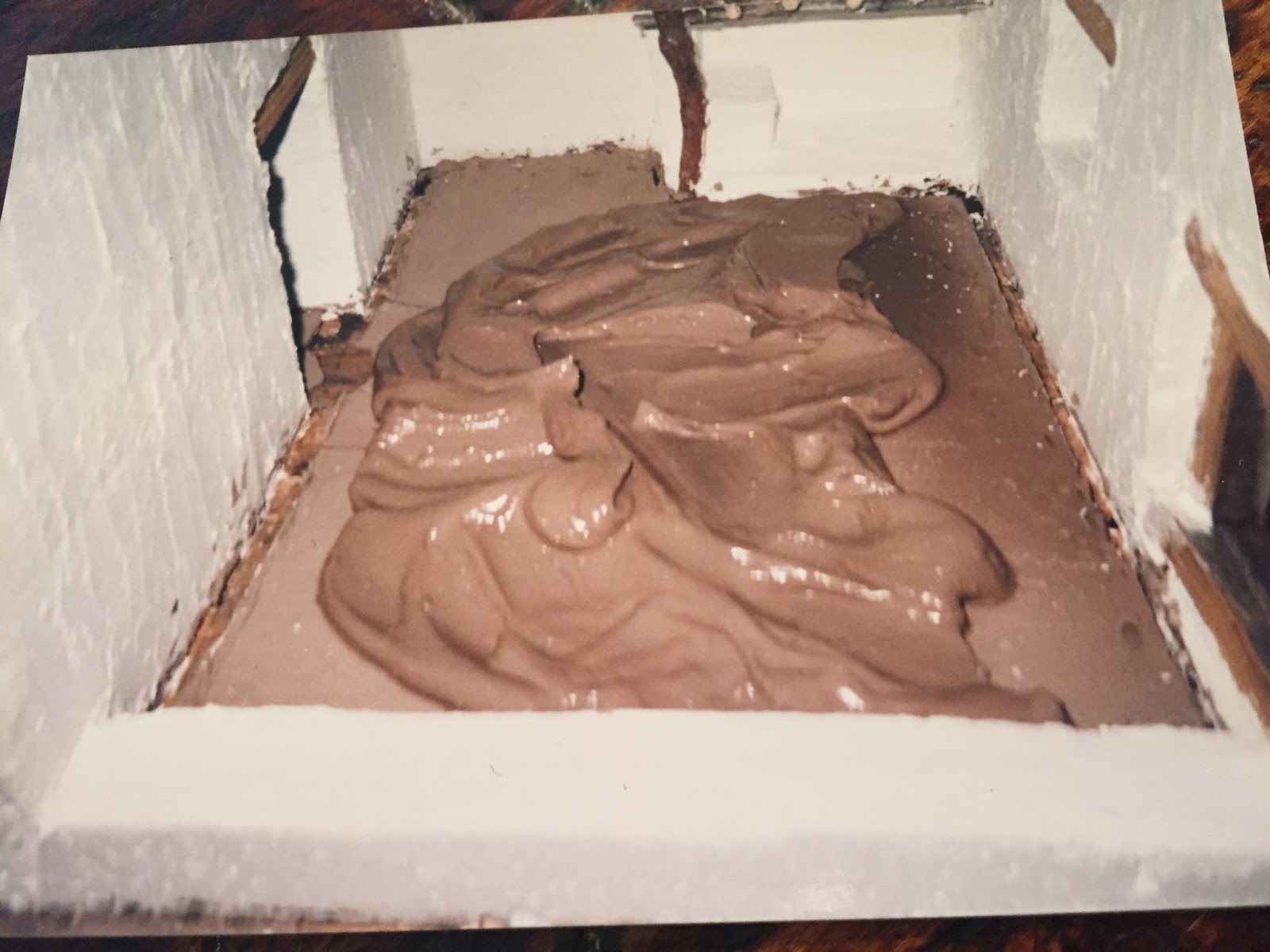 Pouring the mud for the adobe's earthen floor. Creating the floor was a nightmare of mishaps, mistakes, and miscalculations. I will share details of that unique experience in a later post. 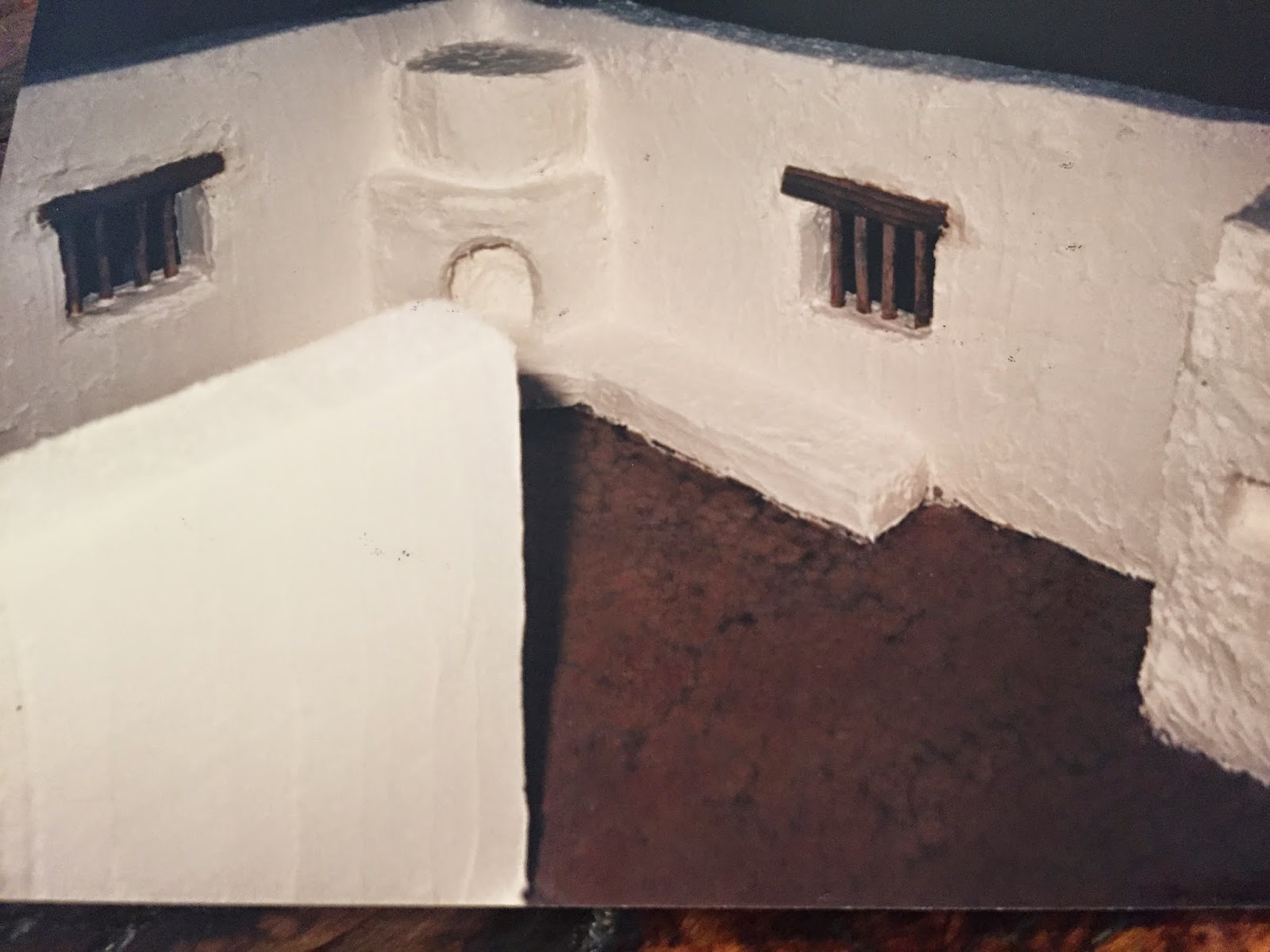 The earthen floor is finished at last. I contrived a mixture of fine wood ash and a reddish stain to simulate the blood and ash finish that was often used to seal and polish an earthen floor. The window trim is also finished. Because of the scarcity of glass or metal, windows were small and could be protected by wood grills made from thin poles. I collected the sticks used for my window grills from Wilderness Park in Lincoln. (Am I a bit late in hoping that was a legal act?) 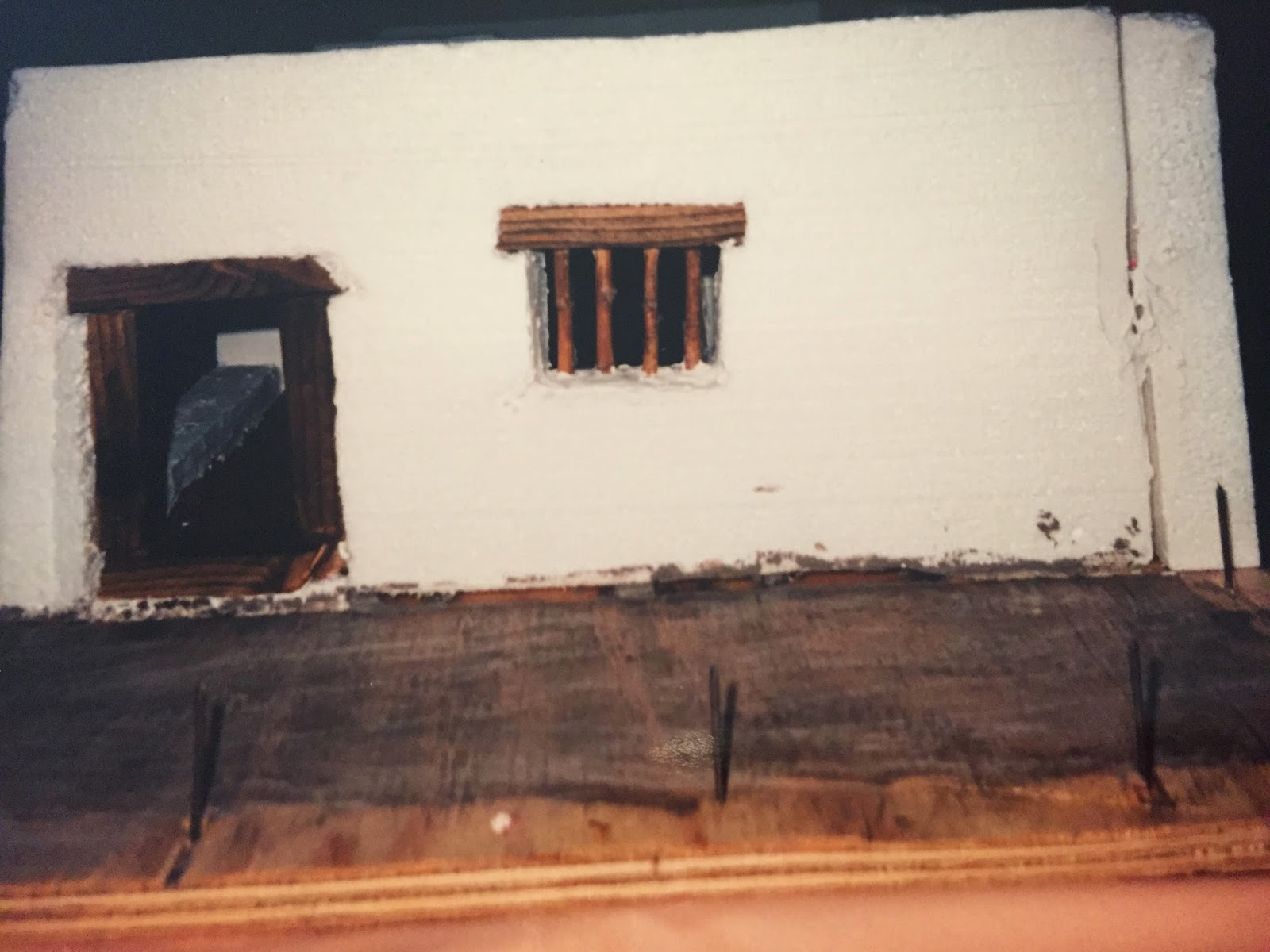 An exterior end view that shows the kitchen window and door and what will be the kitchen dooryard. The high doorsill was common in the early adobe houses. 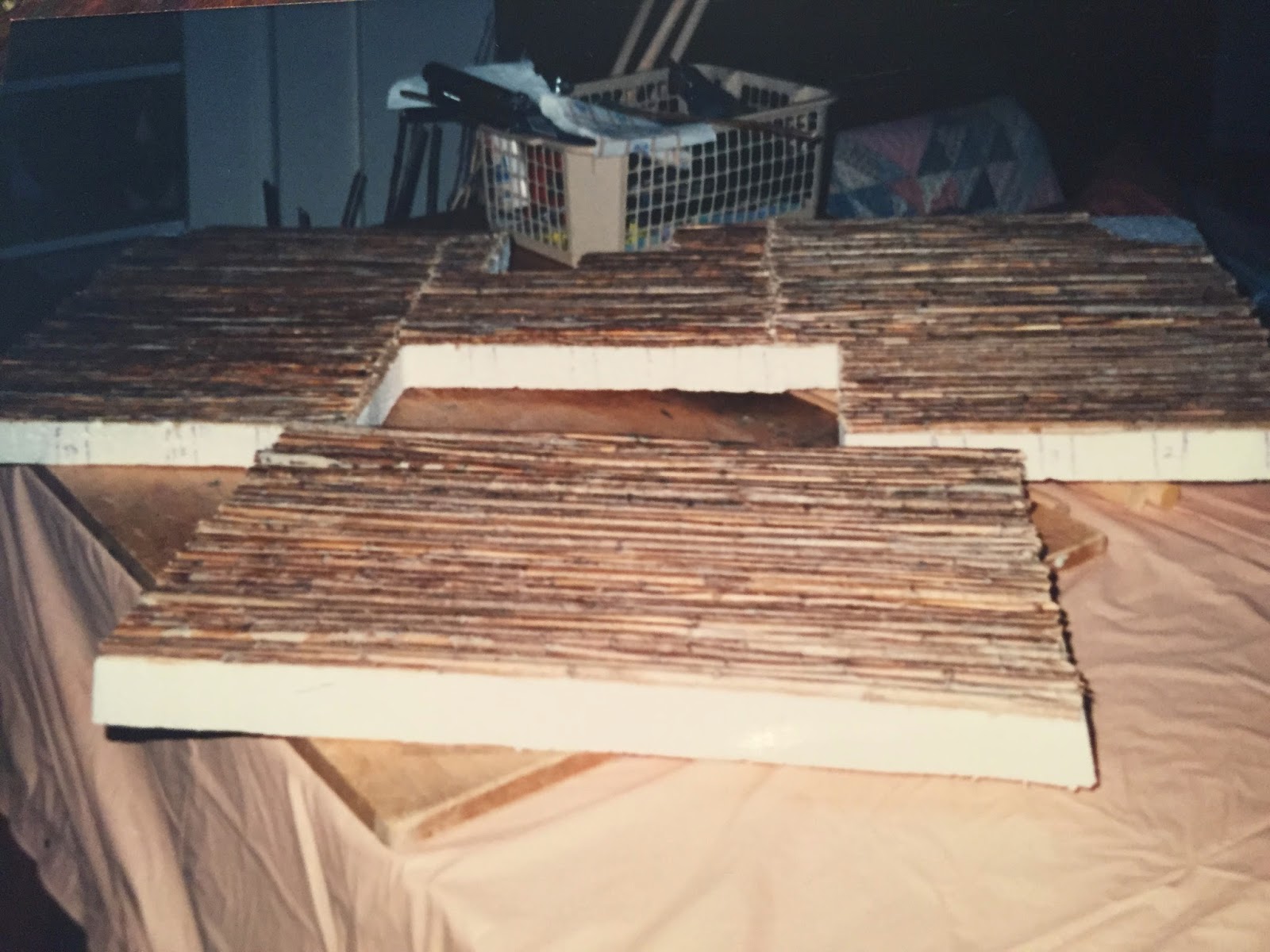 More sticks from Wilderness Park were used for the latillas on the ceiling pieces. (Yikes! I had forgotten that I actually picked up so many sticks from the park.) The latillas, usually sapling trees, are used on adobe ceilings to provide additional support to the vigas. 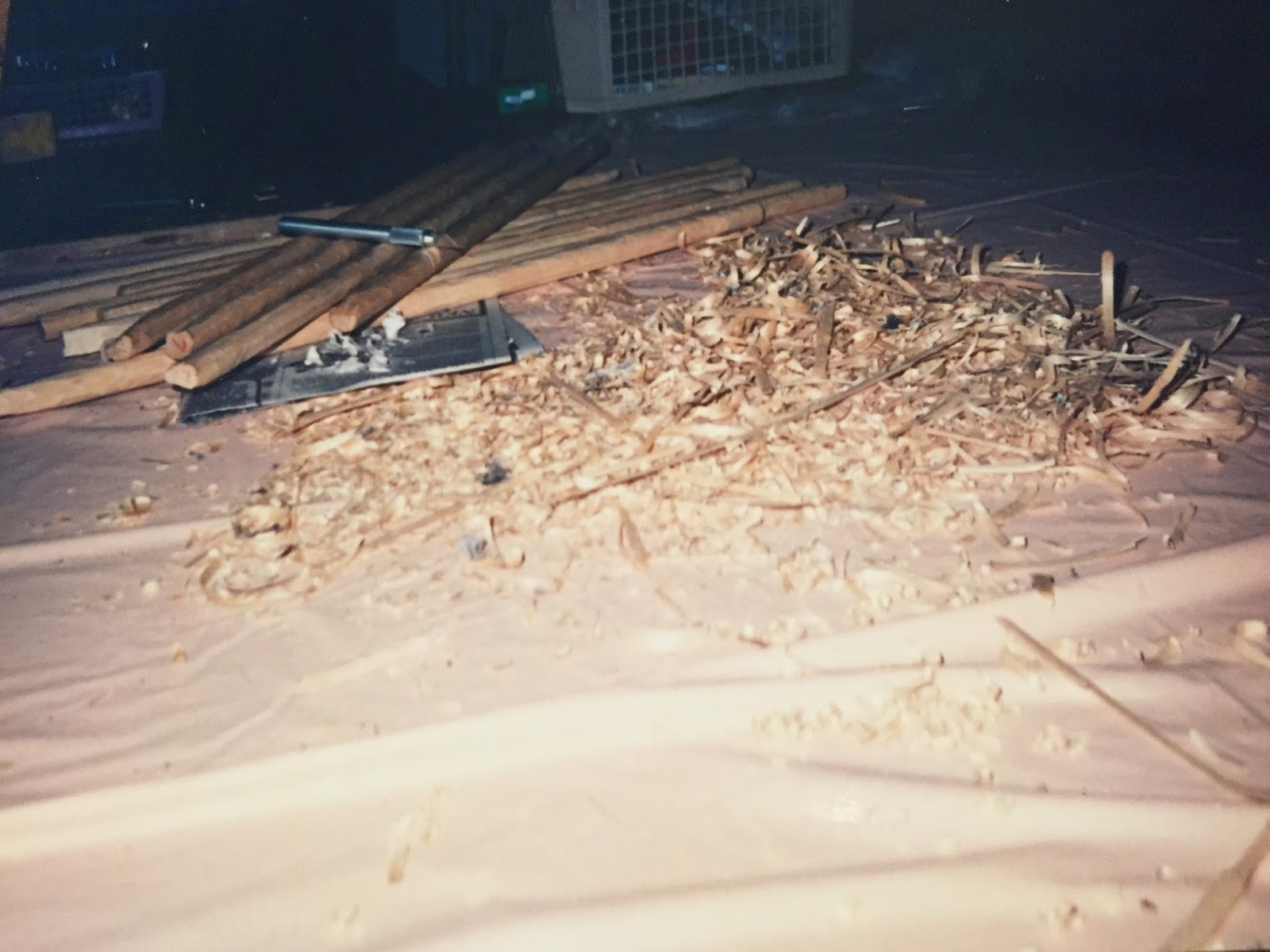 Making hand-hewn vigas, or wood beams, for the ceiling. I hesitated to bring more of Wilderness Park home with me, so I purchased (legally) wooden dowels from the hobby store to use for all my vigas. After hand-hewing the dowels, I stained and "aged" them by rubbing with dirt and ashes. 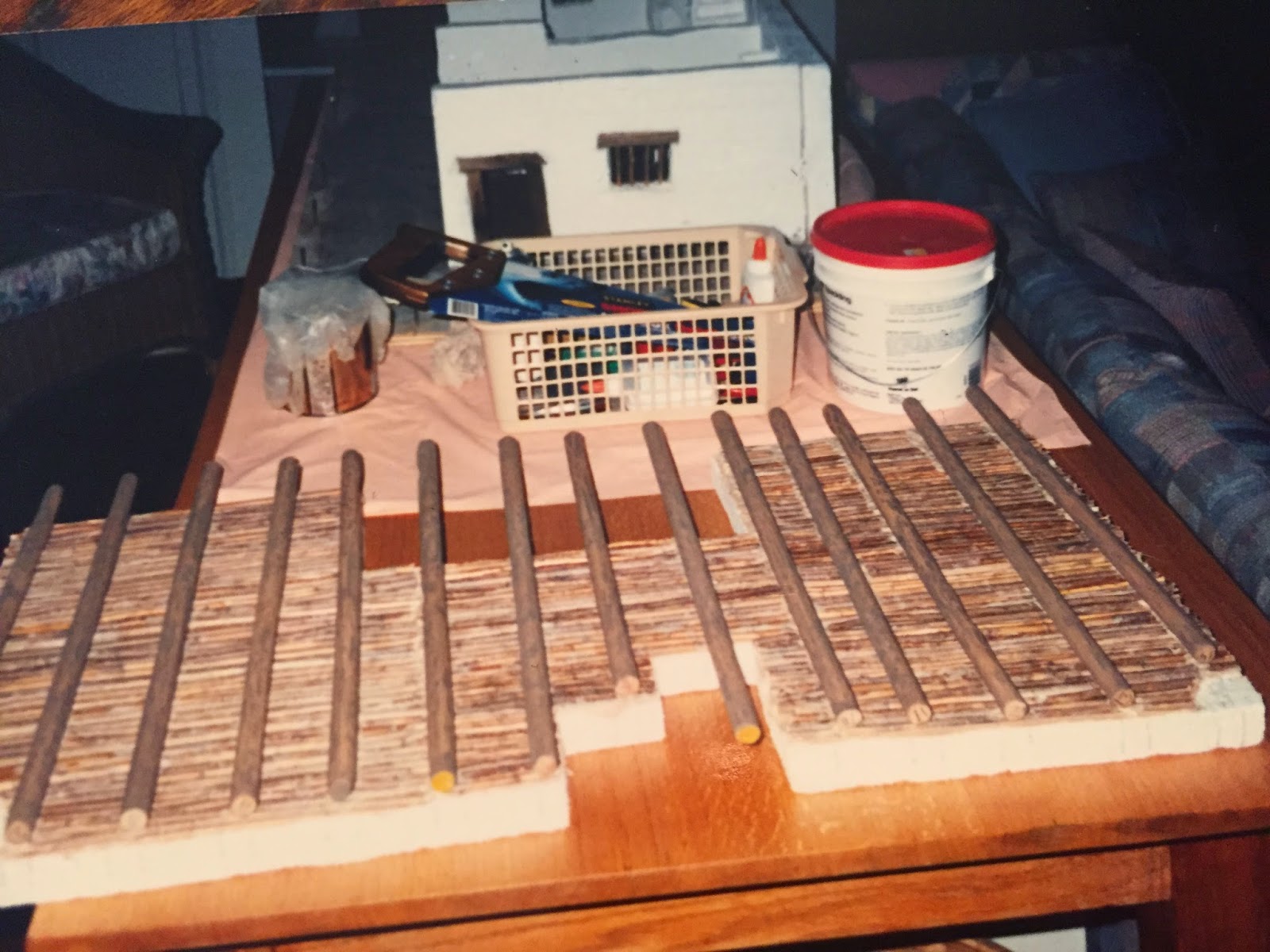 The vigas have been glued to the latillas on the ceiling piece. I used Liquid Nails to glue all the wood pieces onto the styrofoam. The ceiling is ready to mount. 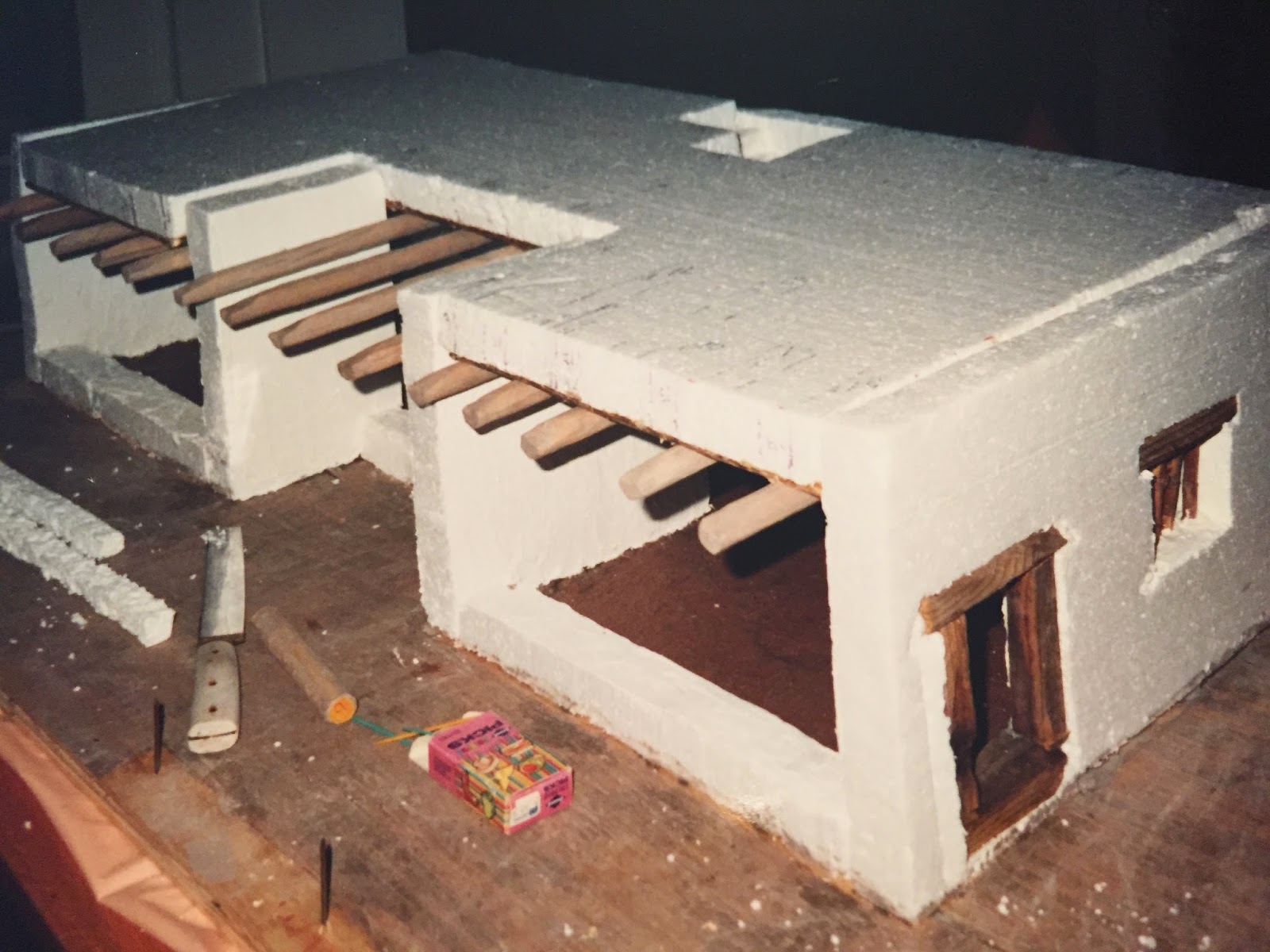 And…the ceiling is on! Note the stairwell opening at the back. The lower level staircase will open into this space, which will be the second floor bedroom. 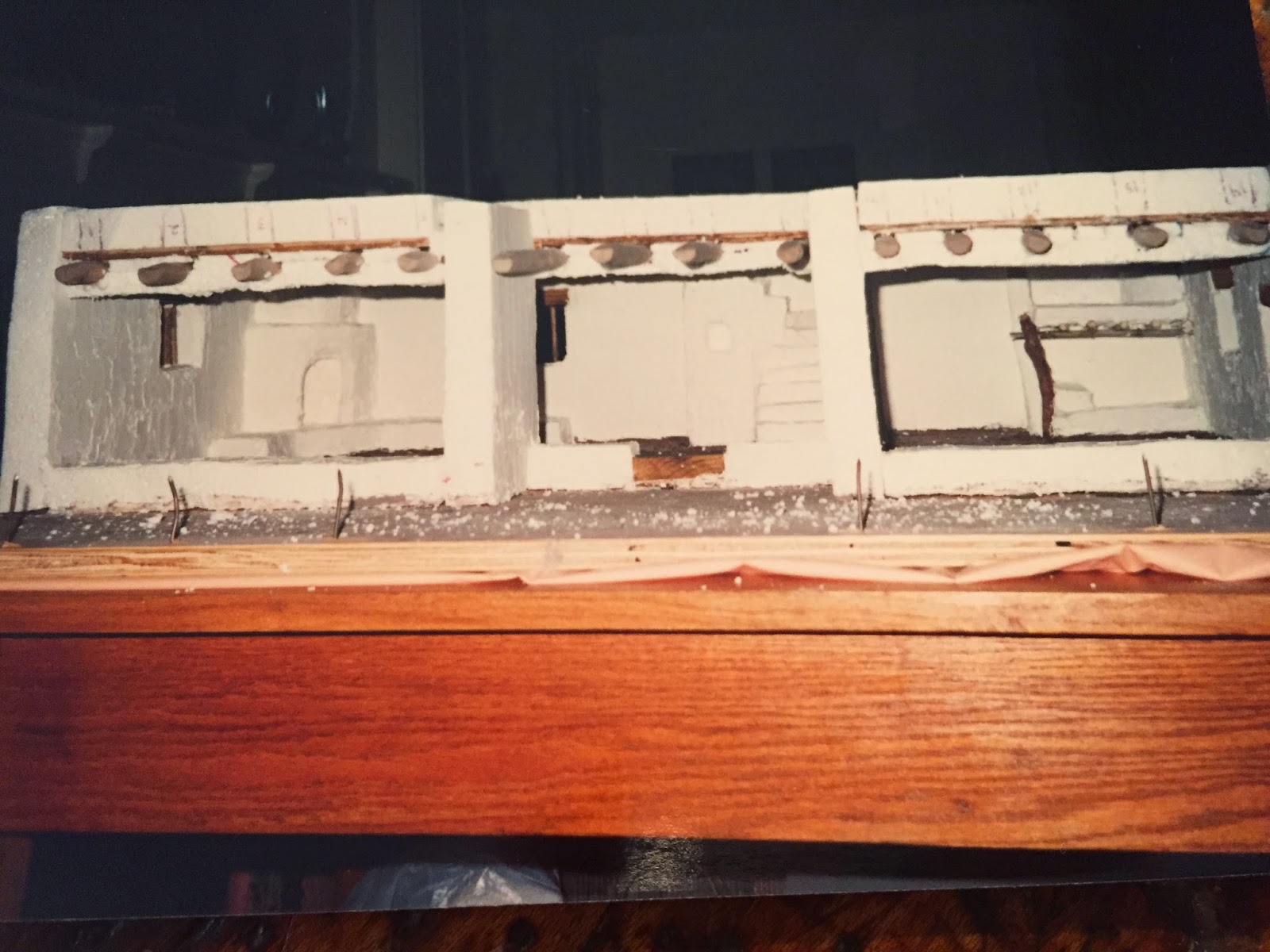 I have placed styrofoam underneath the vigas so that the ends of the beams appear to protrude through the adobe walls. (Just like in real life!)

Next up: Adobe Dreams Part 2 - The second-storey construction phase, which will include the addition of duct tape and plaster to the usual sticks and stones and styrofoam.