A Tale of Two Kitchens

Just when I was almost ready to install the villa's lower-level ceilings, I made a disturbing discovery. I realized that when the ceilings were in, blocking much of the access to the back walls, I would be unable to reach in far enough to arrange all the tiny accessories that I needed on shelves, cupboards, and on the walls. My two previous styrofoam houses measure several inches less in depth than the Villa del Vigneto, so furnishing and accessorizing those rooms after completing construction hadn't been an issue. This was a new problem, and the only solution was to delay the ceiling installation and move on with accessorizing and partially furnishing the rooms. 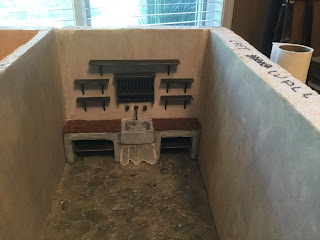 I decided to begin with the kitchen, since there were all those shelves waiting to be filled. Fortunately, I've been collecting kitchen things since before I began construction on the villa, so at least I was prepared for the premature "moving in." 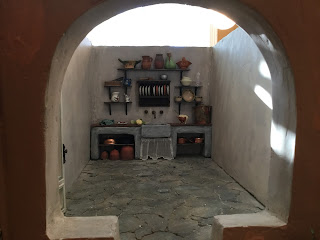 I had forgotten that I had SO MUCH STUFF packed away - all of it tiny, most of it slippery - and each piece required being secured in place with a dollop of sticky wax. That took much time and patience, and of course I loved every minute of it! 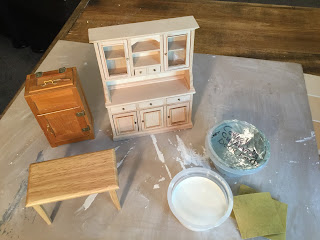 Well, I wasn't completely prepared to move in! I had all the pieces of kitchen furniture that I needed; but the hutch was unfinished, the table needed a different finish, and the icebox was damaged and needed new handles. I mended, refurbished, and refinished the pieces as necessary. 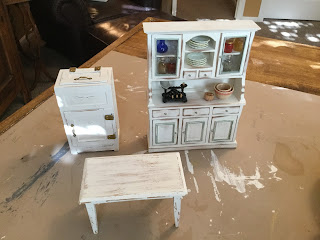 Here are the same furniture pieces after their make-over. 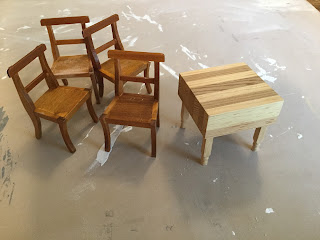 I found these very shiny chairs (the shine doesn't show so much in the photo) at an estate sale, but I can't remember where I bought the chopping block. 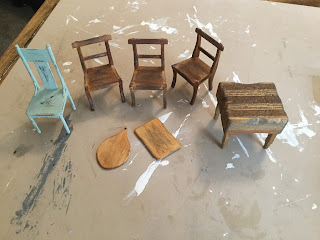 I aged the chairs and the chopping block along with an unmatched chair, a pie board, and a cutting board, but I forgot to take "before" photos of the last three items. 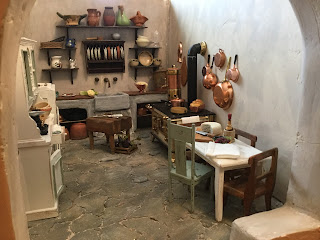 I first intended to only partially furnish the kitchen, but so many of the things would have been harder to secure (all the wall-hung pots, for instance) once the ceiling was in place. I finally decided just to do the whole thing and hope I don't make a mess of it when I install the ceiling. So I spent more time sticking down many more tiny things. (And I was still having a good time!) 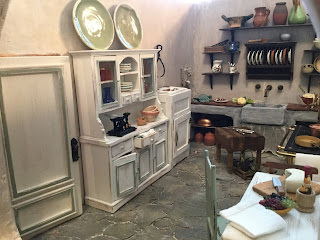 A view of the hutch wall. I found the green platters in September during the annual Nebraska "Junk Jaunt" - 300 miles and 3 days of garage sales, including vintage, primitive, and antique items. The platters are slightly larger than scale, but I couldn't resist them. 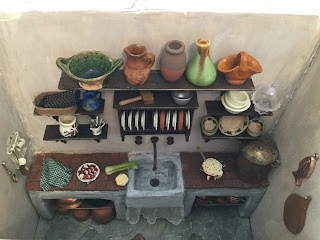 The sink wall and shelves from above. 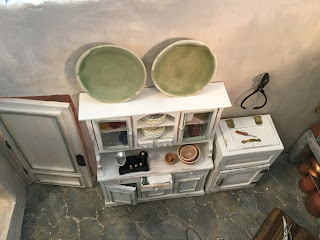 A top shot of the hutch and the icebox... 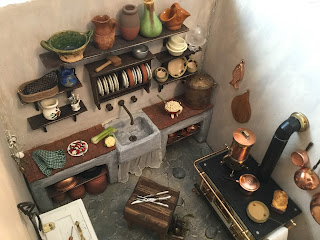 As you can see, the villa kitchen is very rustic and has not been modernized in keeping with the rest of the villa. Rudimentary plumbing has been installed, and electricity was recently added, but the old wood-burning stove and the outdated icebox have remained, at the insistence of Magda, the old cook who has been with the family for many years. Magda is an excellent cook, and if she chooses to nurse along the temperamental stove and deal with the regular deliveries of heavy blocks of ice, then so be it. Magda is a highly appreciated and valuable asset to the family; no one is willing to thwart her culinary preferences!

And so we will leave Magda to perform her wonders in the villa kitchen, while we move on to another time, another place, and another kitchen.

Some of you may recall that I spent some blogpost time bemoaning the inconvenience of our real-life kitchen renovation. It wasn't even much of a renovation; the original kitchen is only eleven years old, so it wasn't necessary to change any of the appliances or cupboards. But my husband, like Magda, is the family cook, and an excellent one. Like Magda, he is the ruler of the kitchen; and I am not willing to thwart his culinary preferences! 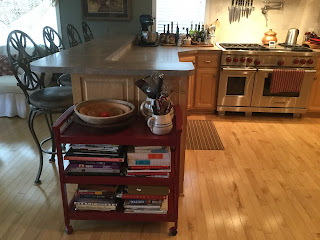 Robert's main preference was to have more preparation space. Our original countertops, shown above, consisted of a standard height counter abutted by a raised bar-height counter. Robert found that the raised portion prevented his "spreading out" as he worked. He also preferred to have more seating around the counter, since that's a gathering spot for friends and family while he cooks. 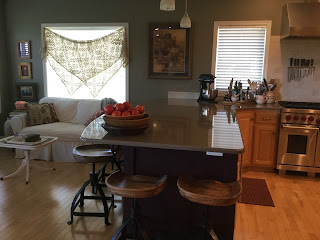 After the renovation, the new quartz countertop is not only flattened out but is slightly curved on the seating side, and is also 18" wider at the widest point. The end of the counter was also extended to allow room for two additional seats. Robert likes the backless stools as well; the space appears less busy. 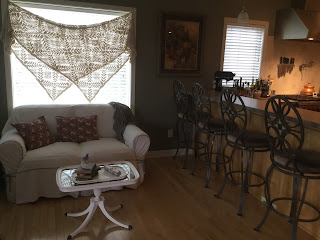 Another view of the four "old" bar stools. Our grandchildren (and sometimes adults, too!) were constantly banging the backs of the stools together as they swiveled. For my part, I was just thankful and relieved that there was still space to retain the loveseat in front of the window; that's my favorite corner to sit and sip wine when Robert is cooking. The space was intended for a "breakfast nook," but I prefer the loveseat to a table and chairs. 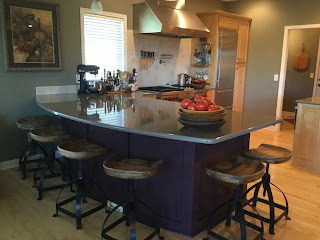 The six new stools swivel to adjustable heights, but they swivel so quietly! The color scheme for our very open floor plan in the kitchen, living room, and dining room is sage green (as you see on the walls,) deep red, and eggplant. We used an eggplant color to paint the new cabinet base. 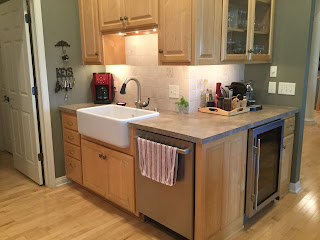 This is my "other" corner. Since I'm the clean-up lady, I admit that I spend as much time here as on my comfy loveseat. Robert is usually, but not always, a tidy cook. Sometimes it's a challenge to keep up with him. The above photo shows the old countertop. 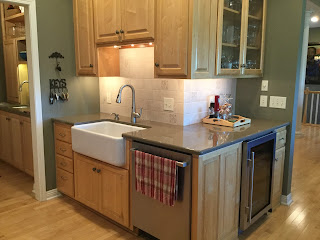 This new view hasn't changed much; the sink is now under the countertop, which does make clean-up easier. The new faucet is taller than the old one, and the counter is now less cluttered and provides more working space. We moved all the coffee apparatus into the adjoining pantry, which now holds our coffee bar. 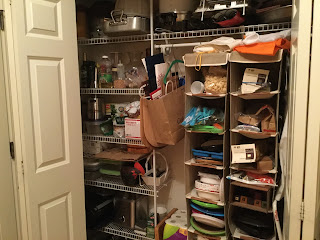 Here is the old pantry - actually a mud-room sort of coat closet that I could sometimes keep organized. I sometimes lost control. 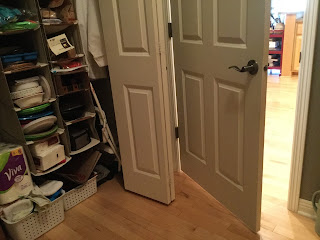 The folding doors on the closet were always at loggerheads with the door into the kitchen. 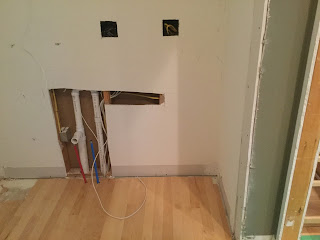 The entire closet was torn out and the kitchen door removed. The above photo shows the new plumbing for the bar sink. Electrical outlets have been installed for the coffee makers. 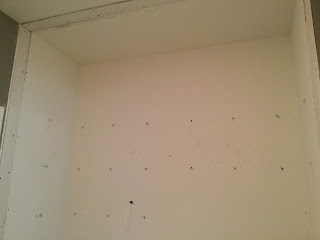 All the old wire shelving was removed from the upper portion of the closet as well. 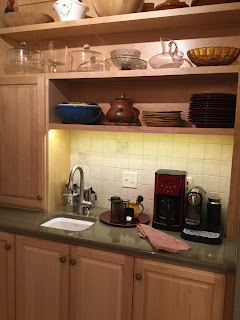 And at last we have a new coffee bar, which saves much space on the kitchen counters. There is also ample space to store many of our large pieces within easy reach and in plain view. No more searching, rummaging, and shifting objects around to reach what we need! The tile backsplash was made from tiles that were left over from the original construction in 2005. We knew the number of tiles required would be very close to the number available - but when the backsplash was completed, there were TWO tiles left over! Too close for comfort! 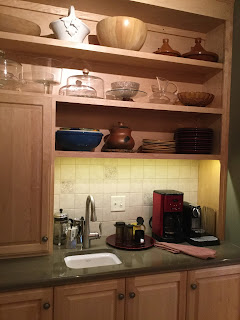 Whew! What a lot of work to create/renew two kitchens at the same time! There's a surprising amount of effort involved in planning, organizing, watching, and waiting for first one thing and then another, whether the kitchen is life-size or miniscule. But the important thing is that all the effort was definitely worthwhile: both Magda and Robert are happy in their respective kitchens, and their culinary creativity is unthwarted. So I'm issuing a standing invitation for you to come visit either kitchen, whatever its size, and whatever its place in time or space. I promise you a memorable meal!