Construction on the Villa del Vigneto is moving along, but it's moving along slowly - thus another short post. But I did accomplish a few things. I've moved from the kitchen into the dining room, where the "unreachable" back wall presents the same problem that I had in the kitchen. Furnishing that back wall before the ceiling goes on has been my focus. 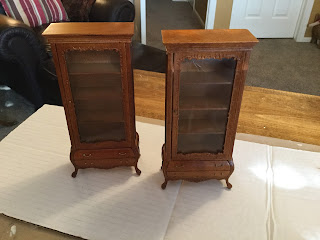 These glass-fronted cabinets have been packed away for a long time, but they still look very new.  Too new. They need to grow much older in a short time. 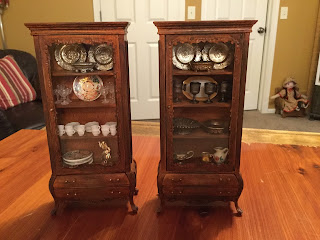 I aged the cabinets with fine sandpaper and dark stain in select spots. I didn't want them to look shabby - just well used. Then I had fun filling the shelves with an assorted collection of objects. 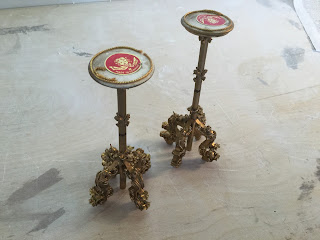 These ornate pedestals were in a box of things that I found at an estate sale; I'm not sure of their original purpose. They may have been intended for use as plant stands. 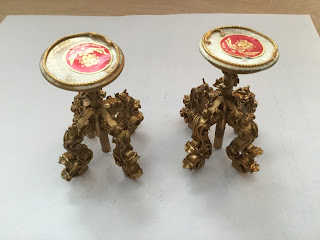 However, I had a different purpose in mind, but I needed to shorten them and cut out the center dowels. The pedestals will show up a little later in their repurposed form. 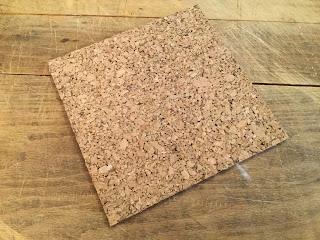 This is a 6" square of loosely-pressed cork. I was searching for something that I could use to contrive a marble tabletop; this seemed to have potential. 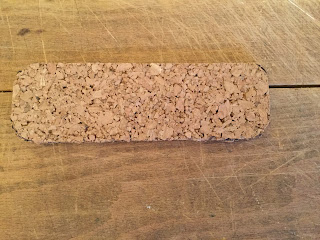 I cut the cork into a rectangular shape, then rounded off the corners. 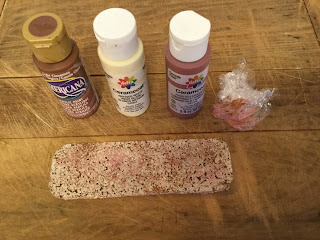 I painted on an overall base coat of Antique White and pounced on Frosted Cranapple and Light Cinnamon. (That sounds very autumny and good to eat!) 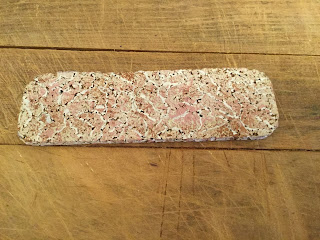 I used plain white paint for the veining, following some of the natural lines in the cork. 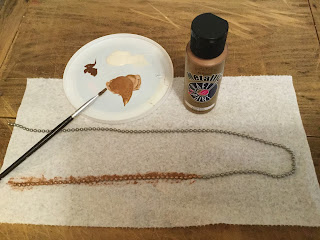 The top seemed a bit plain, so I found a beaded chain and painted on a thick coat of bronze. 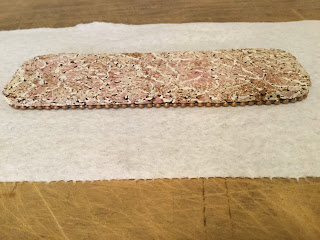 After I glued the beading around the edges of the tabletop, I sprayed the whole thing with several coats of polyurethane. 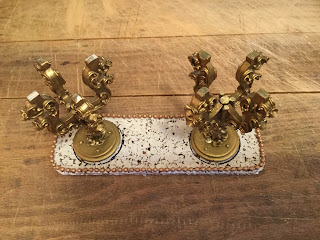 The final step was to glue the tabletop to the pedestals, which have become (voila!) the new table base. I did, of course, forget to take a picture of the right-side-up version. 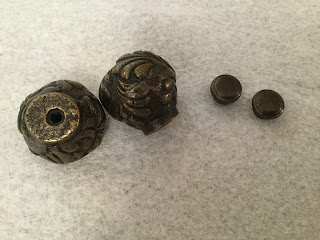 For a long time, I had been looking for two urns to place on the tops of the two dining room cabinets. I hadn't come across just the right thing, but I wasn't concerned; after all, there was lots of time before I would be ready to furnish the dining room. Then suddenly, there wasn't any time left - I needed those urns now! That unreachable back wall had to be finished. So off I went to Hobby Lobby, where I found two drawer pulls that might possibly resemble pottery or porcelain and were the right size and shape. I bought them and came home to look around for something that would serve as the lids, since I had my heart set on lidded urns. And amazingly, I remembered that I had seen two things a week or so before that I couldn't identify, and when I asked Robert what they were, he said they had been left behind by one of the men working on our new kitchen. He didn't know what they were for. I saved them in a plastic bag. 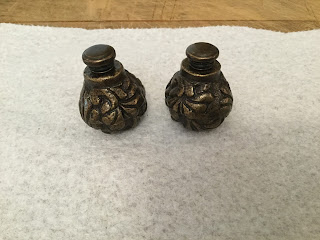 So the two mystery things have become (voila!) the lids for the urns. 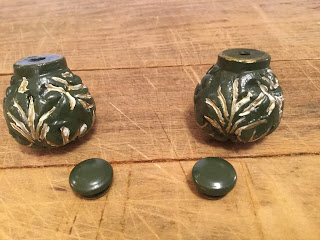 I painted the urns and lids a deep green and added gold and white to highlight the pattern... 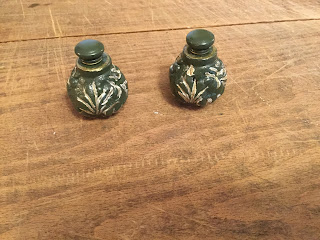 ...and the lidded urns are ready for the dining room cabinets. 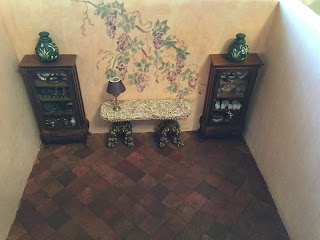 After I added a lamp to the table, the back wall was finished! (Except for One Other Thing that I need for the table, but I have a little more time to find that Thing.) 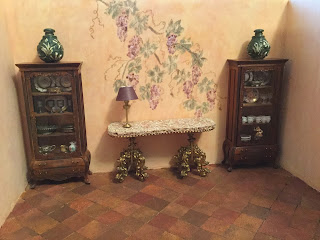 Another view of the dining room back wall. 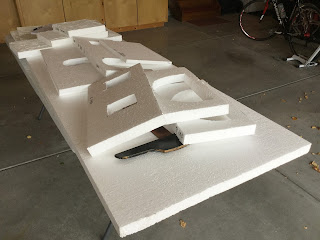 I did find some time to continue cutting the walls (and doors, windows, and arched openings) for the villa's upper level. I feel as though I'm in a race against the onset of cold weather. I do NOT want to work in the garage in the cold! But I still have all the stuccoing to do, which requires much drying time. And of course MUCH SANDING! Will the mild weather hold? Will I be out there turning blue and numb with cold? Will I shelve the whole villa project until next spring? Stay tuned. 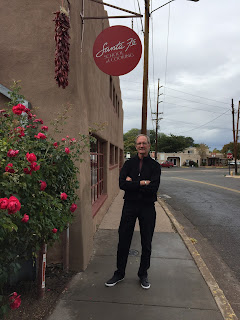 One of the things that delayed progress on the villa this month was a trip to Santa Fe, New Mexico, where Robert was enrolled in a three-day cooking class. He is now well versed in the art of cooking red chiles, green chiles, corn tortillas, and chile rellenos. YUM! 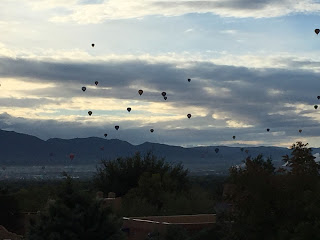 Our visit happened to coincide with Albuquerque's annual Hot Air Balloon Festival, so we enjoyed the sight of hundreds of balloons floating high over the Rio Grande Valley, watched over by the Sandia Mountains to the east of Albuquerque. 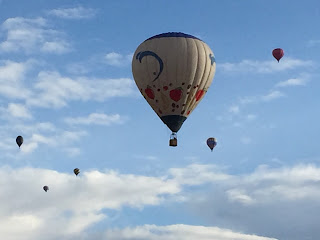 The blue, blue sky made a perfect backdrop for the colorful balloons 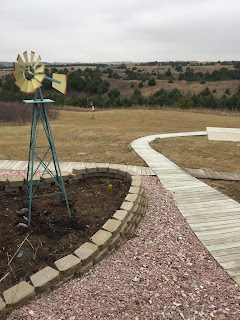 We brought back a souvenir - also colorful. We found this windmill at an Albuquerque antique shop. It's now anchored firmly in Robert's small garden at our Sandhills home.  We're hopeful that the rapid whirling motion of the blades will help deter all the critters who want first dibs on our garden vegetables. (I know, I know; wishful thinking!) But it's a fun thing to have, anyway.


I hope you all have a Happy November.