I was so excited when it was time to put in the floor of my adobe house. I had done quite a bit of research on the early New Mexican adobes and decided that I definitely wanted mine to have an earthen floor. The method sounded simple enough. I was using information that was meant for someone building a full-sized house, which meant that the floor for a miniature house would be even simpler. Wouldn't it?

The basic instructions started with the obvious thing: Any soil that can be used for making adobe bricks can be used for the earthen floor. Easy as mud pie. I had a good-sized vegetable garden in my back yard, and since it was winter, the garden was barren of plants; all that dirt was mine to take. So I carried out a trowel and a bucket and took some. It wasn't New Mexico dirt, but Nebraska dirt was good rich dirt. And after all, I assured myself, dirt is dirt is dirt. 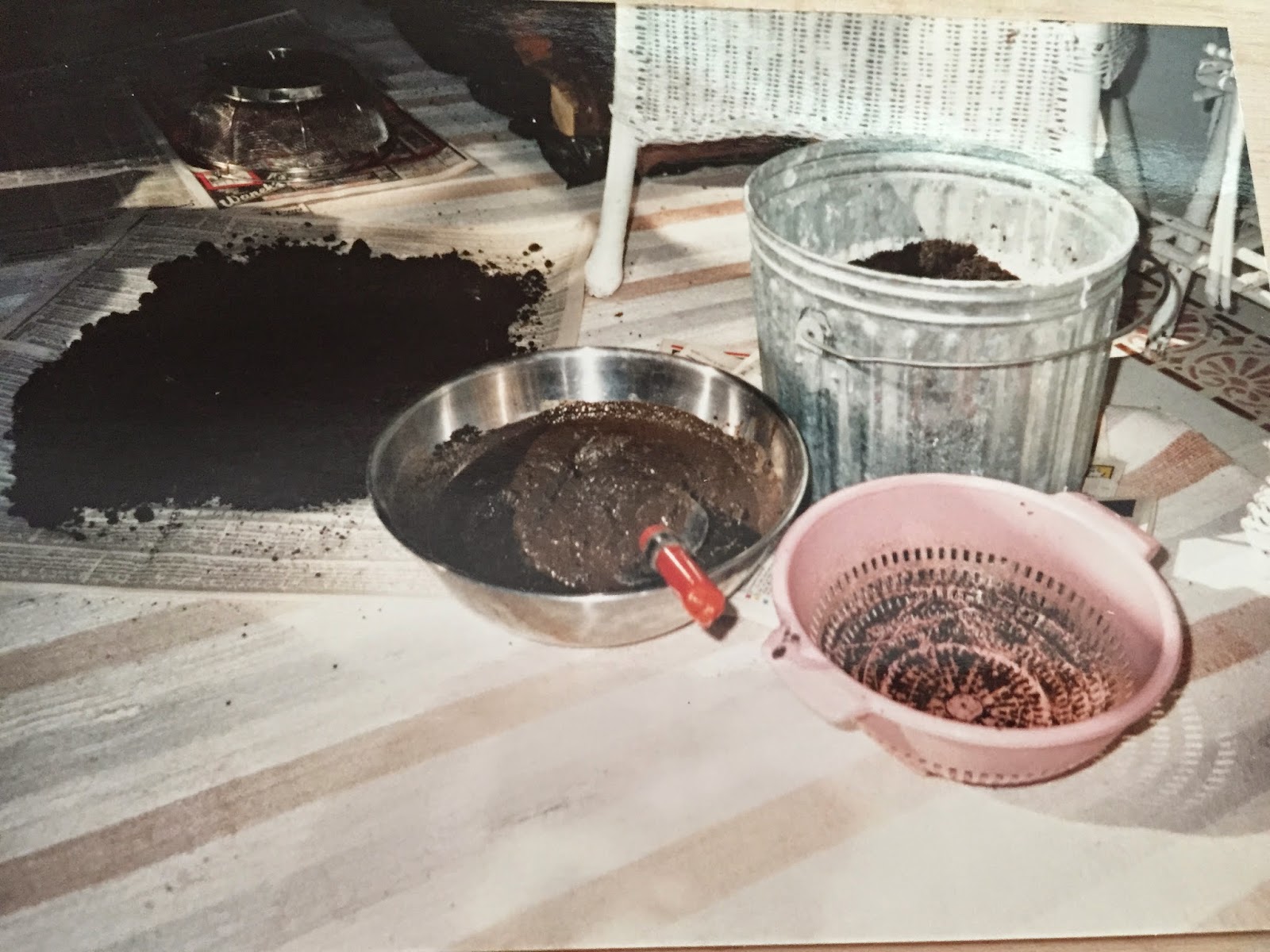 The next step was to sift out lumps and rocks from the soil. Done. Then mix the soil with water to the consistency of fudge. I had to estimate that with a rough guess. I can't remember ever making fudge; I just eat the finished product. 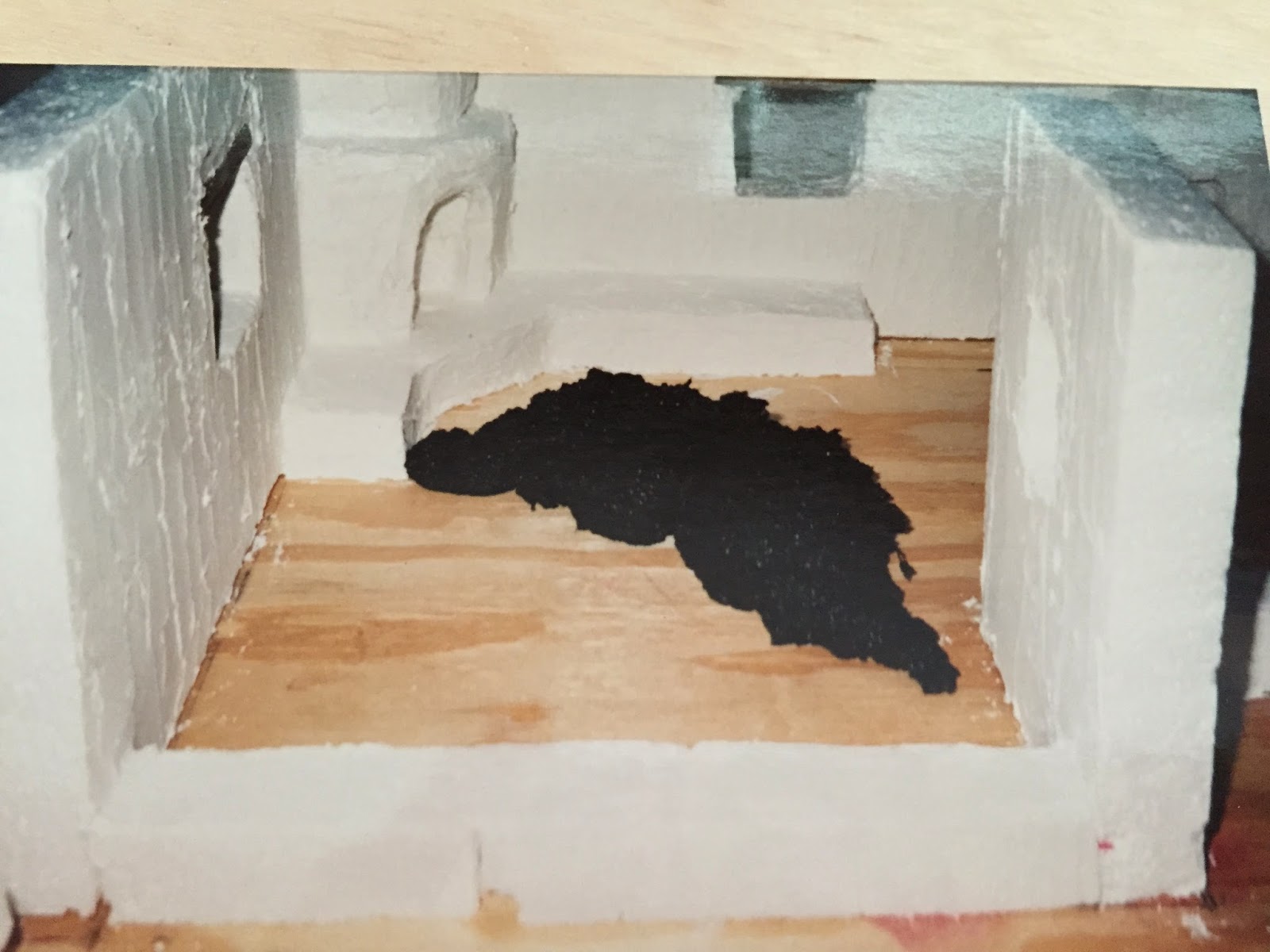 Pour mud onto the floor. That was an easy step. 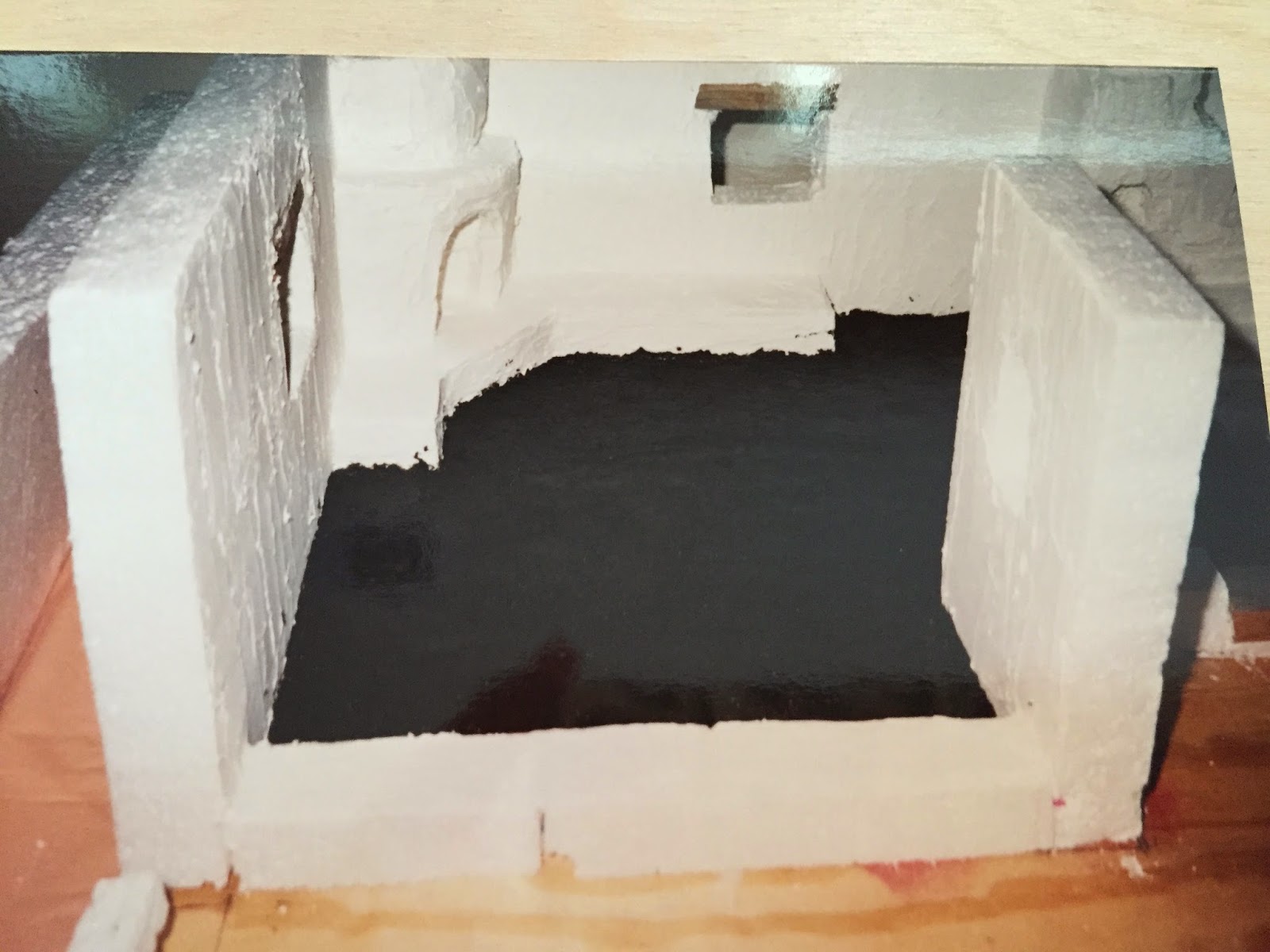 Level with something that won't leave marks on the surface. I'm sure that was easier in my miniature house than a real one. I leveled and smoothed the mud using my hands, a rubber spatula, and a soft rag. 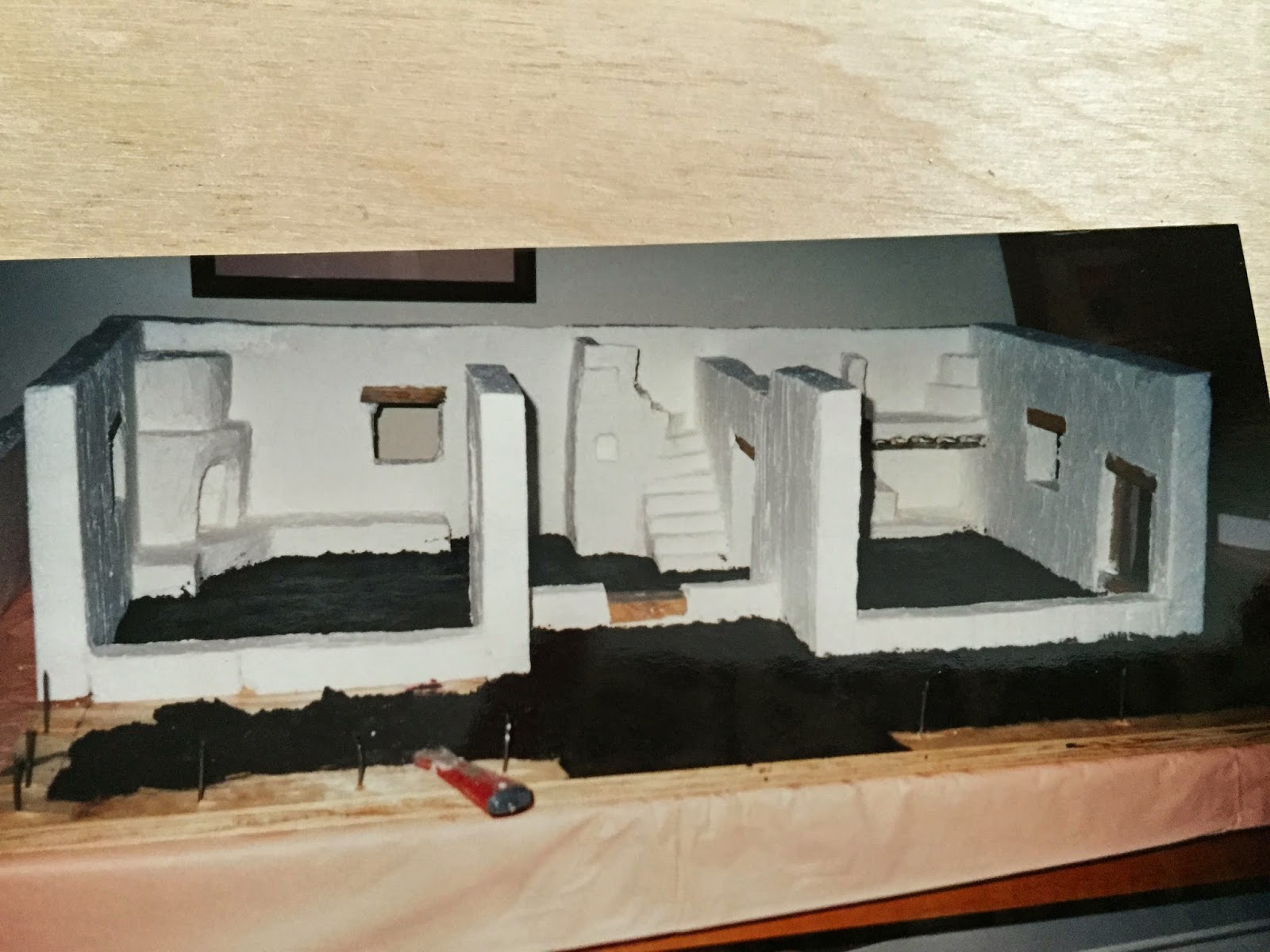 I was instructed to let it dry for ten days. Because that drying time was meant for a full-sized house, I thought it was logical to reduce the time to one-twelfth of ten days, since I was building in one-twelfth scale. But my superior math skills wouldn't let me calculate that, so I just kept checking the mud until it looked and felt dry, which took about two days. I don't know whether that equates to one-twelfth of ten days, but it might be close. Or not. But wait. Something is seriously wrong here. The mud floor is dry, and there is absolutely no resemblance to an adobe brick. This dried mud is black. As black as…black as...black as Nebraska dirt, which is way blacker than New Mexico dirt. So I chiseled out all the black garden dirt and started over. 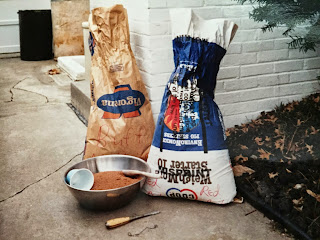 I began my starting over by visiting Yankee Hill Brick, a local company that obligingly sold me two bags of non-black dirt. One was a red dirt with a high clay content and the other a buff-colored dirt that was sandier. I mixed the two together, hoping to happen onto the right ratio of one to the other. 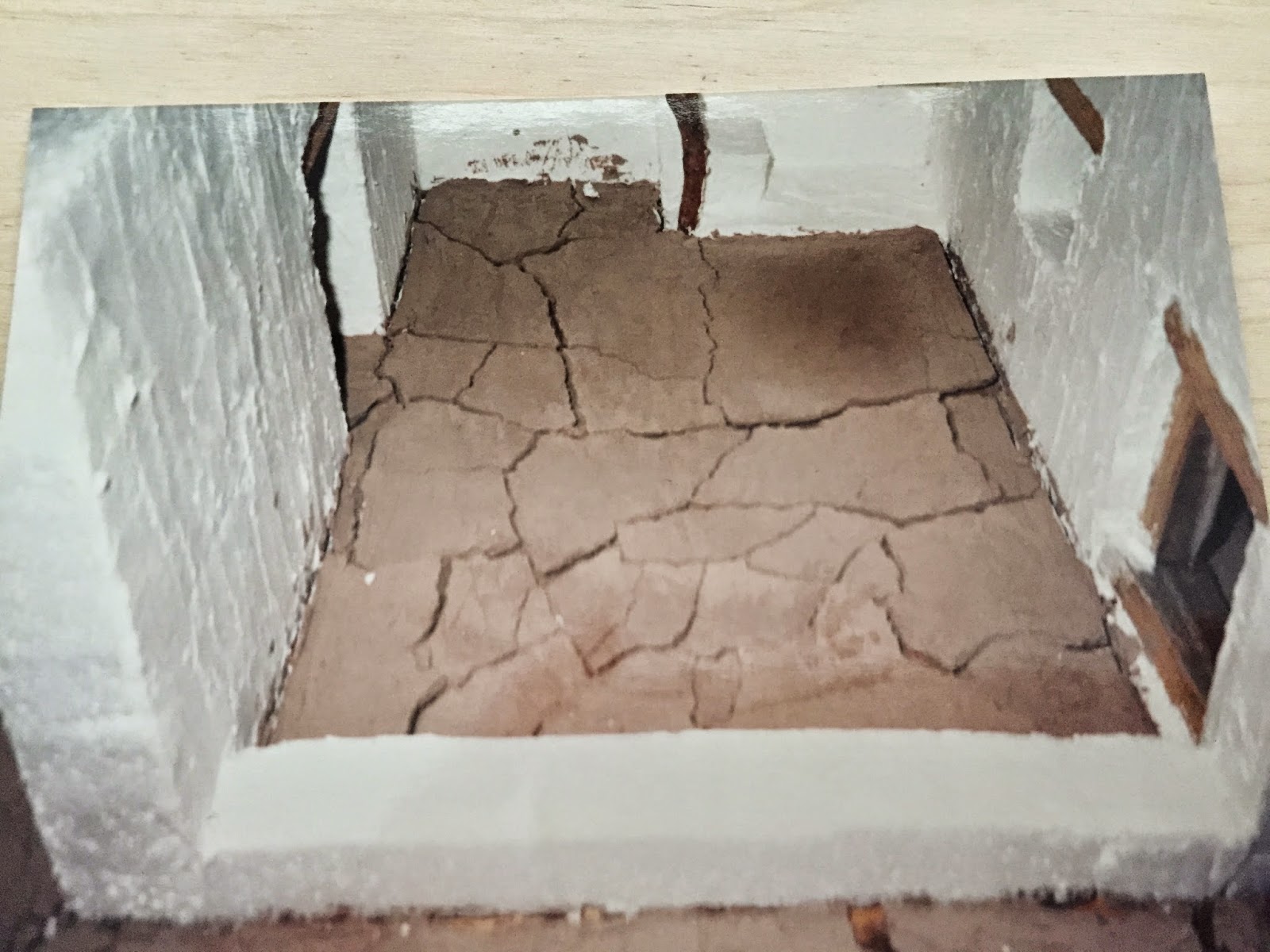 The right ratio did not happen. The color was perfect, but the cracks were way too large. 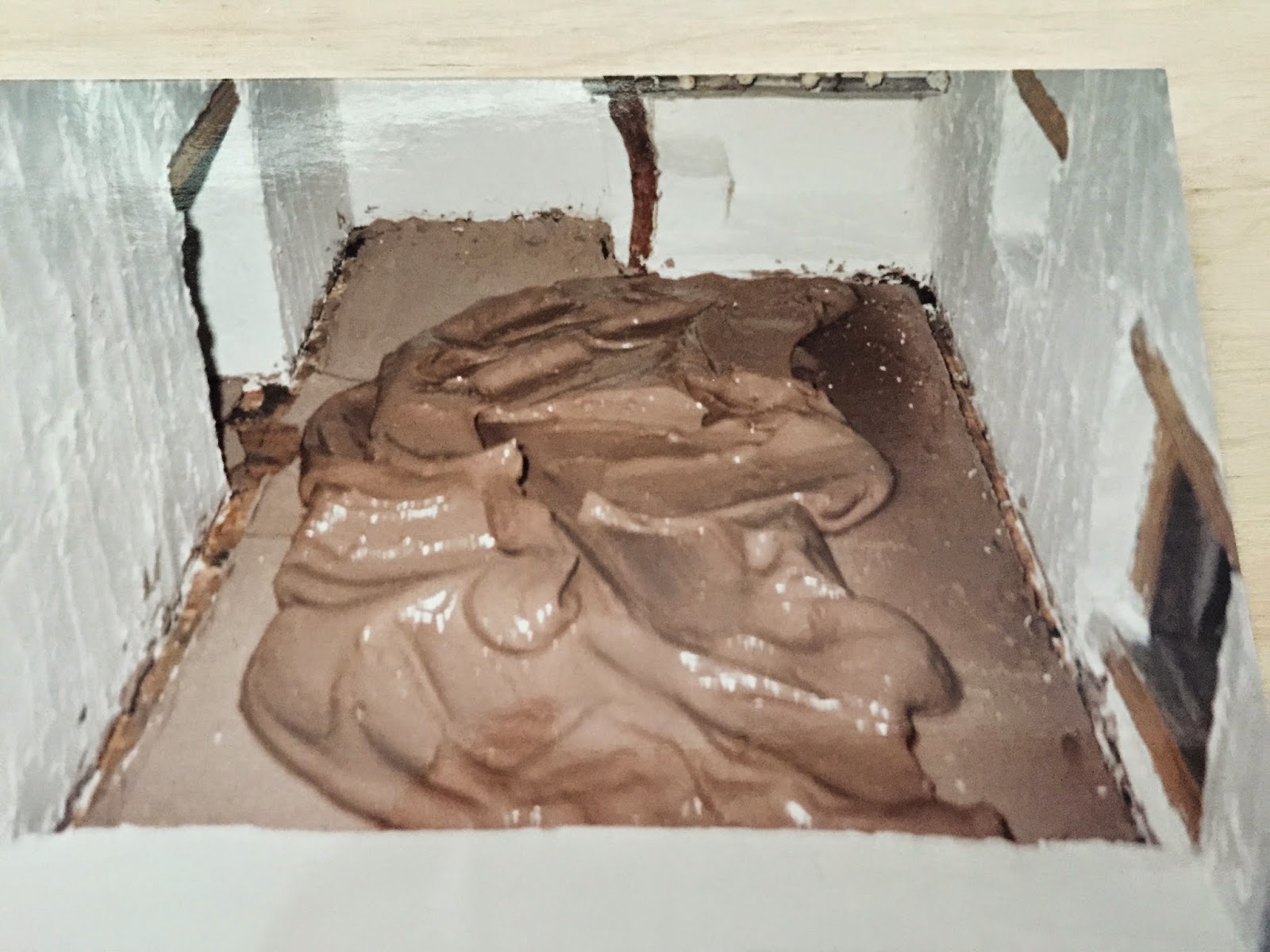 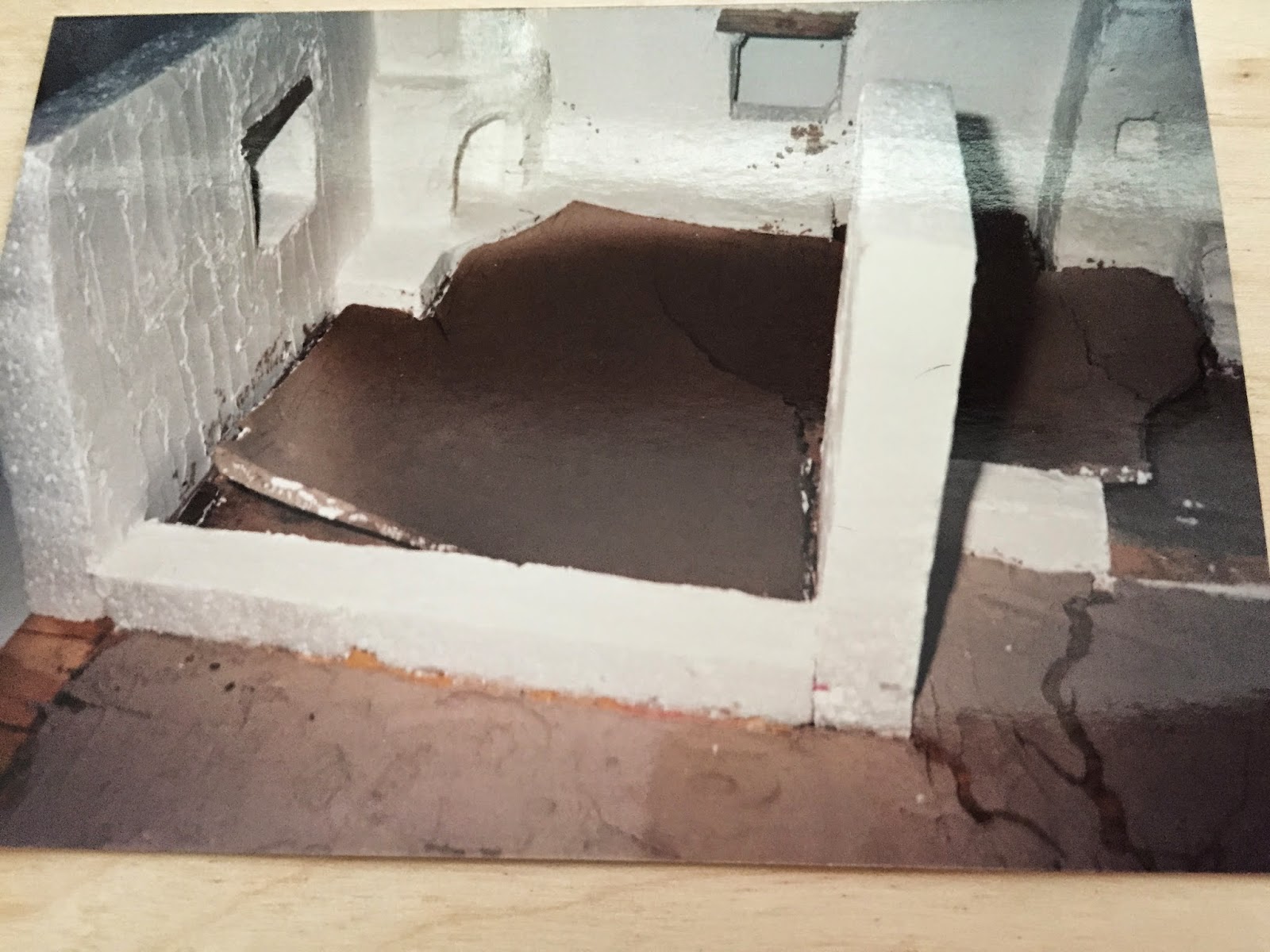 Which was not, after all, such a really good idea. The third pouring, although cracking less, pulled away from the walls and floor and curled up as it dried. Too much sand? Still too much clay? The color was good, but I had to pull it all up and start over, sacrificing that nice color. 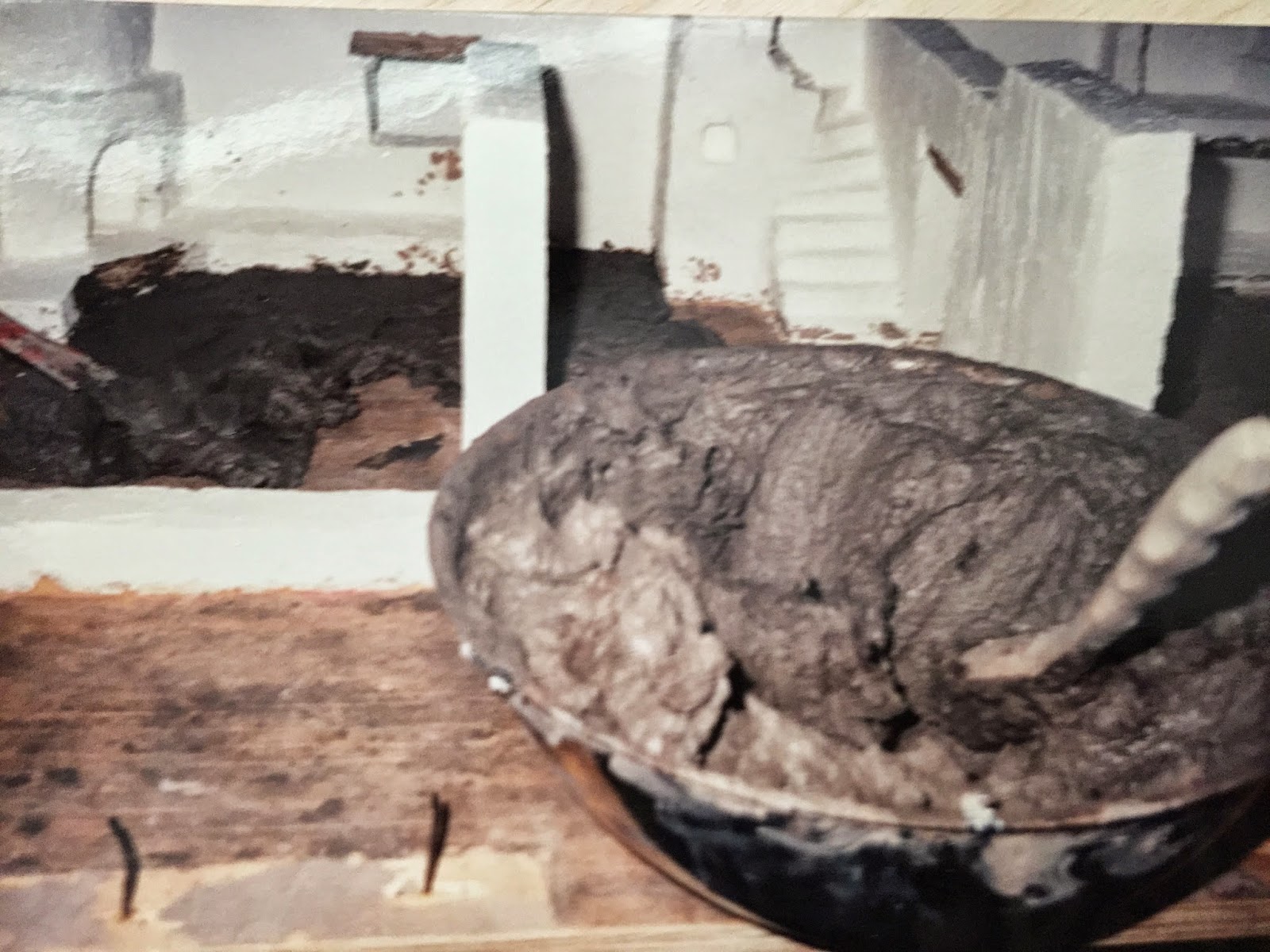 So, back to the garden for more black, black dirt. Since the black dirt had dried well, I thought I would try it again for my fourth pouring. I was reluctant to use the red dirt with the higher clay content, but I mixed the buff dirt in with the black to lighten the color of the mixture. 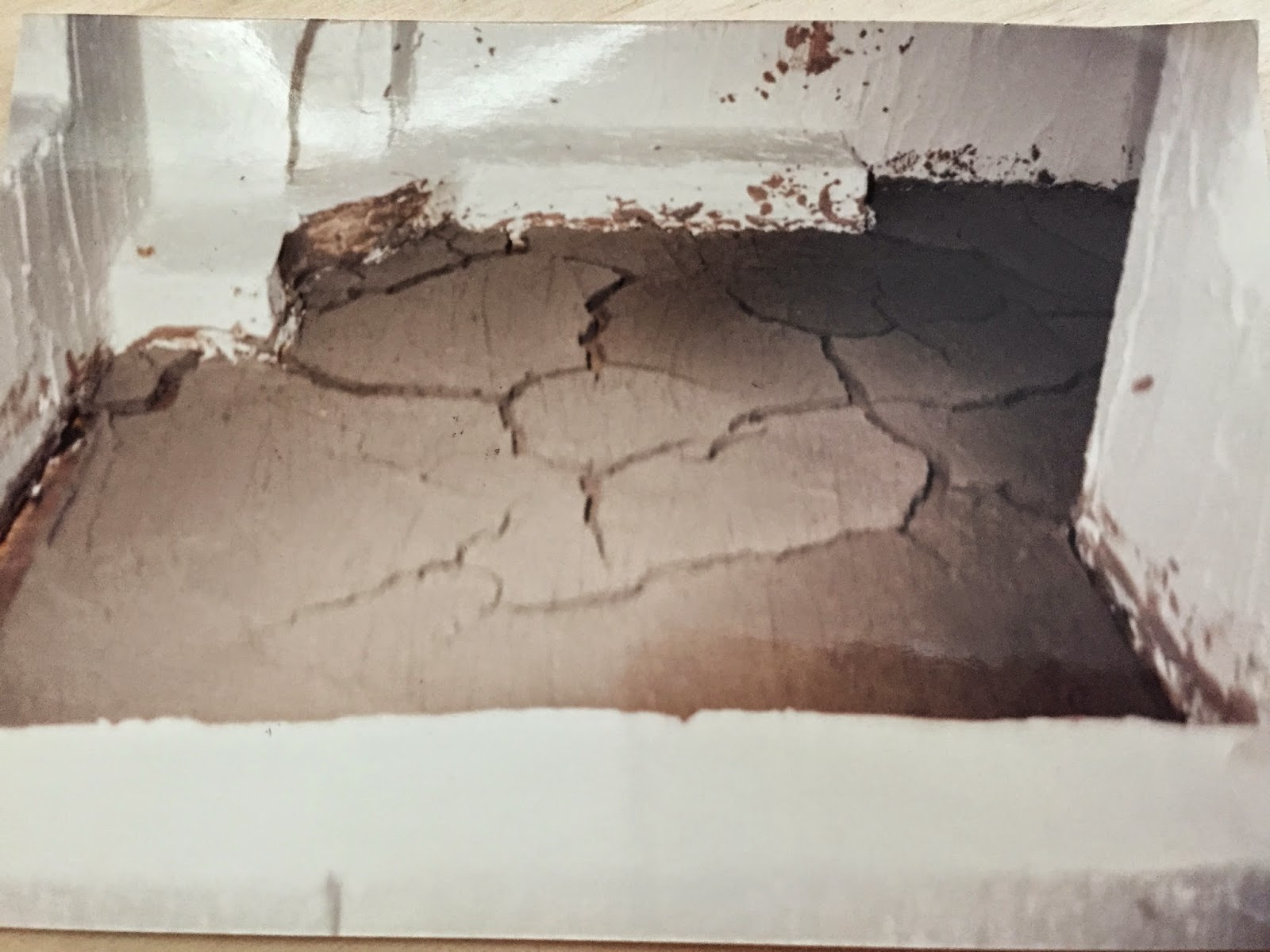 The dried fourth pouring resulted in large cracks and some shrinkage, but it did not curl up and die as  the third pouring did, so I decided not to remove it. 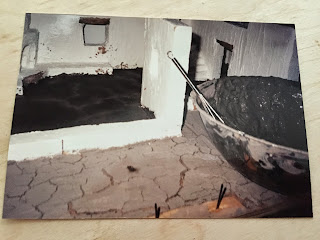 Instead, I mixed up another batch of garden black and Yankee Hill buff and poured the fifth layer right over the fourth. I figured that the mud wasn't likely to crack in exactly the same places, so the new layer should fill in the existing cracks. (While creating others in new places, unfortunately.) But I had finally completed the instruction to let it dry! 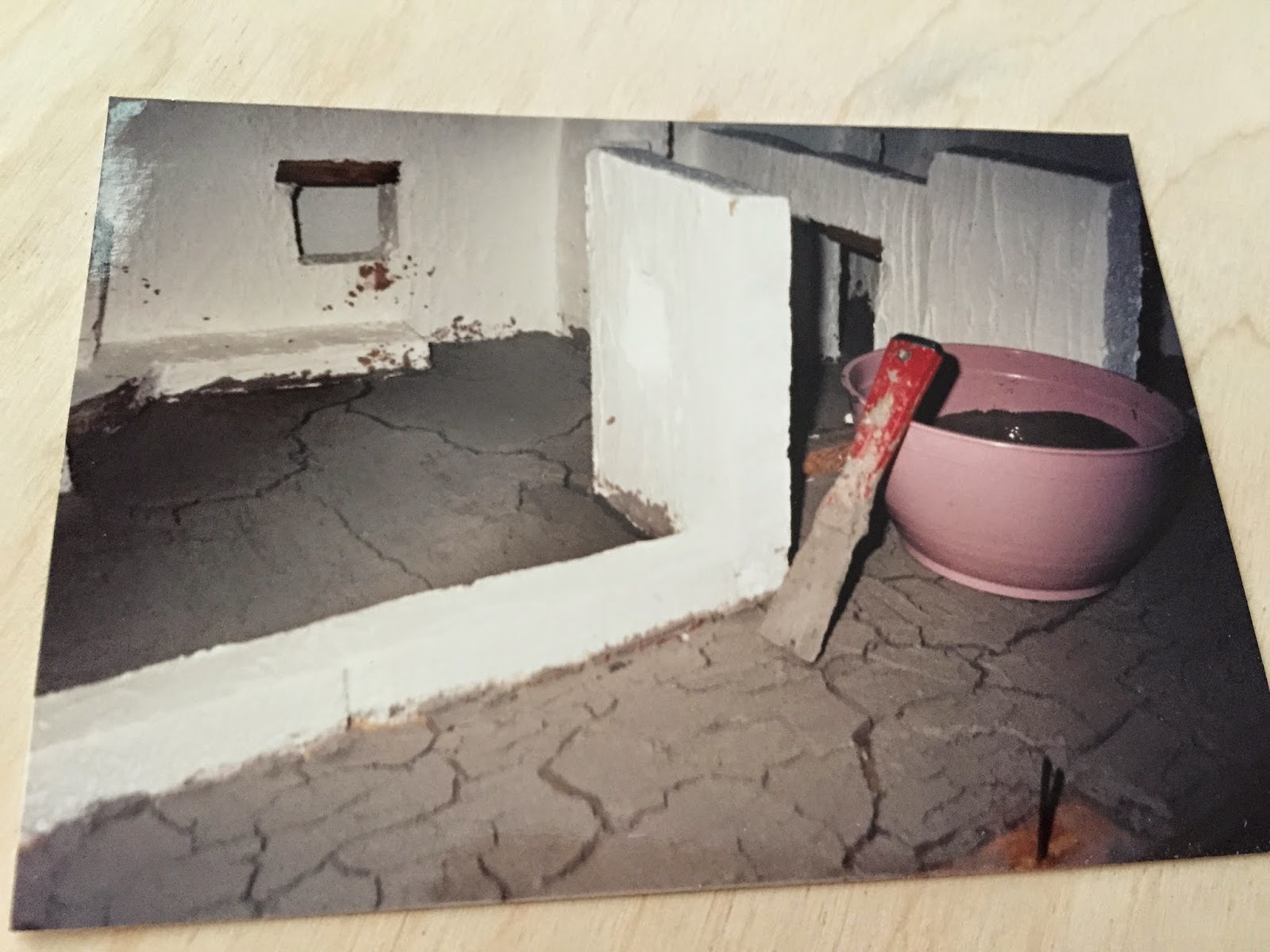 For the next step, I was instructed to fill any cracks with a "slip" - mud thin enough to pour from a container with a spout, which I did, using the same garden black and Yankee Hill buff, only much thinner than fudge. The color is not bad, although not approaching perfect. I do know when to quit. 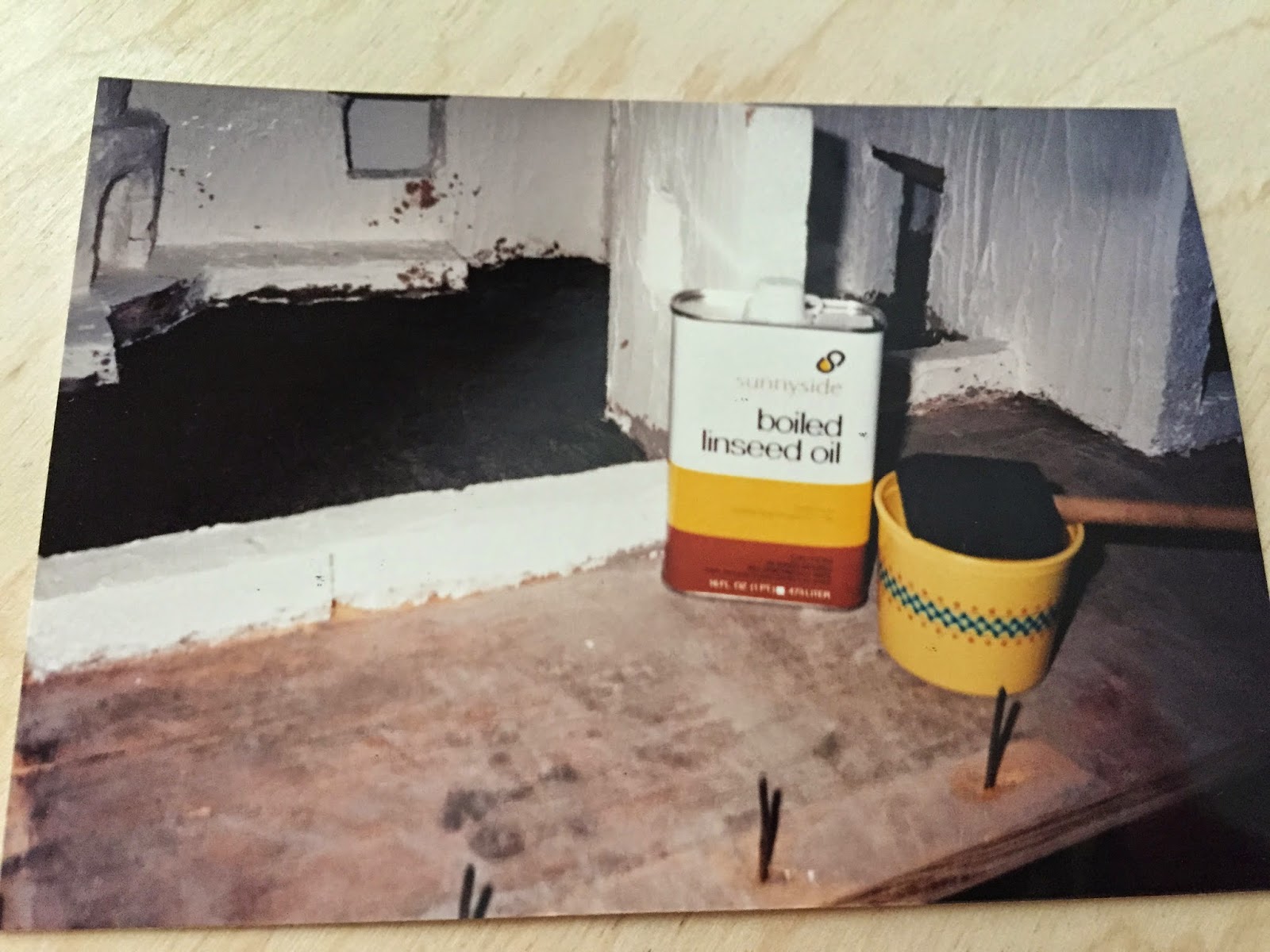 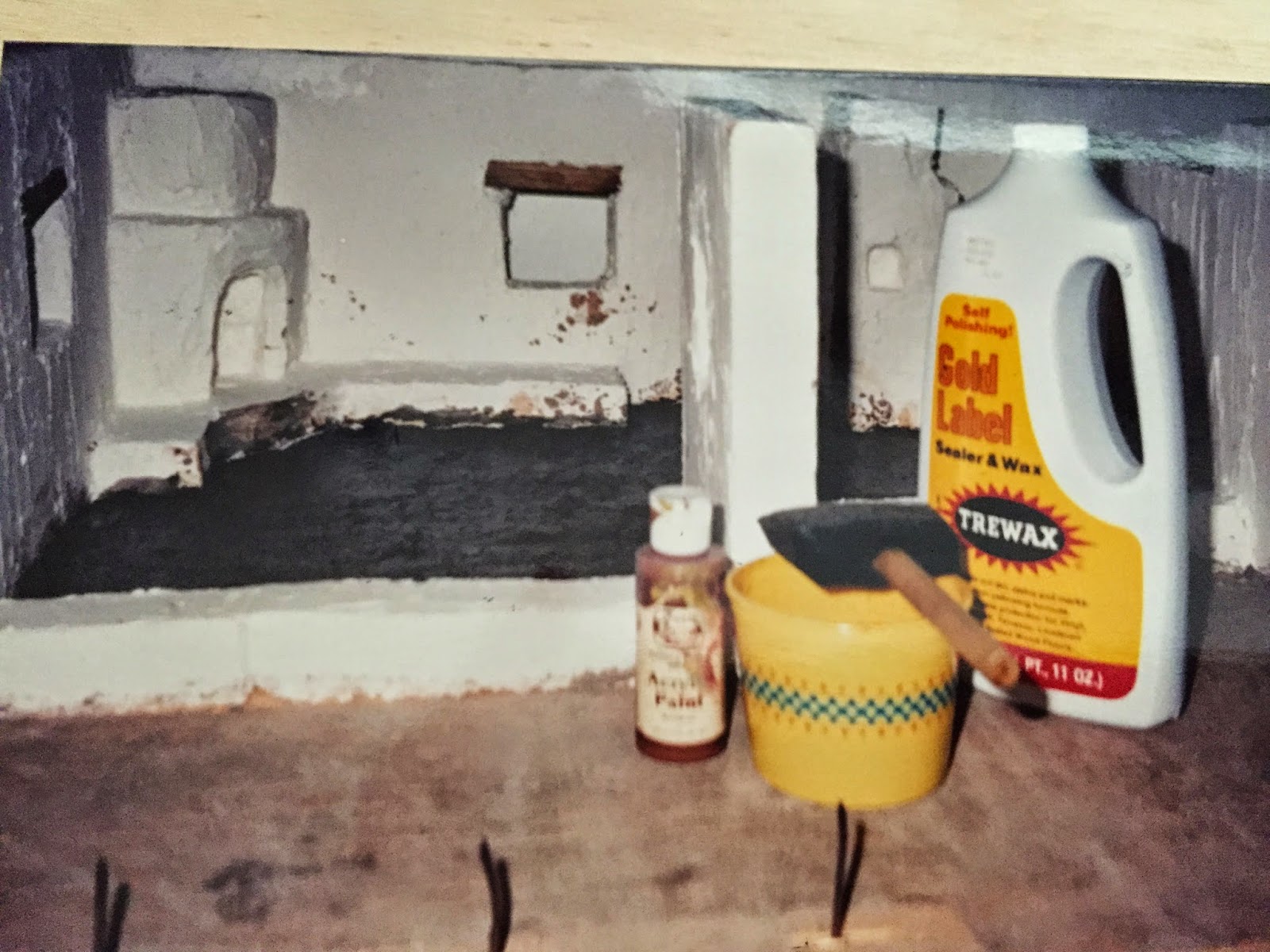 The floor looks darker in this photo than it actually turned out. But it was darker than I liked, so instead of following my final instruction to apply a liberal second coating of the blood and ash mixture, I created a concoction of a reddish stain, floor wax, and linseed oil. I did, however, apply it liberally. 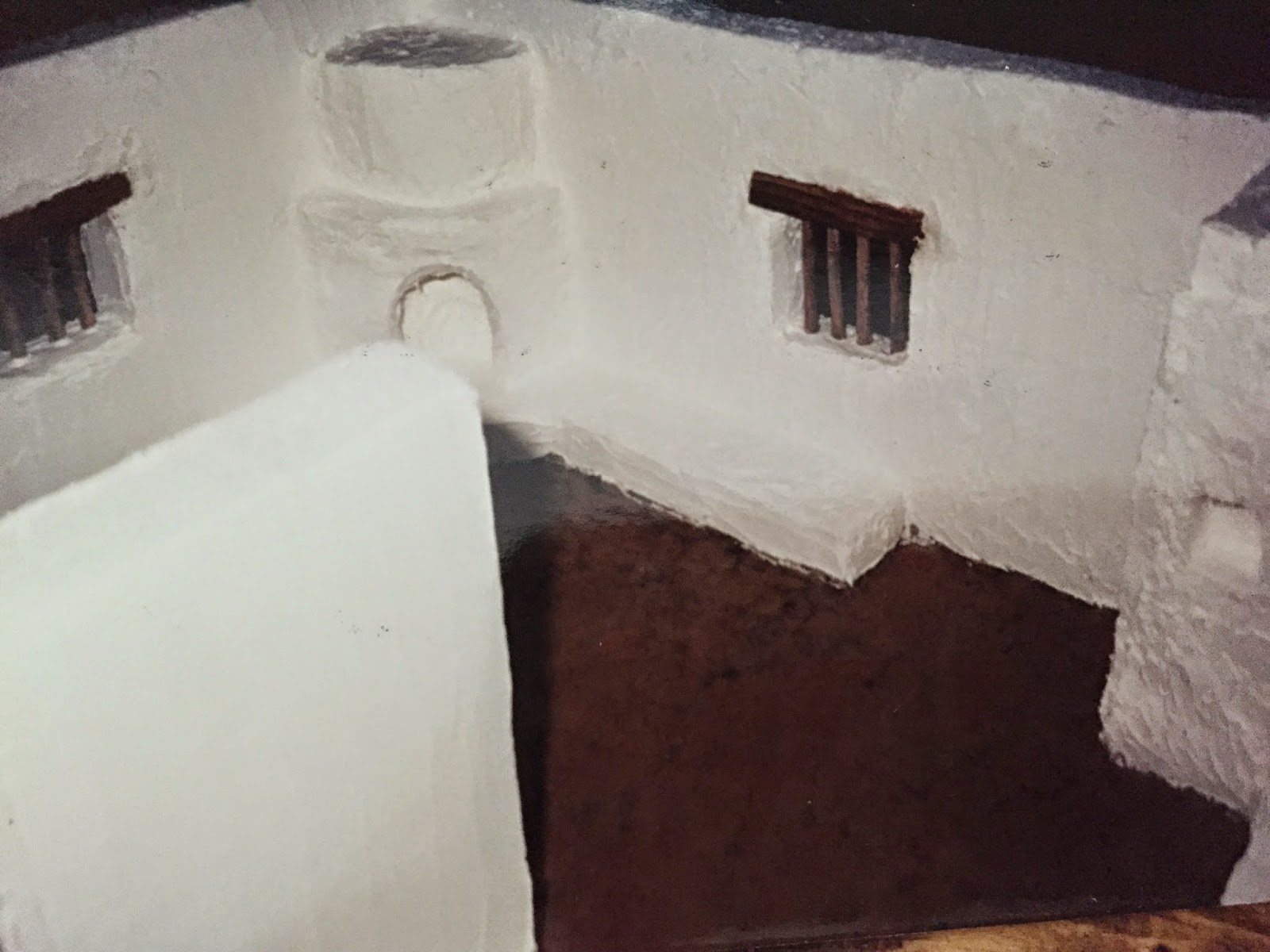 The earthen floor was finished at last, and I was pleased with it, even if the process was not, as my
instruction book led me to believe, "as easy as making mud pies!"

Thank you for sharing my adobe flooring fiasco. This post is the final one for my adobe experience, but not an end to the fun! My next post will begin in the south of France, where I'll embark upon the many adventures and adversities that I encountered while I built the French Farmhouse - using, of course, my favorite materials: sticks and stones and styrofoam.

I hope you'll come along with me.