My adobe house is finished at last! Not that I was in a hurry to finish it, because I was having so much fun; why would I want it to be over? On the other hand, I had been working on the house for about ten months or more, as I mentioned in a previous post, and was ready for a change. I'm not really sure about the number of hours that I spent laboring over the adobe; it was only afterwards, when I was asked many, many times how long it had taken me to build the house, that I realized that it would be sort of nice to have an answer.

All I know for sure is that I spent three winters working on the adobe; I never worked on it at all during the summer and autumn months. The first winter was actually early spring, but cold enough to be labeled winter, and for the following two winters I continued the work. But of course I'm talking about Nebraska winters, which can sometimes be as short as four months and sometimes as long as six months.

But it was finally finished, inside and outside - and now it's time to take a tour. 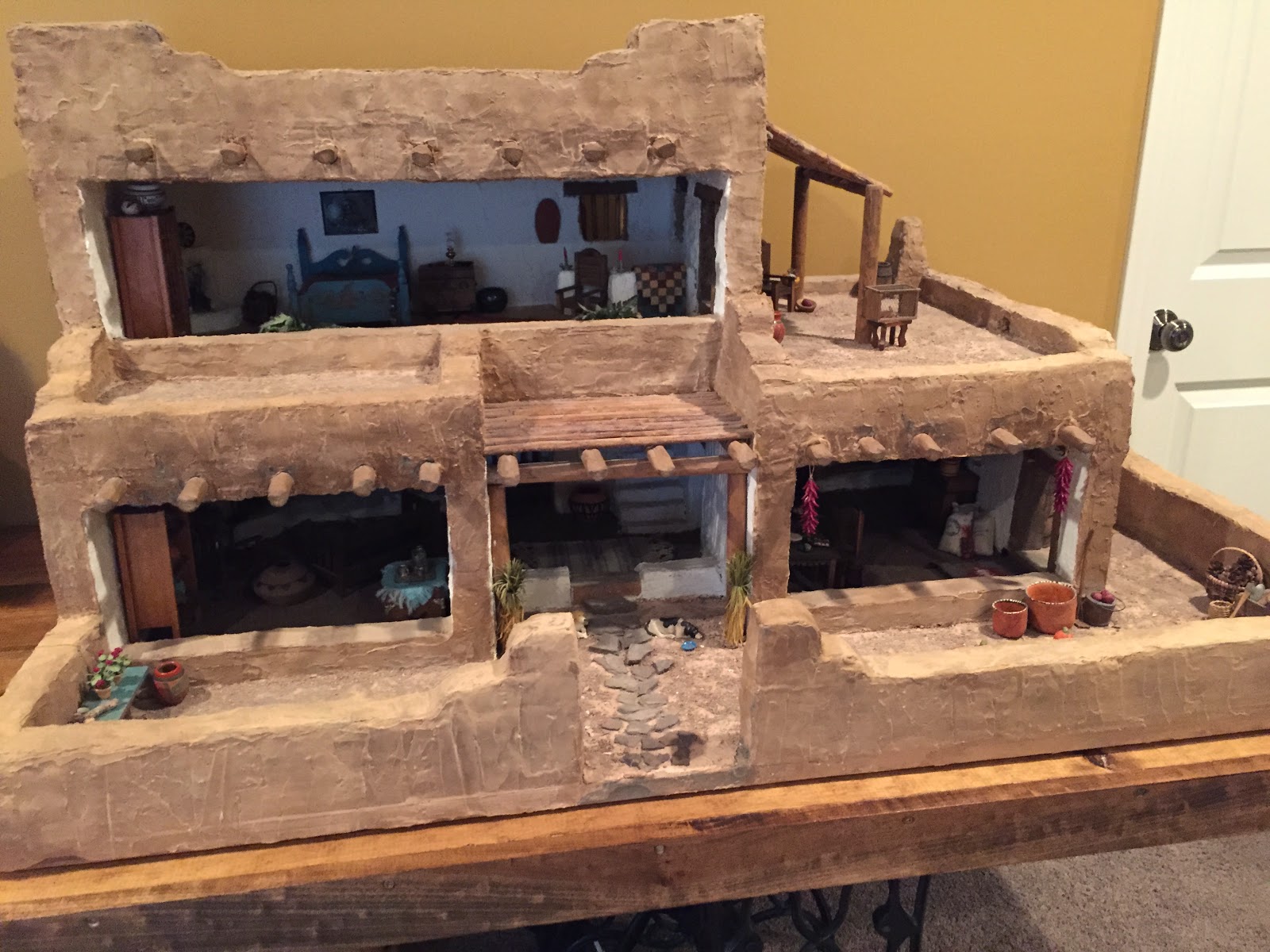 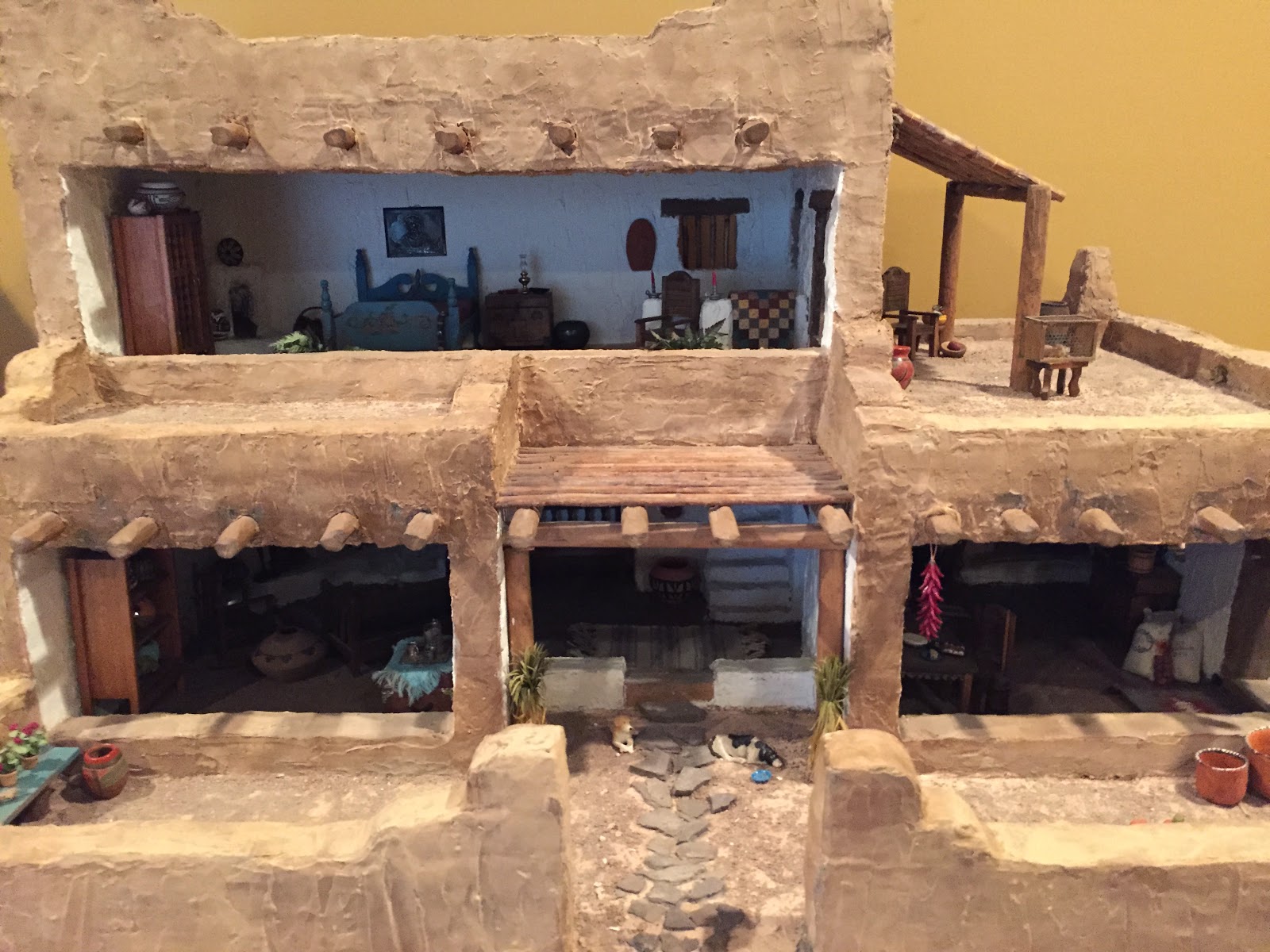 We'll begin by viewing the adobe from the front, as we approach the entrance through the wall that surrounds the house. 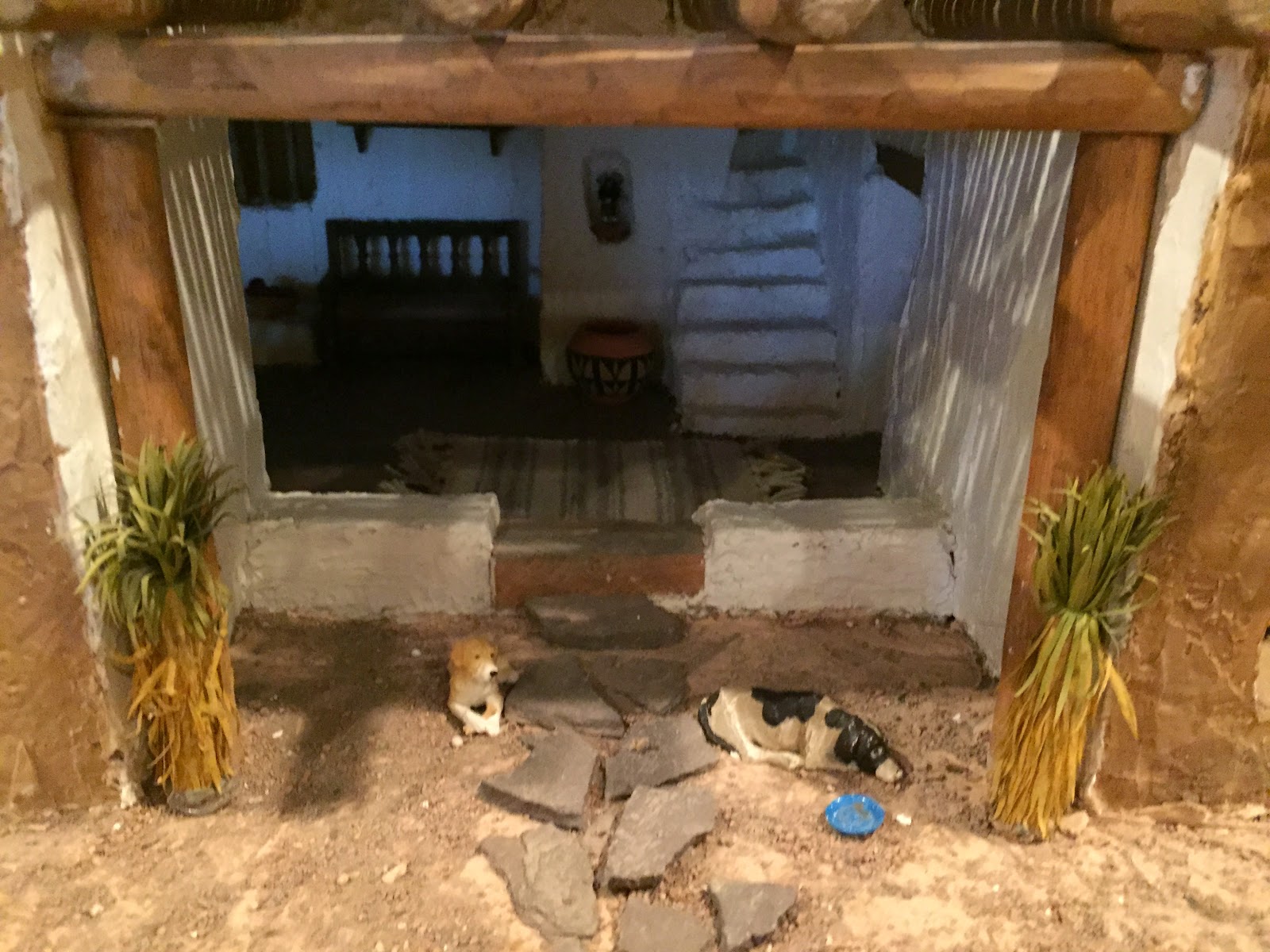 Guarding the front door, we find Honey and Martin, who hardly bother to greet us. Martin is more interested in guarding his food bowl and Honey in protecting her bone! 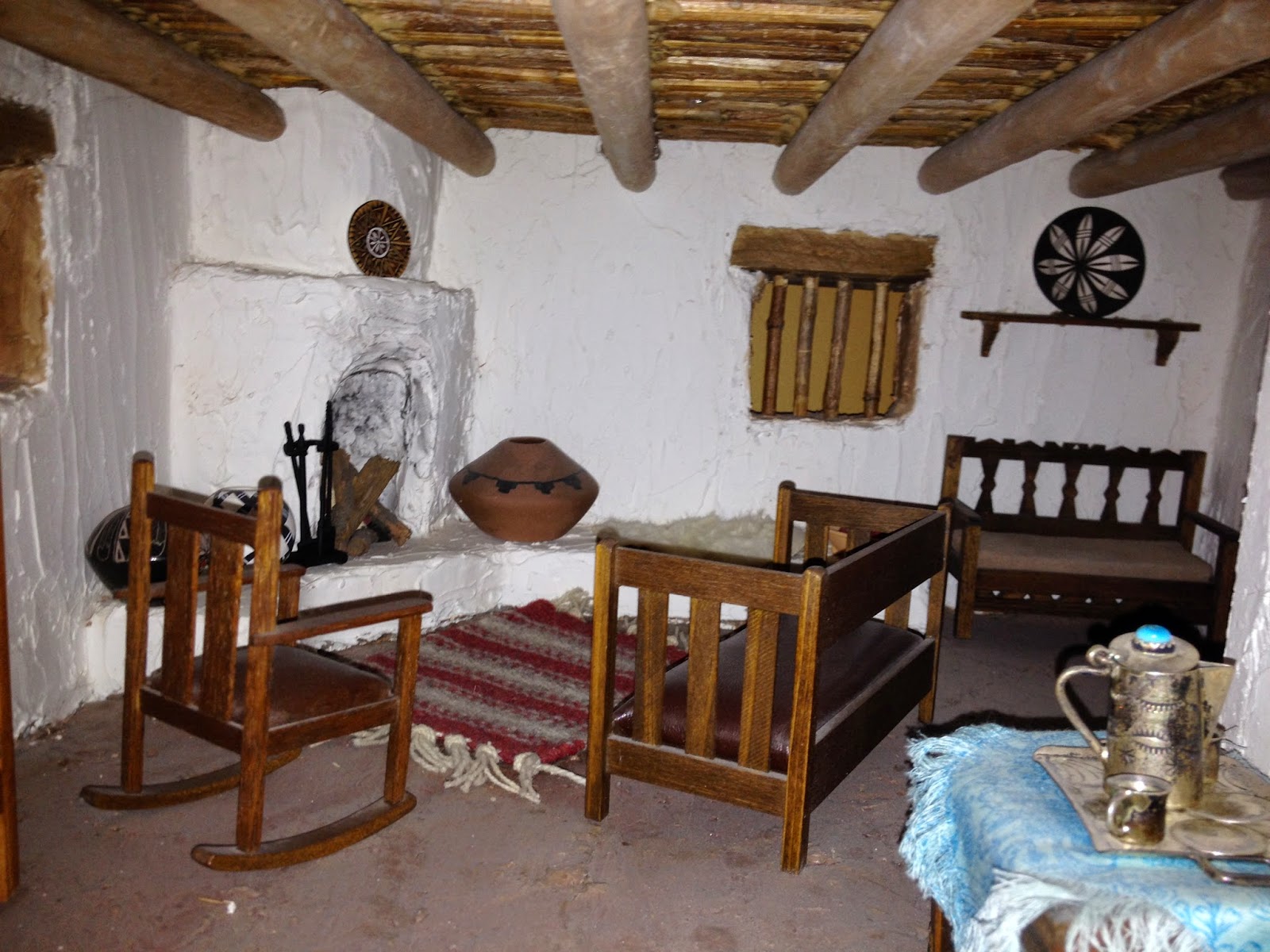 When we enter the house and turn to the left, we'll be in the living room. The kiva fireplace has an extended bench, or banco, that provides a cozy seat on the sheepskin rug. Ana Luisa's silver tea (or coffee) set, which was a wedding gift, is on the trunk in the foreground. 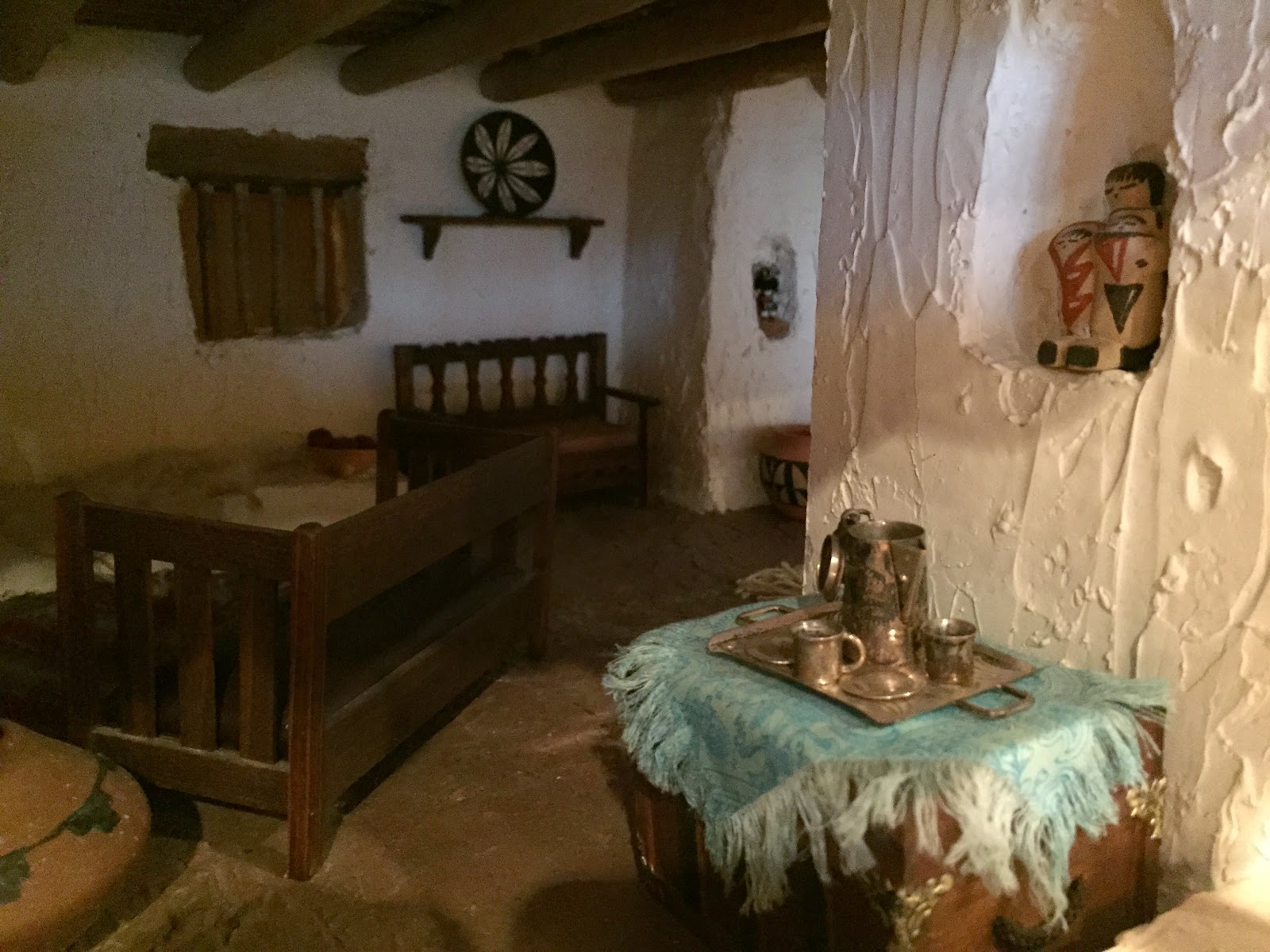 In the nicho over the tea set, there is a traditional pueblo "storyteller" figurine; she is singing and telling stories to her children. 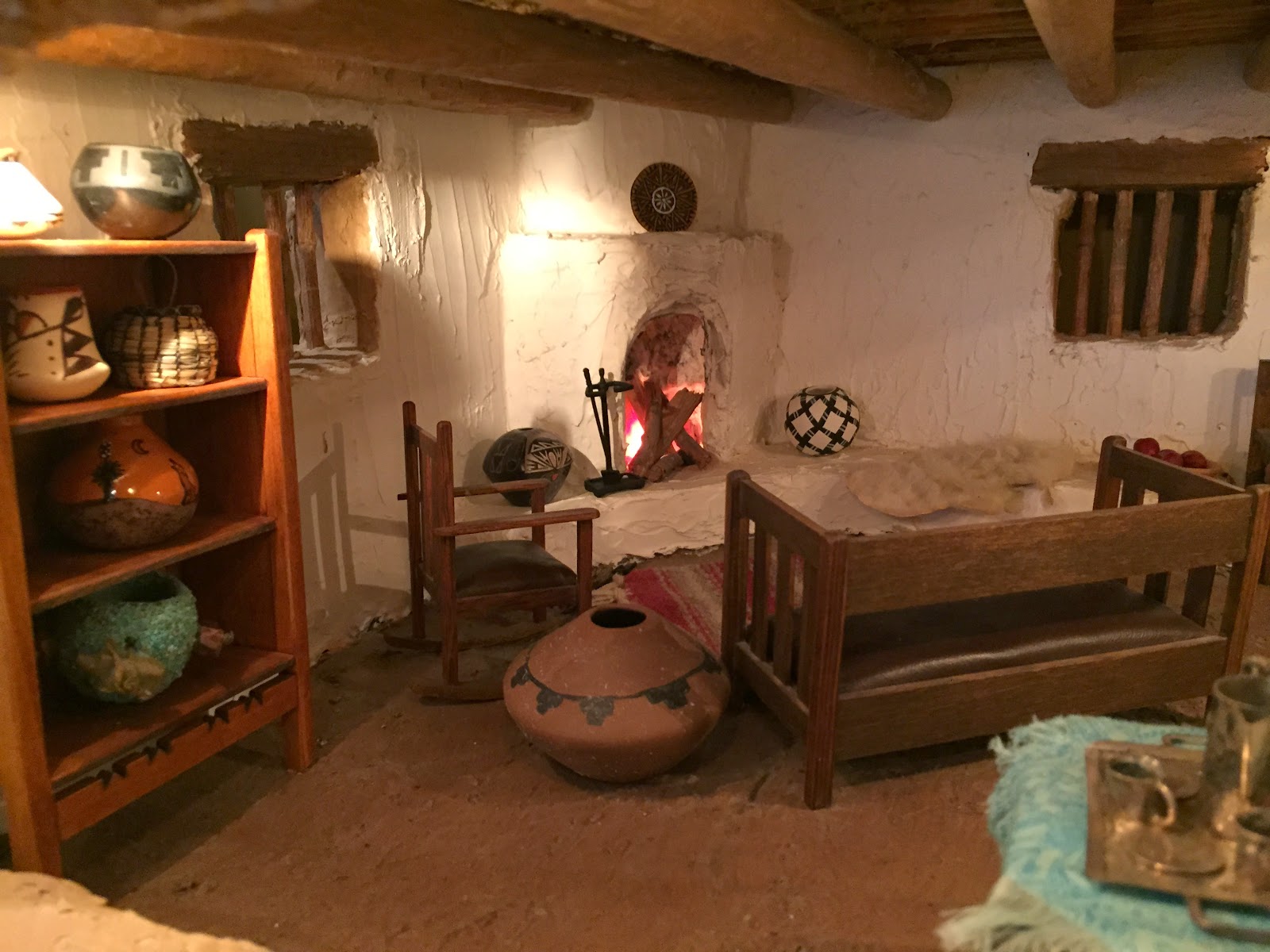 You may notice that Ana Luisa has rearranged some clay pots, after acquiring a new one that she thinks looks very well beside the fireplace. 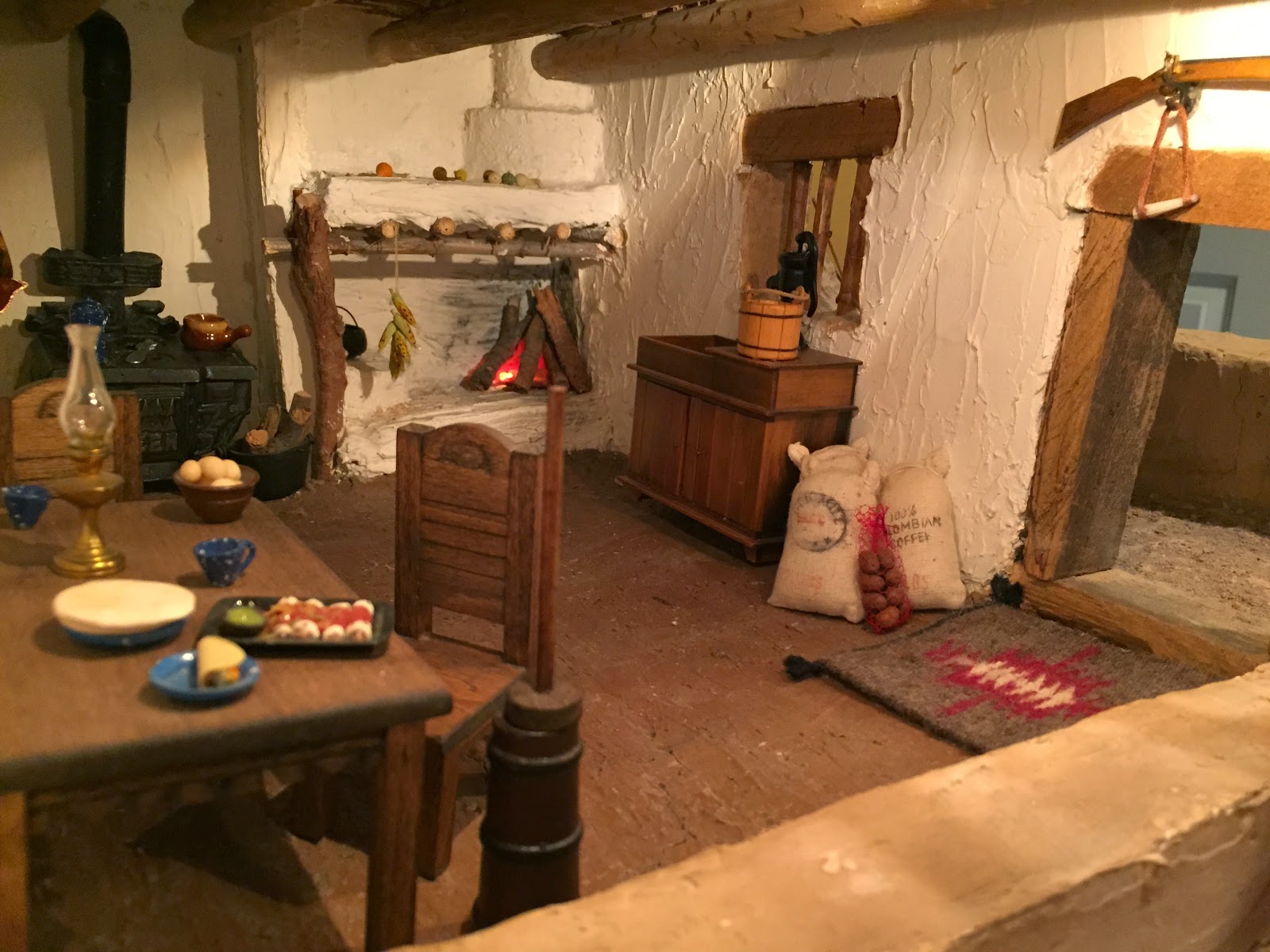 If we had turned to the right upon entering the house, we would find ourselves in the kitchen, where a fire is almost always kept burning, or at least banked, in the "shepherd's" fireplace. Ana Luisa has vegetables drying on the shelf above the fireplace now, but the shelf can also be used for warming and drying a shivering shepherd after a cold night watching over the sheep. The kitchen door leads out to the courtyard, providing Ana Luisa quick access to the oven and the wood pile. 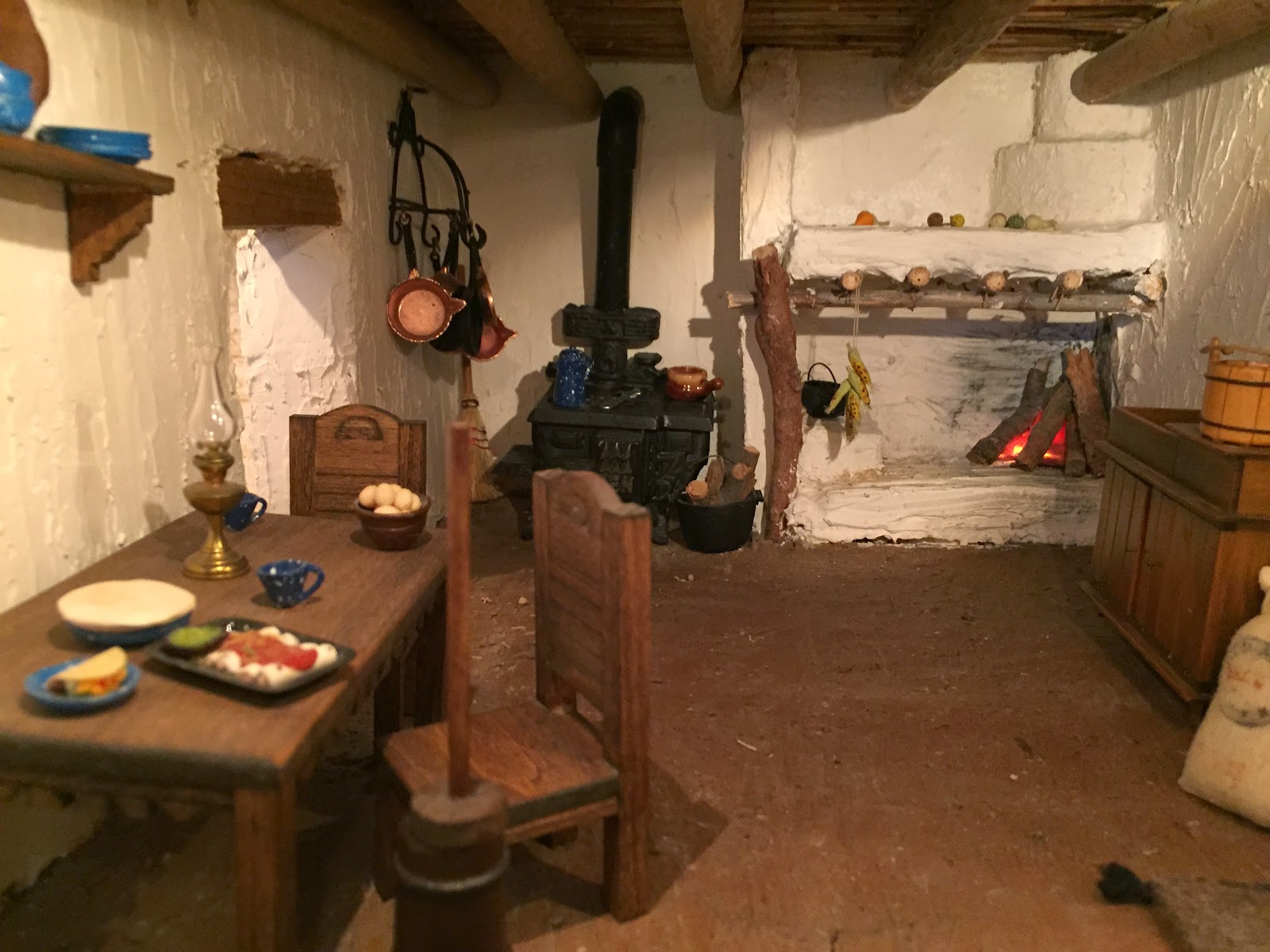 After living in the house for several years, Ana Luisa and Joseph bought a new wood-burning stove that makes quick work in the kitchen for Ana Luisa; she was accustomed to spending many hours cooking with only the fireplace. 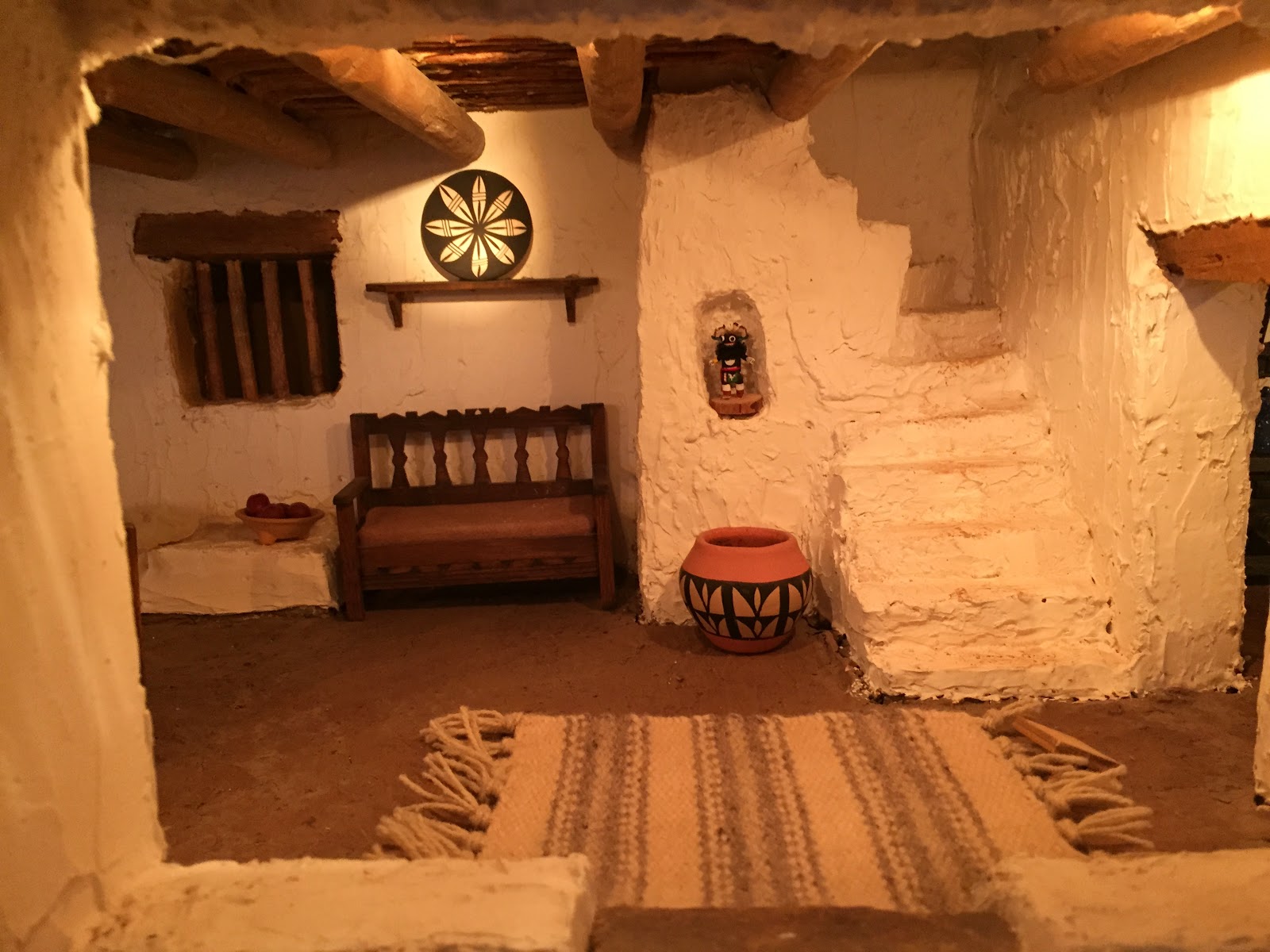 We're back at the front entrance and ready to go upstairs to the bedroom. As you pass the nicho over the big clay pot, take a look at the carved kachina doll displayed there. 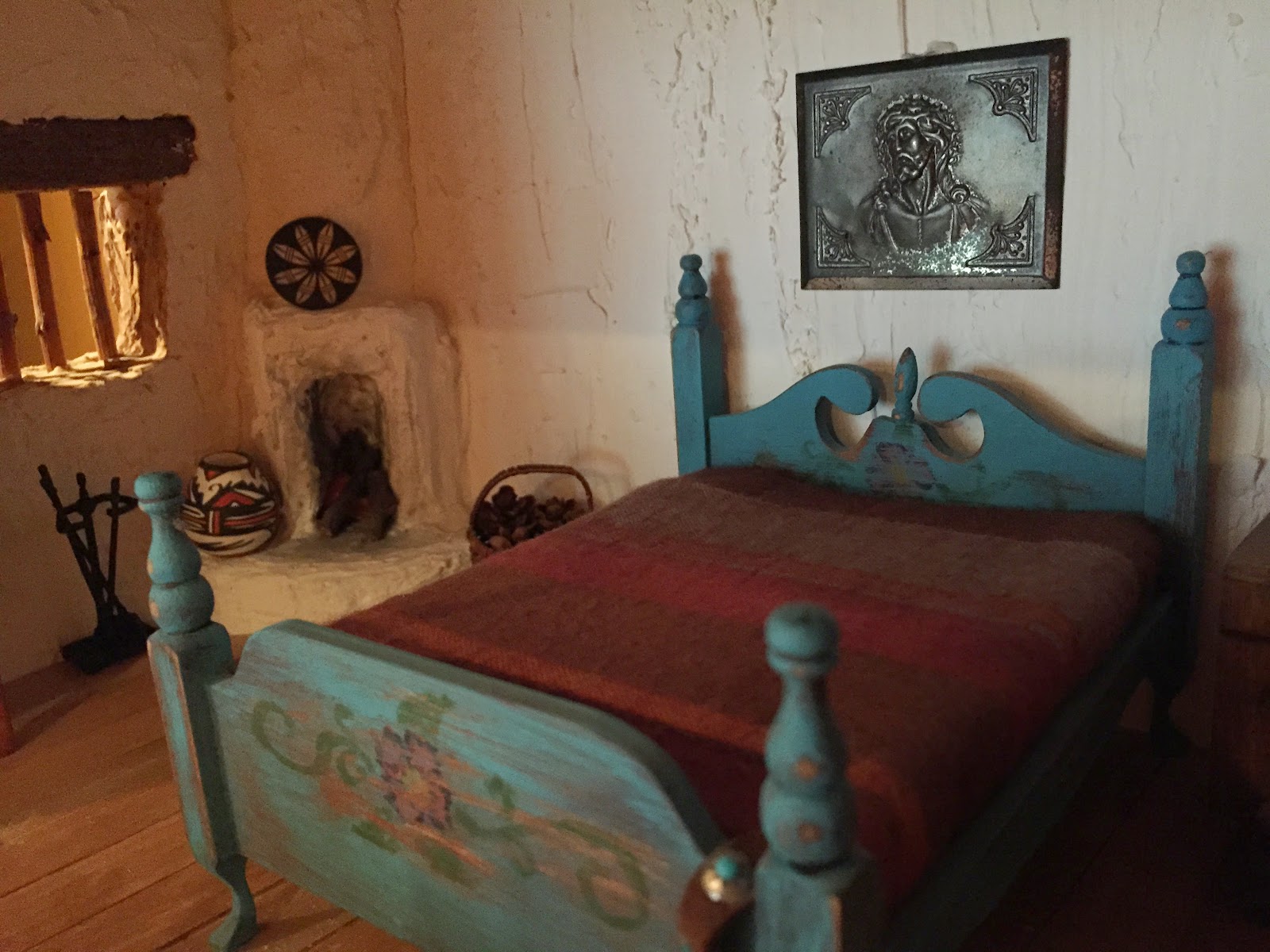 There is a second kiva fireplace in the bedroom. The tin bas-relief of Christ that hangs over the bed is a little treasure that I found in Germany. 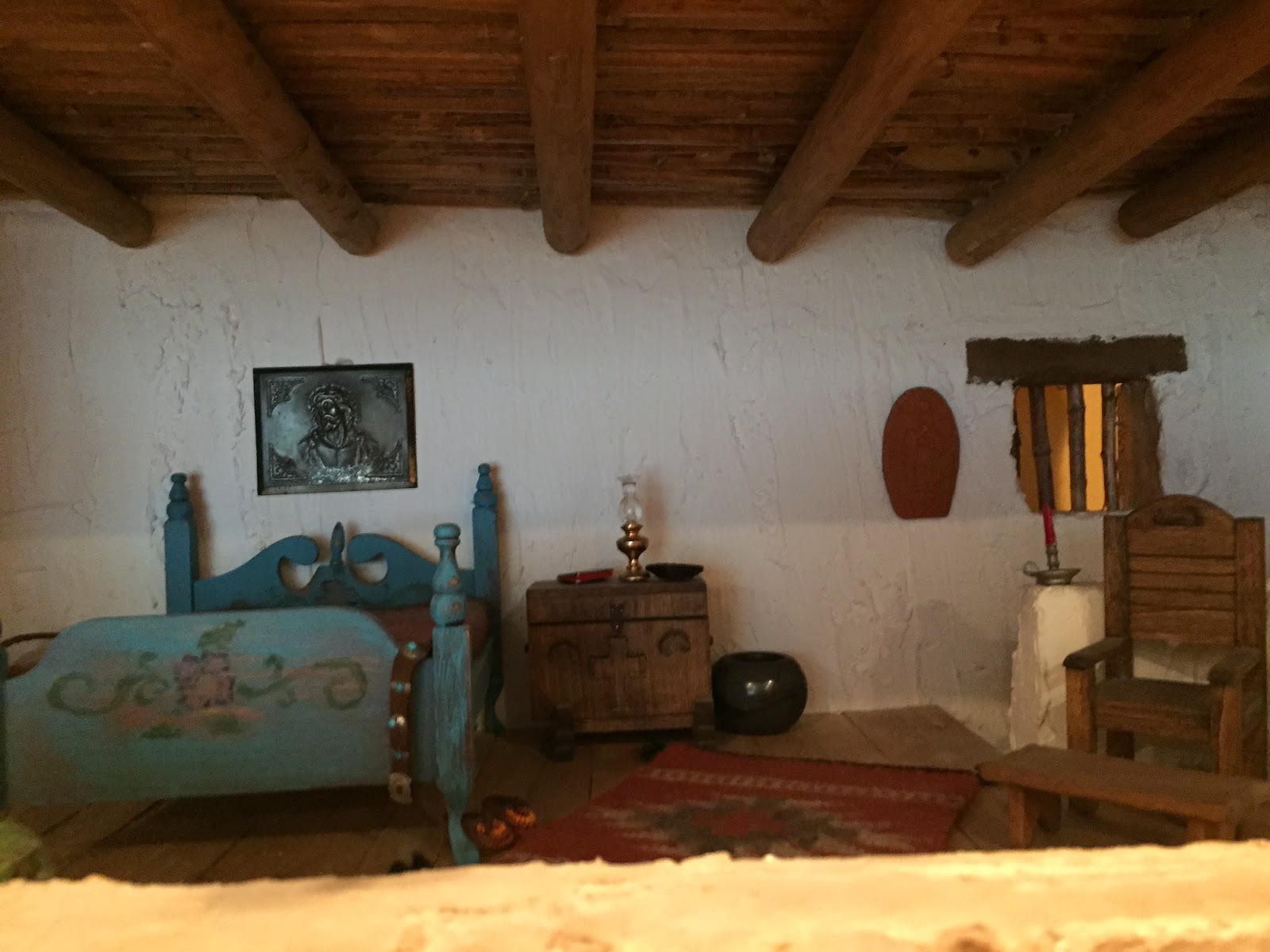 This photo shows the bedroom ceiling and the stairwell that is protected by a low wall. The terra cotta piece that hangs on the wall beside the window depicts Our Lady of Guadalupe. 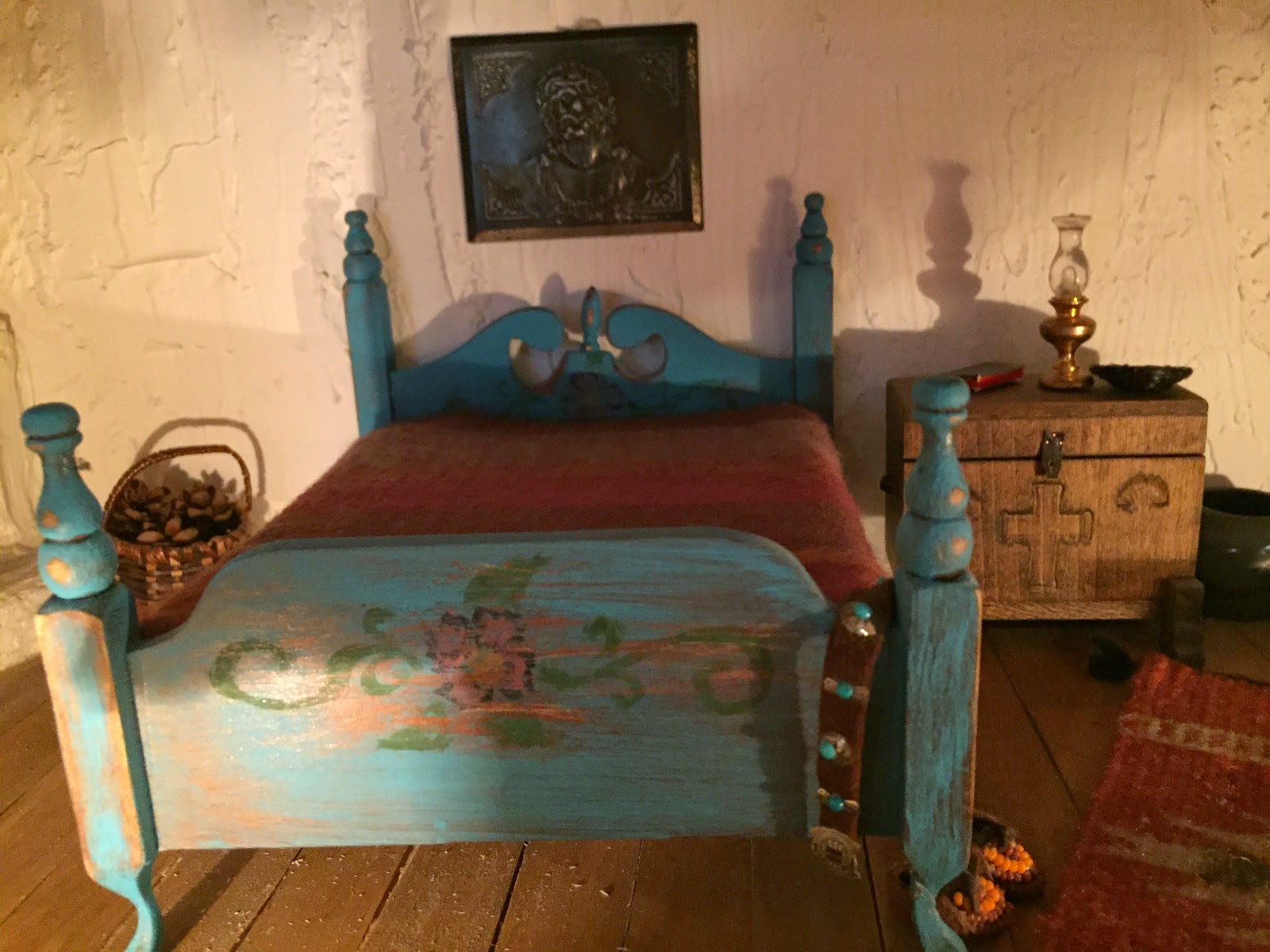 I'm always surprised that miniature pieces have miniature shadows! (There is no way that I can explain this thought process.) The belt with silver and turquoise trim and the beaded moccasins were the first items that I found for the adobe house. The bed was originally a shiny mahogany one that I found at a sale and refinished. The flower design is a combination of stencil and free-hand painting. It wasn't quite what I had envisioned, but I decided to let well enough alone - I figured that it would only get worse; I don't draw all that well! 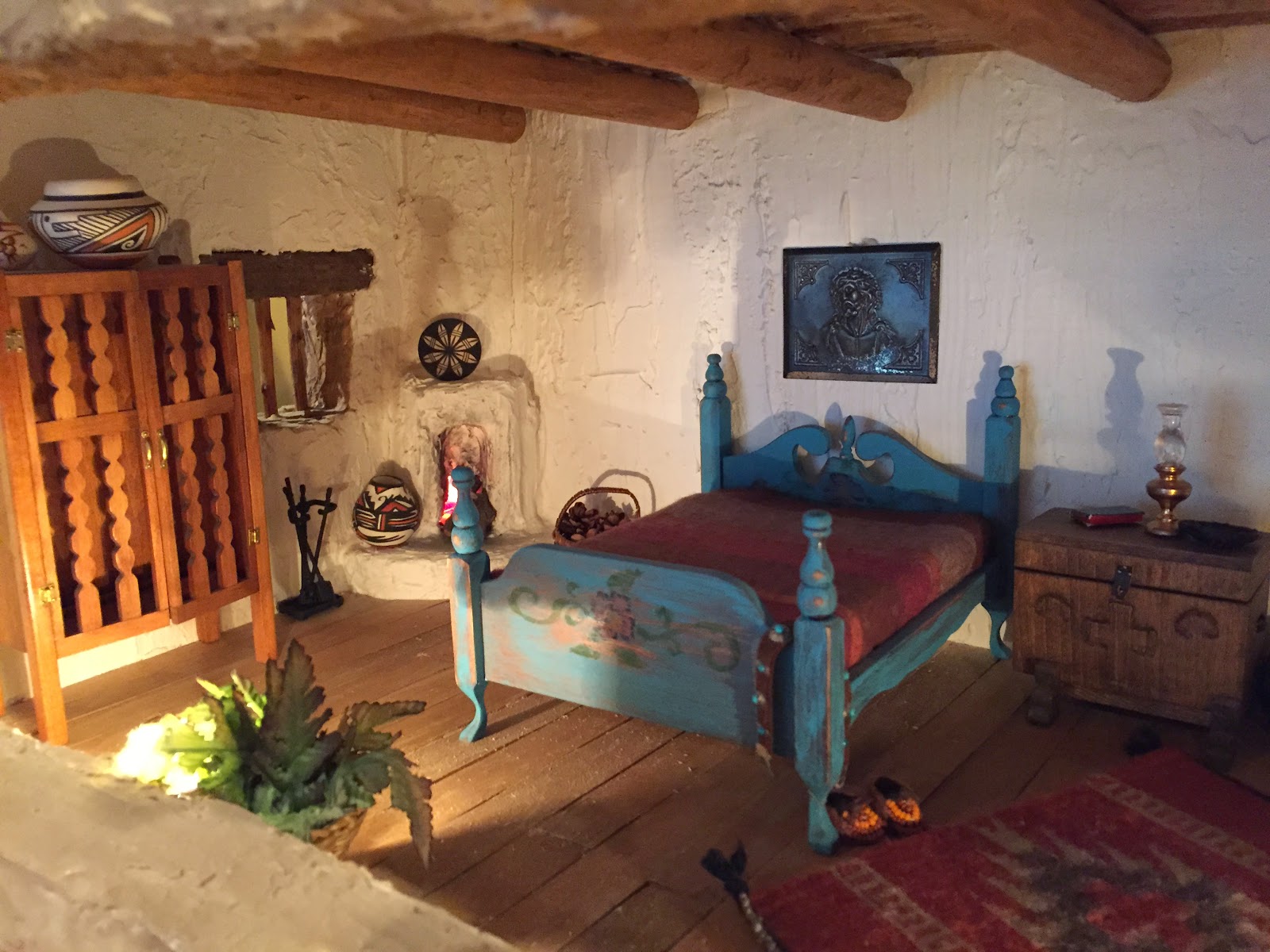 Ana Luisa and Joseph have no closet (nor many pieces of clothing) but they do own a beautiful carved trastero that is very useful for storage. 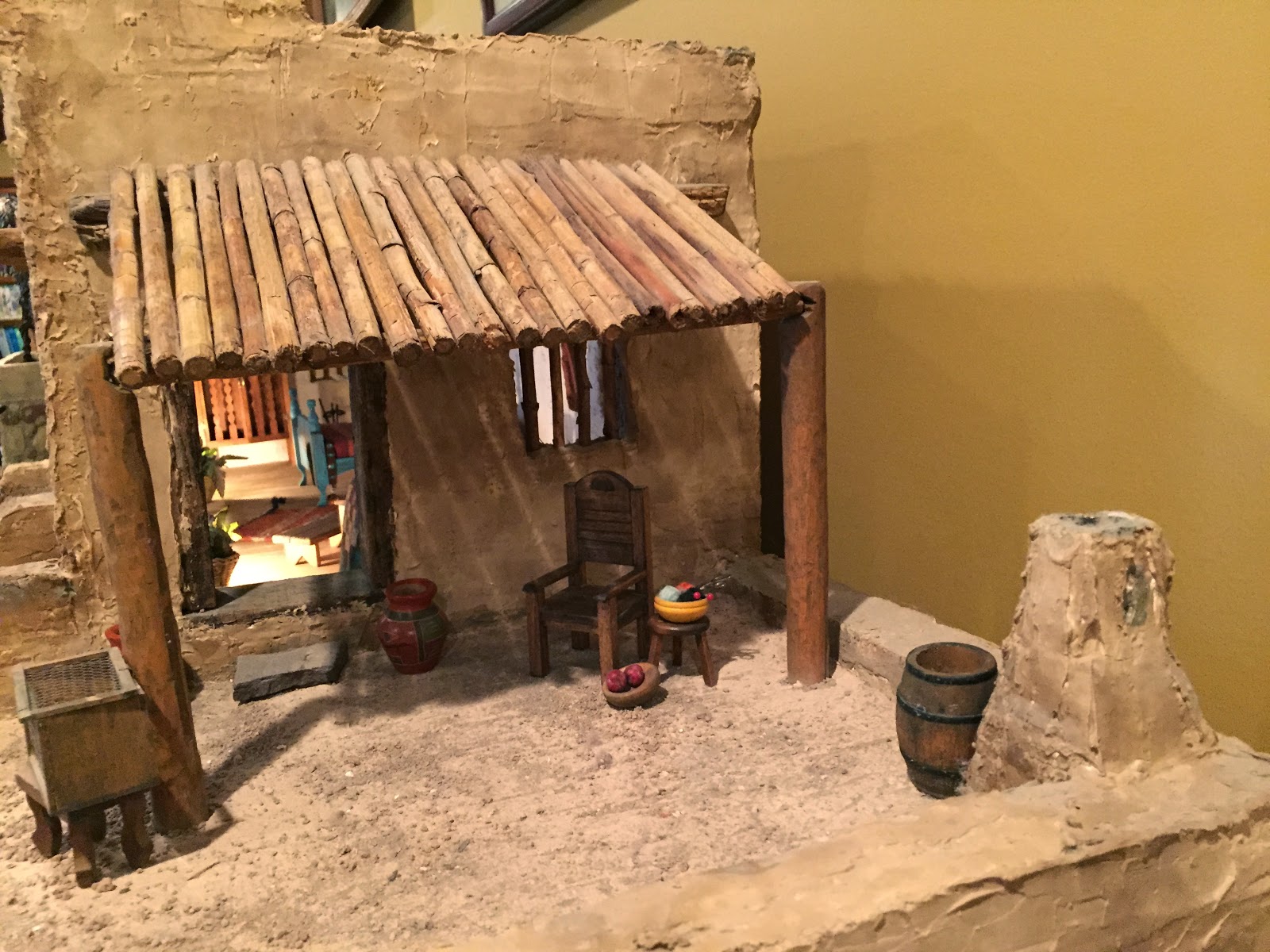 Now let's walk out of the bedroom door into the upper courtyard, where Ana Luisa sometimes sits in the shade with her sewing. 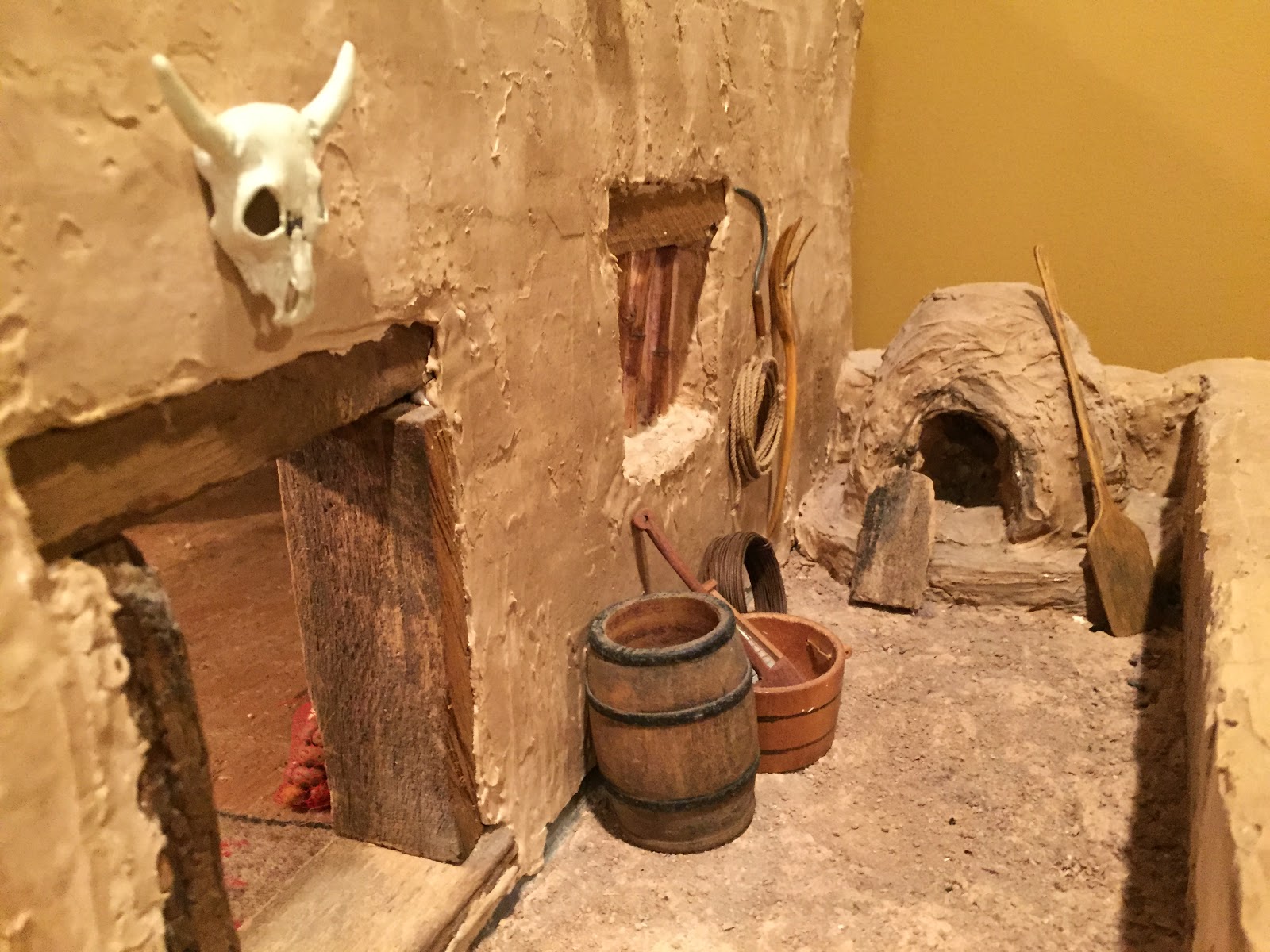 Now we're back downstairs and have just walked out of the kitchen door and turned to the left. There is a rain barrel there, positioned underneath the canale so that Ana Luisa can have soft rain water for the washing. She also has quick access to the horno in case the bread is burning. 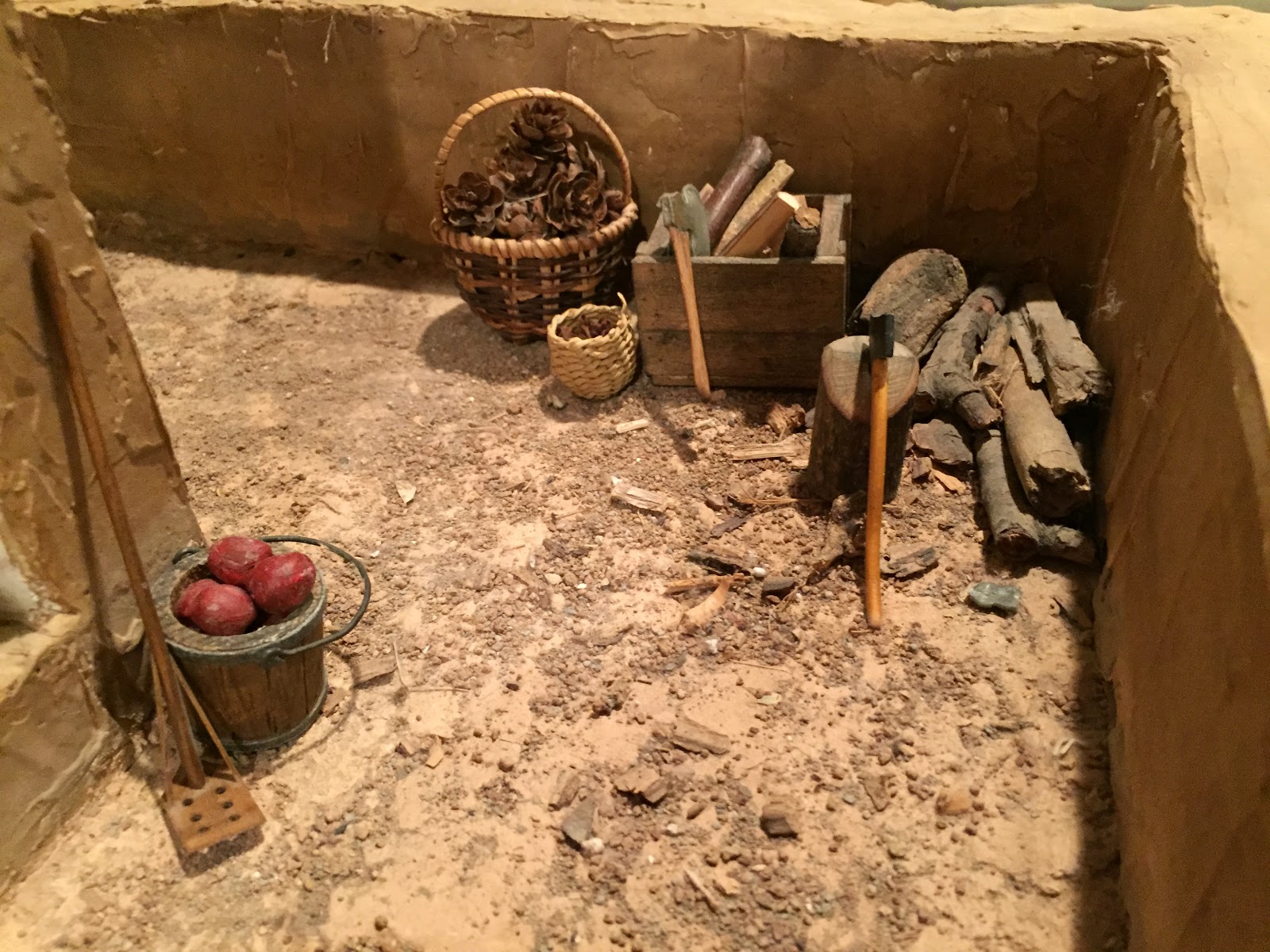 But if we turn right from the kitchen door, we find the wood pile with chopping block and axes. Joseph prefers to cut the wood for cooking and heating, but Ana Luisa is strong and very handy with the axe if  she needs extra fuel. The apple butter paddle and a bucket of apples wait for her attention - one more chore to finish. 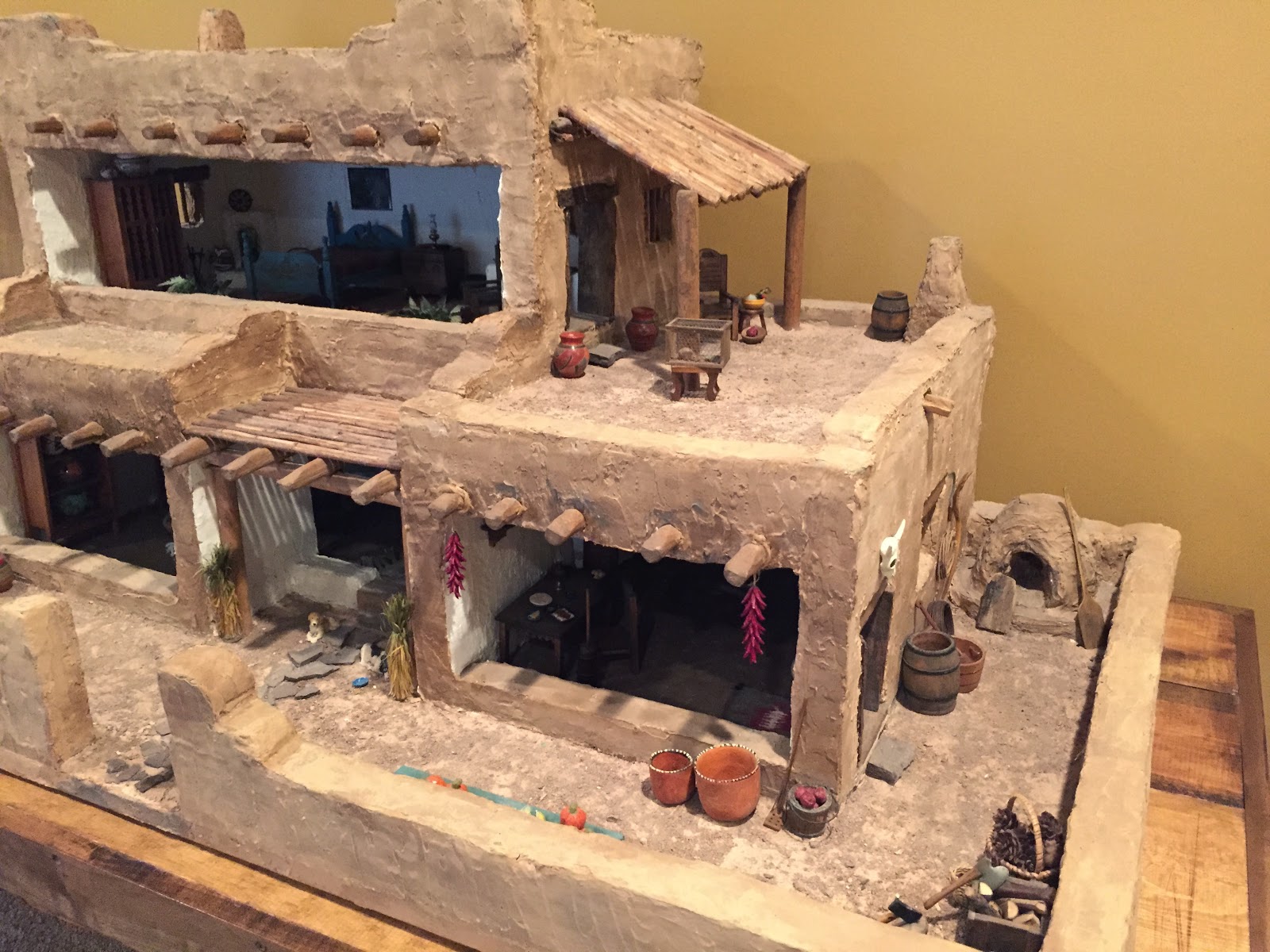 As we leave the adobe house, we look back at the ristras (strings of red chiles) that hang from the vigas on the kitchen wall. Honey and Martin are very lazy today - they've hardly moved since we arrived. 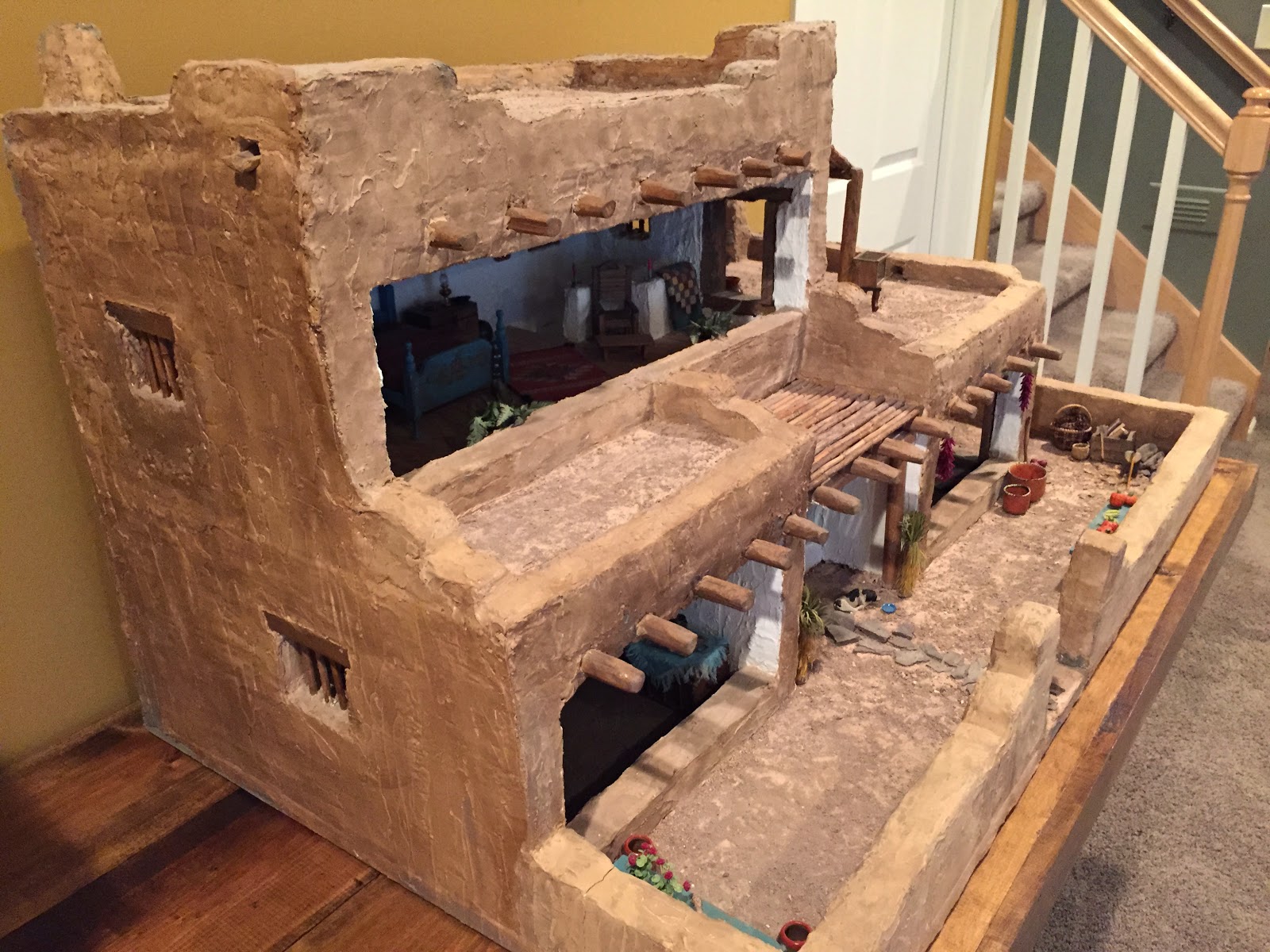 Let's take one last look at Joseph and Ana Luisa Cantrell's adobe home. May they have many happy, busy years being part of my Adobe Dream.

I hope you've enjoyed the tour of my adobe house. I know that I said that this would be the finale of the "adobe experience," but then I remembered that I had also planned to share one of the most troublesome aspects of building the adobe house: pouring the earthen floor. And what a mess that was! So now there's ONE MORE adobe post to come. Please stay tuned for the next episode, in which I reveal my shortcomings in the realm of mud.