After much research and much measuring and remeasuring, I decided that my French Farmhouse would be a "high house," partly because I liked the idea of an exterior staircase leading from the lower-level barn and storage areas to the living quarters above, and partly because the limited space that I had didn't really leave room for any other style. I also needed to have space for the dovecote at one end of the house and some room in the farmyard for a bake oven, a well, and a chicken coop. What I mostly needed, of course, was a larger "real" house with a bigger work room and wider doorways. But I had to "make do," - so I did it by building the high house.

The French Farmhouse, like my Victorian and adobe houses, is dated ca. 1853 (its current fictitious date) but it was originally built in 1713 by the present owner's ancestor and has remained in the same family for all of those 140 years. You will meet the various occupants of the farmhouse at a later date.

Below are some of my evolving preliminary sketches and floor plans for the farmhouse. I continued to improvise and make changes as the house took shape, but at least I had usable guidelines to follow. As usual, I had a hard time with the "construction math;" I had to constantly remind myself that the styrofoam is one and a half inches thick. That changes the house dimensions a whole lot. 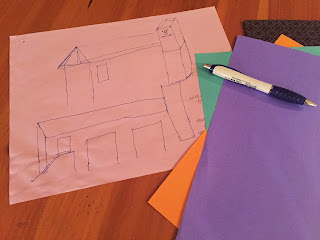 First rough sketch. (Actually, all my sketches are rough; that's as good as I get!) 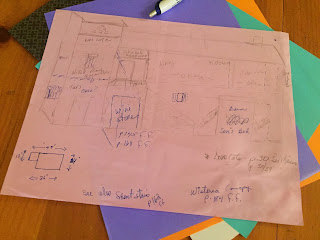 Getting a bit more complex - down to details. 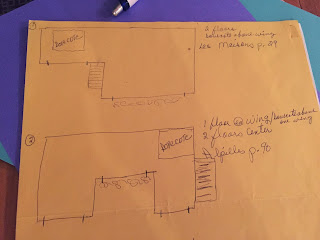 Struggles with the staircase. Here? 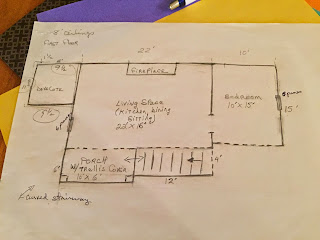 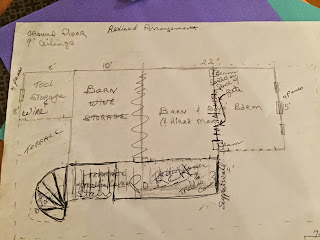 Or maybe like this; and I'll change a few other things as well. 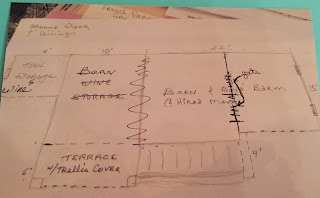 Or maybe better this way after all? Did I have to use non-erasable ink for this? 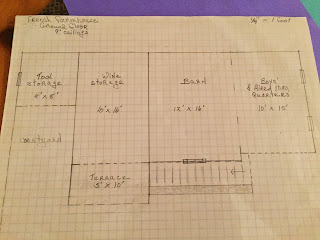 Okay, time to firm up these plans and get them down on graph paper. This is the plan for the lower level, consisting of boy's room, barn, and wine store. And the staircase starts here. Going up. 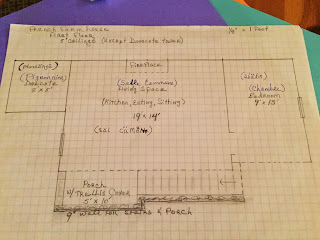 And this is the upper-level plan, consisting of the main room and the girl's room, the porch, the down staircase, and the dovecote off to one side. (I changed the location of the staircase again later.) 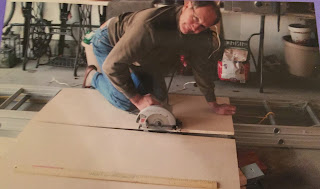 I bought a 4' by 4' piece of fiberboard, which is very heavy; but I had to be sure that the base was strong enough to support the house, which I knew would be heavy because of all the tiles on the roof.  Robert, my husband, cut it down to my desired 4' by 28" measurement. He had a tough time of it! He had only one sawhorse; do not ask me why. He had no workbench, so he had to use a ladder laid flat on the garage floor. The safety button on his power saw was broken off, so he had to push the button down with a screwdriver at the same time as running the saw. YIKES! This is a man, by the way, who was a military career pilot; he flew fighter jets and air-refueling tankers for 30 years. So maybe because of that precision training (or possibly not) the base board that he cut turned out perfectly straight! 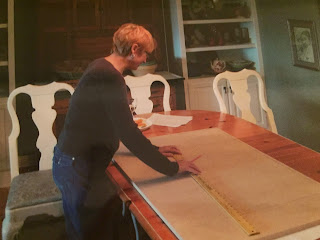 I drew the floor plans onto the base board…….. 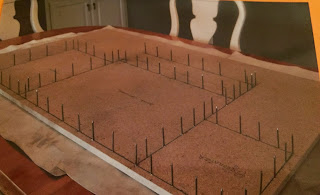 ……..and drilled holes along the wall lines, then hammered in nails (a little larger than the drilled holes) from the bottom side so that the points projected upward, providing anchors for the styrofoam walls. I aligned the rows of nails with a small hammer to be sure they were all straight up.

I also spent some time at this point, when I was scrawling the names of the designated rooms onto the board, in practicing the proper pronunciation of the French words: chambre (bedroom); salle commune (main room); pigeonnier (dovecote) - all to no avail. For "commune" I tried to pucker my lips in the English "U" sound, and while holding my lips immobile in that position, pronounce a long "E" sound. I felt like Eliza Doolittle. 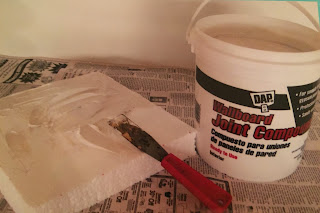 I cut the wall pieces from styrofoam, and it was time to start applying the wallboard joint compound so that I could form stones on the walls. 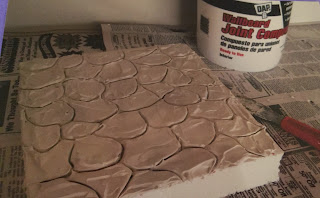 I got the idea for making the stones from a New England Miniatures blog tutorial on creating stone floors, but the method worked beautifully for the walls - and I later used the same method for making flagstone floors. I first drew the outline for the stones and let the joint compound set up a bit. 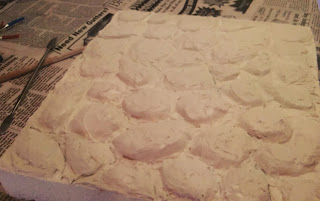 Then, using a tiny putty knife, I shaped rounded stones in the joint compound and let it dry for about 24 hours. 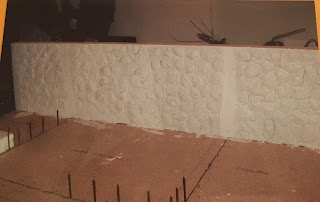 The shaped stones have been formed on the lower-level back wall. I have left blank spaces where the inner partition walls will fit against the back wall. 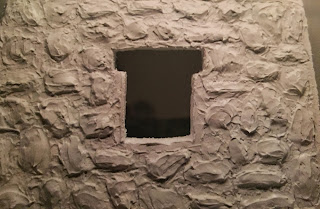 Stones have been formed on the end wall of the lower level barn. 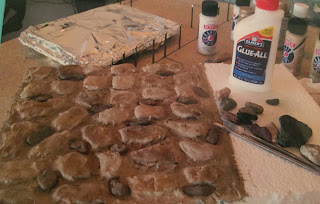 I have begun painting the stones and "mortar" on the walls. 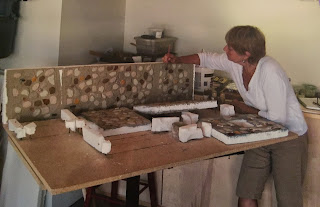 I also embedded a few "real" stones randomly in the walls by adding a dab of joint compound to each small stone and pressing it into place. I had debated whether to use all real stones for the lower level walls, but I thought that would add too much weight to the farmhouse; it does need to be portable, or at least movable. So using the easily molded, easily sanded, and easily painted joint compound seemed the best solution. 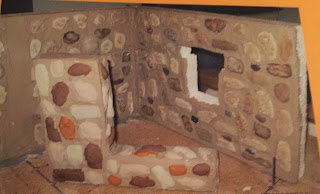 The painting continues on some of the partition walls in the barn. 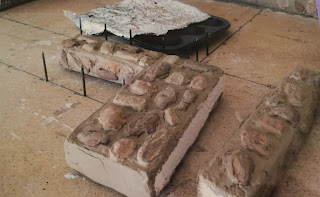 I used so many different mixes of paints for the stones that I eventually lost track of my "palette" and just improvised every time I needed more paint. 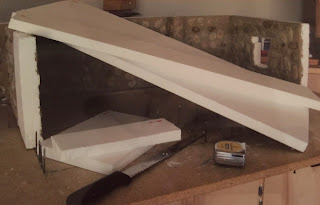 The ceiling pieces have been cut…… 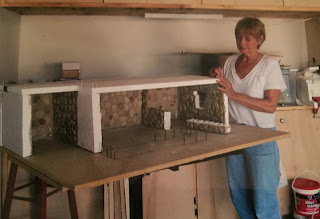 ……..and tried on for fit. And the ceiling fits! 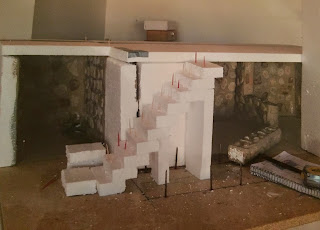 While the ceiling piece was temporarily in place, I decided to experiment with the exterior staircase, which leads up to the second-level porch. (My French/English dictionary didn't have a word for "porch.") 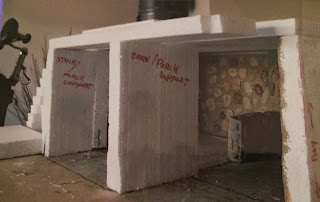 With the ceiling and stairs in place (for the moment) I also cut and tried out the support walls for the porch and staircase. So far, so good. 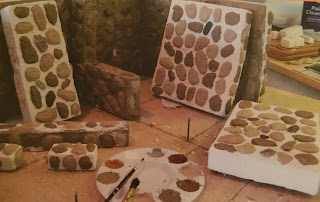 More walls; more stones. Will I ever be finished with these stones? Ever? 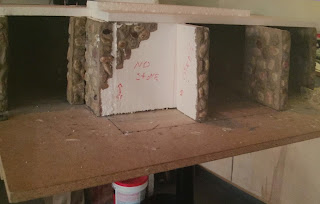 The interior and support walls have been mounted and secured. (With toothpicks and glue, as usual.) 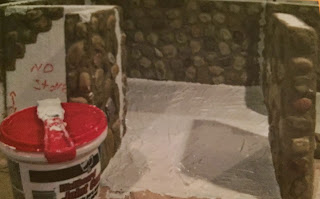 And it was time to spread the "earthen" floor in the barn. If you happened to read my previous "Adobe Dreams" posts, you may remember the nightmare of a mess that I made of the adobe's earthen floor. I learned from that experience; for the French Farmhouse, I just used more joint compound, and voila! Instant earthen floor! 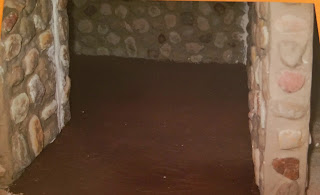 This was the first coat of paint that I used for the barn's earthen floor; the second coat was a little lighter. 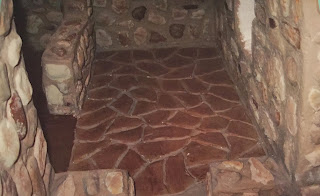 I used the faux-stone method from the New England Miniatures blog to create the flagstone floors in the wine store and in this room at the end of the barn. This will be the son's room, separated from the main barn space by the low partition wall that you see on the left of the photo.

I hope you'll join me next week as the sticks and stones and styrofoam saga continues. The next post will be more about sticks than stones. We've seen enough of those for a while.