It's my sincere hope that this blogpost will not bore anyone to the brink of tears. And if it does bring you to the brink of tears, my other sincere hope is that you'll keep reading it anyway; these walls had to be stuccoed, sanded, and raised at whatever cost. Of course, I was not at all bored during the process, but I admit that I did ask myself more than once during the many days of sanding, "which lasts longer, forever or eternity?" 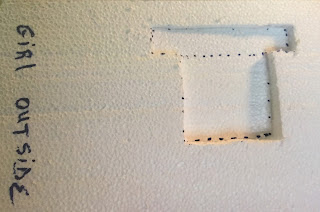 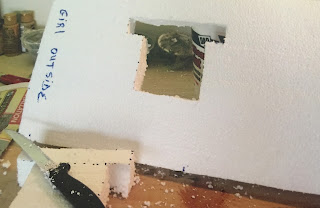 The photos above show the end wall where the girl's room is located. I cut out the window opening, with a space at the top for the wood support beam. For small cuts like this one, I've found that a serrated steak knife cuts through the styrofoam easily and allows me good control. (And it takes a lot of control to cut as crookedly as I do.) 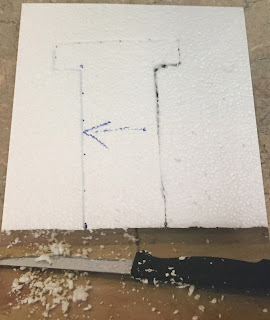 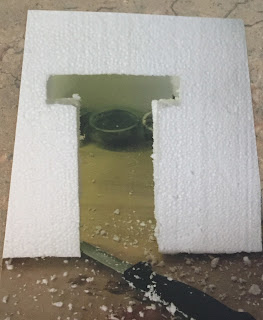 These two photos show the door that opens between the main room (salle commune) and the bedroom (chambre.) Still working on the proper French words. 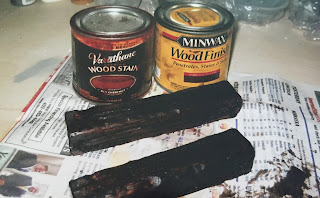 The support beams for the window and door were made from balsa wood that I cut, aged, and stained. 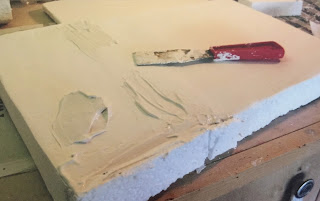 I stuccoed all the walls with joint compound after the cutting was finished. 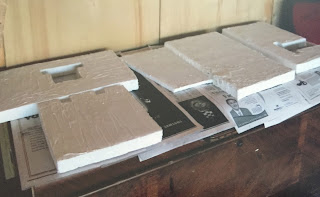 All the upper-level walls have been stuccoed. 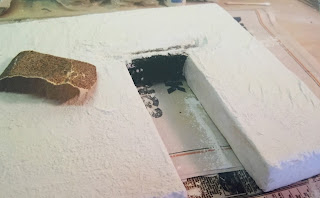 Let the sanding begin! Sanding - sanding - sanding - and more sanding. This was the point at which I questioned whether eternity lasts forever, or whether forever lasts an eternity! I decided that they're equal; they both last for a long, long time! 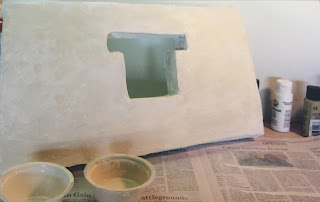 After the sanding was at long last finished, I applied a color wash to the walls, using first a wash of Desert Sand and white paint combined, followed by a second wash of white with just a tinge of Desert Sand. 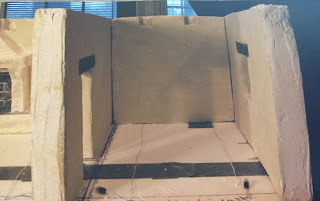 The outer and interior walls for the girl's room have been erected and secured (with the usual toothpicks and glue) and the support beams for the window and door were put in place, using joint compound lathered liberally within the notched spaces. The strips of duct tape that run across the rooms was put in place to cover the seams where I joined two pieces of styrofoam to make the ceiling for the lower level, which is the floor of the upper level. You may notice the electrical wiring that runs from back to front of the rooms, which I later covered in duct tape as well, in preparation for installing the flooring material in the two rooms. 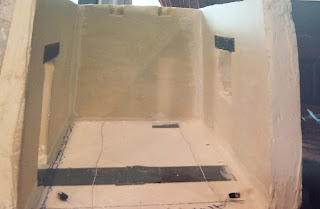 The gaps at the wall corners and along the base of the walls have been filled in with joint compound. 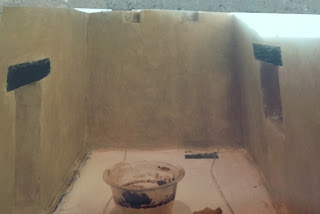 And then it was necessary to retouch the color wash on the repaired areas. 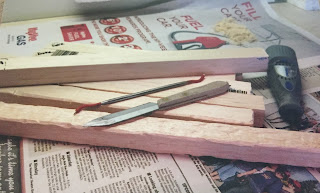 I began to cut and hand-hew the wood beams for the upper-level ceiling. 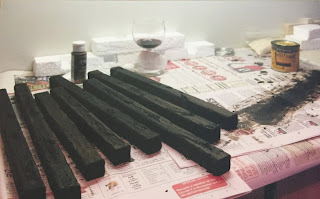 I finished aging the ceiling beams and applied the first coat of stain - a very dark walnut stain. The second coat of stain was a lighter maple color. 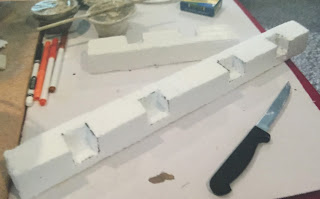 The pieces for the top front of the upper-level room openings have been cut and notched. The wood beams will fit into the notches. 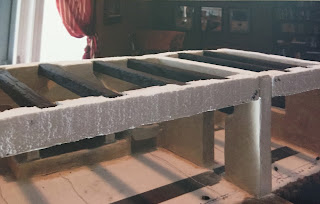 I temporarily installed the upper front notched pieces in the two room openings and tried all the ceiling beams for fit. And I was very relieved to have a good fit! 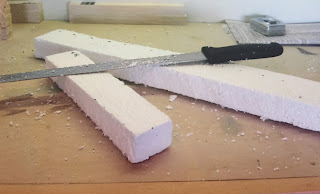 Next I had to cut the styrofoam pieces for the low "walls" at the bottom front of the room openings.  The low walls imply the presence of "real" solid walls. The long serrated bread knife is my favorite cutting tool for larger pieces of styrofoam. (No, it doesn't cut straighter; it just cuts bigger.) 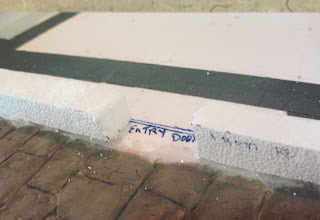 I secured the low walls in place on either side of the front doorway and at the opening of the girl's room. 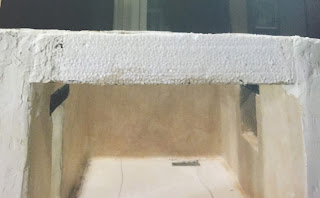 The upper notched pieces were secured permanently as well. 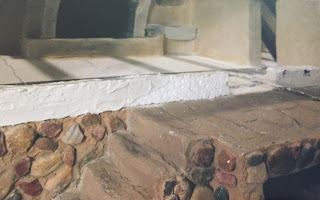 I began to stucco the lower and upper "partial" wall pieces. 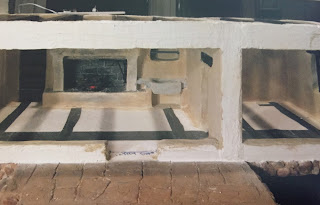 Which, of course, only led to the necessity for more sanding! Oh, No!

If you managed to read this post through to the end (to the END!) you have my most sincere appreciation and admiration, and I hope you'll return next week for a post that describes the construction of one of my favorite features of the French Farmhouse - the pigeonnier. And I'm happy to tell you that it has only four walls that are mostly finished!