The French Farmhouse: This Place Is for the Birds!

I had done much research on dovecotes in the Provence region of France. I settled on a one-slope roof, with a south slope to provide shelter against the prevailing north wind. Even the smallest farms, of which mine is one, housed a few pigeons that provided food as well as rich fertilizer for crops. The lower level of my dovecote is a storeroom for wine because of the consistently cool temperature in the stone structure. The pigeons occupy the upper level. 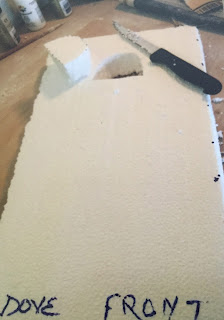 I had previously cut all the necessary wall pieces for the dovecote, so it was time to add the details. I cut an opening in the front wall for the pigeonhole entrance. 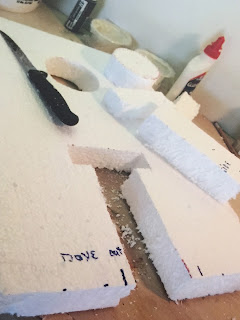 In the side wall of the dovecote, I cut a round window and a door. 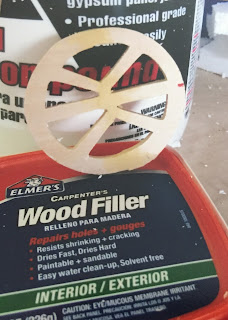 I took a shortcut in making the window frame by cutting the semi-circular tops off two commercial windows and gluing the two pieces together, filling in with wood filler where necessary. The small round window (jour) is traditionally used to provide light and ventilation for stairwells, lofts, or cellars, but probably not for dovecotes. But since the dovecote is enclosed on all sides, unlike the other rooms in the farmhouse that are open in front, I needed to provide some means of viewing the interior. 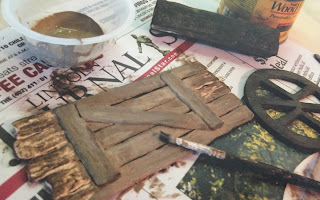 I cut the pieces for the dovecote side door and lintel from balsa wood, then assembled and stained the door as well as the lintel and the window frame. 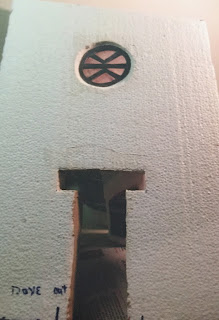 The window frame has been installed in the round opening. 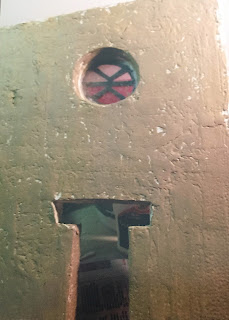 I painted a rough finish on the interior of the side wall and installed a piece of plexiglass in the window frame - and hoped that I would remember to clean the plexiglass before I sealed up the room permanently! I wanted the window to be clean enough to see through to the interior, but not so clean as to be unrealistic. (I'm pretty sure that pigeons don't do windows.) This interior wall, by the way, will never be seen, because neither the window nor the door provides a view of it. 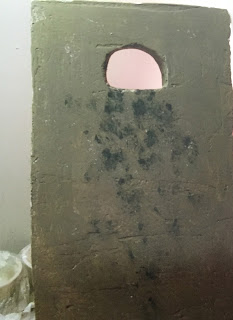 I added some smudged pigeon droppings to the front wall for a bit of creative realism. (No, I am not saying how realistic the droppings may be!) 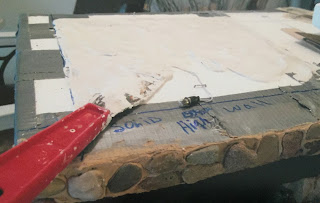 The dovecote floor got a coat of stucco. I marked off the space carefully so that the walls would rest clear of the floor. 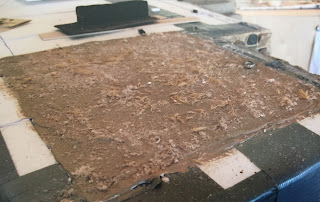 I painted the dovecote floor, applied a glue wash, and covered the glue with straw and pigeon droppings. 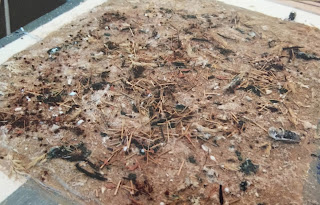 A second application of glue on the floor, more debris, and a "patting down" finished it up. 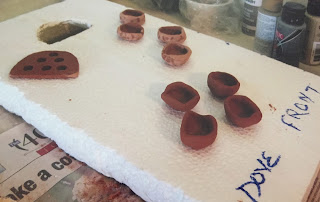 I made eight terra cotta nesting boxes from Sculpey clay. Terra cotta pots and nesting baskets were traditional choices for the provincial dovecotes. My pots were very roughly made. (That realism thing again.) I also made the pigeonhole entrance piece for the front wall of the dovecote. The nesting pots in the photo background have been sanded and aged a bit. 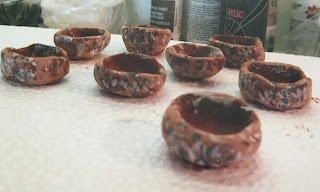 I added some pigeon droppings to the nesting pots as well.

This photo shows some of the bits of shredded bark, dried grass, etc. that I gathered and crumbled for nesting material inside the pots. 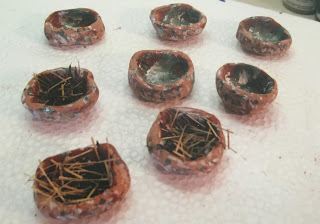 I completed eight nesting pots and placed nesting material inside three of them. By local law, my farmer (what is his name?) is allowed one pigeon for every acre of tilled ground, and he owns ten acres,  but of course does not grow crops on all of his land. So I estimated the number of his pigeons and provided nesting pots for eight. But the remaining five pigeons will have to provide their own nesting material. I've done enough for them. 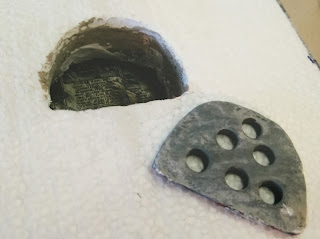 I applied various colors of paint to the pigeon entrance piece to simulate stone. This photo shows the finished piece. 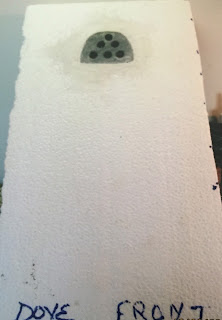 I fit and glued the pigeonhole entrance into its opening in the front wall of the dovecote. There were some gaps that I patched with joint compound for a smoother finish. 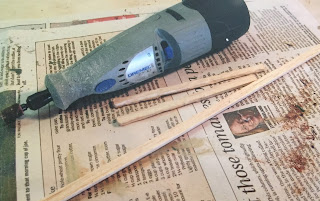 Balsa wood strips were used to make roosts for the pigeons. 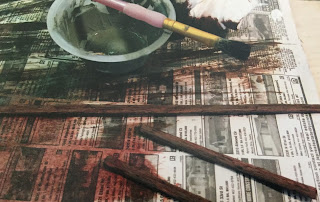 My Dremel aged the wood, and I stained it. 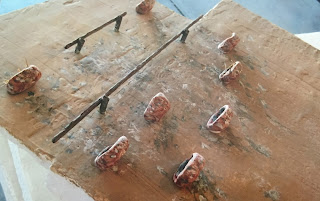 I mounted the roosts on the interior wall opposite the window and door. The nesting pots have been glued to the wall, and I added a bit more "realism." (Nasty stuff, that realism!)

I made a valiant effort to form three pigeons from Sculpey for the nesting pots. This is my only "before painting" photo - and it turned out so blurry. Bummer! 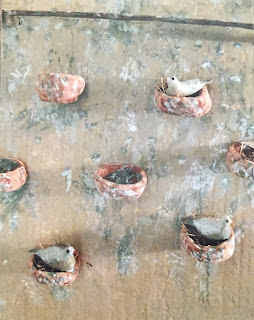 The three painted pigeons have been glued into the nesting pots. Their eyes are open, so maybe they're laying eggs before sleep. 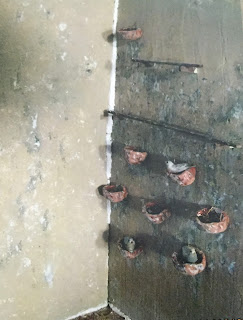 A wider view of the nesting pots and pigeons. The corners and the base of the floor have been repaired with joint compound after the installation of the walls. 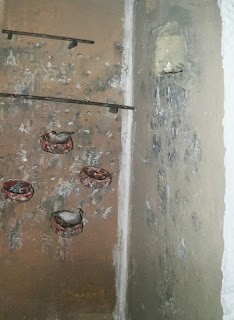 A view of both the front entrance wall and the "roosting/nesting" wall. The repairs to the corners were  completed and were ready for the paint to be touched up. 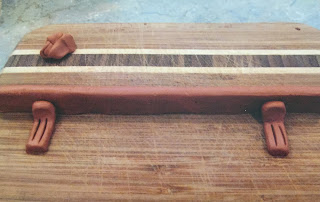 I made a "stone" landing ledge for the dovecote exterior entrance wall from Sculpey. 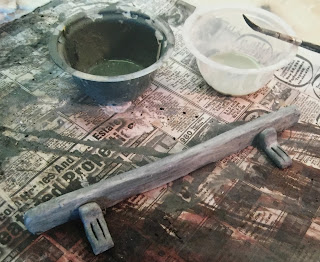 Layers of paint have been applied to the landing ledge. I used mostly combinations of gray and white to simulate stone. 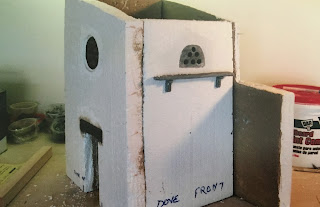 This was a "trial run" to check for fit of the walls before permanent installation. I was not a bit surprised to find that the structure definitely listed to leeward; but it didn't list as far as it looks in this photo! This is why wonderful, forgiving styrofoam is my choice of building material. 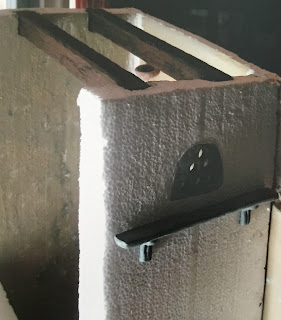 All trimmed up - the landing ledge and ceiling beams were temporarily installed. And it all fit! 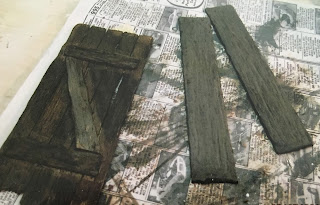 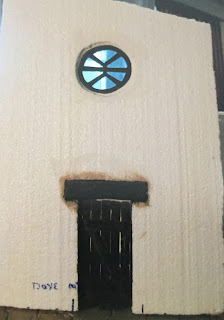 The door and door frame have been installed on the side wall of the dovecote. 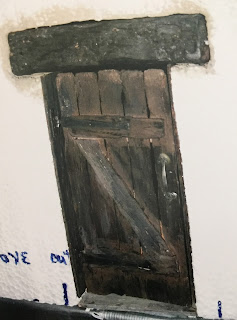 The door, frame, and doorsill were put in place on the side wall. (This whole thing seems to be hanging crooked. I blame, as usual, my lack of photographic, rather than construction, skill.) Note the strap hinges that I finally found online after much searching! (Look closely.) I made a wooden latch for the door later; it will be shown in the "finished" photos of the dovecote.

So I bring this blogpost to its conclusion, although I'm sorry to have to leave the dovecote in its  incomplete state. Now it's time for me to wait patiently for that "proper and fitting" time frame that I mentioned at the beginning of this post. I'll inch closer to that goal next week when I lay 1100 terra cotta floor tiles. All in one blogpost!