Last week's post was all about stones and stones and more stones, so this week I'm changing to sticks and sticks and more sticks. Just for a little variety. As you may remember from a previous post, this farmhouse is a "high house," which just means that the family living quarters were built above the barn and stables.

One end of the barn is designated as the boy's room, because in the mid-nineteenth century, my chosen time period, a young boy of an age to perform chores would not have had a sleeping place within the main house. He (or a hired man if there was no able-bodied son) would have had his sleeping quarters in the barn or stable.

I designed the boy's room to be partially open to the barn, separated by a low wall and a wooden gate, so that he can keep watch over the family's two milk cows. He also has a window that overlooks the chicken run, so he must be vigilant on both sides. I'm surprised that he gets any sleep, but he's fourteen years old; that explains a lot. Teenagers were ever thus.

So - the boy's room stone walls, including the low one, were ready; it was time to construct the gate. 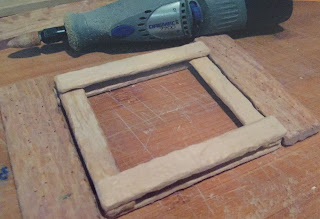 I used balsa wood pieces for the gate. It took some trial and error, because I had never paid much attention to the construction details of a wooden gate. Mostly I had only heedlessly opened or closed one without due diligence. If only we could know in advance what we're supposed to observe closely! 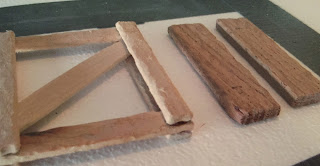 The gate construction has been completed - ready to be stained. The wider end pieces in the photo will be attached flat against the stone walls, and the gate will be attached to these two support pieces. 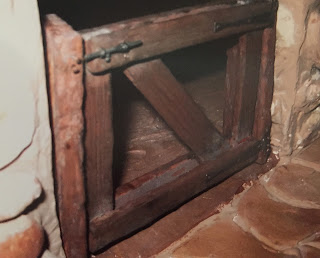 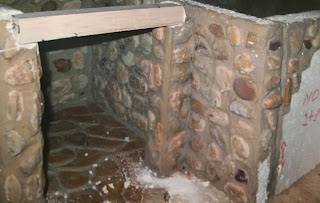 Now - moving on to some bigger sticks - it was time to make the "hand hewn" beams for the lower-level ceiling. But just as I was all set to start the hewing, I was sidetracked by a disconcerting discovery. OH NO! I forgot to leave notches in the stone walls for the lintel beams at the three doorways! I had to belatedly cut the notches. Demolition is a messy job - and it broke my heart to see those precious pieces of "stone" chiseled away. My just desserts for a careless oversight. 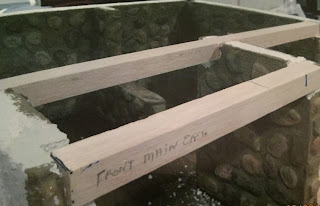 But I did discover that the "fake" stone is hard as a rock! 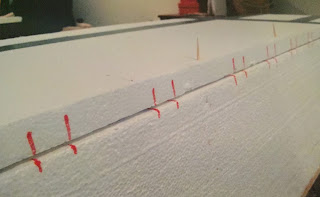 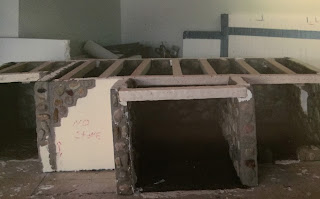 I tried all the ceiling beams for fit before beginning the aging and staining process. 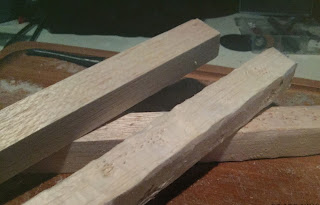 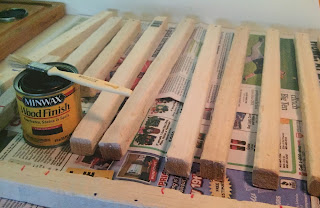 All the ceiling beams have been distressed and are ready to stain. 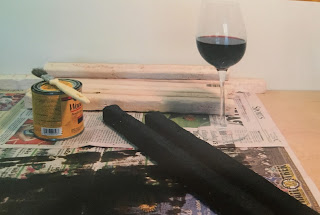 The first application of stain has been completed on the first two beams. I used a dark walnut stain for the first coat, then added a second coat of chestnut red. In some areas I also dabbed on gray or black stencil paints for more color variation. Since the above beams were for the wine store ceiling, I thought it appropriate to add a glass of French wine to the process. 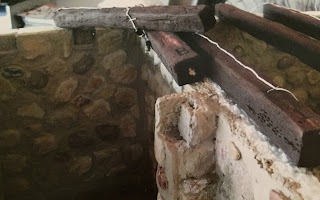 The aging of the ceiling beams has been completed, and the electric wiring for the interior display lighting was finished as well. Since the "current" time period for the farmhouse is 1853, there would have been no actual electric lights; but the display lighting is necessary, as it was for my previous adobe house. 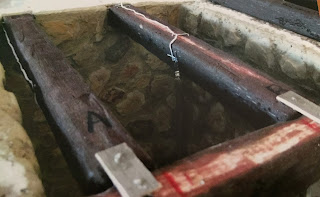 I had to improvise a method to attach the ceiling beams to the front lintel beam where there was no notch. I cut one-inch lengths of balsa wood and attached them to the beams and the lintel by using tiny nails and glue. The nails were pressed into the soft balsa wood easily by hand, without needing to resort to hammer blows. 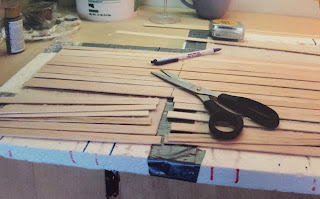 I measured and cut many strips of balsa wood that I used for the barn ceiling above the beams. 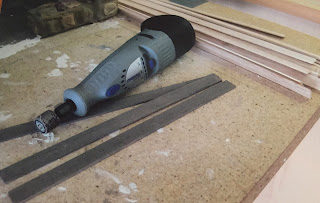 After "beating up" the ceiling boards a bit, I began to stain and paint them. I painted each board first with a "Mushroom" wash, then I applied a final gray wash. 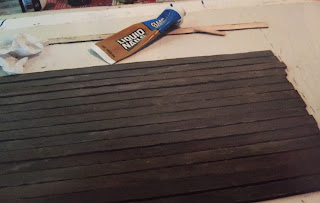 The boards were ready to glue into place on the styrofoam ceiling piece. The boards in the photo look much darker than they actually turned out. The photo below shows a more accurate finish. 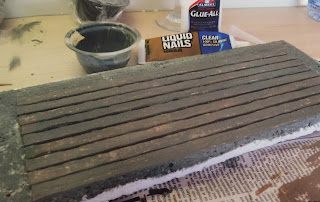 I first double-checked the correct placement of the wood pieces by placing the styrofoam ceiling piece on the tops of the walls and marking the inside edges. (That tricky inch and a half again!) The ceiling piece was a good fit; ready for Liquid Nails. I applied the adhesive to each board and pressed it into place on the styrofoam ceiling piece. One board at a time. One by one by one by one. I was feeling verrrrry woozy by the time I finished. (I did not drink any wine!) 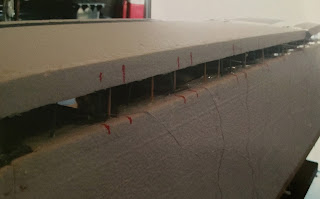 Time to attach the barn ceiling to the walls - which I did using toothpicks, glue, and duct tape. 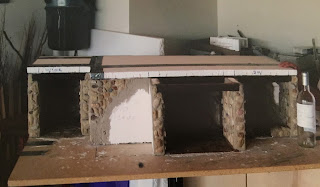 And at 4 p.m. on July 14 - Bastille Day! - the ceiling was permanently secured in place. 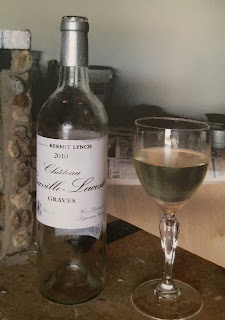 So a celebratory glass of French wine was definitely in order.