The French Farmhouse: Cooped Up

When the time came to build a chicken coop for the French farmhouse, I finally admitted what I had known all along but wouldn't admit: There is only just barely enough space here for a chicken coop. It's a good thing that these four hens and a rooster are free range chickens, because there definitely wasn't space for a good chicken run. It's also a good thing that these are miniature chickens; I did manage to crowd them into a corner of the farmyard just outside the boy's window. So far, the crowded conditions haven't affected the hens' egg-laying abilities. 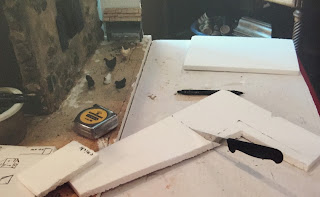 I started cutting the styrofoam pieces that would be used to make the chicken coop. Note the covered nesting box in the back, which I uncovered when I decided to put a roof on the coop. 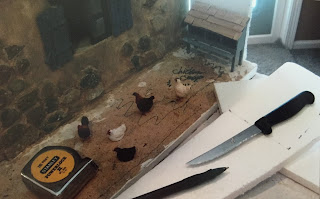 Here is a slightly larger view of the nesting box before I modified it. I found the chickens online at SP Miniatures. 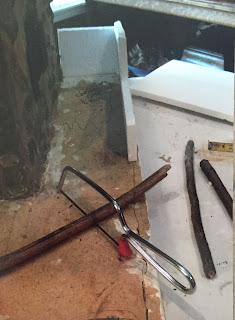 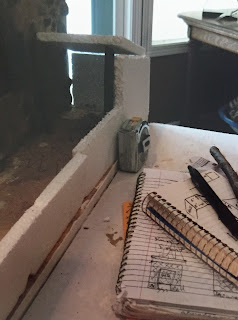 I tried the various styrofoam pieces for fit. 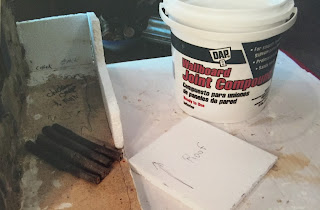 I put up the back and side walls of the chicken coop by driving small nails into the particle board base along the wall lines; then I applied glue to the nails and placed the styrofoam pieces over the nails. 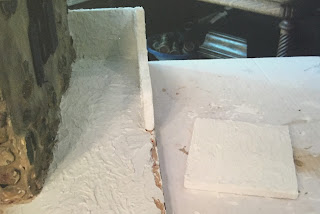 A layer of joint compound has been applied to the interior walls, the floor, and the ceiling piece. 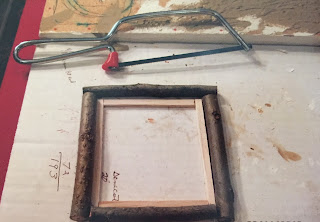 I cut balsa wood pieces for the gate frame and checked the pieces for a proper fit inside the entrance posts. 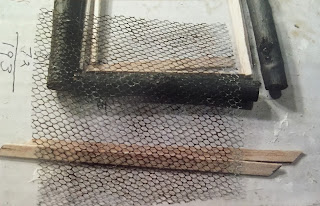 This piece of chicken wire helped to determine the current age of the French farmhouse. I had planned an 1850 vintage, the same as my adobe house. But before I started the farmhouse construction, I did some research to make sure that chicken wire had been invented by 1850 and learned that it was invented in America in 1853. By pulling strings and calling in favors, I just managed to get a shipment of chicken wire out of New York City and into the south of France that same year. Hard work! Then I found that chicken wire was also invented in England in 1844, so I could have saved myself all that trouble. But also, as it happens, chicken wire may well have been invented by the ancient Egyptians 4000 years ago. I realized that the farmhouse could be of any vintage, and the chicken wire would still be bonafide. I stayed with 1853 as the current setting for the farmhouse, but since the house was originally built in 1713, who knows how old the chicken wire might be?

I used nylon netting for the chicken wire. I stiffened it by dipping it into a glue and water mixture and  drying it. But the netting wasn't quite stiff enough, so I ironed on spray starch. That was better. Finally, I sprayed several coats of silver paint on both sides of the netting, drying between coats. I finished the chicken wire by dabbing on paint with a mostly dry sponge. I alternated using dark gray, brown, and rust colored paints to make the netting look old and worn. (I'm not sure that it looks 4000 years old, but I think it's close enough.) 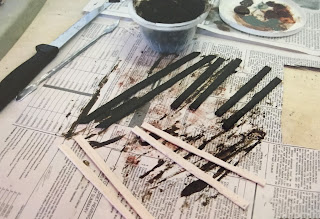 I stained the pieces of balsa wood for the gate. The chicken wire was sandwiched between two pieces of wood on four sides and two pieces that fit diagonally across the gate. (I failed to take a photo of the completed gate before I mounted it in the entrance frame.) 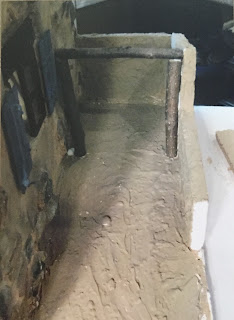 I painted the stuccoed interior walls, floor, and ceiling and glued the entrance posts in place. 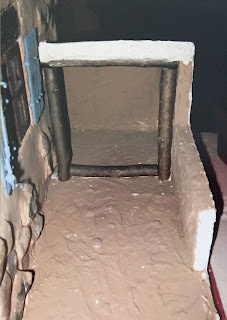 The chicken coop roof has been secured, and the lower crosspiece was added to the entrance frame. 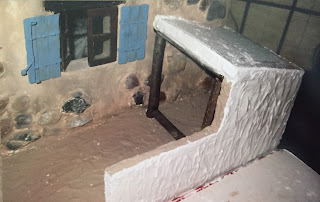 I stuccoed the exterior walls and around the edges of the roof. 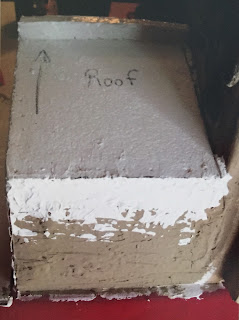 I built a parapet across the front of the roof to provide a barrier for the roof tiles. 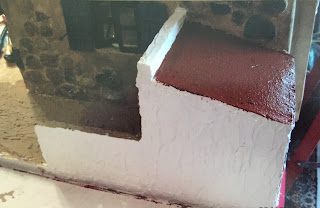 Next I painted the chicken coop roof with a terra cotta paint so that no white would show beneath the clay tiles. 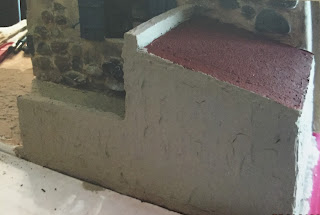 The exterior walls and the roof parapet have been painted with a tan base coat. 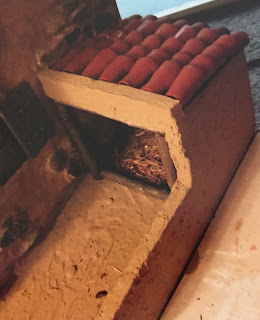 I laid 65 clay canal tiles on the roof and scattered wood chips and "straw" on the chicken coop floor.
I had gathered some wild grasses while we were at our Sandhills home the previous year. The very thin, wispy grass made great simulated straw. But when it came time to use it, I searched high and low and could not find it! Finally, in the last possible place left in which to look, I found the grass. It was in a closet under the basement stairs - a very logical place, since that's where I keep my bags of landscaping materials. This was not an organizational problem, but a definite memory problem. 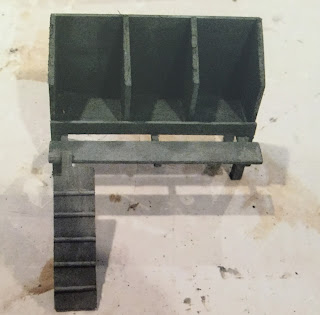 I removed the original shingled roof from the nesting box and painted it to look older. (But not 4000 years old!.) 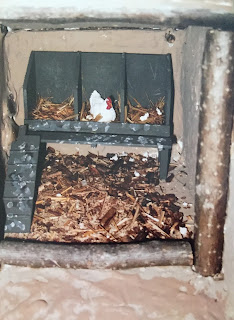 I painted chicken droppings on the roost and ladder, glued the ladder to the roost, and built three nests for the hens. The hole that you may notice in the upper right hand corner was destined to have a lightbulb installed - an afterthought when I realized that the chicken coop was very dark inside; even the white hen was hardly visible. 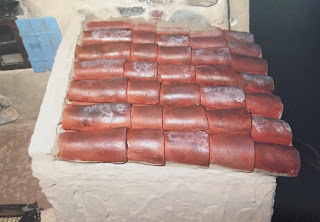 I began the aging of the roof tiles on the chicken coop. 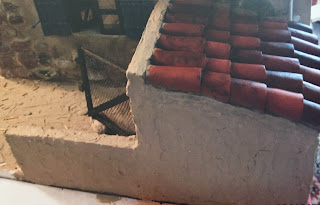 I finished aging the tile roof and rubbed soot on the exterior walls to age them as well. Then I glued the gate in place, partially open, so that the chickens have the freedom to go in and out during the daytime. I did not put hinges on the gate, although they appear to be there. I reminded myself that I won't need to actually close the chicken coop gate at night. After all, what predator wants to eat a fake chicken?! 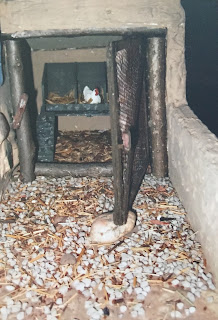 The latch board has been glued to an upright post, ready to slip into the slot attached to the gate. I added gravel, wood chips, and straw to the chicken run. And after I found a nice-looking rock to use
for a gate prop, the chicken coop was FINISHED!

The chickens have settled in happily, and their egg production meets the household needs, so all is well. Speaking of wells, next week's agenda includes a Balancing Well for the busy, crowded farmyard. Come take a look!