All of the pieces necessary to the daily working of the farmhouse were in place in the farmyard: the chicken coop, the well, and the oven. The only major construction task remaining was a wall to define the farmyard boundary and to provide a tidier, more finished appearance to the farmhouse. 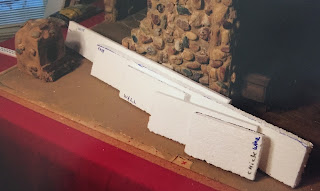 I started the wall project by measuring and cutting the styrofoam pieces that I needed. 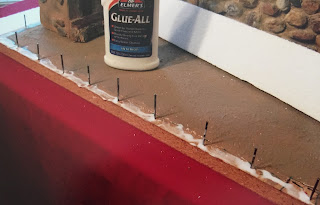 I hammered small nails around the edges of the base board and applied glue to the nails and to the edge where the wall would be erected. 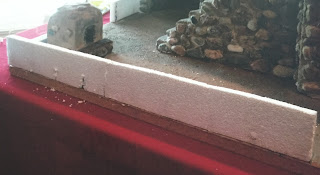 I mounted the long west front wall and the short west end wall by the wine store by pushing the styrofoam pieces down onto the nails; I pressed on the pieces gently to be sure that the wall was securely in place along the board. 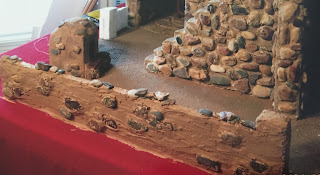 I cut the pieces for the simple gate posts and attached them to the west walls before applying joint compound to the wall sections. Stones were embedded randomly to the sides and top of the walls. 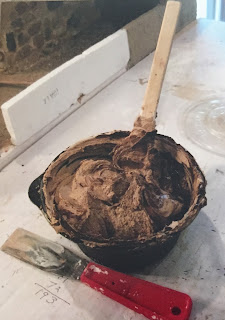 The east end wall that connects to the chicken coop has been partially installed. I ran out of the colored joint compound that I had used on the west section of the wall and had to mix up a new batch. Always tricky. I kept a record of the colors that I used, but not the exact amounts, so each new mixture entailed much trial and many errors. The paint mixture in the above photo includes Golden Brown, Khaki Tan, and Traditional Burnt Umber. When the new batch dried, it turned out to be a bit darker than the original, which meant more mixing and matching had to be done. 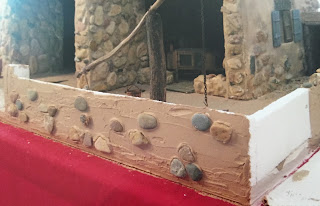 I erected the east end and east front walls, added on the gate post, and repeated the stucco and stone process. 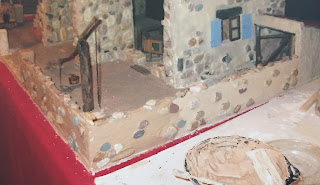 The wall was up all around the farmyard boundary. I placed more stones randomly along the top of the wall. The stones for the top of the east wall were individually selected by my granddaughter, Sophia, from the "stone collection" basket. (The basket she had helped fill in the first place.) Sophia had suffered a mild concussion the day before when she fell from the jungle gym at school, so she had a day off to spend with me. I don't think I made her work too hard; besides, I paid her four quarters for her labor. 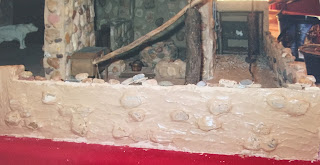 After all my concern about color matching for the wall stucco, the stucco had so many cracks when it dried that I had to thin down the remaining mixture to create a "slip" that I applied to all the walls, inside and out. So it didn't matter after all that the two batches hadn't matched - and I had exactly enough of the slip; I didn't need to mix more.

A brief aside: Pretend that you cannot see that "cow" in the shadowy barn. She has a story all her own that I will relate in an upcoming post. 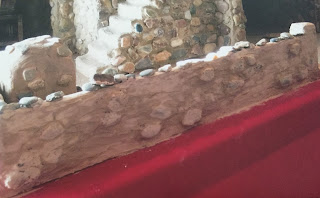 The added slip has almost dried on the west front wall.... 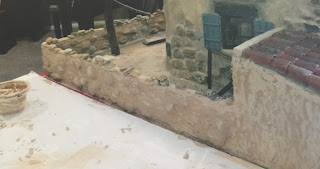 ...and the east walls were in the process of drying, after which the stuccoing would be complete. 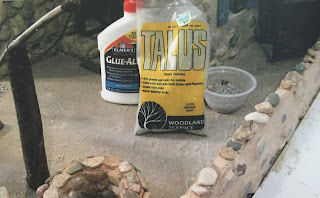 Except, of course, for the never-ending sanding! I sanded the walls and stones lightly, so that only portions of the stones were completely revealed. And - finally, at long last - the never-ending sanding had ended! But one last thing remained to be done in the farmyard. Two bags of gravel waited to be spread over the entire area within the boundary walls. 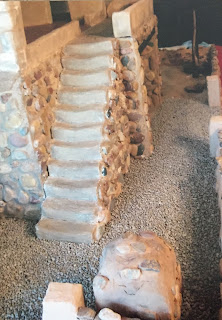 I applied a generous layer of glue to the farmyard, working in small sections. The gravel was spread - also generously - over the glue and pressed down firmly. Unfortunately, I spread the gravel a bit too generously because I ran out of gravel just before I reached the well, so it was necessary to buy a third bag. 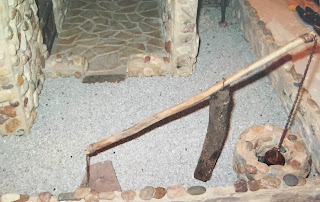 The application of gravel continued on to the well area and around to the chicken run. After the gravel was securely glued down, I found a good flat stone that I placed in the approximate standing spot for using the balancing lever for the well. I placed a second flat stone at the outside entrance to the boy's room.

There still remained numerous farmhouse tasks to complete, but the basic structure and farmyard additions were finished! It was time to move the farmhouse to another (temporary) location where I would work on the myriad of miscellaneous items that had to be done before I could call the farmhouse truly FINISHED. 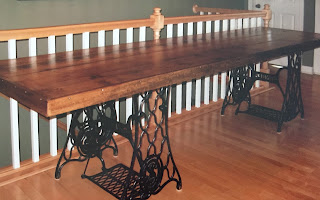 This is the table top that Robert built. He makes beautiful table tops but balks at building the table bases. So I brought these antique Singer sewing machine bases out of the storeroom, and they serve their new purpose wonderfully. The table was in the living room of our townhouse in this photo, but it would eventually be moved to the basement family room, where it would provide a permanent home shared by the French farmhouse and the adobe house. 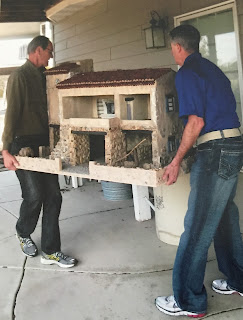 Moving Up! Robert (left side) and his friend Steve carry the farmhouse VERY CAREFULLY from the basement level to the living room via the outdoor route. They wanted to avoid carrying the house up the indoor stairs, not being sure of its maneuverability. (Nor its weight!) 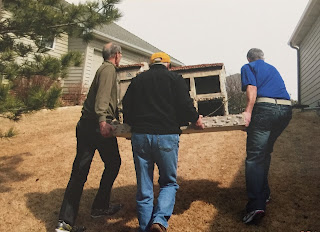 Climbing the Hill! Our neighbor, Dick, joined in to act as rear guardsman. Just in case. I only watched - with bated breath and rapid heart rate - this oh so scary operation. 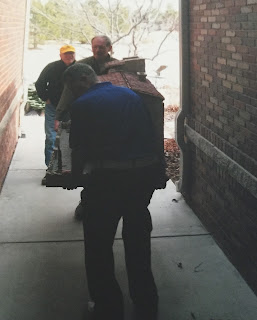 The Home Stretch! They've made it successfully around to the front of the house - ready to carry the farmhouse through the front door (only two steps up to manage) and to the waiting table, which is just a few steps inside the door. 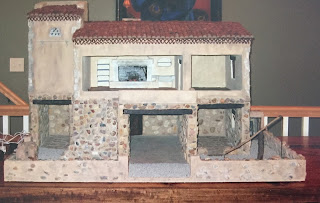 Home Safe! And the French farmhouse was finally at rest on the beautiful new table: safe, sound, and
all in one piece!


The French Farmhouse is nearing Moving-In time, which will also be the time when I introduce the inhabitants of the farmhouse. But before that day comes, there's another inhabitant of sorts that requires an introduction. And an explanation. And possibly even an exclamation. (Cowabunga!!) I hope you'll stop by next week to meet this mysterious embarrassment.