The front farmyard of the French farmhouse was the only possible choice of a site for the bake oven and the well. It would be so satisfying and so much fun to have all the space I need when I build a miniature house. But without adding on extra rooms to my real house (as Aunt Dorothy did, which you may remember if you read my first blogpost) there's no chance that space will ever be available. So I must make do with the limited space I have and hope that the inhabitants of the farmhouse won't mind making do with their limited work space. 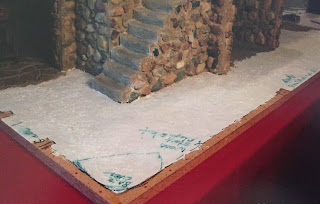 I prepared the farmyard by applying a thin layer of joint compound to the entire area; then I dabbed the moist joint compound with a crumpled paper towel to erase the trowel marks. I also marked off the spots where the bake oven, the well, and the gate posts would be placed. I left the outer edge of the base board clear; that space was reserved for the boundary wall. 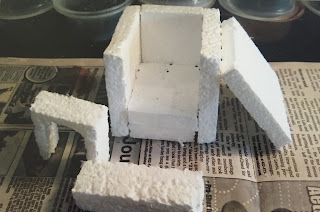 I measured and cut pieces of styrofoam for the bake oven, after spending quite some time working out a design. It was of necessity much smaller than I had wanted it to be, which means that the farmer's wife may need to add another baking day to her usual weekly chore. 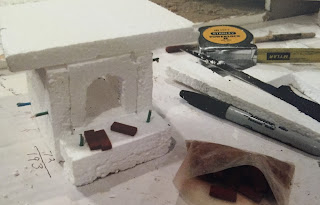 I finished cutting all the pieces for the oven and glued some of the pieces together. I later changed the  design of the roof to a traditional domed style. 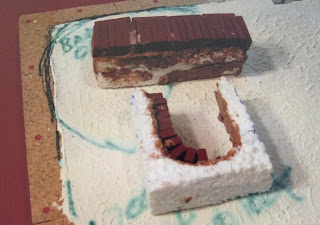 I laid bricks on the exterior ledge of the oven and started laying them around the door arch. As far as I can recall, this was my first attempt ever at bricklaying. Fortunately, I can place all the blame for the less-than-proficient work on the farmer and his son. They were the last ones to work on repairing the aging bake oven, and they did their best; but they're much better farmers than bricklayers. 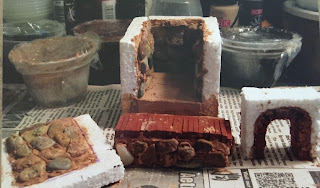 I added several colors of paint to the joint compound that I used as mortar for the stones in the bake oven. While the "mortar" was wet, I embedded small stones on the interior walls, the ceiling piece, and on the front and sides of the oven ledge. I also finished the brick lining around the arched door. 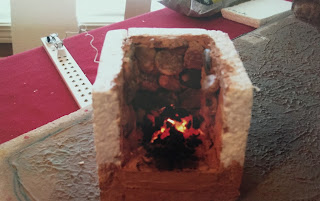 I built a charcoal fire in the bake oven, using bits of orange tissue paper and bronze foil paper, real charcoal, and a center light bulb. 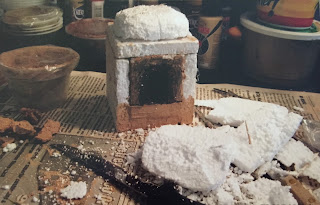 I glued the ceiling piece and the arched door in place on the oven; then I made a proper pig's breakfast of cutting the styrofoam for the domed roof! Thank goodness for joint compound. 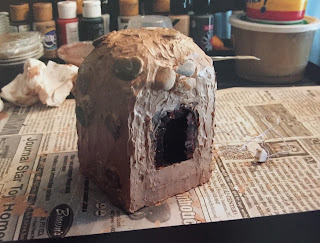 I stuccoed over the entire oven and embedded random flat stones in the stucco. The result looked like a funny beehive! 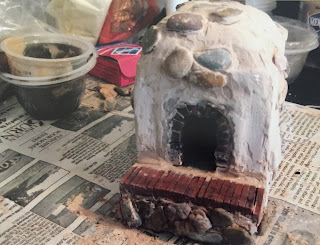 After sanding the exterior of the oven, I attached the front brick ledge, using both joint compound and glue - and the bake oven was ready for the next baking day!

When I first read about balancing wells in my book, "The French Farmhouse," I knew that was the type of well that I wanted for my miniature farmhouse. The balancing well is a very shallow well with generally brackish water. (Generally unhealthy.) The water is drawn from the well by a long pole with a bucket on one end that is levered up and down with the aid of a sturdy upright post. Other than a brief description in my farmhouse book, I couldn't find more specific information on the balancing well. I had to rely on one or two photographs and a drawing from the farmhouse book in order to build my miniature balancing well. I have made it look as authentic as I could, but I'm sure that my farmhouse family wishes that I'd done some research on a more efficient, healthier well. They must all resort to drinking wine instead of water in order to stay healthy. But since most drinking water at that time was unhealthy, even a different well would not have saved their wine supply. 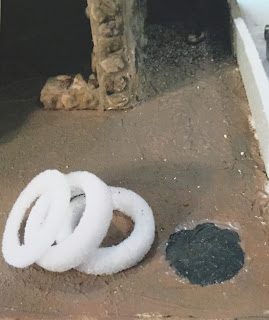 Before I began to build the balancing well, I painted the stuccoed farmyard with a mixture of Khaki Tan and Raw Umber paint. Then I outlined a circular space where the well would be placed and painted the circle with a "brackish water" color, which looks more black than brackish in the above photo. 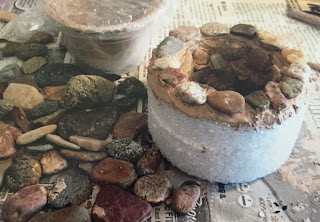 I glued three styrofoam rings together in a stack and spread a generous layer of colored joint compound on the interior of the circular stack, in which I placed several courses of small, flat stones (yes, courtesy of my grandchildren) from top to bottom. I added more joint compound and stones to the top edge of the well. 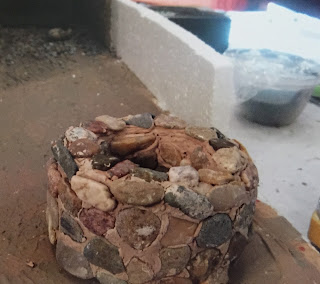 I completed the well cistern by embedding stones on the entire exterior before I glued the cistern in place on the base board. 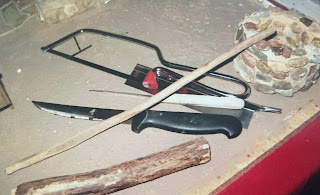 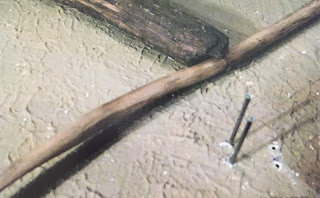 I needed to cut a notch in the top of the upright post to provide a resting place for the balancing lever.  That was a challenge, because the wood turned out to be as hard as a rock, and I didn't have a proper tool (whatever that might have been) for the job. I used a thin saw; used a screwdriver that I hammered in like a chisel; used a small paring knife; used a serrated steak knife; and finally used one of my tiny all-purpose tools and just hacked away at the wood. At last - a notch! And all my fingers were intact. I contrived a wire "staple" for the top of the post so that the balancing lever had a wider range of movement. Then I hammered two small nails into the particle board base to anchor the upright post. (Actually, I measured wrong the first time, so I had four holes for two nails. Nothing new there.) 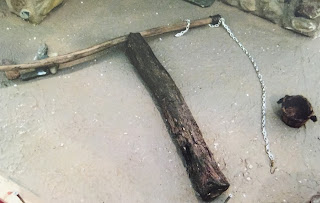 I darkened and aged the upright post a bit. The silver chain came from my jewelry box and was put to use to lower and raise the water bucket, after I contrived a hook to hold the bucket. 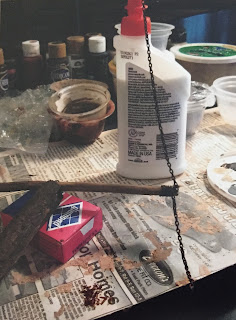 I aged the chain and hook by painting on a coat of Burnt Umber and rubbing on a bit of rust-colored paint. Then it had to be hung out to dry with the help of an Elmer's Glue bottle. 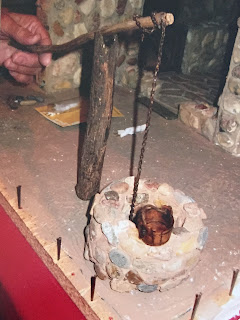 Robert helped me drill two small holes in the bottom of the upright post, into which the nails that I put in the base board fit. I swabbed the two nails with glue before inserting them into the post holes. That's Robert's hand holding the balancing lever to test the stability of the upright post. (It passed muster.) I later added a rope "pull" to the end of the lever so that it could be raised and lowered by even a child. And after all that work, this is my only photo of the finished well at this stage of the farmhouse construction!

All those nails that you can see in the last photo are there for a definite purpose: to keep the walls from tumbling down. "What walls?" you may ask. Come back next week and watch those walls appear - just like magic! (Or like a lot of hard work behind the magician's curtain.)