The type of floor that I wanted for my French farmhouse had been decided on from the early planning stage. It must definitely be a terra cotta tile floor, and I knew that I wanted the floor to be tiled with the traditional "tomettes," tiny Provincial hexagons that measure about four inches across in real size and are laid without the use of grout or mortar.

So the next decision was how to make the tiles. There were any number of materials that I could use, from dependable Sculpey to foam board to light cardboard to egg cartons. The problem was that I needed so many tiles. I estimated that I probably would need a thousand tomettes; but I was already working on making the clay canal tiles for the roof, and I needed an estimated fifteen hundred of those. Time was a critical factor, and it was going to take me a long, long, time to make a thousand quarter-inch hexagons - no matter what material I used.

I took the easy way out. I found Henry Bart's handmade French tomettes online and ordered ten bags. Each bag contained 110 tomettes. And I used every last one of the 1100 tiles for the kitchen floor, even scraping up the tile dust to use to fill cracks so as not to waste a crumb of the material. The handmade tiles were expensive, so I decided that I would put a wood floor in the bedroom instead of using the tomettes. The expense was well worth the sheer relief of not having to make them myself. Thank you, Henry Bart! 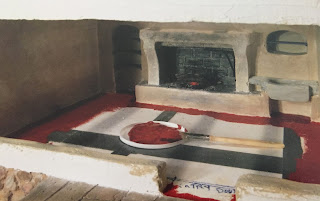 The first step in preparing the floor for the tiles was to cover the electrical wiring with duct tape; then I painted a terra cotta base coat on the floor so that there would be no light color showing between the tiles. 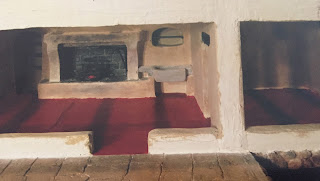 I covered the floors in both upper-level rooms with the terra cotta paint. The dark strips that you'll see in these photos are the shadows of the ceiling beams overhead. 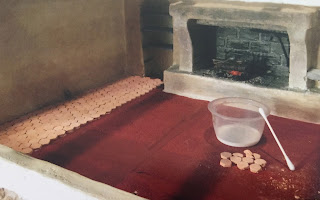 I began to glue down the tiny tomette tiles. 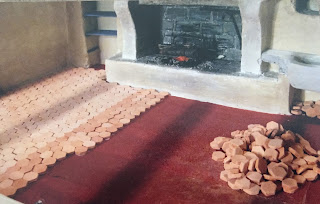 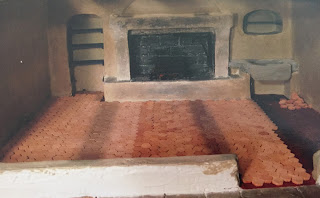 And kept on keeping on…. 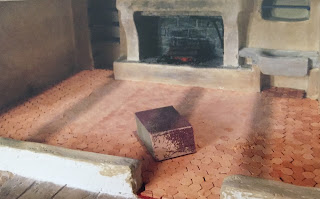 The tiles were all down! Finished! Except for the edges, for which I needed a different material. I tried out my sanding block on the floor; it worked well, and the dust from sanding filled in the spaces between tiles, which was a bonus. 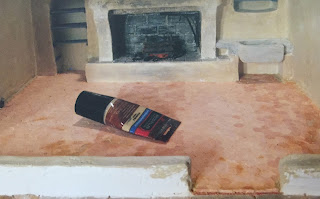 I filled in the edges of the floor with wood filler. I found this convenient squeeze tube that made the job much easier than I expected. When the wood filler had dried, I sanded the entire floor. 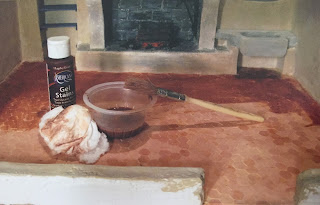 I began to apply the first layer of finishing material; I mixed a maple gel stain with water to make a reddish-brown color wash. 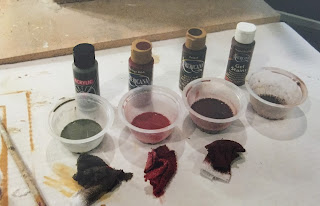 I applied many layers of various colors to the tile floor: a russet wash, yellow ochre, brick, and gray. Many of these colors were applied more than once to attain depth and an aged, worn look. 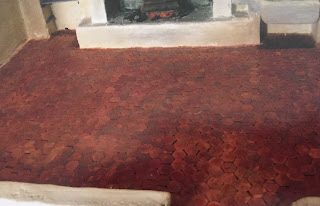 For a final finish, I rubbed on linseed oil, which gave the tiles a mellowed patina. The main room floor was finished! (There is a bit of glare on this photo which makes the tiles appear blotchier than they really are.) 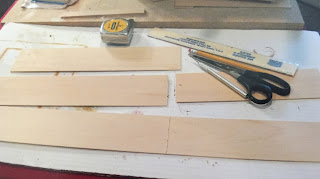 It was time to move on to the bedroom, where I changed the flooring material from tile to wood. I measured and cut balsa wood pieces for the floor. 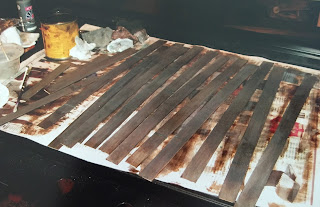 I applied a coat of "Dark Walnut" stain to the boards and used an Exacto knife to score the wood to simulate boards of varying lengths. 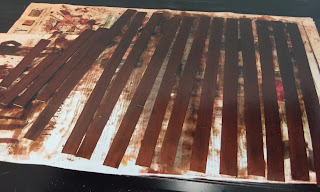 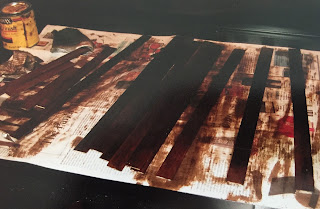 The final coat of color was more of the Dark Walnut stain. 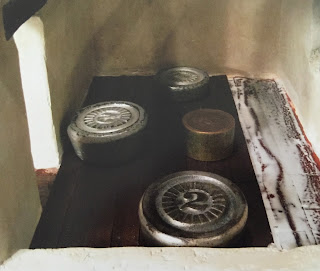 Most of the boards have been glued in place and weighted down for drying. The floor boards fit well - a good fit the first time is a fine and rare thing in my experience! 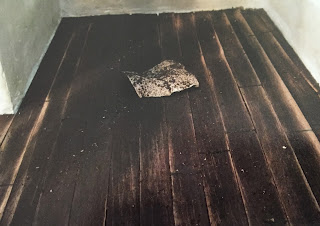 The floor needed some sanding both to level it and to age it. 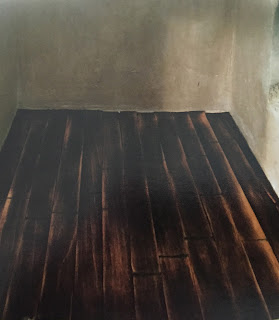 Finally, I gave the entire floor a coat of "fruitwood" stain, followed by an application of linseed oil. And the bedroom floor was finished!

The interior of the French farmhouse was finally finished! But there were many things that I still had to do. My next blogpost will show some windows and shutters for the exterior, along with one last interior detail that I had completely overlooked. That discovery warranted much pulling of hair and clenching of teeth and was dealt with only by a bit of (I admit it) cheating on my part. Come back next week and see if you can sympathize with my situation, which will involve sticks and stones, but no styrofoam!