The French Farmhouse: Ups and Downs of the Staircase

The lower level of my high house was basically (very basic) complete, so it was time to head upstairs. Of course, I had to build the stairs before I could head up them. I had experimented earlier with the stairs, trying to get the angle of ascent/descent right. (That math thing again!) My husband was helpful. He is a "numbers" man and has a degree in accounting. But (I digress here) he has never used his degree in that capacity; he chose, instead of sitting at a desk fiddling with numbers, to sit in a cockpit fiddling with dials and controls; and I, never a numbers person, take care of all our family finances. Go figure! (In a manner of speaking.) So - to the stairs! 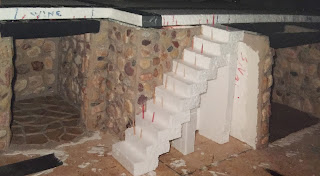 The staircase has been secured - temporarily, depending on the fit - with toothpicks and glue. 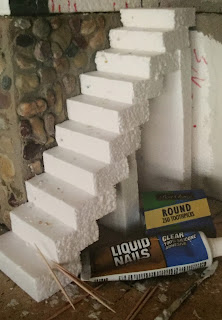 After going up and down several times, both in my imagination and finger walking, I determined that the stairs were safe; at least I hadn't come tumbling down. So I secured them permanently in place and trimmed them up. 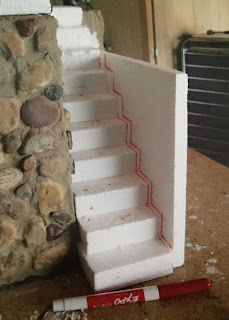 I've marked the placement of the solid wall that will enclose the staircase. 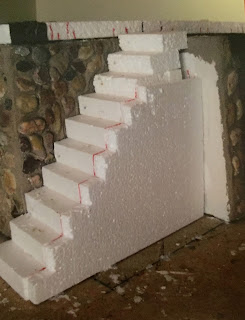 The solid wall has been trimmed to fit the stairs. Before securing it permanently, I wrote a tiny note to enclose within the cavity of the stair wall. The note describes the origins of the house and is meant for future generations to find if the farmhouse should be demolished. Perish the thought! (I had not thought to do this when I built the adobe house - so I belatedly wrote another note and inserted it into the wall surrounding the adobe house.) Are my thoughts becoming more negative or more realistic as I grow older? 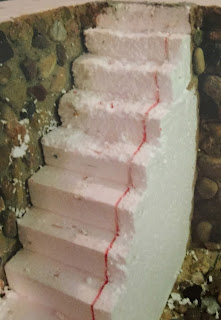 I aged the stairs a bit by hollowing out the centers where they would have received the most wear over time. 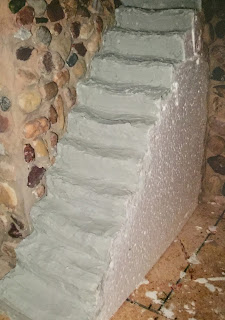 I applied joint compound, mixed with gray paint, to the stairs. I added other paint colors later to create a more realistic stone finish. 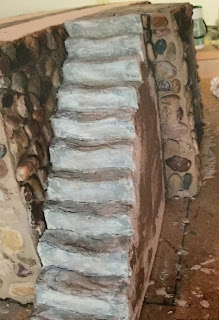 I continued to add color layers of paint on the stairs. 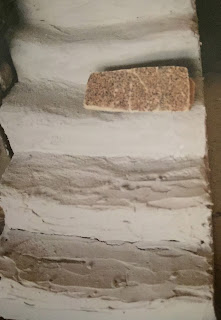 The stairs needed to be sanded several times in order to smooth out the cracks in the joint compound. 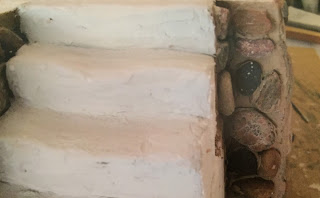 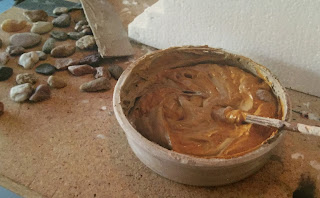 I tried a new, experimental technique to embed the real stones in the outer stair wall. I mixed various colors of paint - Gray, Desert Sand, Yellow Ochre, and Khaki Tan - into the joint compound, trying to match the existing mortar color. 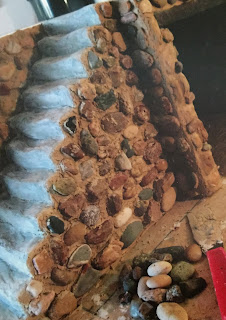 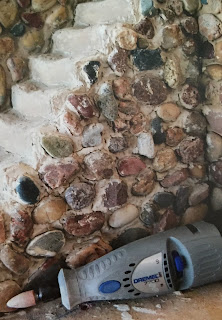 The new technique was time saving, but the mortar was much rougher than that between the faux stones. I used my Dremel tool to smooth out some of the roughness. 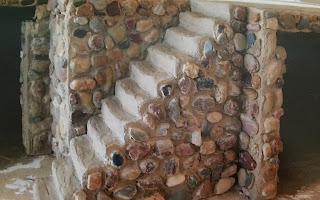 The Dremel helped; but the mortar still wasn't as smooth as I wanted, so I made tiny rolls of coarse sandpaper and sanded around the stones by hand where the mortar was roughest. (Sort of like flossing one's teeth.) Not perfect - but finished! 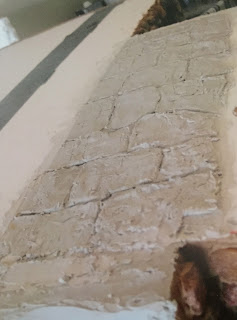 To make the stones for the porch (le porche - thanks, Anna!) I used the same technique as for the wall stones and the flagstones on the lower level. I spread on joint compound, let it set up a little, then drew in grooves to simulate the stones. 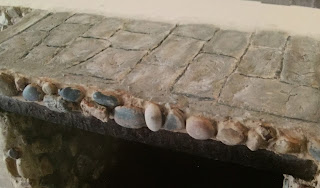 When the "stones" had dried, I sanded them and applied a mixture of several colors of paint: taupe, dark gray-green, and light gray, followed by a wash of white. 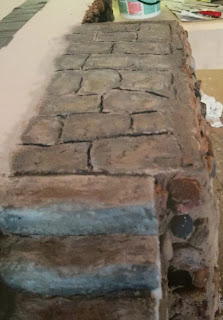 I added a wash of taupe to the stairs as well; they looked a bit too gray to me. I added rubbed-on dirt
later to achieve an aged, well-used finish on both the stairs and the porch.

Having a staircase to the upper level meant that I could start working on the upper back wall, where the kitchen area and the fireplace are located. Tune in next week as more sticks and stones and styrofoam are used for making everything - including the kitchen sink!