The French Farmhouse: NO WAY OUT!

One night when I couldn't sleep, I was mulling over different aspects of my French farmhouse project. Suddenly, a horrific realization struck me. The barn has no back door! (Why do these illuminating revelations always happen at three o'clock in the morning?) There must be a milk cow for the farm, and she must live in the barn. So for the next hour, I tried to mentally devise a way for her to be let out to pasture and brought  in again for milking. It made no sense to drive her through the front barn door, across the courtyard of the farmhouse and out the house gate. There had to be a wide back doorway that could accommodate the cow as well as a wagonload of hay, etc. This was a major oversight!

There were only two facts that mattered when I tried to decide how to remedy the problem: I needed a BIG DOOR in the back wall of the barn. And I was NOT going to try to cut into that STONE WALL! I had already experienced the near impossibility of cutting through the rock-hard faux stones. I couldn't be sure that the whole structure wouldn't collapse from the force necessary to remove such a large portion of the wall. So I just cheated.

Actually, at the time I thought that I was cheating, but I have since had a change of heart. Now I know that I was creating the illusion of realness, rather than replicating real life. Thank you, Giac! I'm now free of guilt. (That particular guilt, at least.) 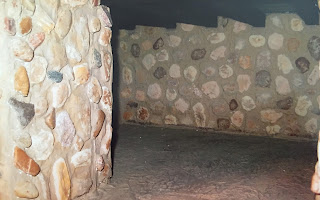 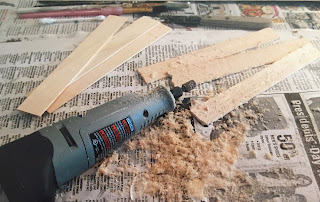 Back to the balsa wood boards. I cut three pieces for each side of the wide double door. 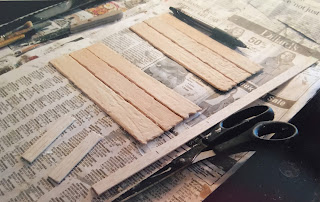 These are the two sections of the back barn door. The overall door measures 7 feet high by 6 feet wide. (Or it would be that size in real life.) 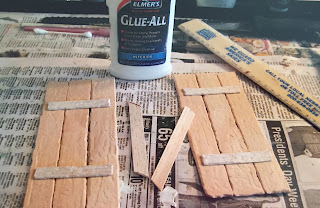 I assembled the wood pieces for the two halves of the door and secured the vertical pieces with battens... 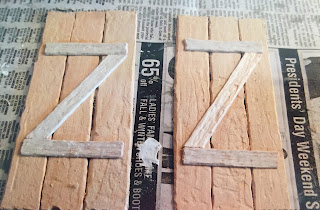 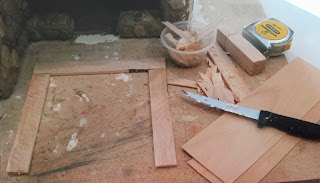 I cut and aged the balsa wood for the door frame. 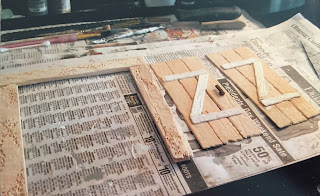 All the door components were in place, ready to stain. I devised a simple latch board for the door. 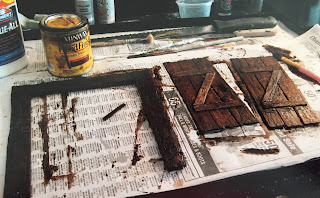 I used a walnut stain for the two doors and the door frame. 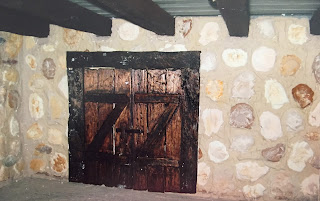 I installed the completed door as one unit, and it is held in place with a thick layer of joint compound spread over the back stone wall. The working door latch is in place. The doors open to the outside, so Thank Goodness that cow will be able to get out to graze! 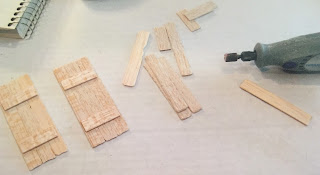 Now that the cow may safely graze, I moved on to creating the window shutters for the boy's room and for the upper-level bedroom. The boards and battens were given the Dremel treatment to age them. 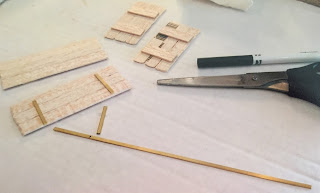 I cut strap hinges for the shutters from a thin, flat metal strip. 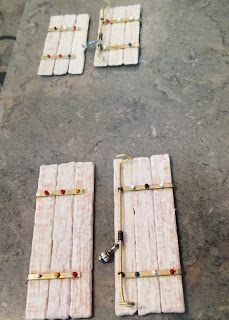 I attached the strap hinges to the shutters using round pin heads for the "bolts." The vertical rods on the sides of the shutters are the "espagnolettes" for opening and closing the shutters. Robert constructed those for me from copper wire; he performed a tricky bendy thing with two needle-nose pliers - used simultaneously. He's so much better with "real" tools than I am. 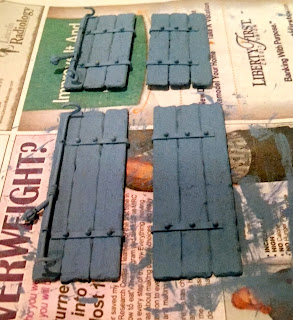 I painted the shutters with a mixture of gray, white, and "Blue Bayou" paints. 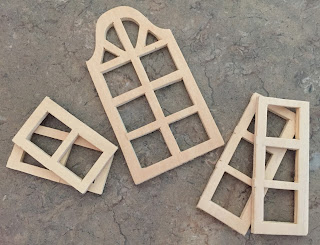 To make the windows (fenetres) I used four commercial windows like the one shown above, but I cut the windows down to my required size. I wasted much of the windows, but they were inexpensive, and I can surely put the leftovers to use in some way. 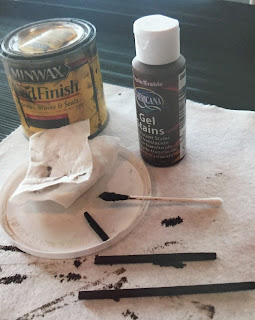 These are the pieces of balsa wood that I used to make the "pivoting bars" for the window latches. 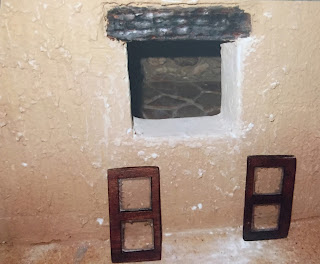 The window frames have been stained and pieces of plexiglass installed for the panes. (You may notice that the exterior wall shown here has been colored. I was experimenting with various colors and textures. This one was a definite no-go.) 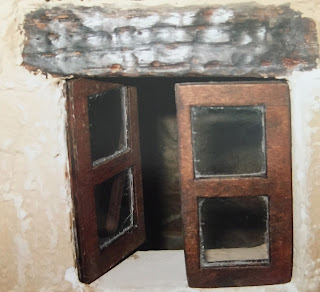 The windows have been installed for the boy's room. The windows open to the inside. A farmhouse of this era had few windows, because windows allowed more exposure to the elements and because the glass panes involved great expense. My particular farmhouse thankfully has few windows, because I had a really hard time cutting and fitting each pane separately. I glazed each pane with a thin bead of glue, but when I tried to clean off the excess with Q-Tips and water, nothing happened. Through experimenting on a "practice" piece of plexiglass, I found that applying nail polish remover with a Q-Tip worked best, but not perfectly. So all the window panes are sort of smeary and smudged. But I did all that I could. Honest. 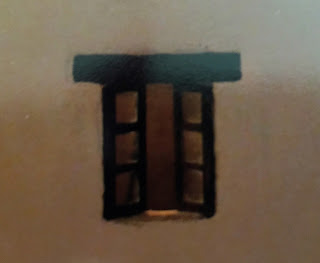 The window for the upper-level bedroom is a classic French window: two-panelled, six or eight panes, and opening inwards. 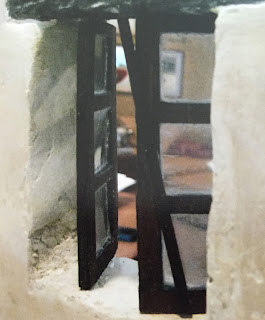 The upper-level window has been put in place temporarily so that I could check for the fit of the pivoting bar that was a common method used for latching a window. I attached the bar to the window frame by cutting a round-head straight pin down to a shorter length and using the short pin as a nail. The pin acts as a pull-knob and also allows the latch board to pivot. This photo shows that there is some obvious repair work to be done in that left-hand corner. I can't remember what happened, but I'm sure that I was not at fault. Not me!

Although the window shutters are ready to hang, they can't be installed until the exterior of the house is finished - and that'll be a long while in coming. I'll move a further step in that direction next week. Although this post has mostly involved sticks, next time I'll move on to some stones in various capacities. And I'm pretty sure there's also some styrofoam involved. Come see!