The French farmhouse was finally beginning to take shape and look like an actual house. Since the lower level was made of stone, I wanted to have some of them exposed on the stuccoed exterior. I decided to use real stones, which may not have been the best decision. When my grandchildren heard that I needed stones, they brought me many offerings. Stones and stones and stones. Then they stood and watched to make sure that their offerings were used and appreciated. I had to do a lot of surreptitious sorting out; I made some sneaky substitutions; I performed sleight of hand tricks. In the end, I used way more stones than I had planned to use. But I had some really happy grandchildren. 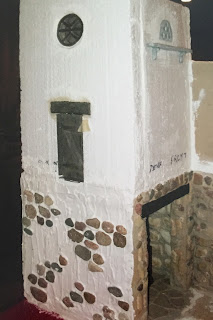 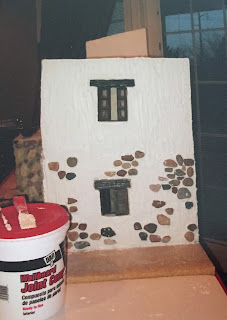 I stuccoed the entire east wall and embedded many more stones in the lower level. The grandchildren weren't around to hold me accountable for that end, but it was too late; I had to make sure the two ends looked more or less the same. 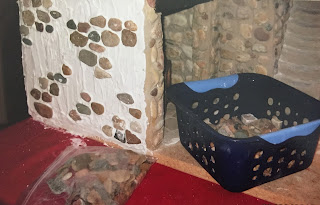 And there were still baskets and bags of stone offerings left over. I quickly hid them away. 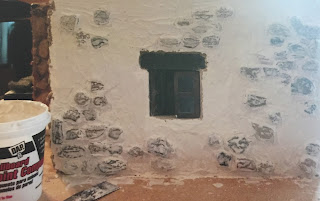 I applied stucco to the end walls over the stones that I embedded. 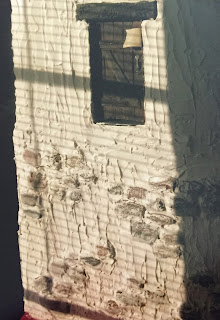 Bright sunshine pouring through my workroom window created shadows of the window shades in this photo. This shows the dovecote wall before I sanded it…. 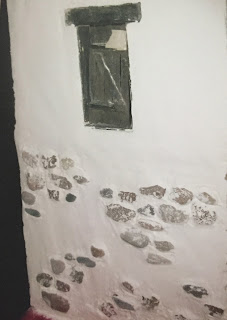 ….and after sanding. Although the stuccoing had been completed on all the exterior walls, I sanded this one first just to see how it would look. The other walls waited their turn. (Groan.) That brings me to the end of one kind of stone work (for the time being.) And so on to the next kind. 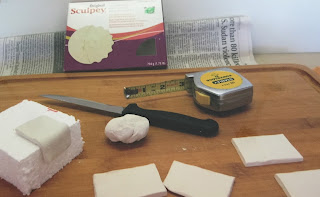 Time to make the quoins, the masonry blocks at the corner of a wall. I softened, rolled out, and cut Sculpey clay to make quoins for all the upper wall corners. I formed an "L" shape to simulate the actual cornerstone. (Should I tell you that the lower level has no quoins because I never even thought to make them?) No, I thought not. It's my secret. 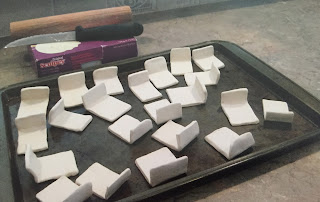 I baked the clay at 275 degrees for ten minutes.

The quoins have cooled - ready to be painted. 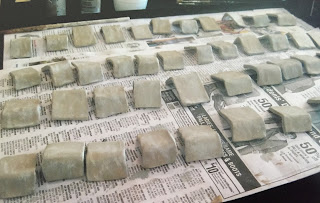 I painted the baked quoins with a water-thinned Steel Gray paint and added Khaki Tan and a cream color. 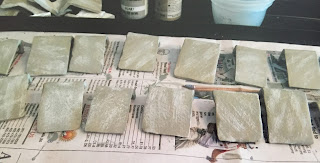 The final touches were streaks of thinned Khaki Tan and more of the cream color. 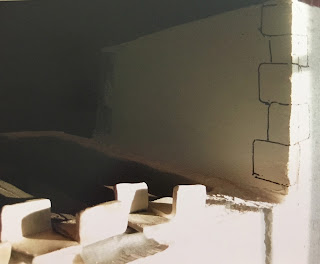 I used a marker to experiment with the placement and spacing of the quoins. 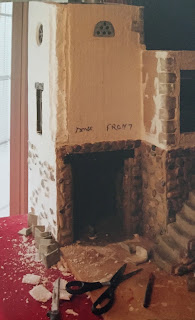 After I had installed some of the quoins on the dovecote corner wall, I wasn't happy with the fit; they protruded out too far from the stuccoed surface. I removed them by chipping them out - a messy job - then I cut a 1/8" deep strip of the styrofoam from both sides of the corner wall so that the quoins would fit flush with the walls. I repeated the slicing process on all the upper-level corners of the house. 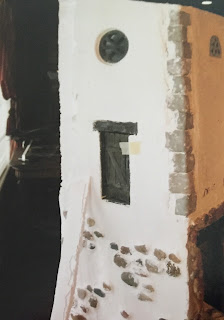 I spread joint compound in the cut out space and embedded the quoins again. That was a much better fit, but then it was necessary to touch up the areas around the quoins to minimize any uneven spaces. I filled in cracks and hollows around the quoins with several applications of joint compound, waiting a long time for each layer to dry before I could spread on more. In the photo above, you can see one of the sliced off strips leaning against the dovecote wall. 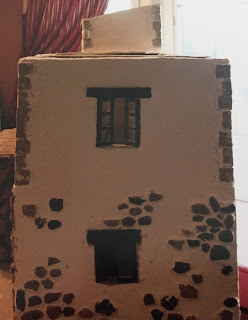 Placing the quoins was a much longer process than I had expected, because of all the slicing out and refilling and retouching. 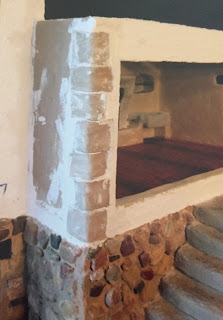 When I was at last finished with that messy, tedious job, Robert thought that I should have a mini-celebration, so he brought me a glass of French wine and fresh strawberries. (I didn't even think of taking a photo until it was too late. I finished off the wine and strawberries much faster than I finished the quoins.) 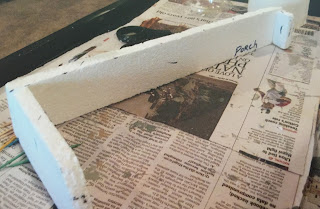 The next task was to build a low parapet around the porch. (Or maybe I should call it a balcony, since it's on the upper level.) 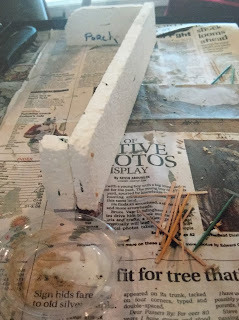 The parapet consists of three pieces of styrofoam held together with toothpicks and glue. I cut a curve in the longer end piece of the parapet; that gave it a more pleasing fit against the opening where it joins the house wall. 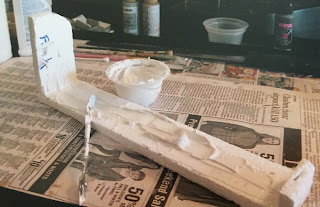 I stuccoed the inner side of the parapet, using my favorite tiny spreading tool and a small cup for the stucco. You may have noticed that I use dozens of those small plastic cups. They are useful for so many things, and I have an ongoing supply of them because they originally contained applesauce or fruit chunks that my grandchildren consume voraciously when they're here. 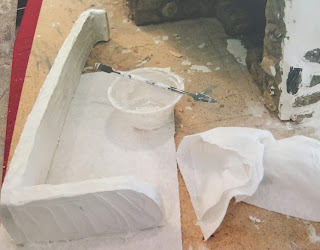 Then I stuccoed the exterior side and across the top of the parapet. 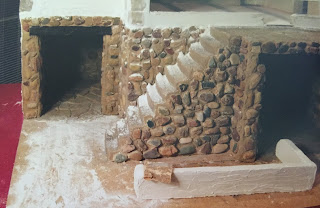 I thought I should sand the parapet before I installed it. I didn't want to exert all that sanding pressure after it was attached to the balcony and risk weakening the corner joins. So I made another mess.
But of course that mess was nothing compared to what was in store when I started sanding all the remaining exterior walls. 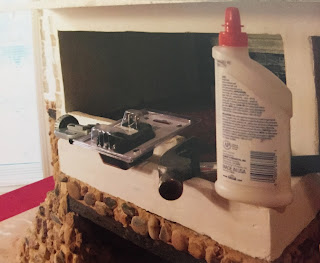 The parapet has been glued in place on the balcony. It was weighted down to dry with a motley collection of whatever objects were close at hand. Apparently, such a sophisticated approach was successful; the parapet did not fall off the balcony after it dried.


Well, I covered an assortment of projects here, and each project has been left more or less incomplete, because as always happens, one thing must wait for another thing that must wait for something else to be done before any forward motion takes place. But I hope you'll come back next week and watch me Raise the Roof. That should start things moving!