The French Farmhouse: Raising the Roof

I finally felt as though the French farmhouse was really becoming a house rather than an ill-assorted heap of sticks and stones and styrofoam. But it was still open to all the elements. (The elements in this case being mostly the shifting, sifting dust motes that I could feel drifting through the air in the basement family room where I had my work space.) I am not admitting that I neglected keeping house in favor of playing house; I'm just saying that not all the dust in the immediate vicinity of the farmhouse came from joint compound being sanded for hours and hours and hours on end. It was definitely time to "put a lid on it!" 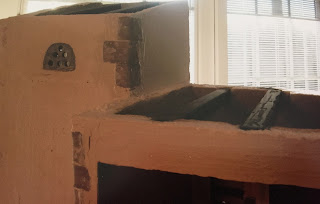 The ceiling beams had been installed on the upper level for some time. (Remember the shadows of the beams when I laid the tile and wood floors?) I didn't include the beam installation in my posts because the technique was the same as for the lower level. 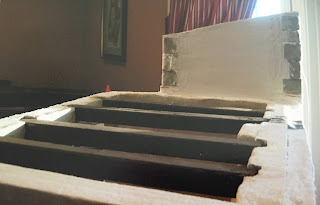 Another view of the ceiling beams in the main room and the bedroom. 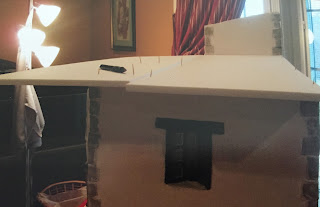 I had to use two pieces of styrofoam for the main house ceiling; I couldn't find the right thickness of styrofoam in a single piece that was wide enough. I measured for the correct width and cut the pieces to fit. 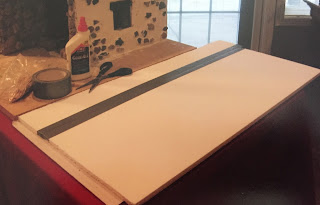 The styrofoam for the ceiling has been cut and taped together for a correct fit. 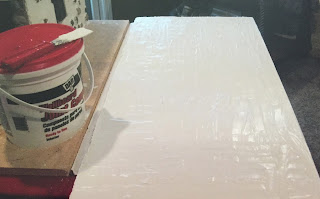 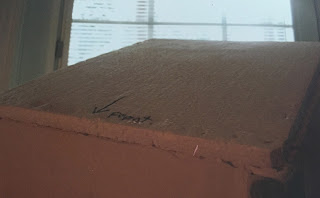 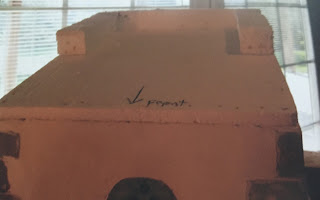 I cut and installed three pieces of styrofoam for the parapet on the dovecote roof. I had a very hard time getting the parapet's sloping angles right. (Does that surprise anyone?) 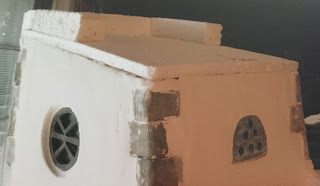 Another view of the dovecote roof parapet. 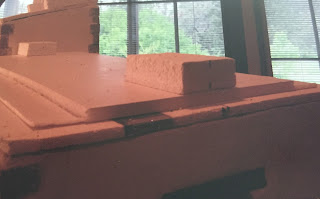 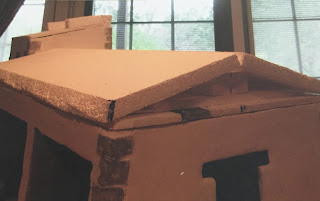 I measured and cut two styrofoam roof pieces and secured them at the ridge line and at the flat ceiling base with toothpicks and glue. A slight mitre cut was necessary on the "down" edges of the roof pieces. I had to make the cuts with a knife - a harrowing experience! 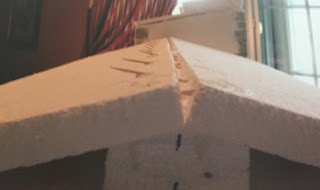 A closer view of the two roof pieces in place. 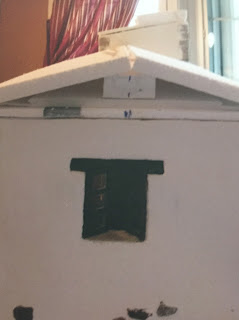 I did not mitre the roof peaks but will fill in the gap with joint compound before I lay the ridgeline canal tiles. 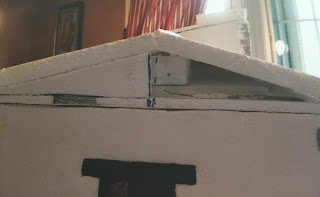 I cut two end pieces for the house. One piece has been installed; you can see one of the two styrofoam blocks that will lend support to the roof when all the canal tiles have been laid. 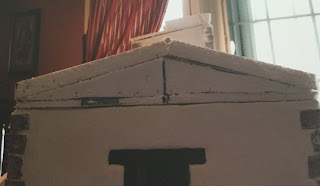 Both end pieces were on; I admit that this was one of my sloppiest bits of work. But I always say how forgiving styrofoam is, and sure enough, it forgave me! 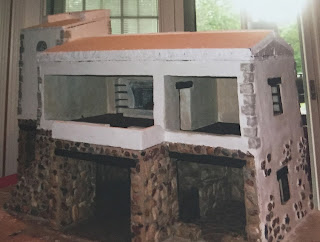 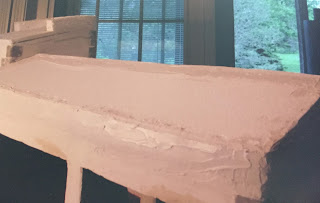 I started applying joint compound to the ridge line of the roof…. 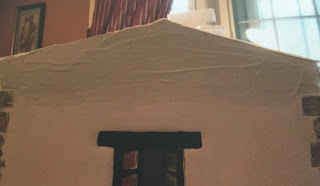 ….and to the upper part of the east end wall. 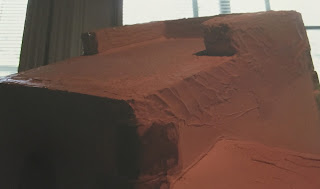 Then I spread more joint compound around the upper edges of the dovecote and on the parapet.
And I knew that every swipe of my putty knife meant many swipes with my sandpaper. Such is the joy of plastering everything in sight with joint compound. 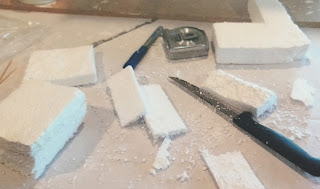 Every house needs a chimney, and every simple farmhouse needs a simple chimney. Or so I told myself, because I really wanted to keep the chimney as simple as possible. I started by cutting the styrofoam pieces. 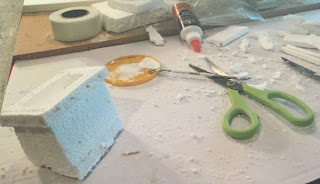 It took me a long time to work out the correct angle for the chimney piece, since it's built onto the back slope of the roof. (You'll notice that I am not making any comments regarding math skills.)
I added a trim piece around the top - a simple trim piece! 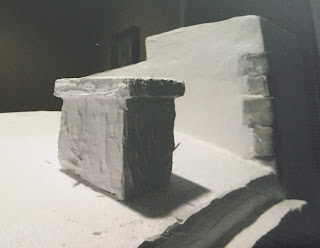 I applied the first layer of joint compound to the chimney. While I was holding it up to look under the trim edge for spots that I might have missed, I almost dropped the chimney and had to keep fumbling it like a football to recover it. I ended up with cold, wet joint compound all over my neck and face. That was too funny; I belly-laughed all by myself! 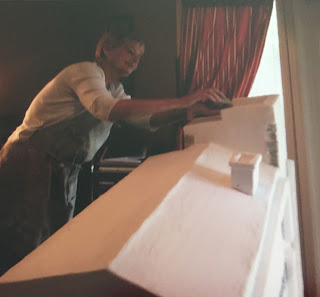 I did some final (finally!) sanding on the chimney and the dovecote parapet. I usually needed to stand on a step-stool to comfortably reach the top parts of the house. With no convenient hand holds, there were some scary moments when I thought I might come crashing down on the house. Even the styrofoam would not have forgiven that. 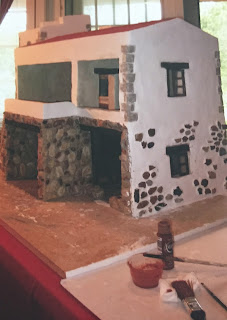 In preparation for laying the canal tiles, I applied a "Burnt Sienna" wash to the main house and dovecote roofs so that there wouldn't be any white color showing under the tiles.


We're edging closer to completion! At least, completion of the farmhouse is near; much remains to be done in the farmhouse "courtyard," which, for lack of space elsewhere, must be a "working" courtyard. Next week's post will mark the end of all those white, white walls and shutterless windows. I hope you'll return to see the next stage in this production of sticks and stones and styrofoam.