The French Farmhouse: Tackling the Tiles

Some of you may remember from my first French Farmhouse post that when I knew I wanted to build the farmhouse, the first thing I did was to experiment with different methods for making canal tiles for the farmhouse roof. After much trial and error, I succeeded in making the tiles, and the construction of the house was underway. (See "The French Farmhouse: How It All Began.)

But before it was time to lay the roof tiles, I had done further research and discovered that I wasn't quite finished with the tile making. I learned about "genoises" and realized that I didn't have any. Not even one! A genoise is a type of cornice used in the south of France, comprised of rows of canal tiles embedded in the walls just below the overhanging roof tiles. The genoises deflect excess water from the walls, since gutters were rarely used on farmhouses.

I brought out my Sculpey clay again and got busy making genoise tiles, which was a much faster project than the canal tiles had been. I didn't need nearly so many genoise tiles, and the technique was much simpler. 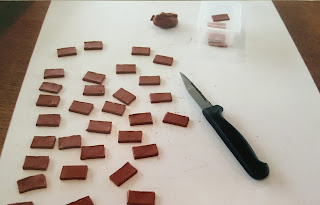 I softened and rolled out terra cotta Sculpey and experimented with a good size for the genoise tiles. I found that making each tile approximately 1/2 inch wide by 7/8 inch long seemed about right. 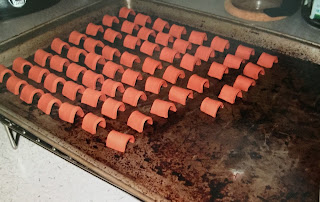 I curved each rectangle of clay into a shallow U shape and baked the clay until firm. 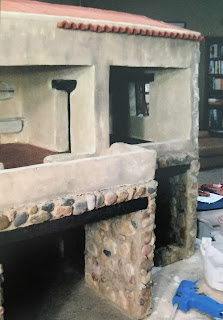 I began by drawing a line across the upper front of the house so that I could keep the row of tiles straight. (The pencilled line is visible, but only barely.) Then I started gluing the genoise tiles to the front wall. 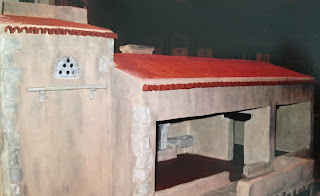 The first row of tiles has been completed on the front of the house and on the dovecote. 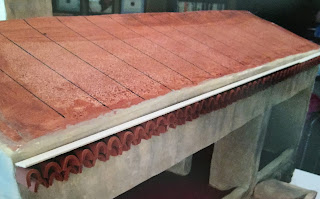 The genoise can have from one to three rows of tiles, depending on the importance of the house. My farmhouse is of little importance and should have only one row. But I made a great many tiles, and the house is of great importance to me, so I added a second row. (Now the farmhouse thinks very highly of itself and is putting on airs.) Notice that the lower row of tiles is set farther back and closer to the wall for better water deflection. In preparation for the roof tiles, I cut a board that will be aged and stained a dark color. The roof tiles will rest on the board for support. I also drew straight guidelines on the roof to help keep the roof tiles in line. (Those wayward tiles!) 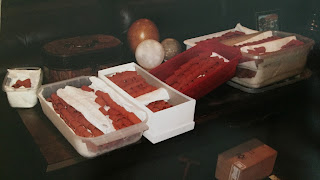 And So It Begins! At this point, I had been making batches of clay canal tiles at random times for more than two years. Boxes and boxes and boxes of tiles. I had packed them all carefully and put them away until the right time. Well, the time was at hand. I was a bundle of nerves. 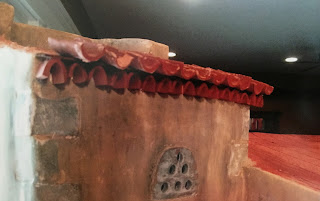 I started with the dovecote roof. (The dovecote roof is small.) I laid the tiles from left to right and from front to back. The lower tiles act as gutters to channel water off the roof. 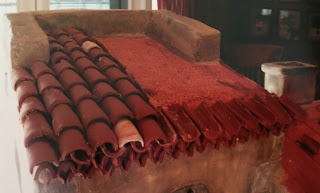 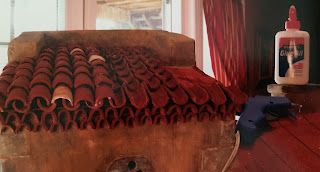 My "technique" was to lay a row of tiles across the front to set the spacing, then to lay a section of the lower tiles, working from front to back. Then the "upper" tiles were laid over the lower "gutter" tiles, also from front to back. After I developed a rhythm of sorts, the work moved along well. I had to experiment with glue. Plain glue didn't set up fast enough, and I didn't trust hot glue to be permanent, so I finally used a combination of the two that worked very well. First, a dab of hot glue on one end, then a couple of smears of Elmer's, and press down oh so gently to avoid a cracked tile. (I couldn't always avoid that. I cracked tiles like they were Easter eggs!) 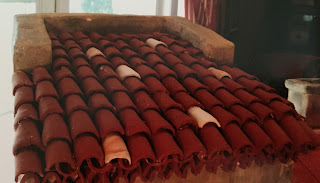 And….the dovecote roof was finished! (Except for painting, aging, weathering, mortaring….) You may notice the white tiles sticking out like a sore thumb. My story: We have a "vacation" house in the Nebraska Sandhills where we go to stay for a weekend or so as often as we can, in order to take care of all the work that needs to be done. (Did I say vacation?) Anyway, that's where I made all the canal tiles, because it's peaceful there, with few interruptions. But our house is also about a hundred miles from anyplace where I can go to buy Sculpey, so if I happened to run out of the terra cotta color, which I did at least twice, I would resort to using the white clay that I fortunately had on hand. 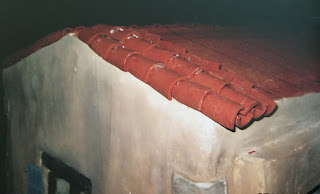 I almost started laying the tiles on the front roof slope first and had placed some tiles temporarily in place. Then I thought better of that idea; it seemed much wiser to begin on the back slope, which would not be as highly visible. Just in case. I actually had no idea of the proper way to go about laying the tiles. All the research that I had done had been in reference to "real size" homes and had not been as helpful as I'd hoped when transposed to miniature scale.

Just after I laid the tiles shown in the photo above, Robert and I were having a glass of wine on the patio while I took a break. Robert said, "I sense that you're feeling some reluctance about getting back to work on the roof." I replied, "No, I'm not reluctant - I'm scared!" But I went back to work. 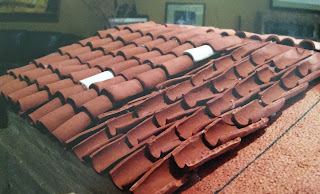 I continued to work in sections as I had on the dovecote roof. I encountered some problems with the shape of the tiles that I had made. I should have made them with a broader, shallower curve; as a result, the fit was often much too tight. I cracked or broke a number of tiles before it finally occurred to me that I could trim the curve down a little. I tried that, using scissors to snip a bit from both sides of each tile. The tiles did not look neat, but the method worked, and the tiles were a much better fit. For some reason, the tiles for the dovecote roof hadn't been so difficult, although I found that I was selective in choosing tiles that seemed larger than others. Possibly that helped. 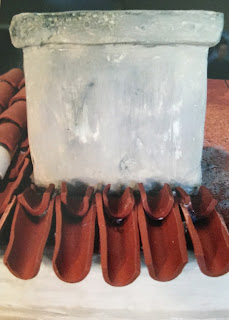 Laying the tiles around the chimney was one of the most difficult parts of the roof; the gutter tiles had to be individually cut to fit the space. 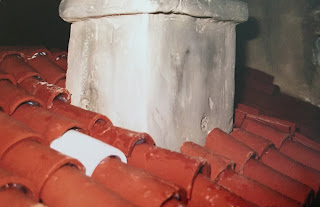 The "upper" tiles were even harder to fit around the chimney; but I didn't break too many! 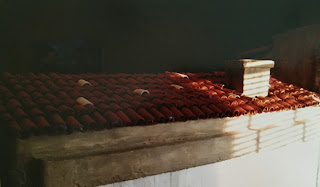 The back roof slope was finished - or at least all the tiles were laid. (There's that striped window shade shadow again!)

I started applying mortar to the ends of the roof tiles, which is done to prevent water from collecting inside the tiles and causing them to loosen or crack. Instead, the water would be channeled into the gutter tile and would run off the roof. I decided at the last minute to put genoise tiles on the back roof, since I still had many extra. I hadn't initially planned to use them, because the back of the farmhouse consists of a solid foam core board attached to the stuccoed frame to allow easy access to the electrical wiring, so the back of the house will always be placed against a wall. But the genoise can be glimpsed from the side, so I think I made the right decision. Although it's probably a very good thing that the back will be against a wall, because the back rows of genoise tiles did not cooperate as well as on the front and don't look as straight. 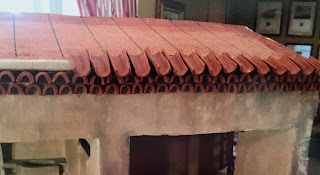 So - on to the front roof slope. I don't know why I started laying the tiles from the right side; the others were all laid from left to right. (I'm almost sure that I must have had a good reason for changing directions!) 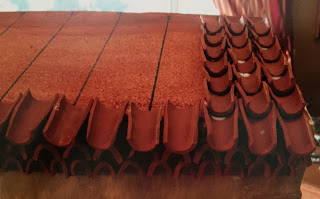 Continuing on to the left…. 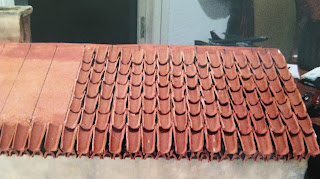 I decided on a different method for the front roof; I laid all the gutter tiles first, then followed with the "upper" tiles instead of working in smaller sections. There was no apparent advantage of one method over the other. 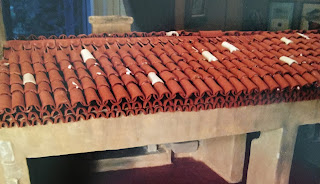 The front roof has been nearly completed, except for the tiles closest to the ridgeline. 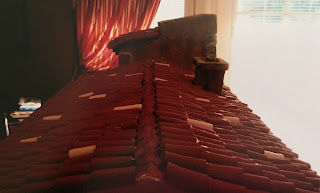 All the tiles have been laid on both slopes of the roof; only the ridgeline tiles remain to be done. 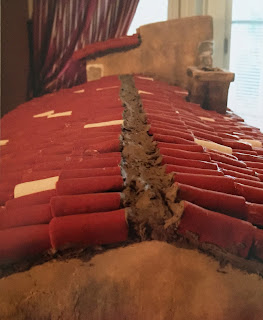 I applied mortar to the roof ridgeline to provide a higher base for the ridgeline tiles. 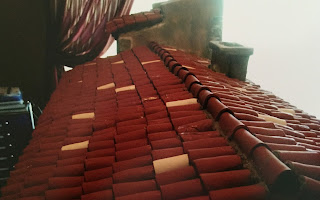 All the ridgeline tiles have been mortared into place. (Instead of gluing the tiles, I embedded them in wet mortar.) And after the mortar dried, the tiles still held securely. A great relief! 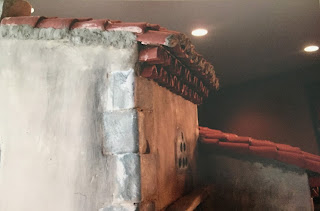 An application of mortar fills the gaps along the end edges of the roof, around the chimney, and along other wall joins, as well as all the tile end openings. The farmhouse roof will not leak! I couldn't find a gray mortar of the right consistency, so I combined some yellowish wood filler with gray acrylic paint and a squeeze from a tube of walnut-colored wood filler to achieve just the color I wanted. I spread it on with my tiny trowel-like tool. The mixture didn't crumble after it dried, as I sort of feared it might. Success! 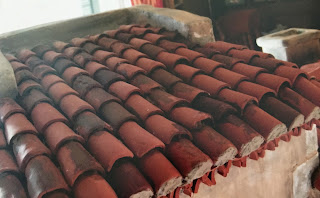 The aging and weathering process has begun on the dovecote roof. (I used the dovecote roof as my experimental site, because it would be the easiest to do over if my aging attempts failed.) I first painted all the white tiles a Dark Russet color and a Light Cinnamon color. I also painted over all the hot glue "globs" that were visible. Later, I sponged on a Light Cinnamon wash, leaving random tiles the original terra cotta color. Then came a wash of Raw Umber, stippled on with a stencil brush. The process seemed to be working, so I left the dovecote "experimental lab" and went on to the main house roof. 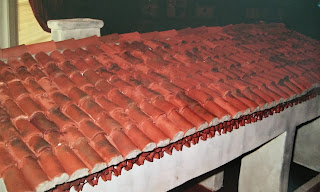 The aging and weathering process was continued on the main house roof, using the same colors. 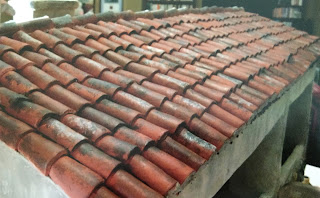 More color layers have been added to the roof tiles. I tried a bit of an orangey "Autumn Leaves" paint and a bit more "Sunflower Yellow" to simulate lichen. That didn't go well, so I covered those colors over with more stippled-on Raw Umber, Black, and the palest Gray. 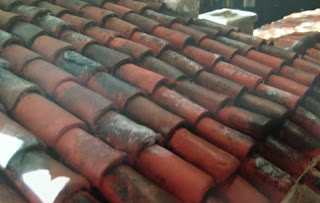 A close-up photo of the finished canal tiles. After I thought I was all finished, I decided to rub on some more of the "Oklahoma Joe" soot. And that was the final final touch!Those white spots in the left foreground are not caused by stray paint - just pure sunshine. 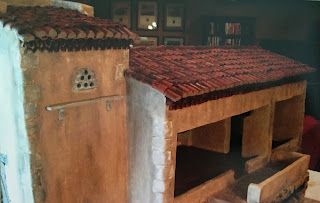 The farmhouse tiled roof meant a lot of work over a long period of time. (These blogposts make everything seem amazingly fast and easy. Do not believe that.) But, 1242 canal tiles later, I was so glad that I had persevered! My French farmhouse dream was closer to becoming reality.