I finally finished the everlasting sanding on the exterior of the farmhouse. Then came the everlasting cleaning up of the huge mess I made. It took me a long time to vacuum up all the joint compound dust; my work space looked as though a Nebraska blizzard had been through. I was on the final seconds of the job before I remembered that I hadn't taken a photo of the layers of white powder. So no photo. I guess that's an "Oh, Well…."

After the vacuuming was finished, I used wet paper towels to wipe down the exterior of the farmhouse, then I cleaned all the floors, the windows, the support beams, the porch, and the stairs. I don't treat my real-life house nearly so well! I also cleaned the excess joint compound off all the embedded stones in the two exterior end walls.

At last, the farmhouse was completely clean and ready for the exterior paint. 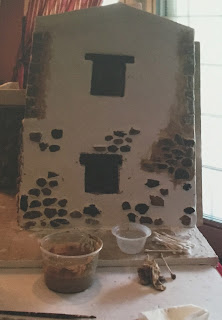 I started applying the base coat of paint to the east end of the farmhouse. And then I noticed a Weird Thing that I had not noticed before, in all my hours of working on that wall: THE WINDOWS DO NOT ALIGN. They don't align with anything. Not with each other, as they should; and not with the peak of the roof, as they should. How cattywampus could this be? Who built this crooked little house
anyway? So what did I do? First, I said, "OH NO!" Then I said, "Oh, Well…." 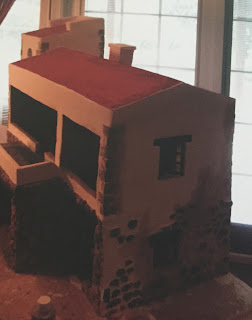 This is a very dark photo, but you can see that I was making some progress on applying the paint. 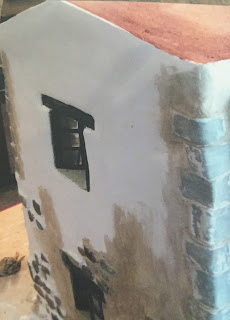 A lighter photo of that progress. 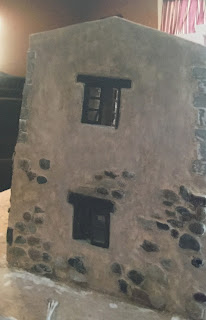 Painting the exterior walls was harder than I expected it to be; it was difficult to achieve the proper balance between "aged and weathered" and "just blotchy." But the base coat was finished on the east end…. 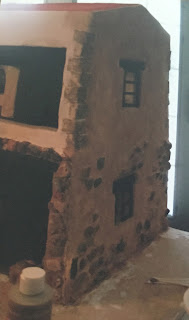 ….so I moved on around the corner to the front, then to points west, where I painted the base coat on the dovecote end of the house. 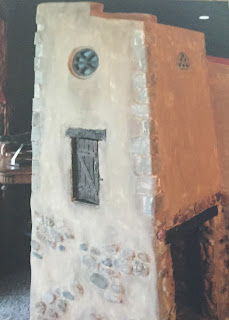 After the base coat was applied on all the walls, I began the "aging" process on the dovecote exterior, which involved rubbing on charcoal and soot to simulate the accumulated wear and weathering over many years. The dovecote was stubborn and tried to defy old age, as you can see in this photo. I had to repeat the process, adding on the years gradually. (Is that what they mean by "growing old gracefully?") 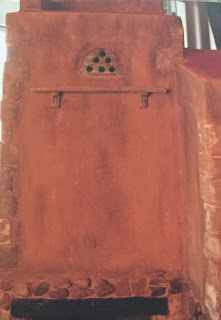 The dovecote front is a strange color here. Growing old did not cause that; my photographic skill caused that. But the dovecote had grown old enough to have the pigeons' landing ledge glued on. Watch out for incoming birds! 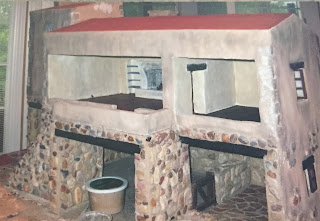 Old age must be contagious; now the front of the farmhouse was looking older, but still needed some additional years. 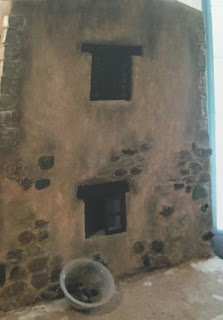 For the "aging" process, I used small chunks of black soot and charcoal from Robert's Oklahoma Joe smoker. I rubbed the black soot first on my index finger, then smoothed it out - also with my fingers. At times, I rubbed the sooty chunk directly onto the surface, like chalk, but that technique made lines that were hard to blend smoothly, so I did that only where necessary. By the time the farmhouse had grown gracefully old, I had grown a huge blister on my right index finger from rubbing that abrasive soot!
Working on this French farmhouse is SO MUCH FUN! 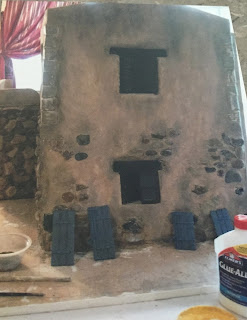 The farmhouse was now 140 years old; it was high time there were some shutters on those two malaligned windows. 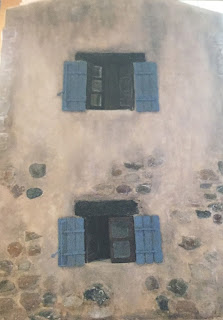 And………the shutters were on! They have actually been removed for painting and repair, then replaced a number of times over the years, so of course they now hang a bit drunkenly. But it's only to be expected that a malaligned window would have a malaligned
shutter. Isn't it?

And so we move on. We move on to the hardest - and the downright scariest - part of the farmhouse construction. Next week: Roof Tiles! YIKES!